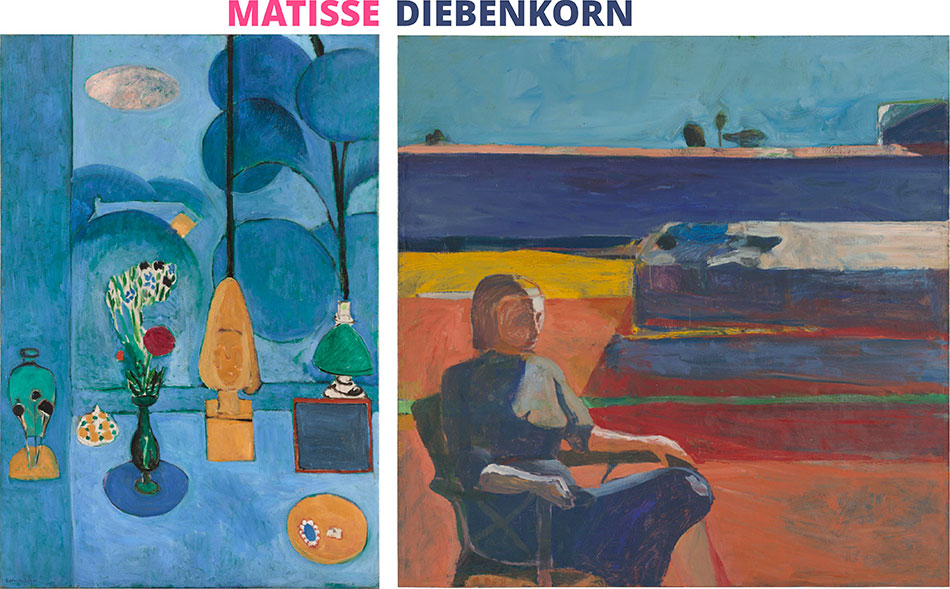 As a Stanford University art student in 1943, Diebenkorn first saw the work of Matisse at the Palo Alto home of Sarah Stein, one of the French painter’s earliest champions. When he was stationed with the Marines on the East Coast in 1944, he studied great works by Matisse in museums including The Museum of Modern Art in New York, The National Gallery of Art and The Phillips Collection in Washington D.C., where he made repeat visits to see Matisse’s Studio, Quai Saint-Michel (1916) 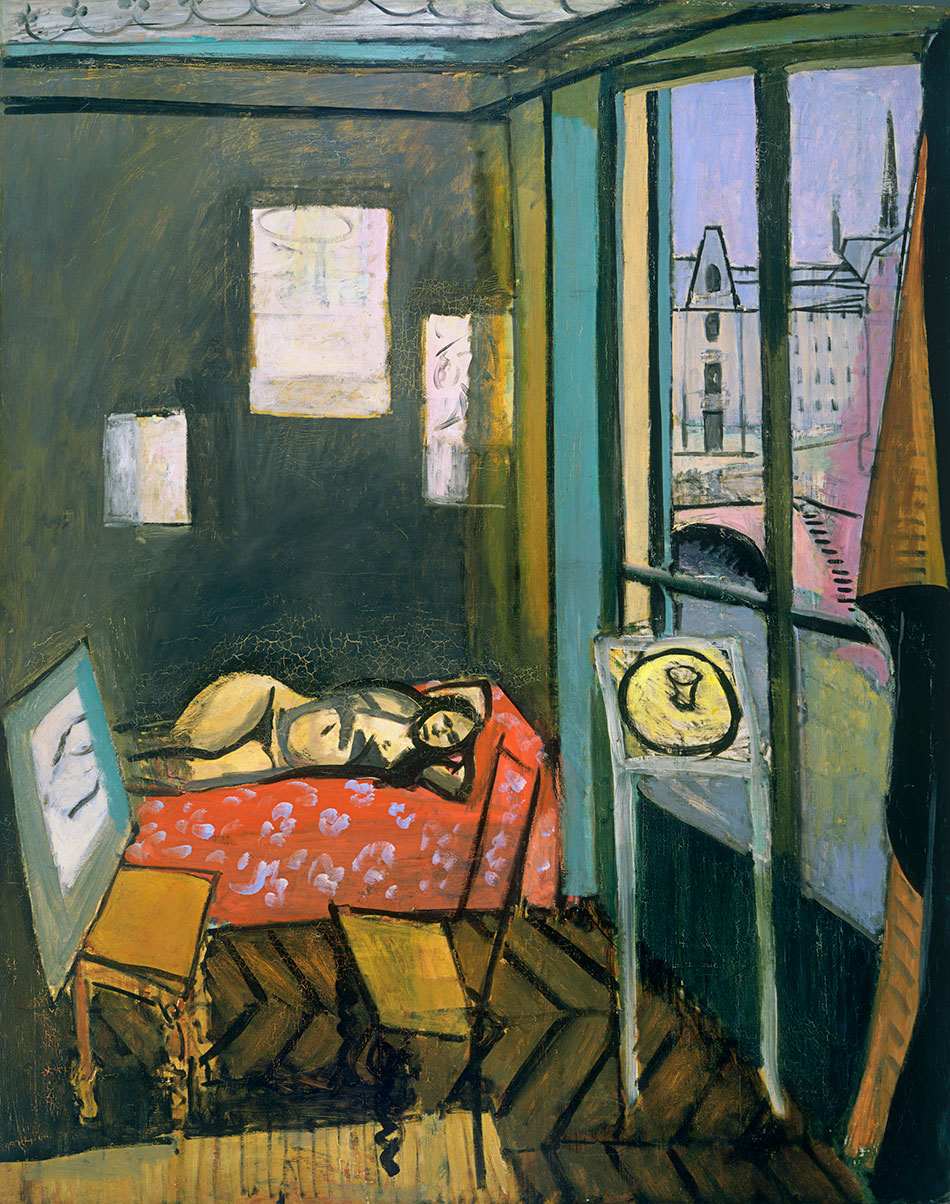 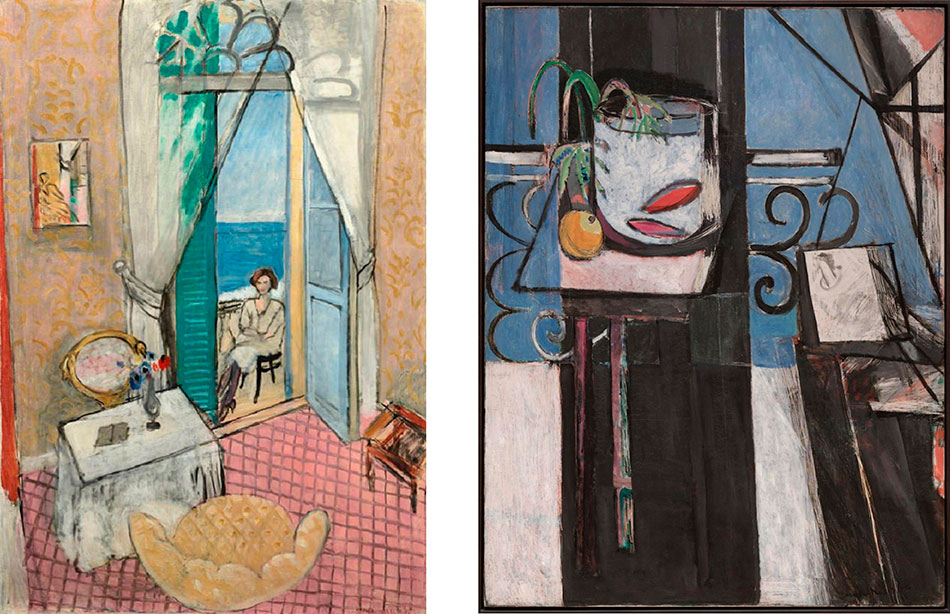 Diebenkorn’s first truly immersive experience
of Matisse’s work
Occurred in Los Angeles in 1952, when he encountered such important Matisse paintings as Goldfish and Palette (1914) and Interior at Nice (1919 or 1920) in a traveling retrospective. 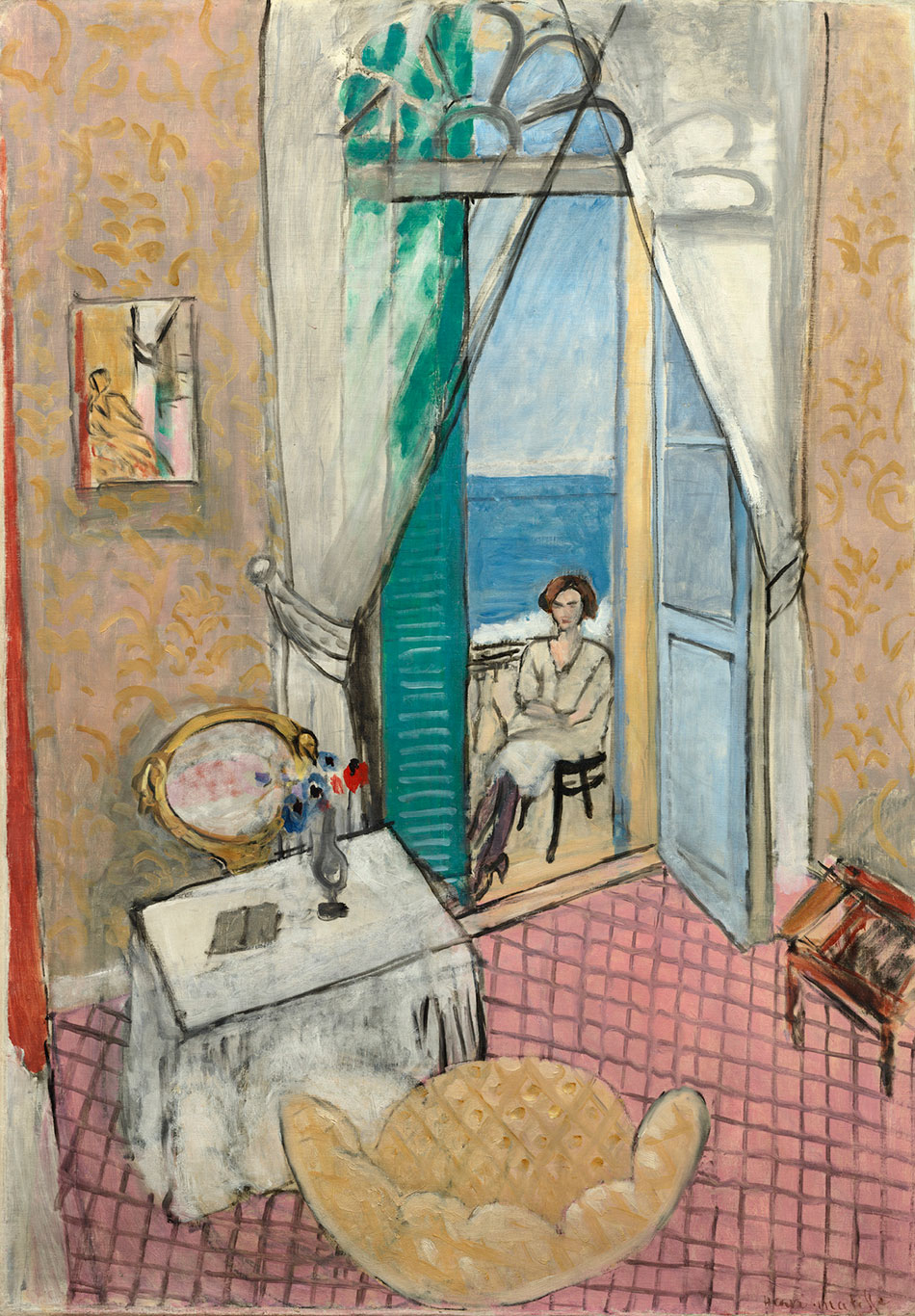 Shortly after seeing this exhibition—a decade since his first experience of Matisse’s work—Diebenkorn began to incorporate elements of the French painter’s approach to painting into his own compositions, which is reflected in the brighter palette and new interest in structure evident in Diebenkorn’s Urbana No. 5 (Beachtown) (1953) and Urbana No. 6 (1953). 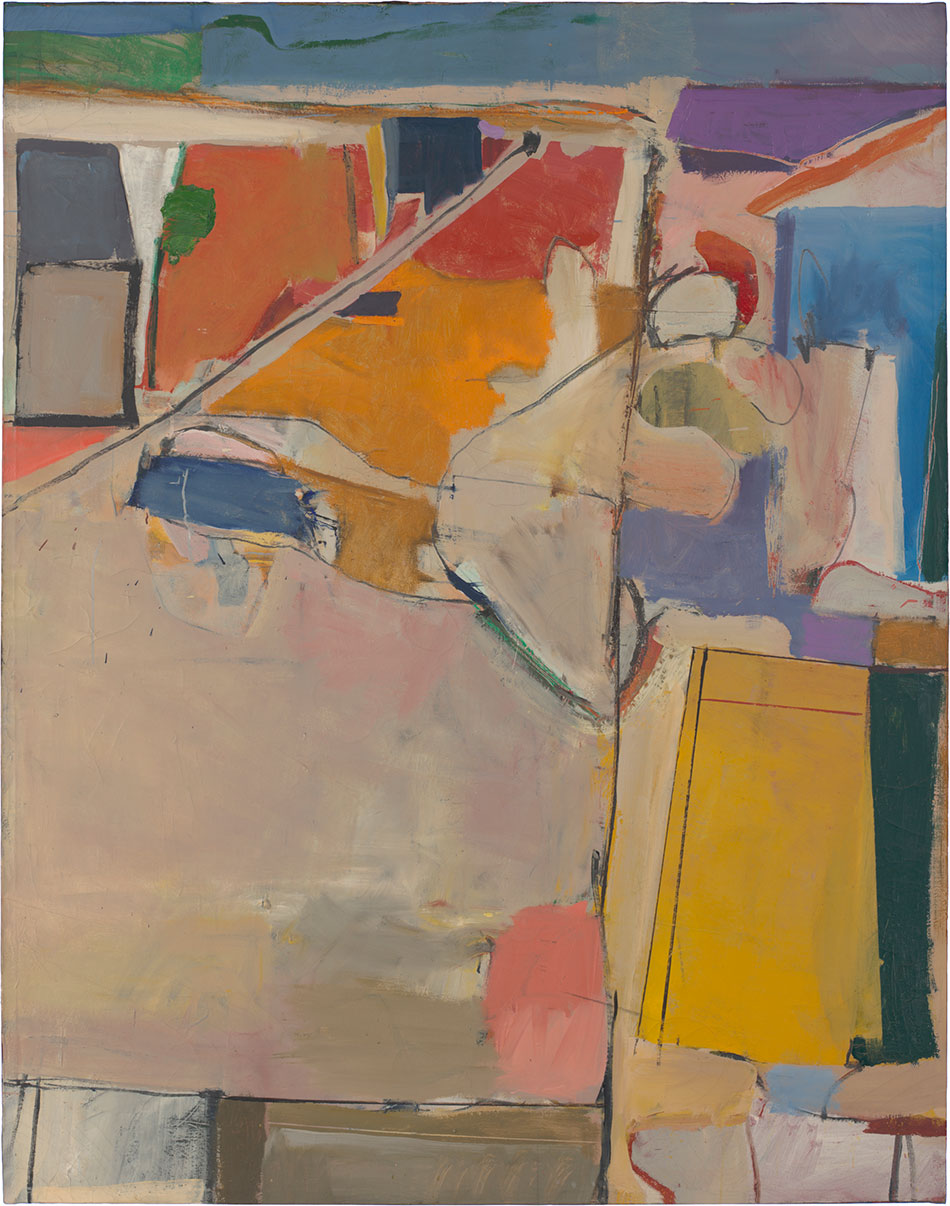 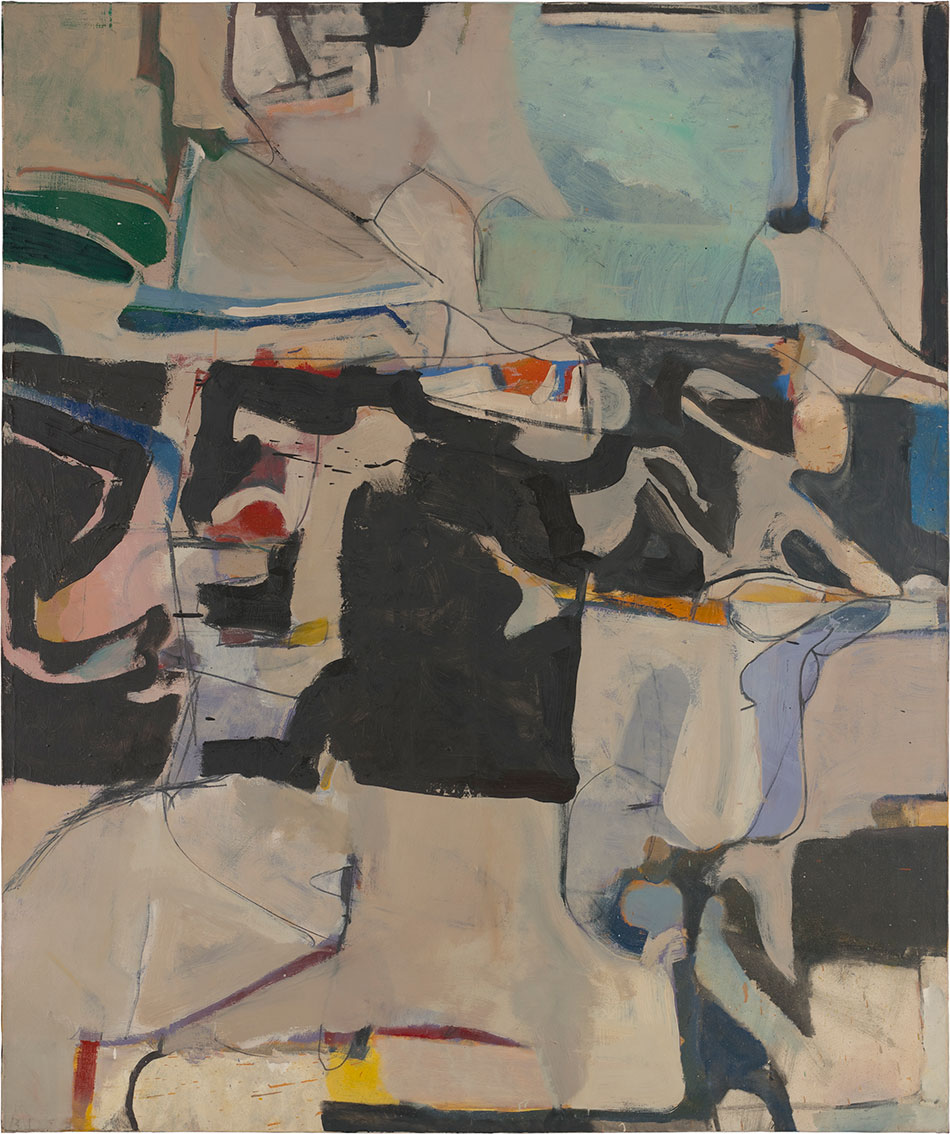 The opening galleries of the exhibition feature outstanding works from Diebenkorn’s Urbana and Berkeley periods (1953–1955) that demonstrate the significant impact of his early encounters with Matisse on his then predominantly abstract paintings. 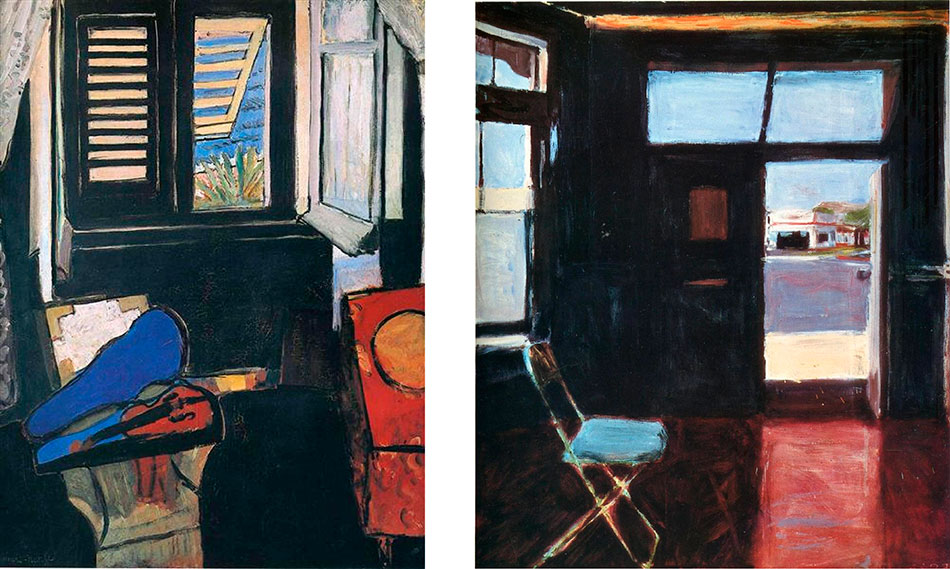 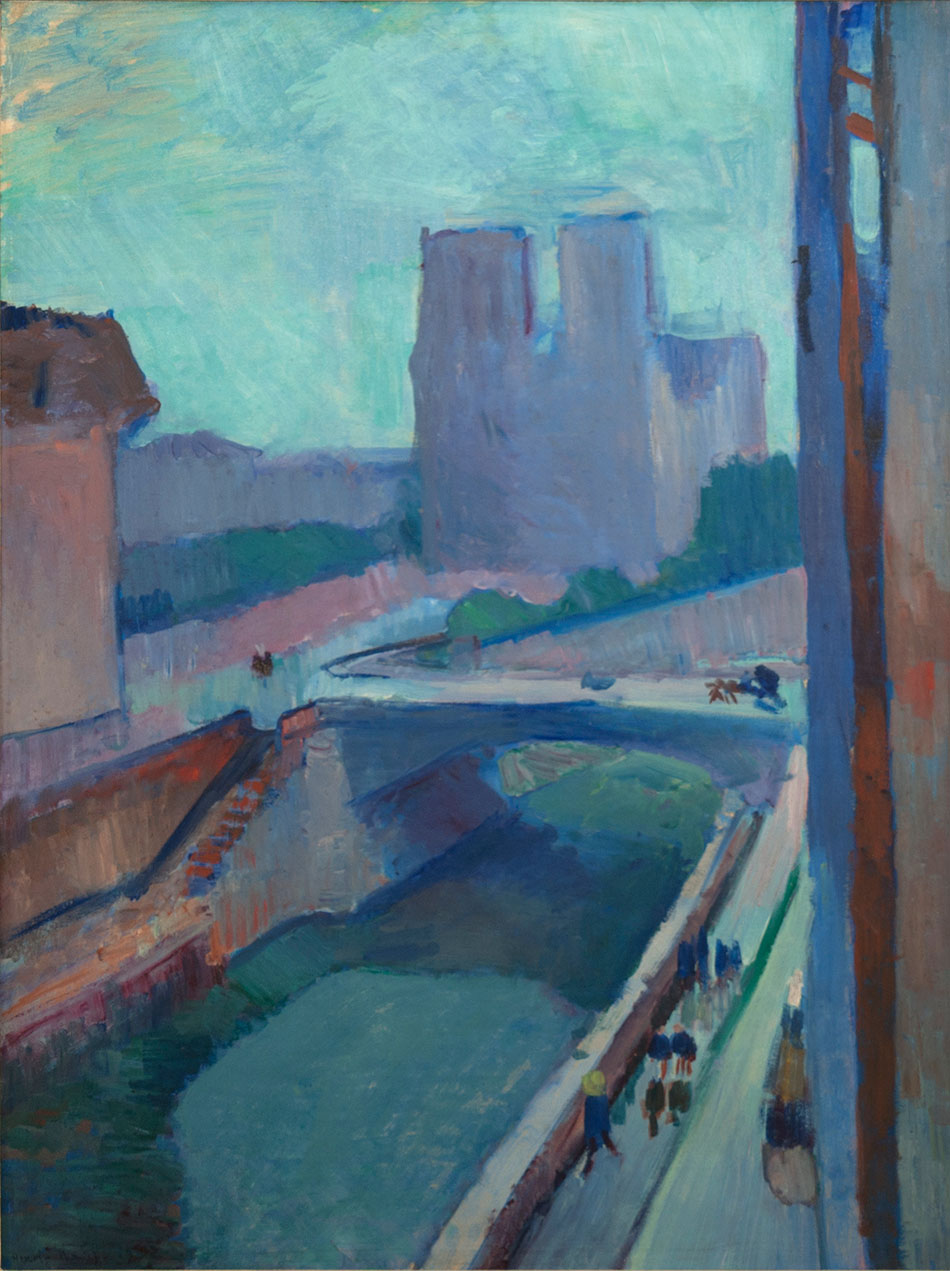 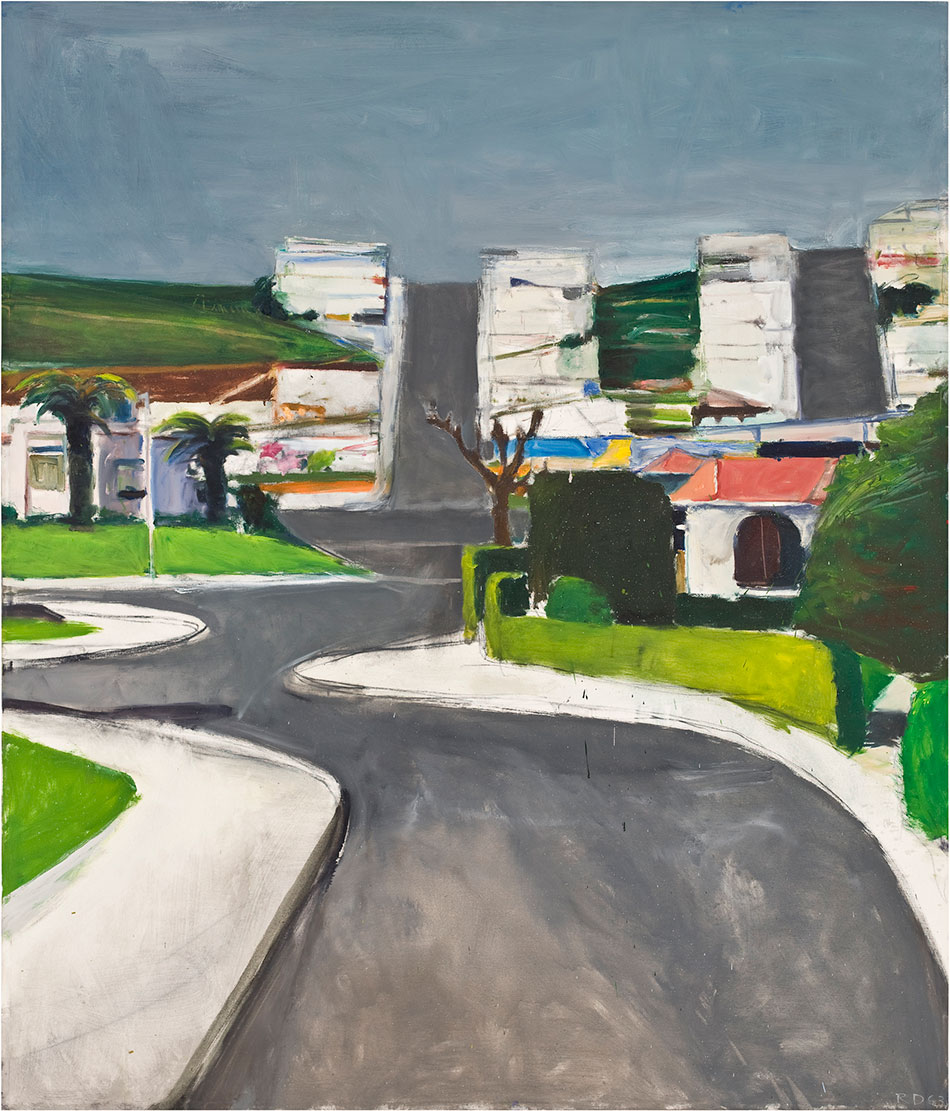 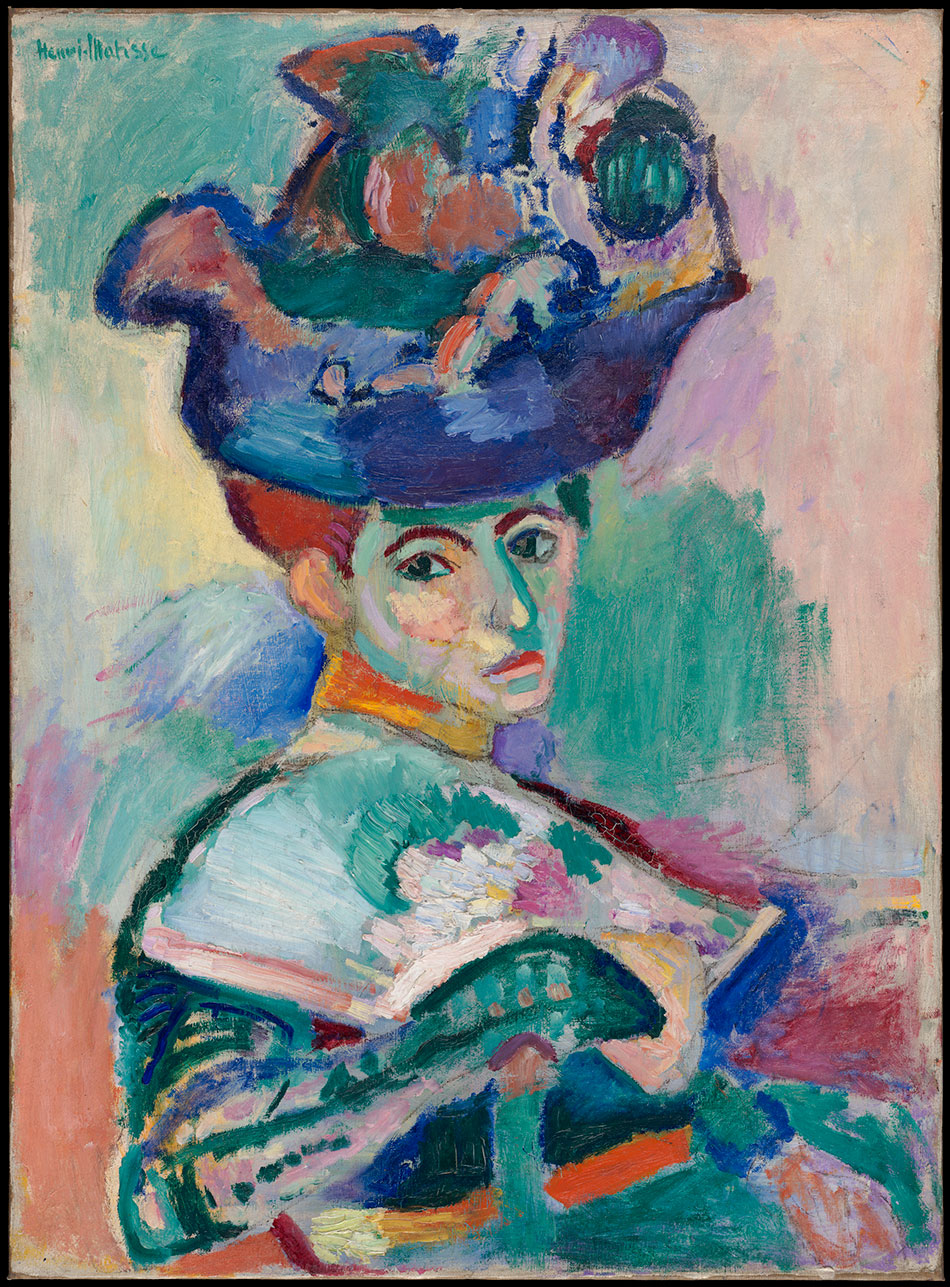 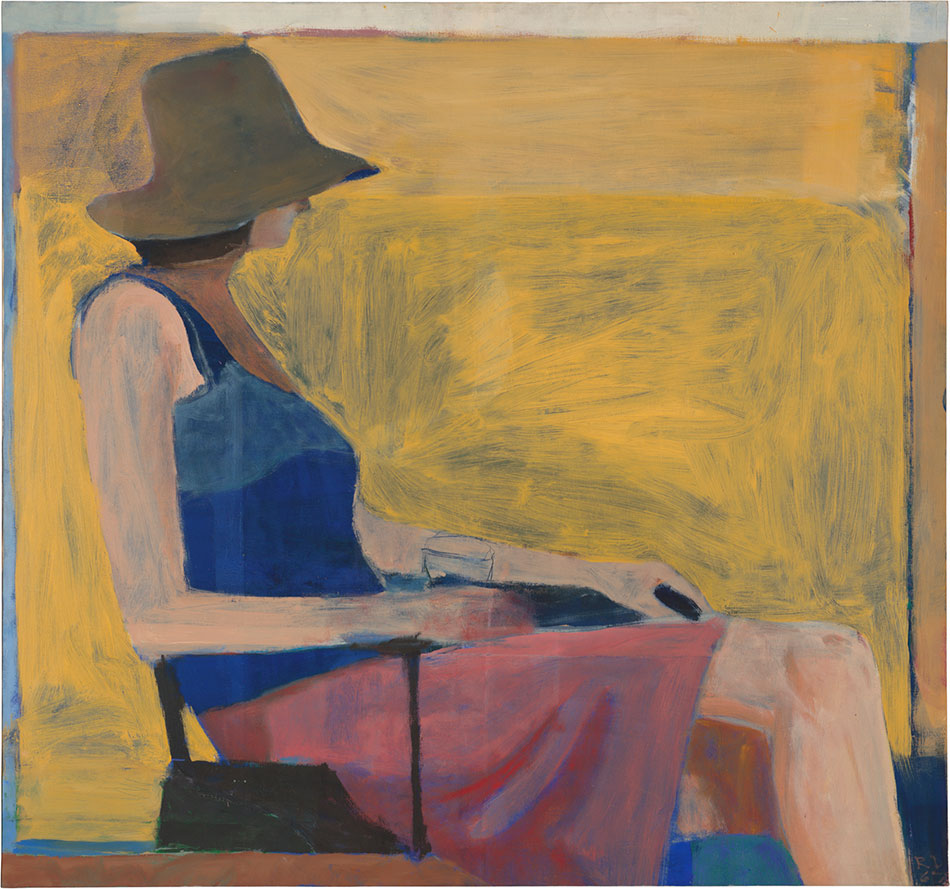 Throughout his later career, Diebenkorn continued to seek out Matisse’s example, most notably during a trip to the Soviet Union in 1964, where he saw the extensive collections of works by Matisse in the State Hermitage Museum and the Pushkin Museum. This experience resulted in a number of canvases from the end of Diebenkorn’s representational period that pay direct homage to the French artist, including Recollections of a Visit to Leningrad (1965) and Large Still Life (1966), which both feature the sort of ornate patterned wallpaper or textiles favored by Matisse. 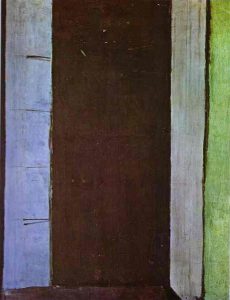 This trip was followed by a visit two years later to another Matisse retrospective in Los Angeles where he saw nearly 350 works by the French artist. View of Notre Dame (1914) and French Window at Collioure (1914), two highly significant, nearly abstract Matisse paintings that Diebenkorn saw in the Los Angeles retrospective will be included in the exhibition. 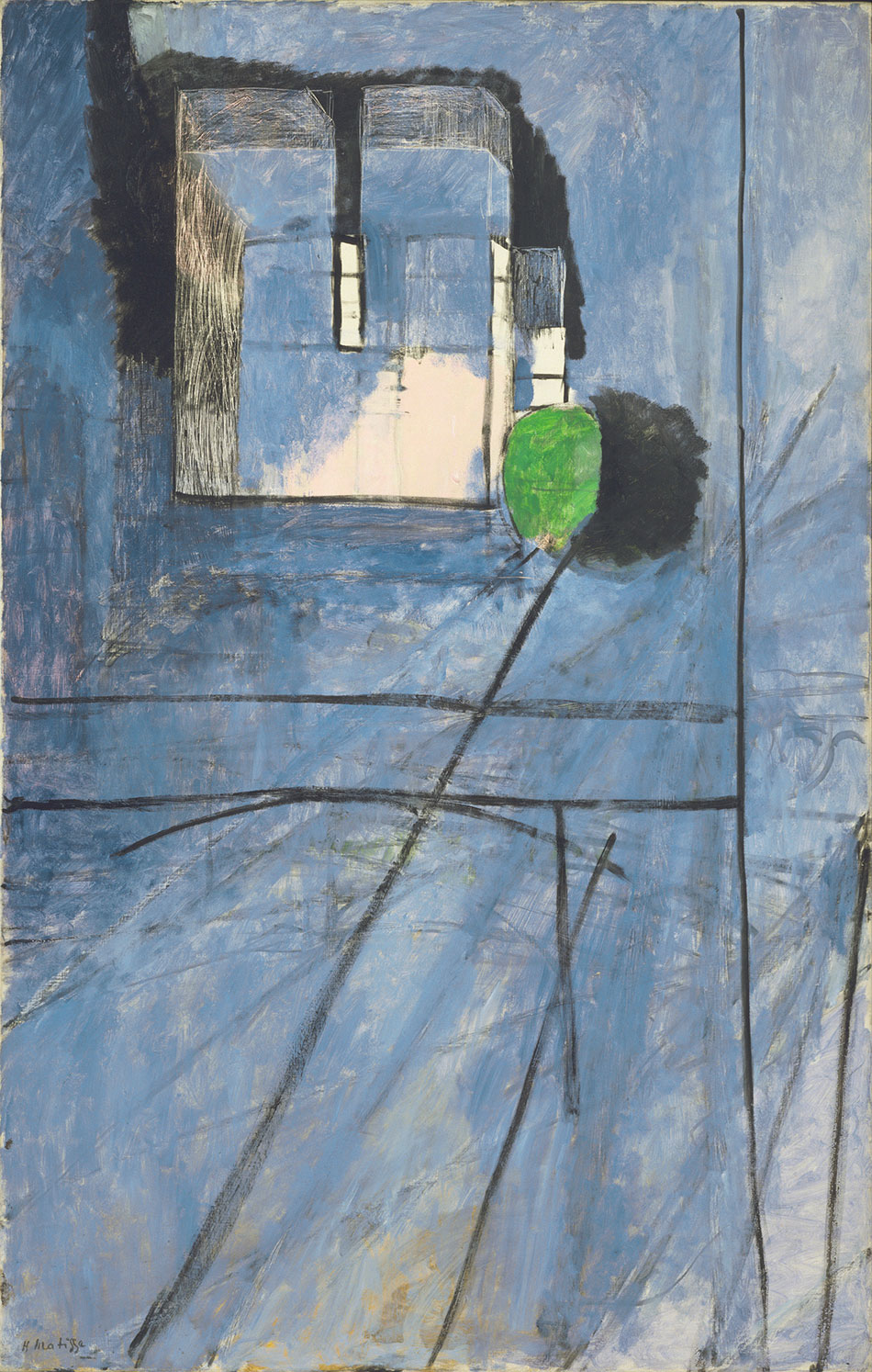 Diebenkorn moved to Southern California in 1966, and established a studio in the Ocean Park neighborhood of Santa Monica. Shortly thereafter, he returned to abstraction, producing the color- and light-filled abstract compositions for which he is best known, ranging from the transitional Ocean Park #6 (1968), which retains vestiges of the human body, to the luminous Ocean Park #79 (1975). 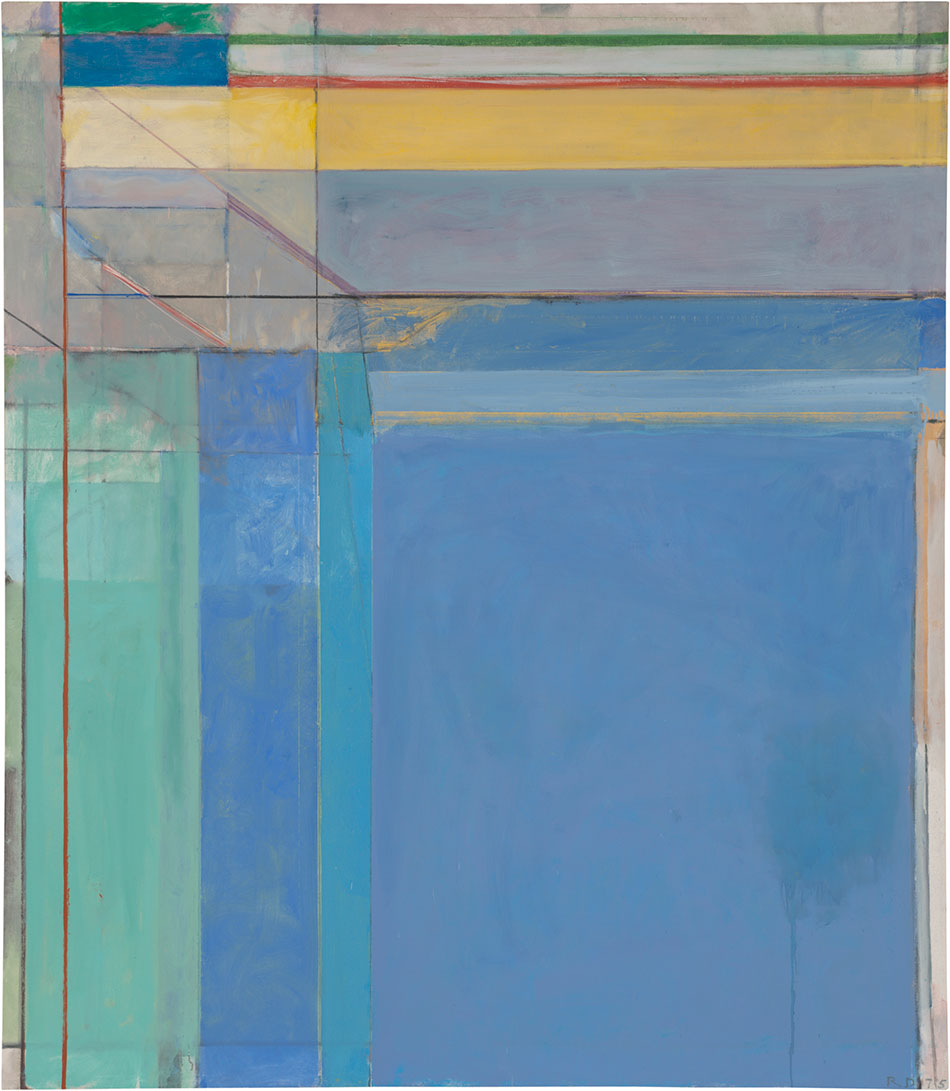 Richard Diebenkorn, Ocean Park #79, 1975; oil on canvas; Philadelphia Museum of Art, purchased with a grant from the National Endowment for the Arts and with funds contributed by private donors; © the Richard Diebenkorn Foundation 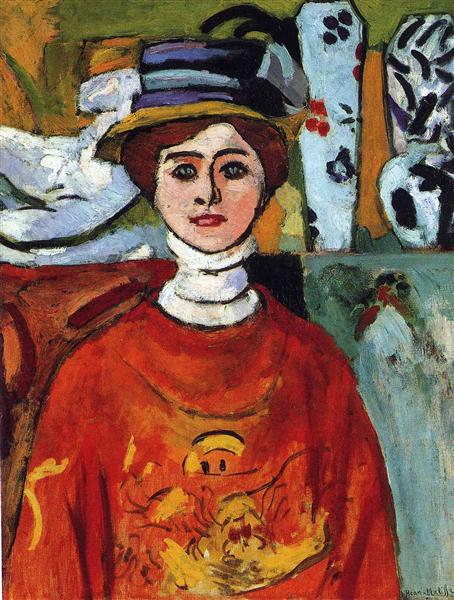 Throughout this period as well, the impact Matisse had on Diebenkorn is evident in the color, geometric structure and evidence of process. Matisse/Diebenkorn will conclude with Ocean Park paintings from this period of Diebenkorn’s career (1968–1980), juxtaposed with a selection of Matisse’s most influential works including the 1914 canvases mentioned above, which Diebenkorn acknowledged as especially important to him, as well as other paintings that were part of Matisse’s 1966 retrospective, such as The Girl with Green Eyes (1908). 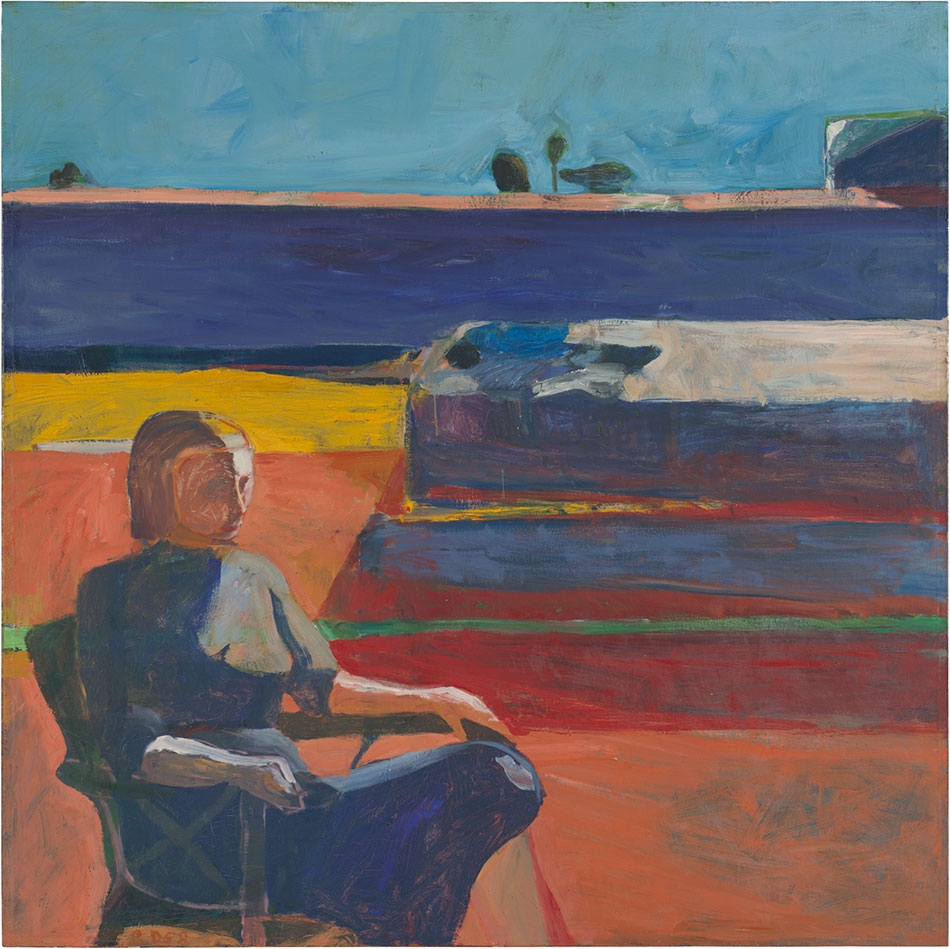 Richard Diebenkorn, Woman on a Porch, 1958; oil on canvas; New Orleans Museum of Art, museum purchase through the National Endowment for the Arts Matching Grant; © the Richard Diebenkorn Foundation 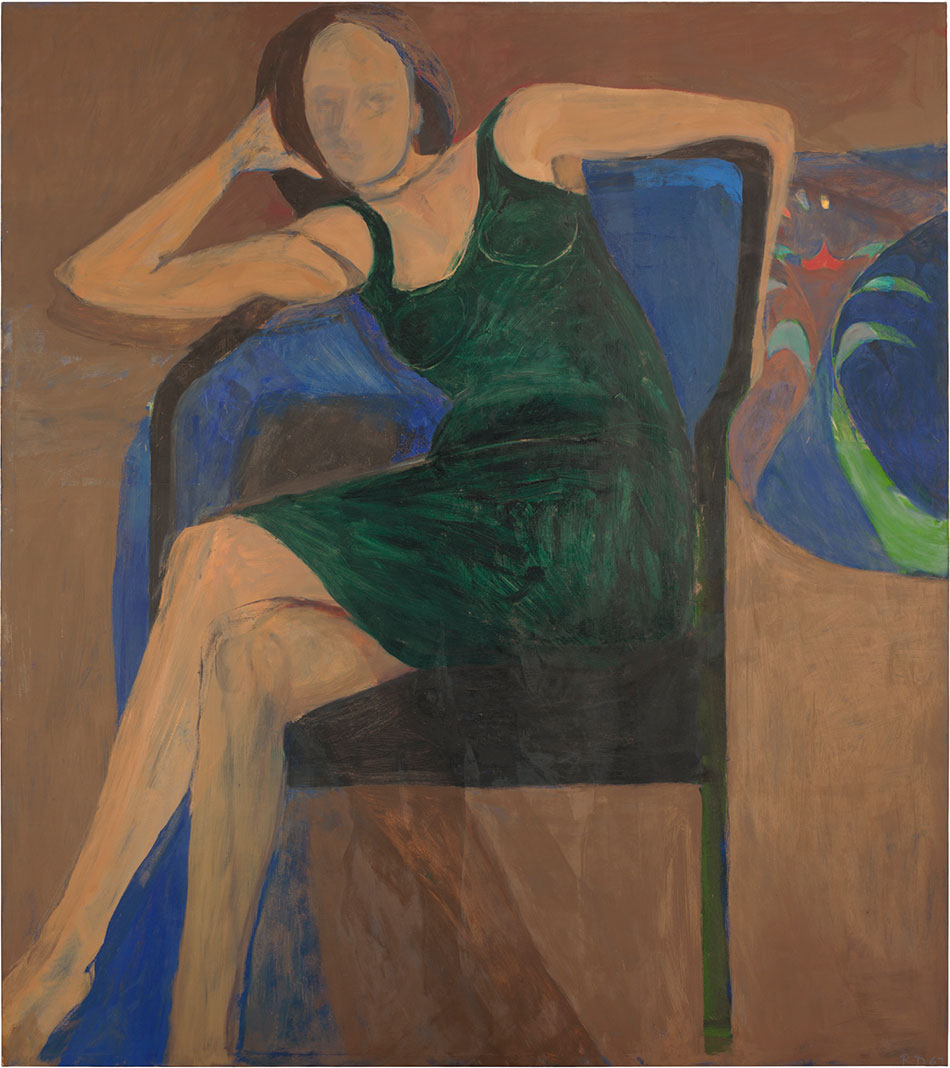 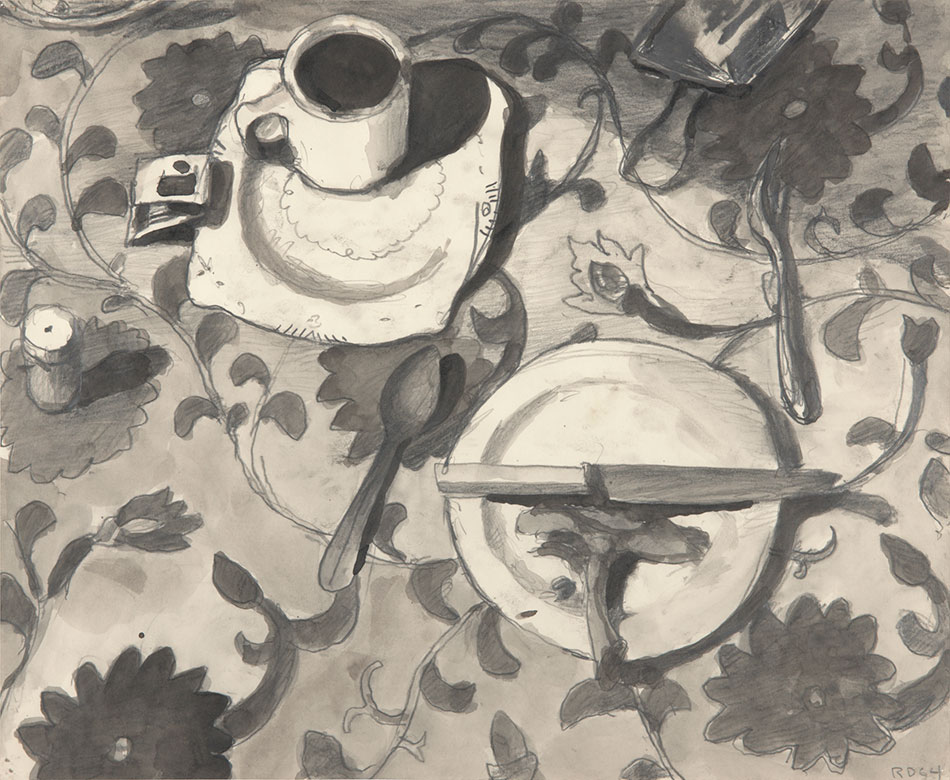 Matisse
Although they never met, both artists have a longstanding history in the Bay Area and deep connections to SFMOMA. Matisse’s expressive paintings were first introduced to San Francisco shortly after the 1906 earthquake, shocking the arts community with their startling colors and brushwork.
The French artist made one visit to San Francisco, in 1930, and his very first West Coast survey was held at SFMOMA in 1936, a year after the museum was founded. Matisse’s work—specifically Woman with a Hat (1905), on view in the exhibition—has become a historical anchor of SFMOMA’s painting and sculpture collection. 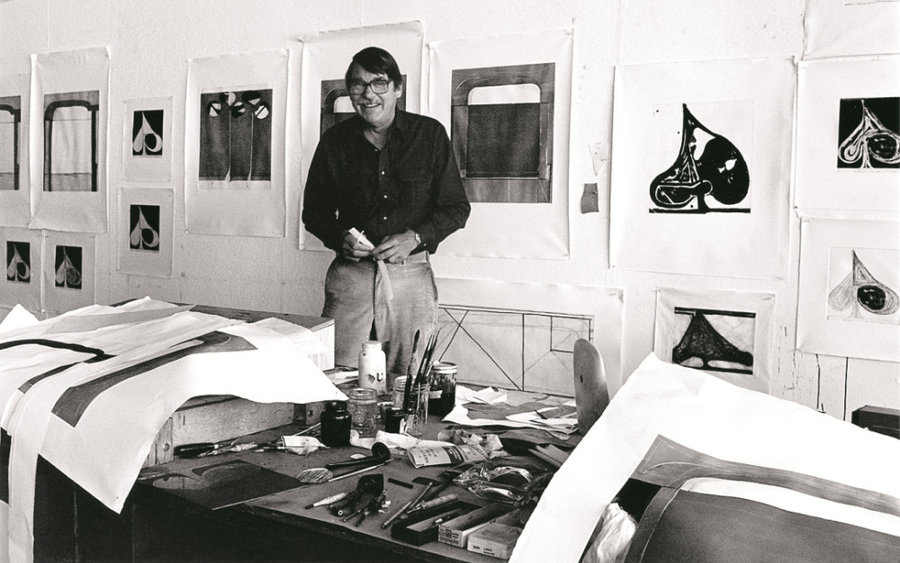 Continuing the exploration of artistic inspiration, an adjacent coda gallery will feature work by contemporary artists that relate to Matisse and Diebenkorn, including Rachel Harrison, Elizabeth Peyton and others. 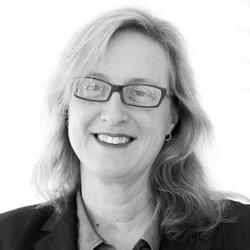 “Matisse/Diebenkorn is an incredible story of artistic inspiration, revealing how Diebenkorn’s enduring fascination with Matisse informed his own body of work in substantive and often surprising ways,”
“The exhibition casts new light on two artists represented in depth in SFMOMA’s holdings, and in fact several of the Matisse paintings now in our collection were among the very first paintings by the French artist that Diebenkorn ever saw.” 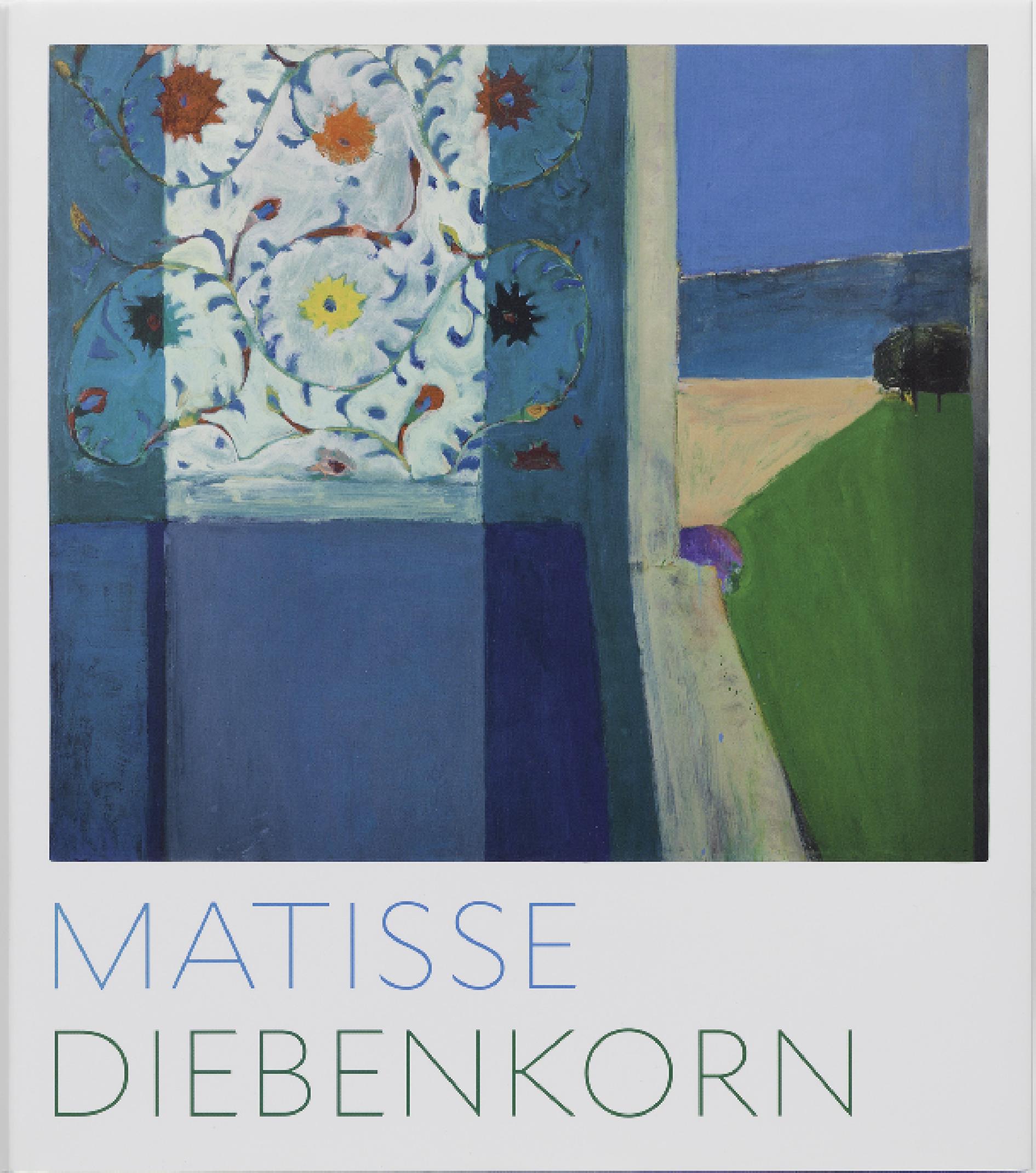 The exhibition is accompanied by a fully illustrated catalogue that charts the evolution of Matisse’s impact on Diebenkorn during the course of Diebenkorn’s career.
Essays by Matisse/Diebenkorn cocurators Janet Bishop, Thomas Weisel Family Curator of Painting and Sculpture at SFMOMA, and Katy Rothkopf, Senior Curator of European Painting and Sculpture at The BMA, are rounded out by an introduction by John Elderfield, Allen R. Adler, Class of 1967, Distinguished Curator and Lecturer at the Princeton University Art Museum and Chief Curator of Painting and Sculpture Emeritus at The Museum of Modern Art, New York, who has curated groundbreaking exhibitions on both artists; an essay on Diebenkorn’s drawings by Jodi Roberts, Halperin Curator of Modern and Contemporary Art at the Iris & B. Gerald Cantor Center for Visual Arts at Stanford University; and a bibliography documenting Diebenkorn’s collection of books about Matisse.
The catalogue is published by SFMOMA and The BMA in association with DelMonico Books/Prestel.
Photo by Don Ross

Matisse/Diebenkorn is organized by the San Francisco Museum of Modern Art and The Baltimore Museum of Art.
The Presenting Sponsor is the Evelyn D. Haas Exhibition Fund.
The Major Sponsors are Barbara and Gerson Bakar, Bank of America, Doris Fisher, The Henry Luce Foundation, Susan and Bill Oberndorf, and the Terra Foundation for American Art.
Generous support is provided by Gay-Lynn and Robert Blanding, Roberta and Steve Denning, Jean and James E. Douglas, Jr., Mary J. Elmore, Patricia W. Fitzpatrick, the Elaine McKeon Endowed Exhibition Fund, Deborah and Kenneth Novack, the Bernard and Barbro Osher Exhibition Fund, the Prospect Creek Foundation, Arun and Rummi Sarin, Lydia Shorenstein, Susan and Jim Swartz, Thomas W. Weisel and Janet Barnes, Bobbie and Mike Wilsey, and Kay Harrigan Woods. The exhibition is supported by an indemnity from the Federal Council on the Arts and Humanities and by an award from the National Endowment for the Arts. 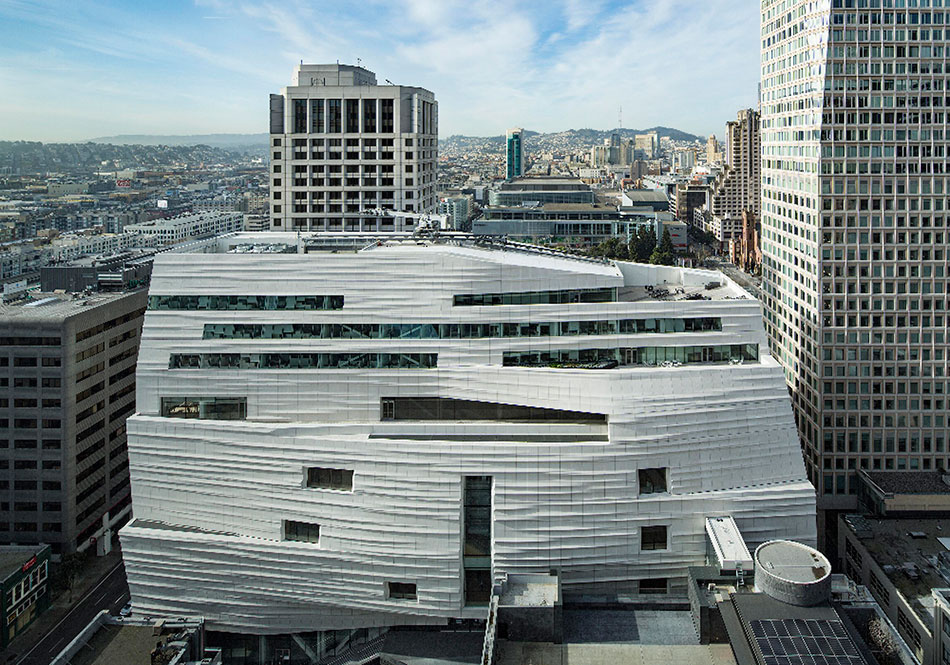