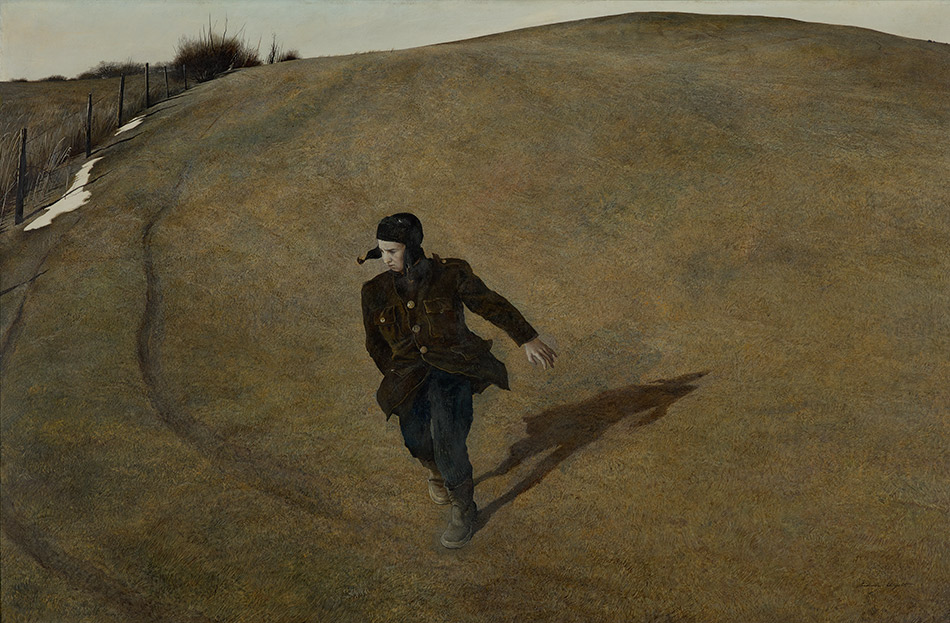 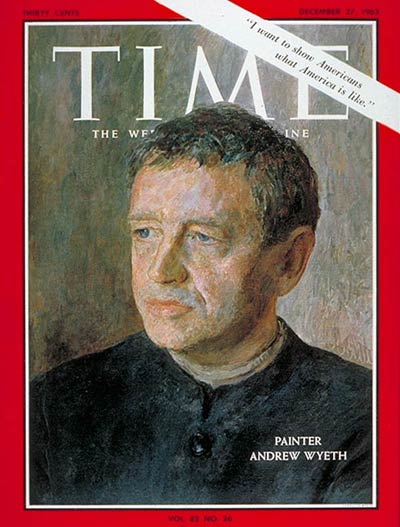 Major exhibition presents through 110 paintings and drawings, radical reimagining of one of the 20th century’s most complicated artists.
“In Retrospect” reflects on Wyeth’s work through the historical lens of a century in which he deviated from the American art mainstream but continued to figure prominently in much of the country’s artistic discourse.

The exhibition, explores groundbreaking perspectives on the art and legacy of the American painter’s 75-year career. Organized by the Seattle Art Museum with the Brandywine River Museum of Art for the 100th anniversary of the artist’s birth, the exhibition brings together paintings and drawings ranging from the late 1930s to 2008, including rarely seen loans from the Wyeth family. 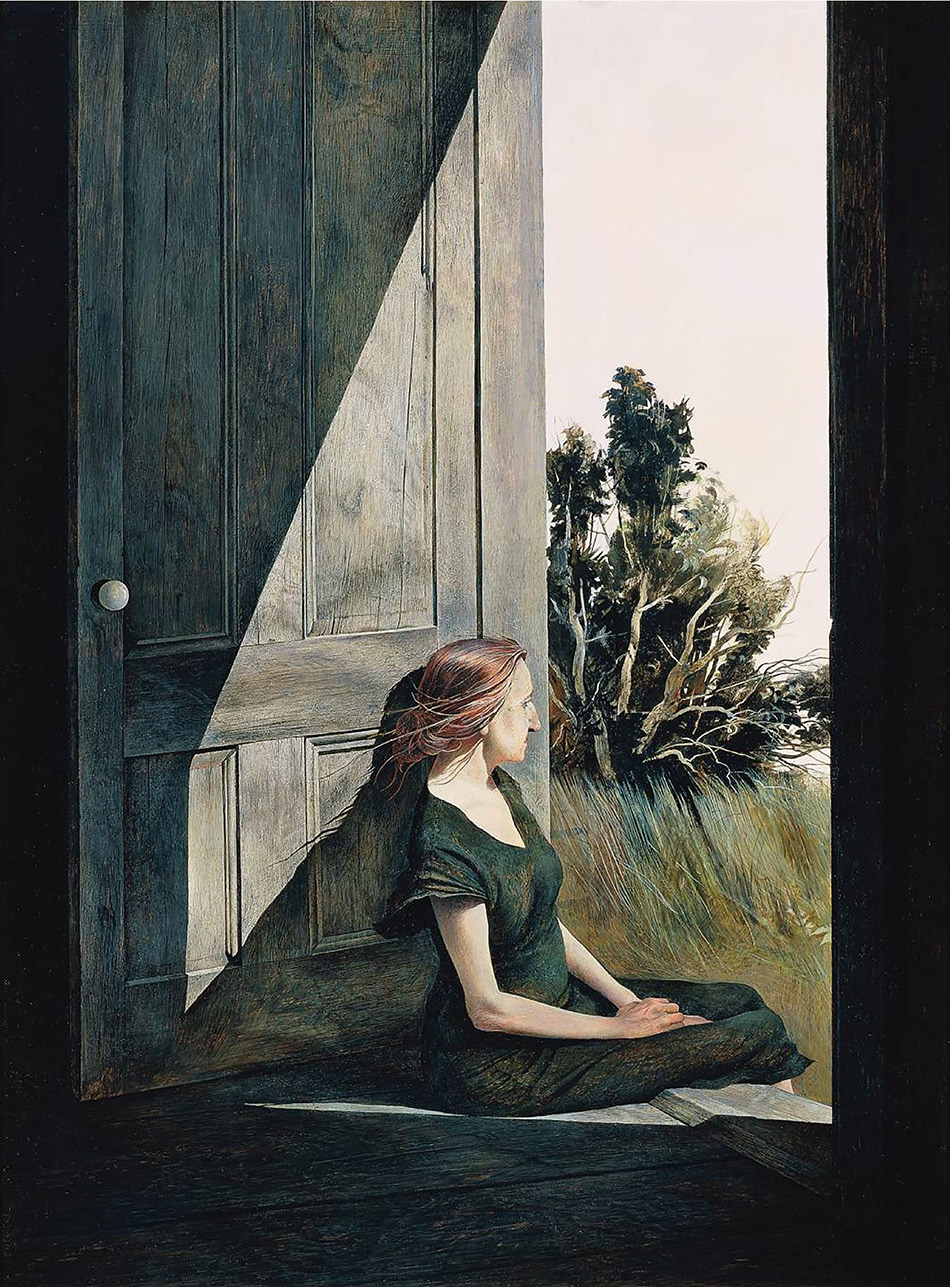 “In Retrospect” opens with a gallery of significant works introducing the cast of characters from Wyeth’s world who feature in some of his most famous portraits, such as Christina Olson of Maine and Karl Kuerner, his neighbor in Chadds Ford, Pennsylvania.
These dream-like works complicate long-held critical notions of Wyeth as an out-of-step realist, revealing how he imbued images of the places, people, and things around him with his own mysterious temperament. 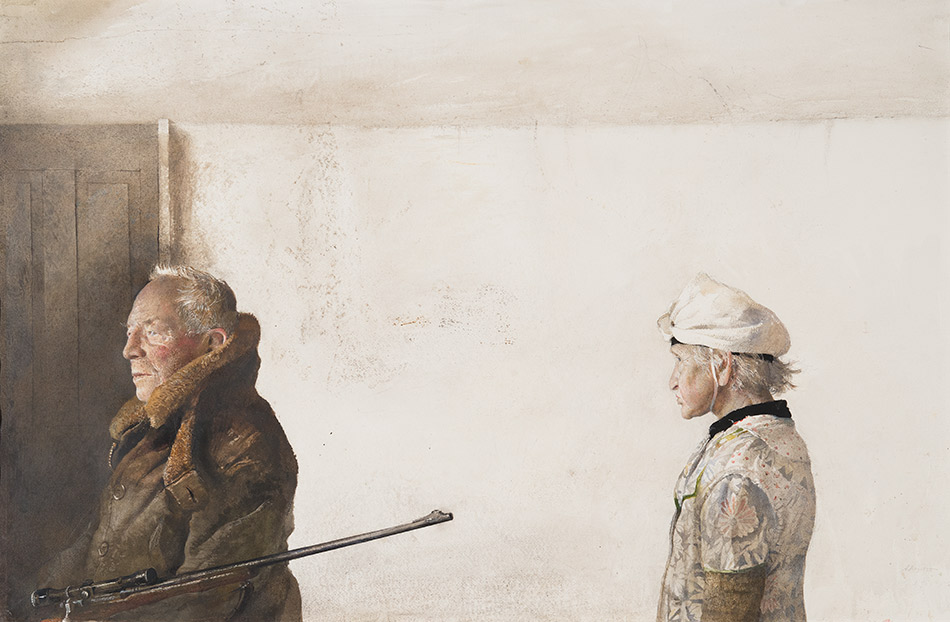 After the first gallery, the exhibition is organized in rough chronological order, tracing Wyeth’s development from his earliest watercolors, to more staged works of the 1940s-50s, and to deeper technical experimentation in the 1950s-60s, incorporating elements of chance. These include the artist’s little-known portraits of African Americans from the Chadds Ford community. The exhibition also offers a rare view into Wyeth’s artistic and technical process, presenting studies in a variety of media in an intimate tabletop display. 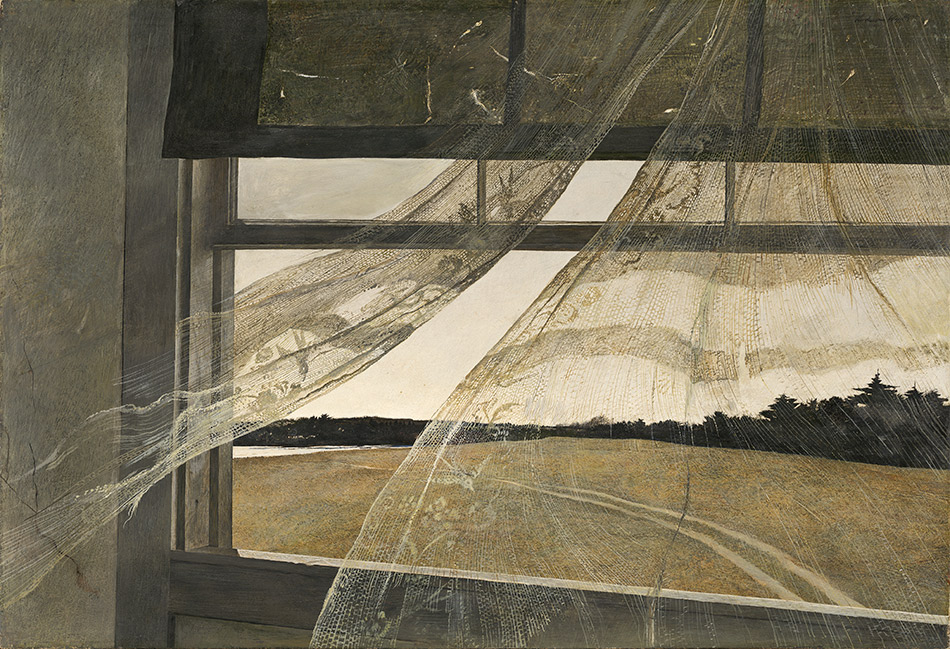 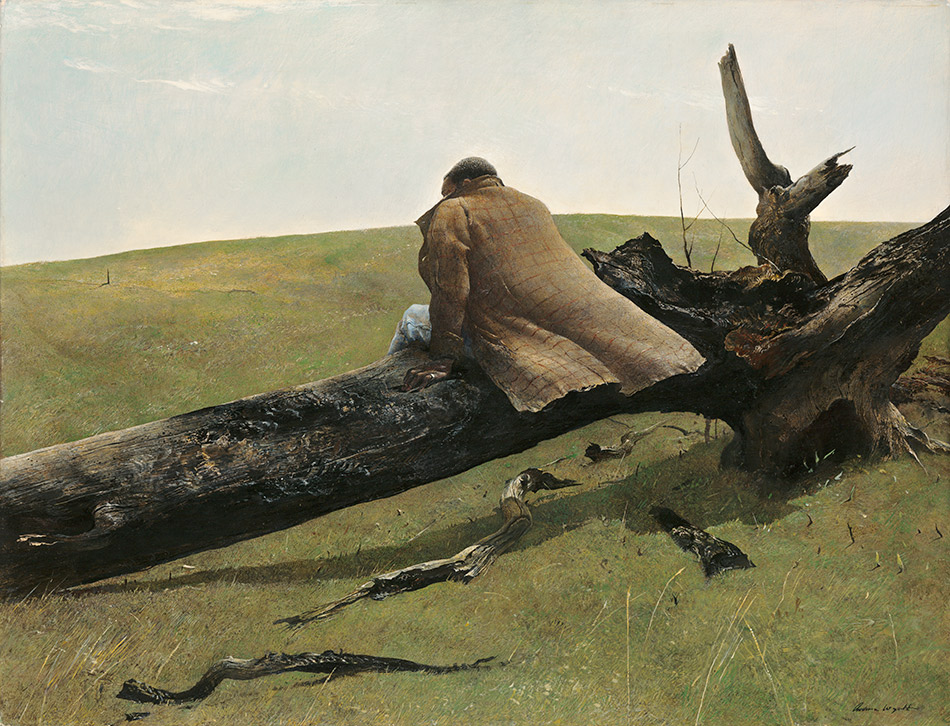 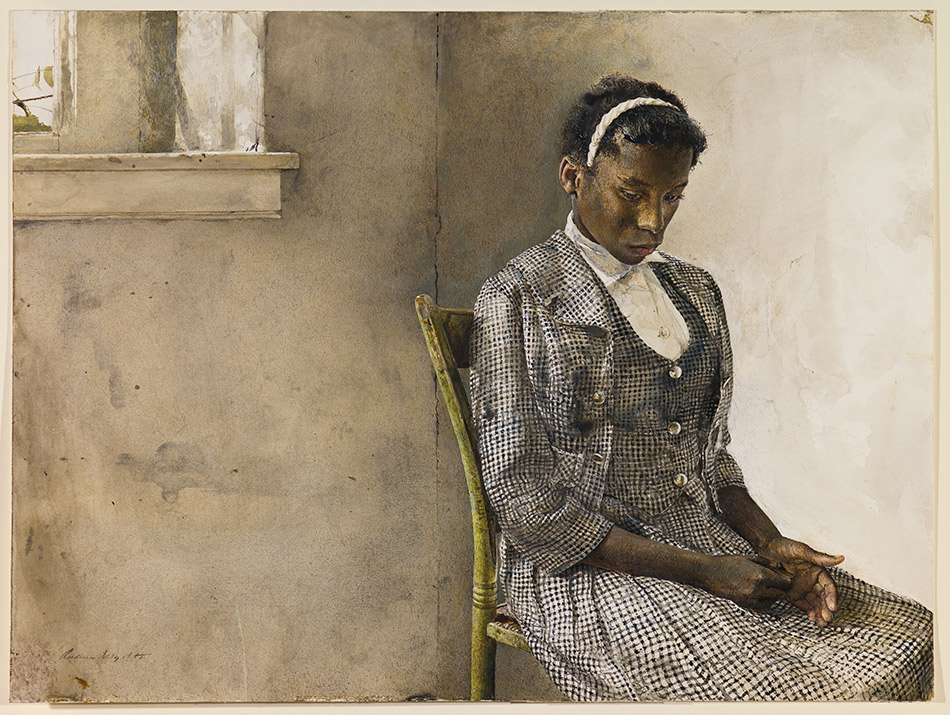 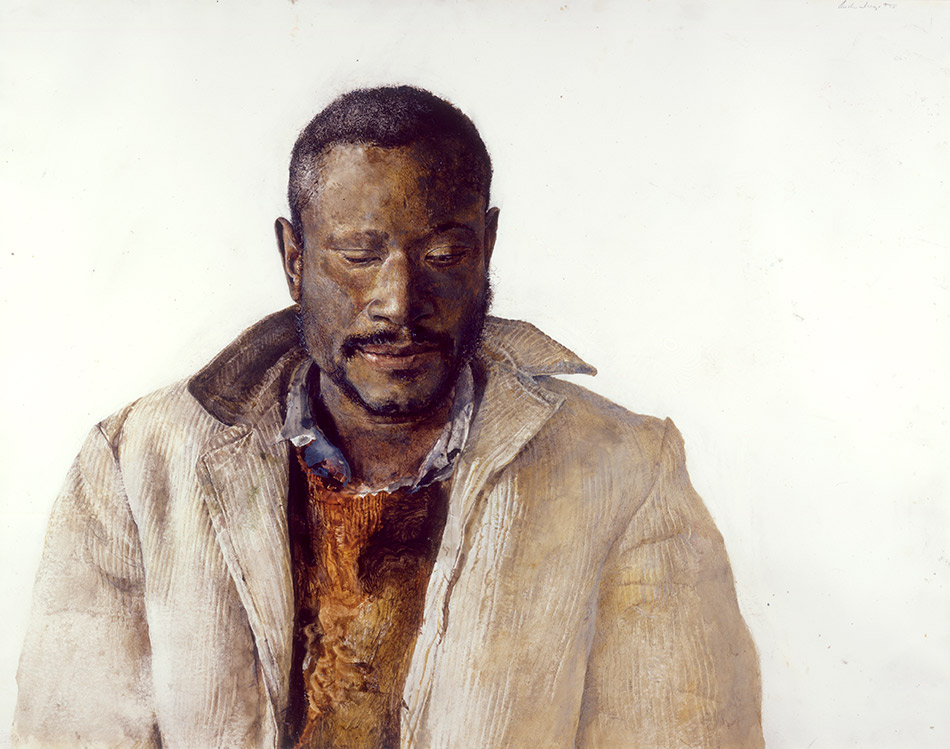 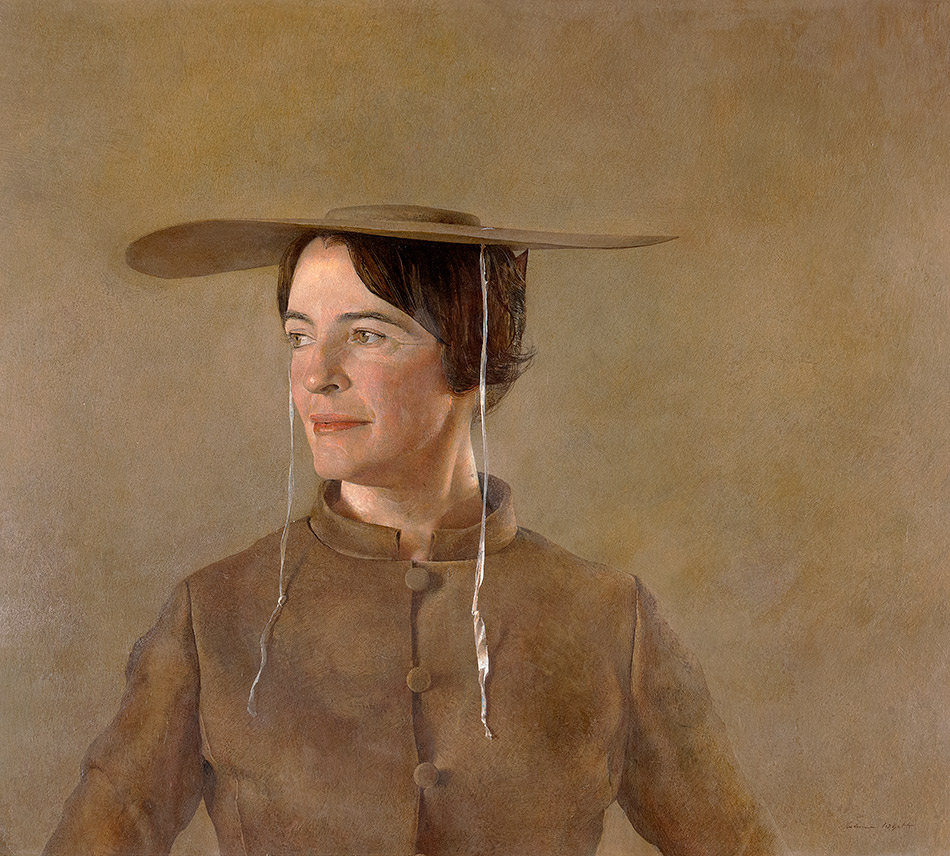 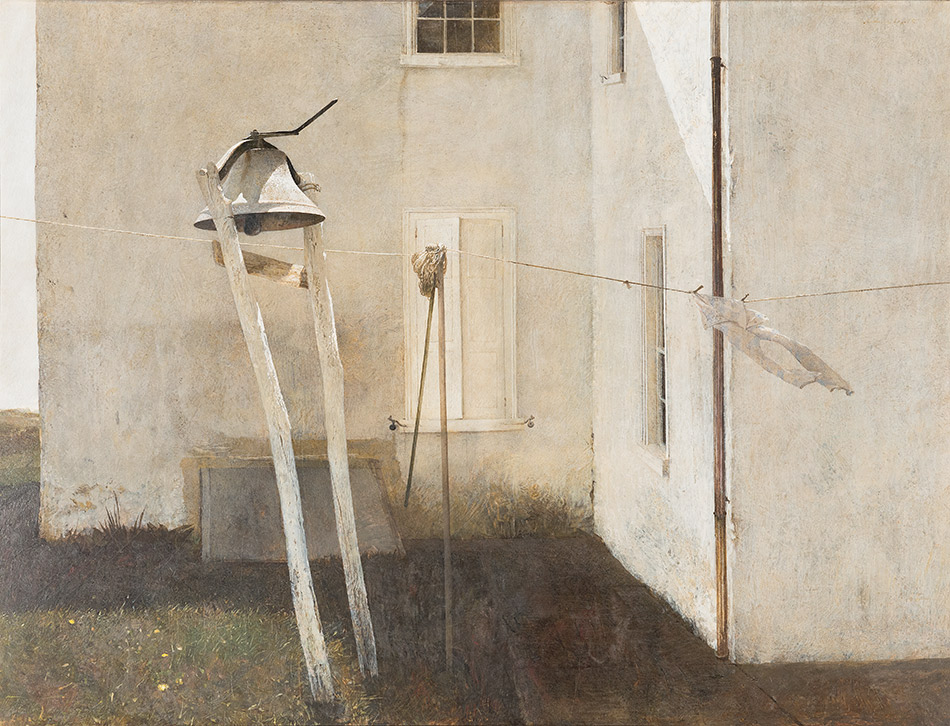 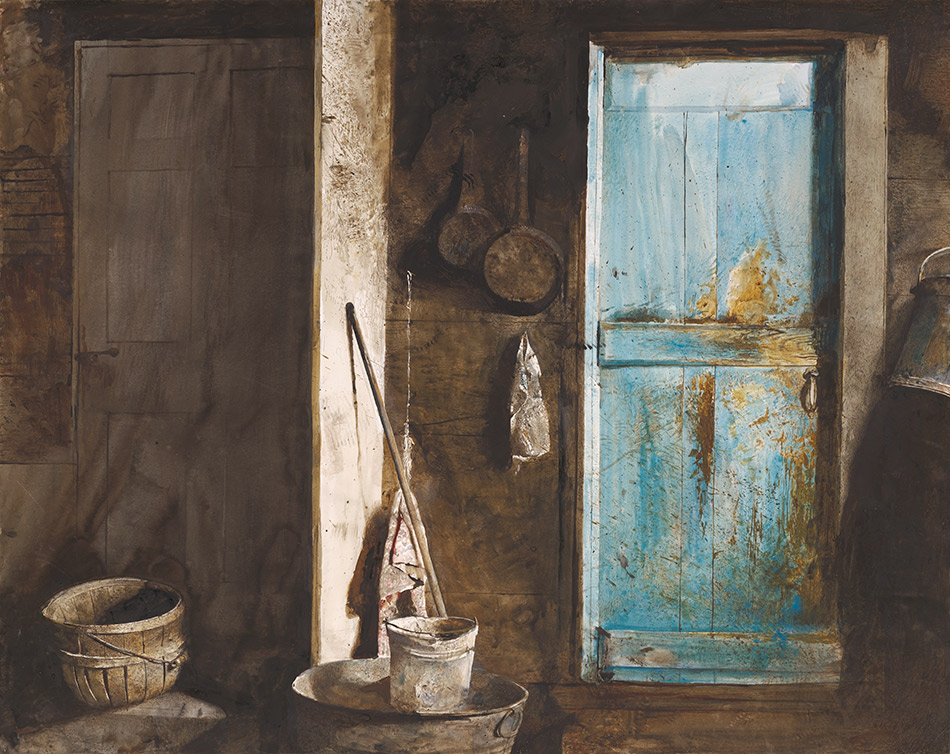 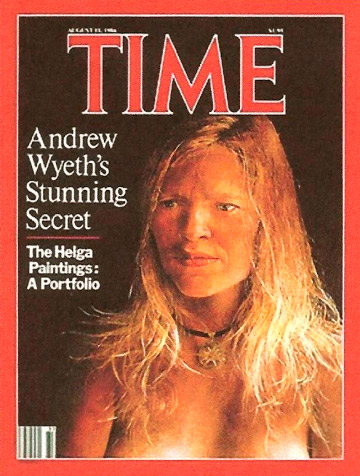 These are adjacent to Wyeth’s nude portraits of the Kuerners’ nurse Helga Testorf, created in secret at the same time and kept hidden for decades.
1986. Time Magazine cover on Helga Testorf

Also from this era are complex, more abstract paintings that stand out against the rest of Wyeth’s oeuvre, including Thin Ice (1969), an early work on loan from a private collection in Japan being shown for the first time on the West Coast. 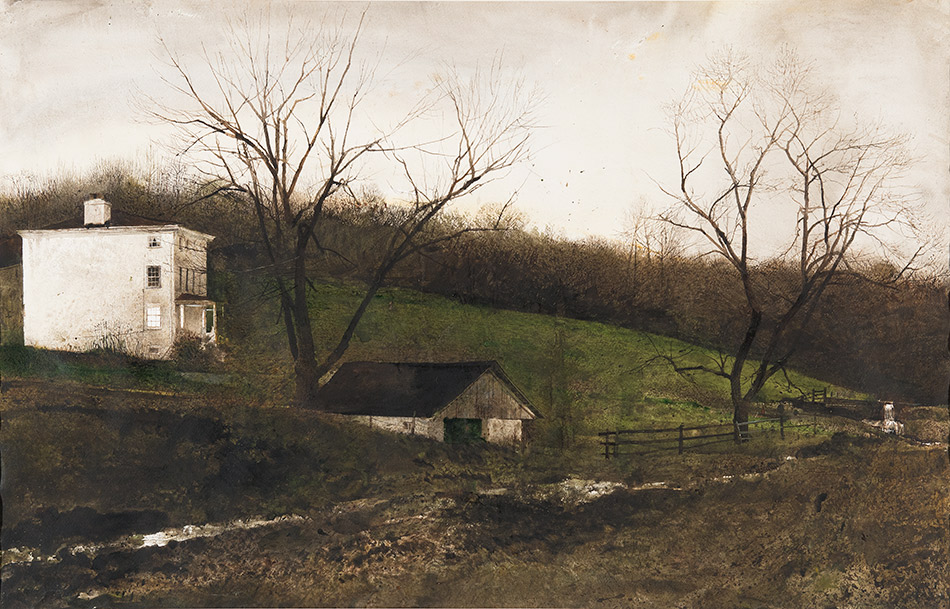 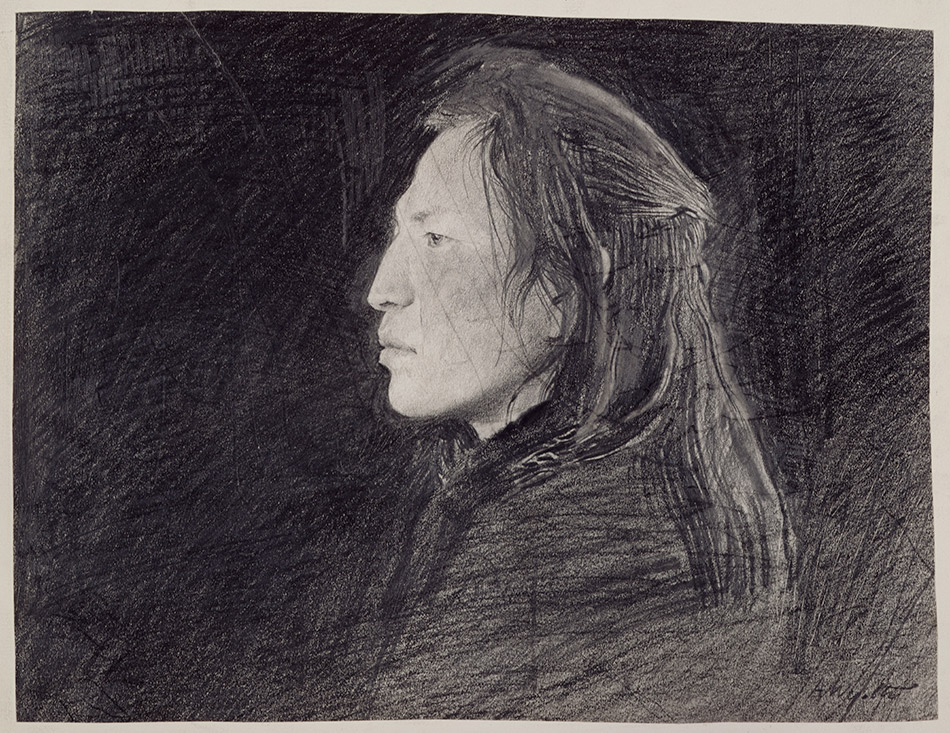 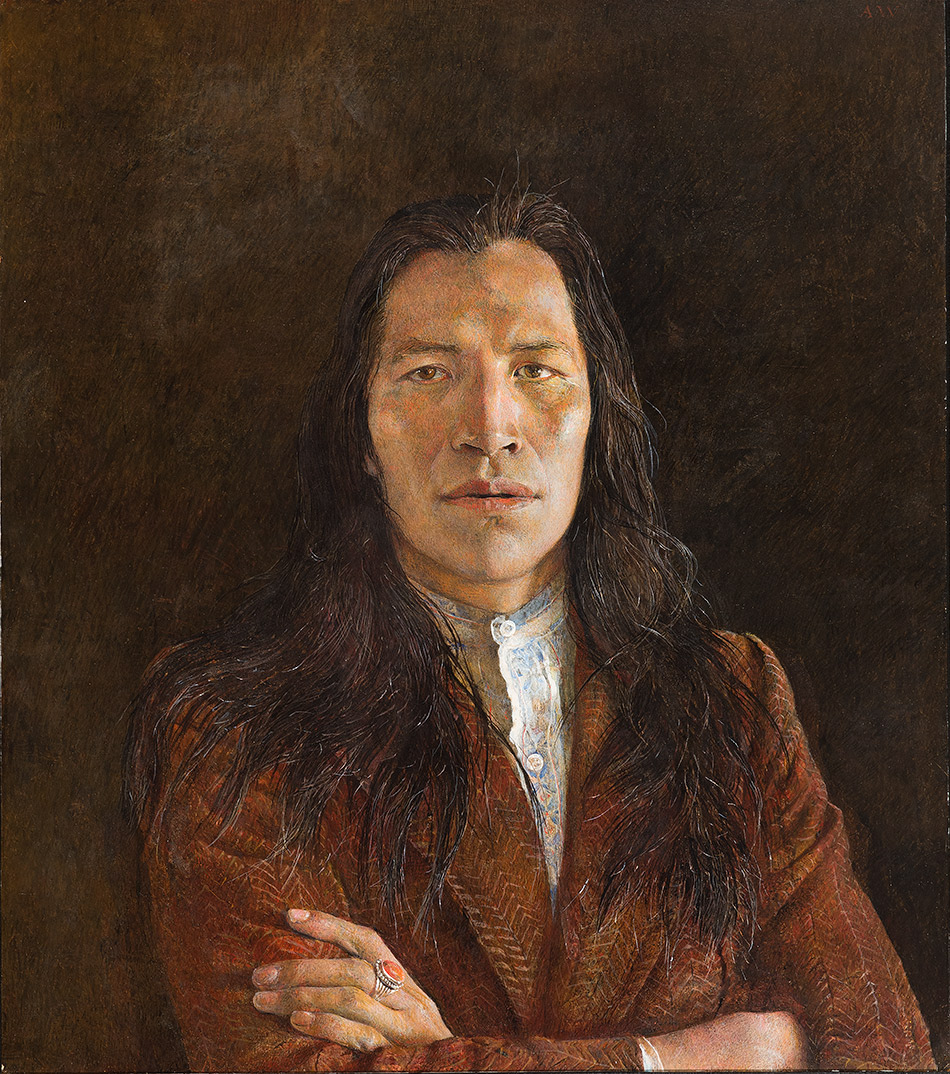 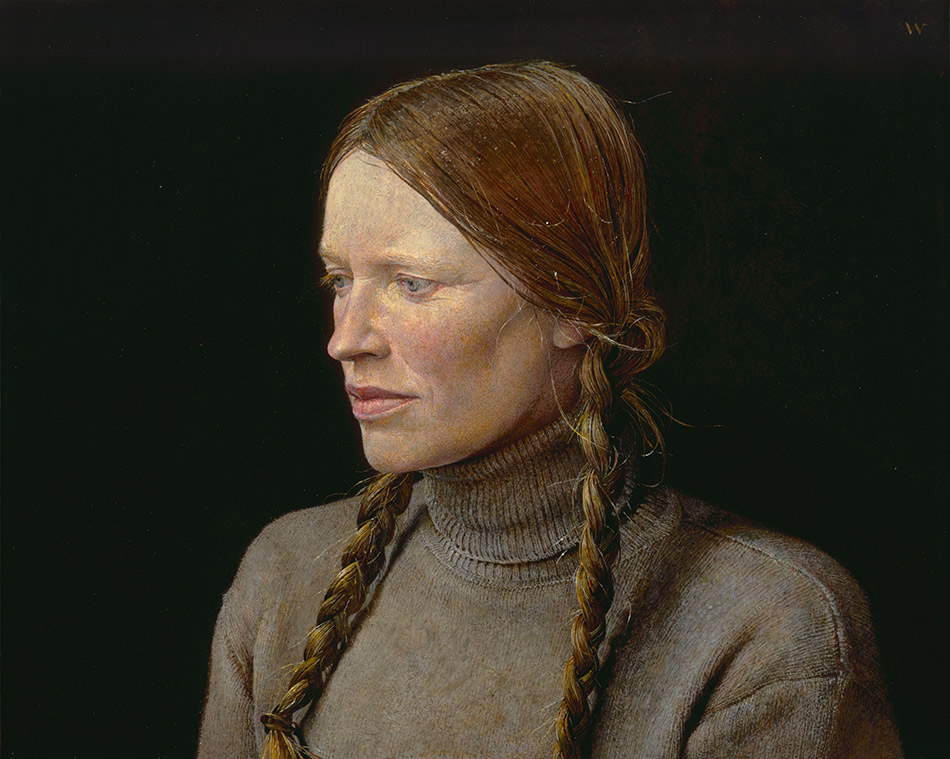 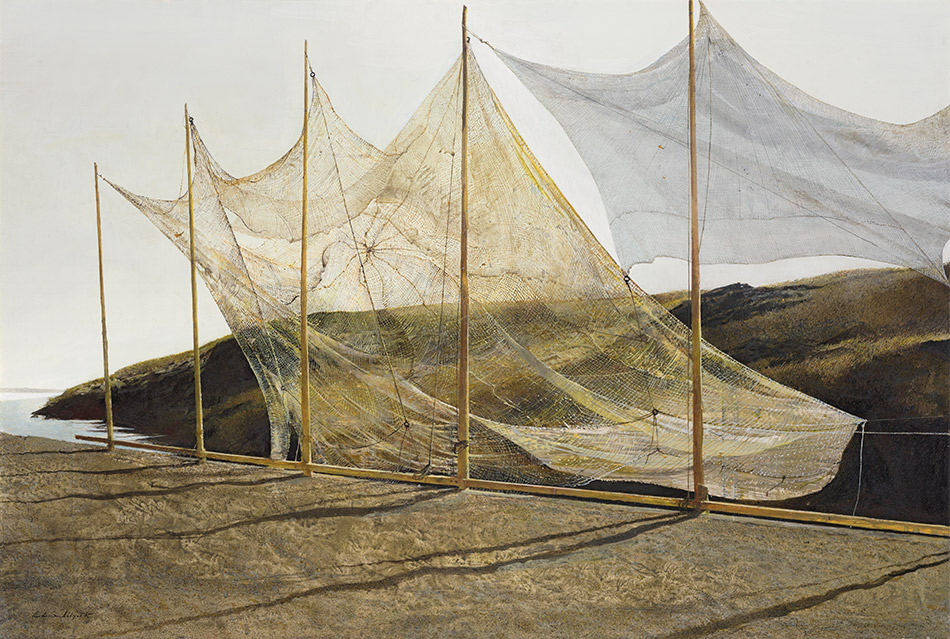 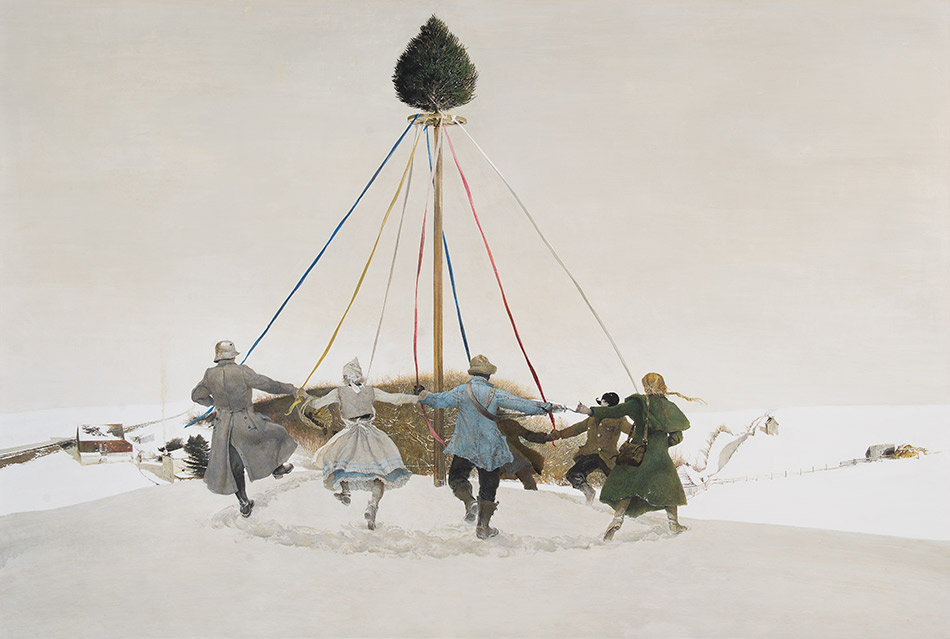 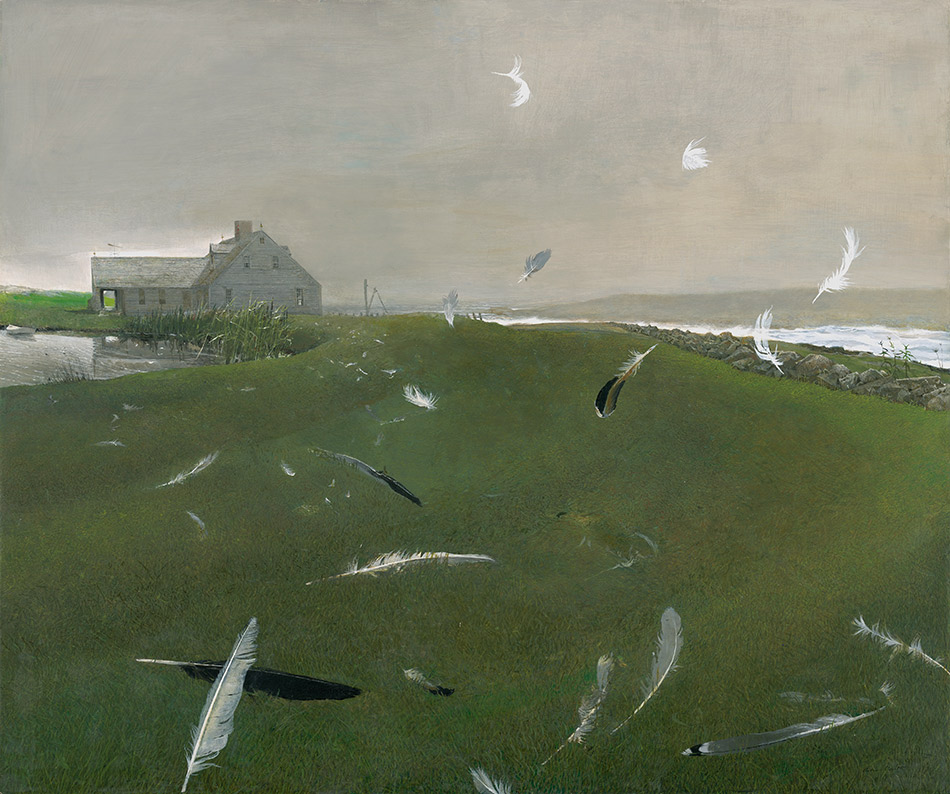 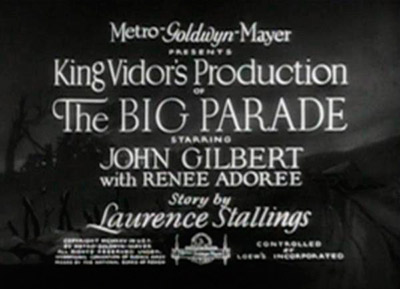 “In Retrospect” explores less-understood influences on Wyeth, such as popular film and images of war. On view are clips from Metaphor (1975), a filmed conversation between director King Vidor and Wyeth, including scenes from Vidor’s silent masterpiece about World War I, The Big Parade (1925), which Wyeth first saw as a child and re-watched hundreds of times. Also playing in the exhibition are clips from Ingmar Bergman’s The Seventh Seal (1957), another film that deeply influenced Wyeth. While his contemporaries were expressing the modern age through abstraction, these clips reveal how Wyeth found his own way to a powerful symbolism through the experimental, modern art form of film.

The exhibition closes with increasingly surreal late works and reflections on mortality, ending with Wyeth’s last painting, Goodbye (2008), seen in this exhibition for the first time since it was briefly shown to those who attended the artist’s memorial service in 2009. 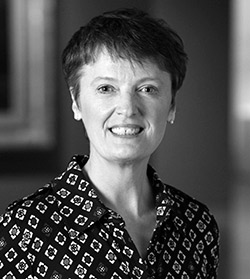 “The work of Andrew Wyeth is technically dazzling, narratively riveting, and, well—weird.”
“His portraits, figures, and landscapes reveal a complex mind investigating the deepest human emotions: love, death, and how we experience the passing of time. We are thrilled to offer this rare opportunity to see such an impressive array of Wyeth’s work.”

Related Programs and Event
Art Beyond Sight and docent tours, as well as programs for educators and school groups, will be offered in conjunction with the exhibition in addition to a series of public programs to be announced. 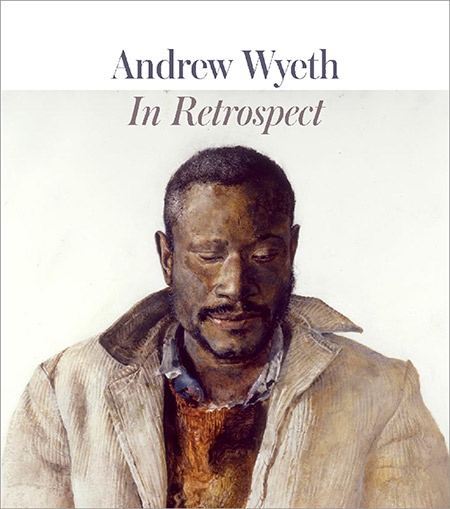 240 page
170 color photografs
Co-published by Yale University Press
ISBN: 978-0-300-22395-8
$55.00
This edition Intended to be the foundation for subsequent Wyeth studies, it features Junker’s insightful analysis of four periods in Wyeth’s career, as well as seven provocative essays on key aspects of Wyeth’s work by scholars from the US and Japan. It features a foreword by Thomas Padon, James H. Duff Director of the Brandywine River Museum of Art, and Kimerly Rorschach, Illsley Ball Nordstrom Director and CEO of the Seattle Art Museum. 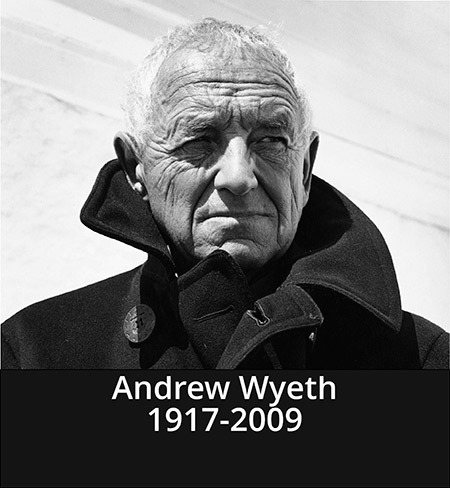 Tribute to a Giant
By Michael Kimmelman,
from Andrew Wyeth obituary on The New York Times,
January 16, 2009.

“Andrew Wyeth, one of the most popular and also most lambasted artists in the history of American art, a reclusive linchpin in a colorful family dynasty of artists whose precise realist views of hardscrabble rural life became icons of national culture and sparked endless debates about the nature of modern art”…read more 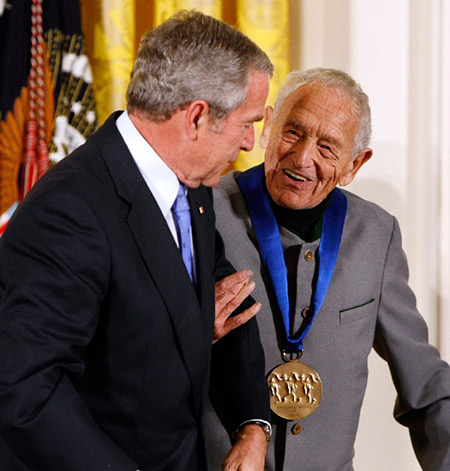 President George W. Bush (L) with painter Andrew Wyeth (R) after Wyeth receives the 2007 National Medal of Arts in the East Room of the White House in Washington, November 15, 2007.

Exhibition Organization and Support
Andrew Wyeth: In Retrospect is co-organized by the Brandywine River Museum of Art and Seattle Art Museum. 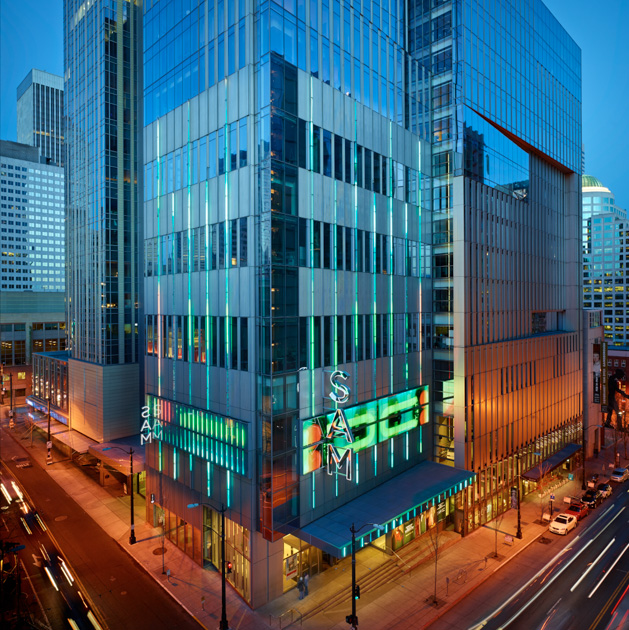 About Seattle Art Museum
As the leading visual art institution in the Pacific Northwest, SAM draws on its global collections, powerful exhibitions, and dynamic programs to provide unique educational resources benefiting the Seattle region, the Pacific Northwest, and beyond. SAM was founded in 1933 with a focus on Asian art.
By the late 1980s the museum had outgrown its original home, and in 1991 a new 155,000-square-foot downtown building opened to the public. The 1933 building was renovated and reopened as the Asian Art Museum in 1994.
SAM’s desire to further serve its community was realized in 2007 with the opening of two stunning new facilities: the nine-acre Olympic Sculpture Park, a “museum without walls,” free and open to all, 118,000-square-foot expansion of its main, downtown location, including 232,000 square feet of additional space built for future expansion. The Olympic Sculpture Park and SAM’s downtown expansion celebrate their tenth anniversary in 2017.
From a strong foundation of Asian art to noteworthy collections of African and Oceanic art, Northwest Coast Native American art, European and American art, and modern and contemporary art, the strength of SAM’s collection of approximately 25,000 objects lies in its diversity of media, cultures and time periods.