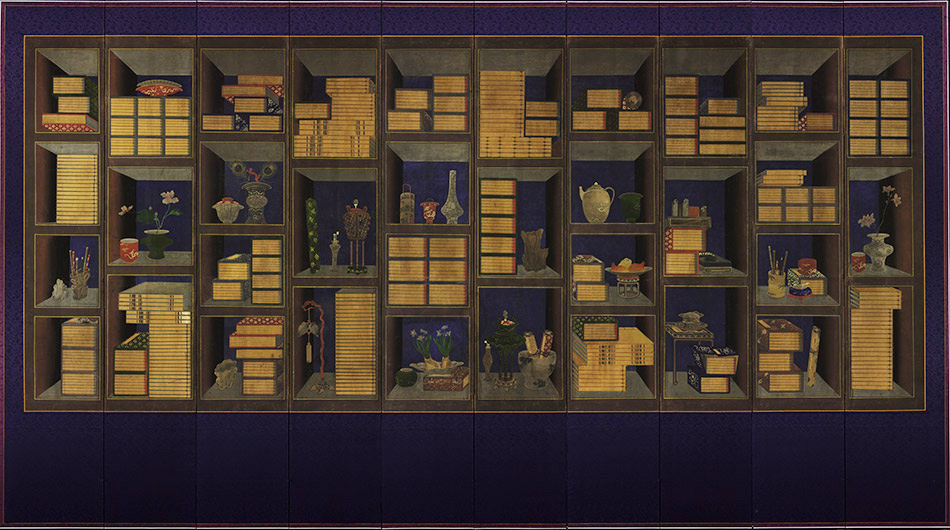 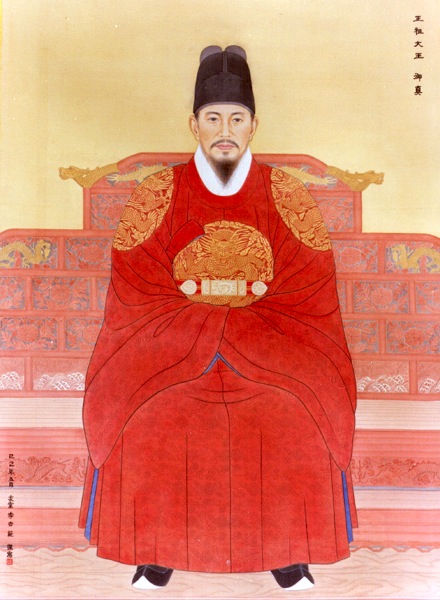 Such screens were praised by King Jeongjo (reigned 1776–1800), and were enthusiastically collected by the educated elite throughout the 19th and early 20th century in Korea. By the late 1800s, chaekgeori screens embellished the studies of scholars and aristocrats as well as the homes of middle-class merchants.

The exhibition features nine large-scale screens ranging from the 19th through the 21st centuries on loan from the Korean Folk Village, Yongin, Korea and the Sungok Memorial Hall, Monkpo, Korea as well as from private collections. The exhibition catalogue reveals new scholarship about the artist who painted the rare, 10-panel folding screen, Books and Scholars’ Accouterments, acquired by the Cleveland Museum of Art in 2011.

The primary motif of chaekgeori is books, the objects Korean intellectuals traditionally associated with knowledge and social distinction. Preferred by the court and elite classes, chaekgado, translated as “picture of bookshelves,” is a subgenre of chaekgeori developed in the second half of the 18th century that represents a Korean collectors’ desire to amass books on diverse topics to express their aesthetic discernment.
This desire for books and other commodities, including writing implements, exotic foreign luxuries, symbolic flowers and gourmet delicacies, set in motion a significant social and cultural shift toward a fascination with material culture that continues in Korea today and finds its expression in the exhibition’s contemporary works. Chaekgeori: Pleasure of Possessions in Korean Painted Screens allows viewers to witness the period when Koreans became active participants in global consumerism through these passionate collecting activities. Image: King Jeongjo

Details of the Six-panels folding screen 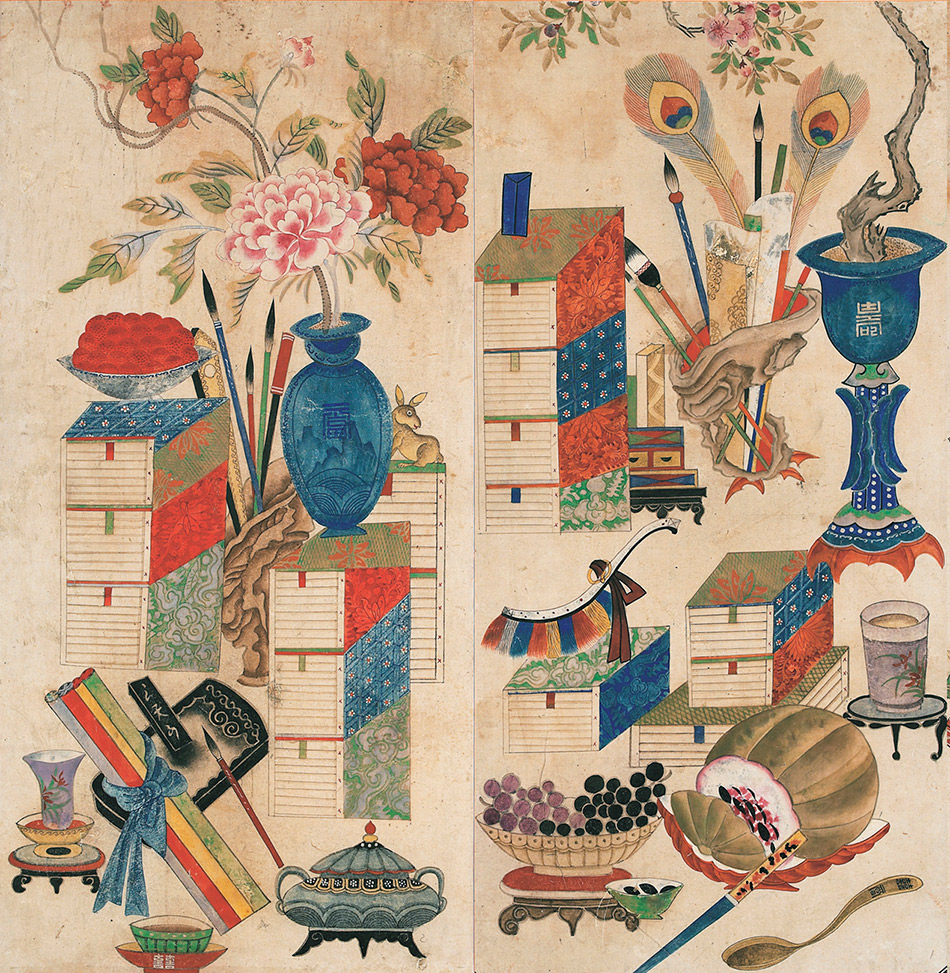 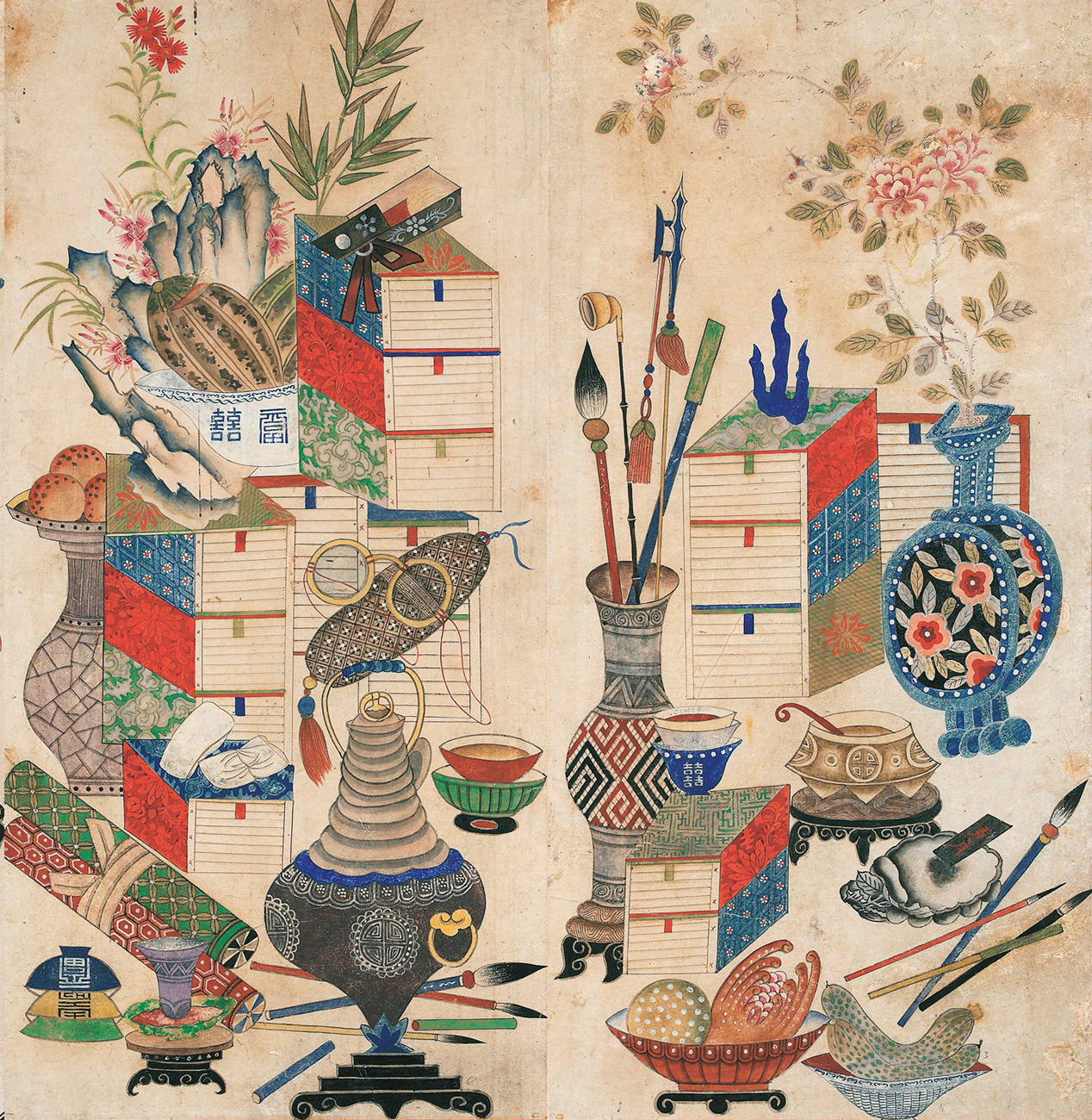 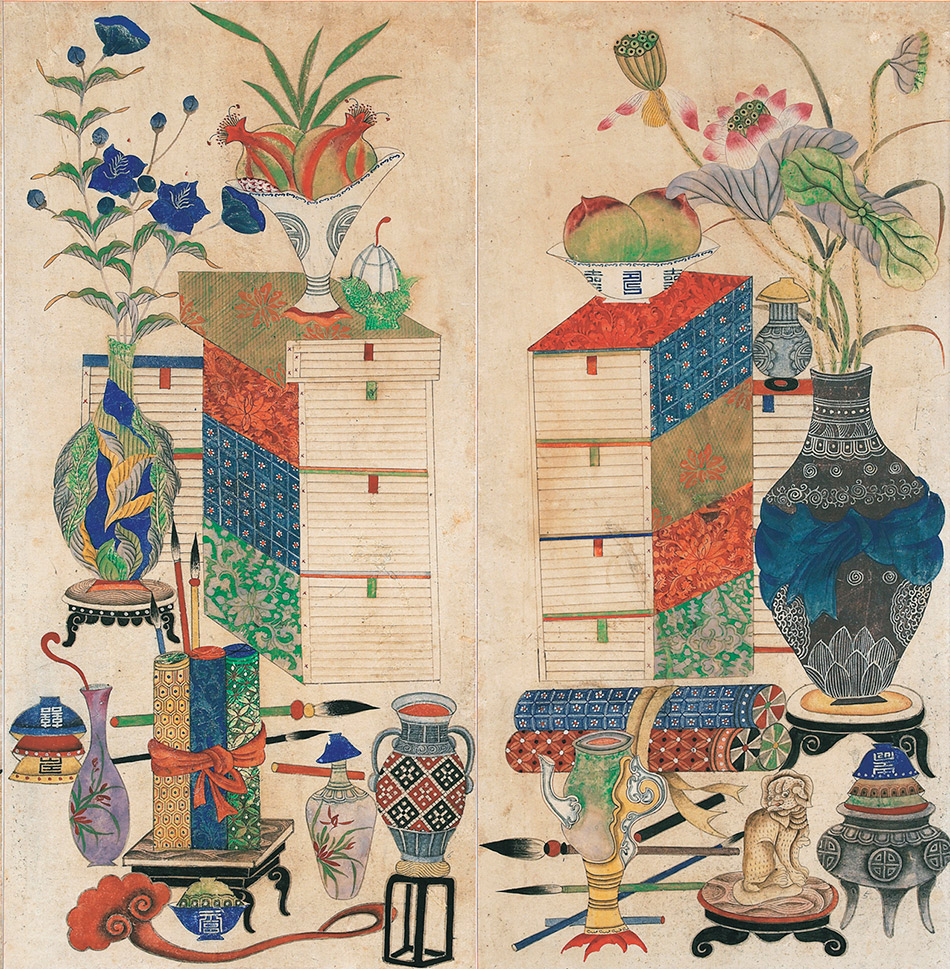 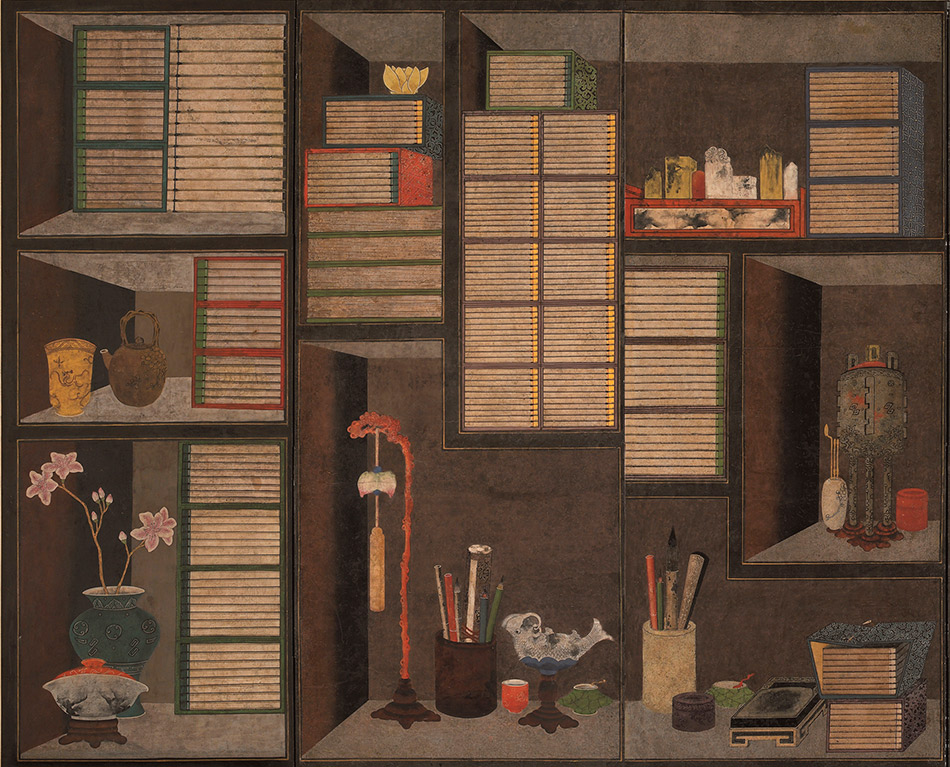 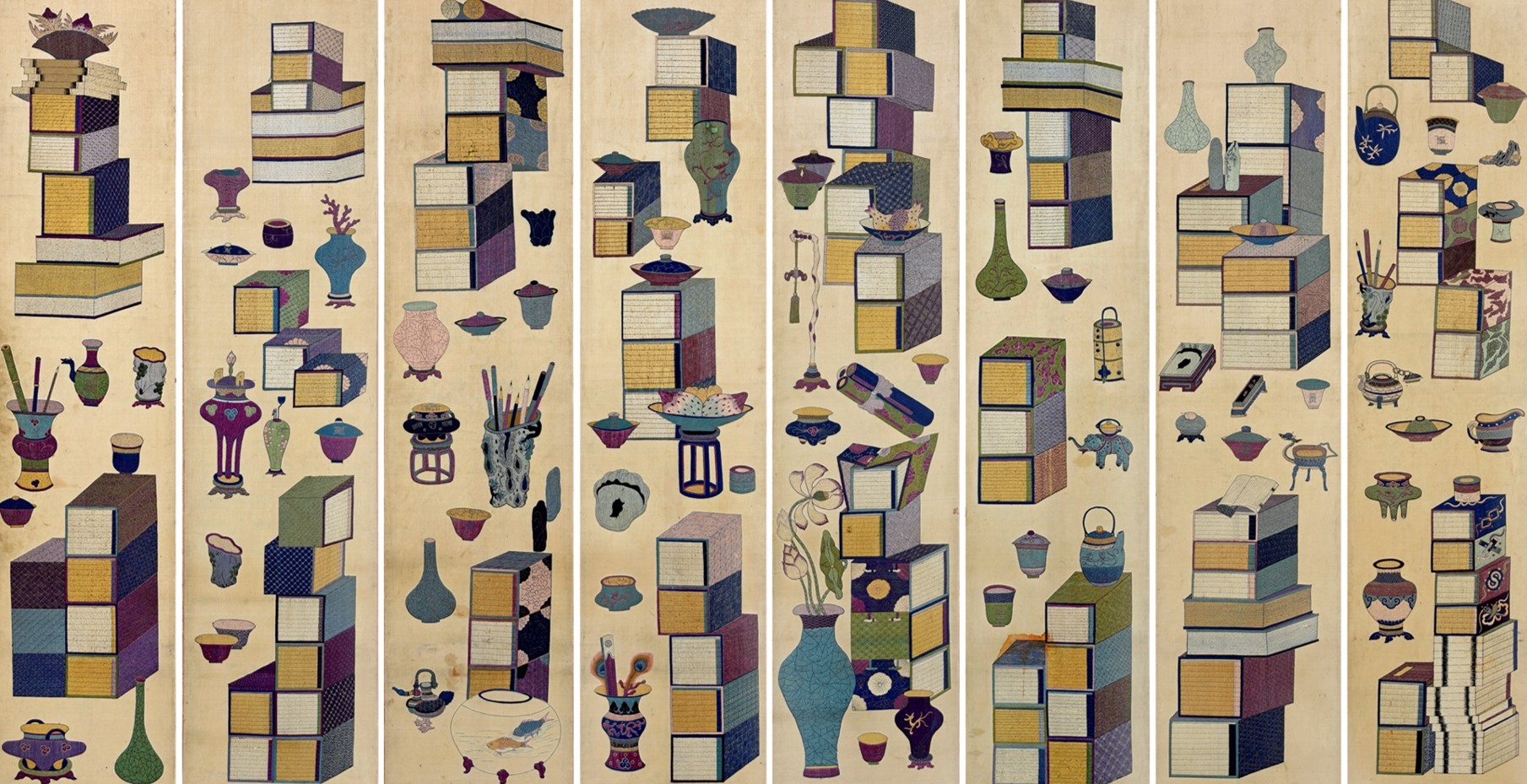 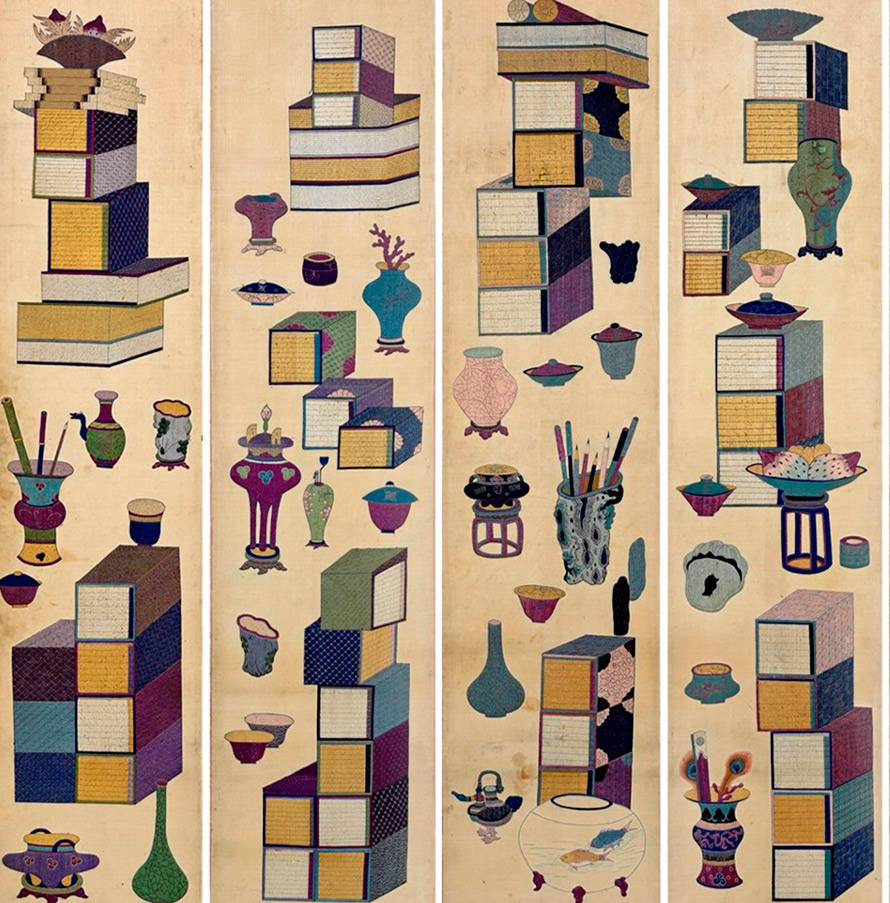 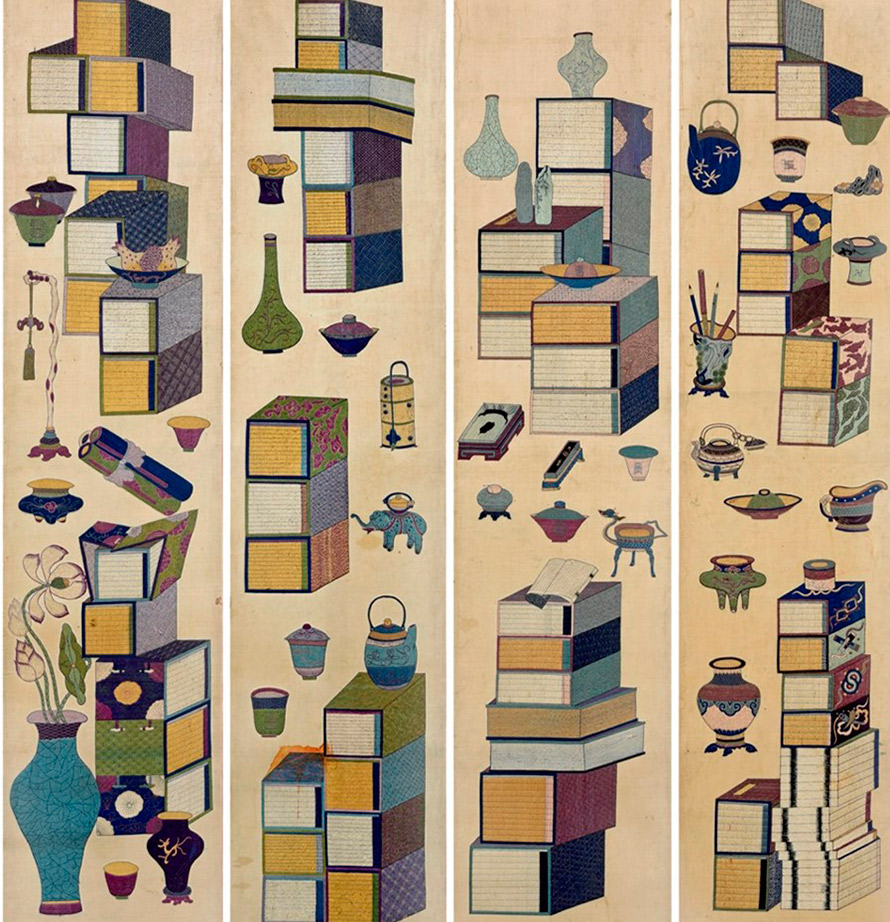 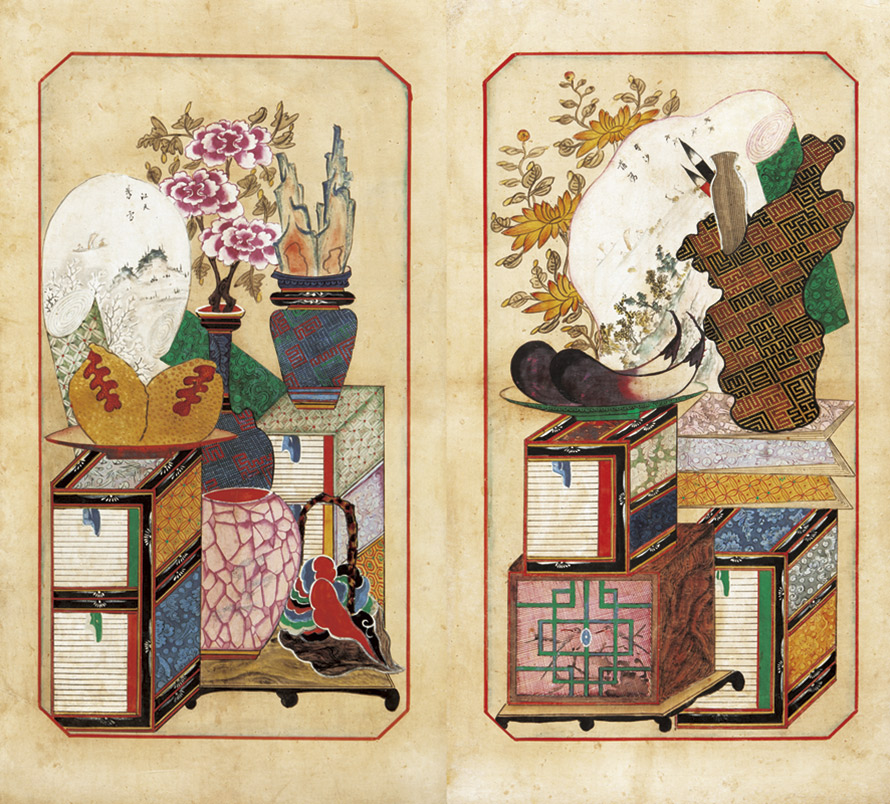 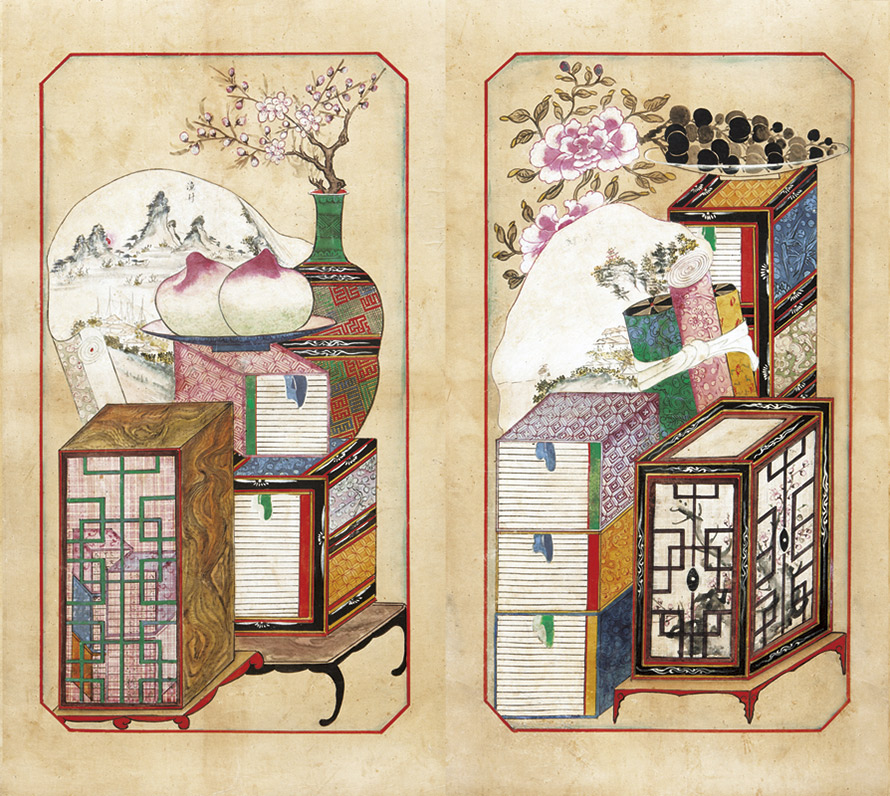 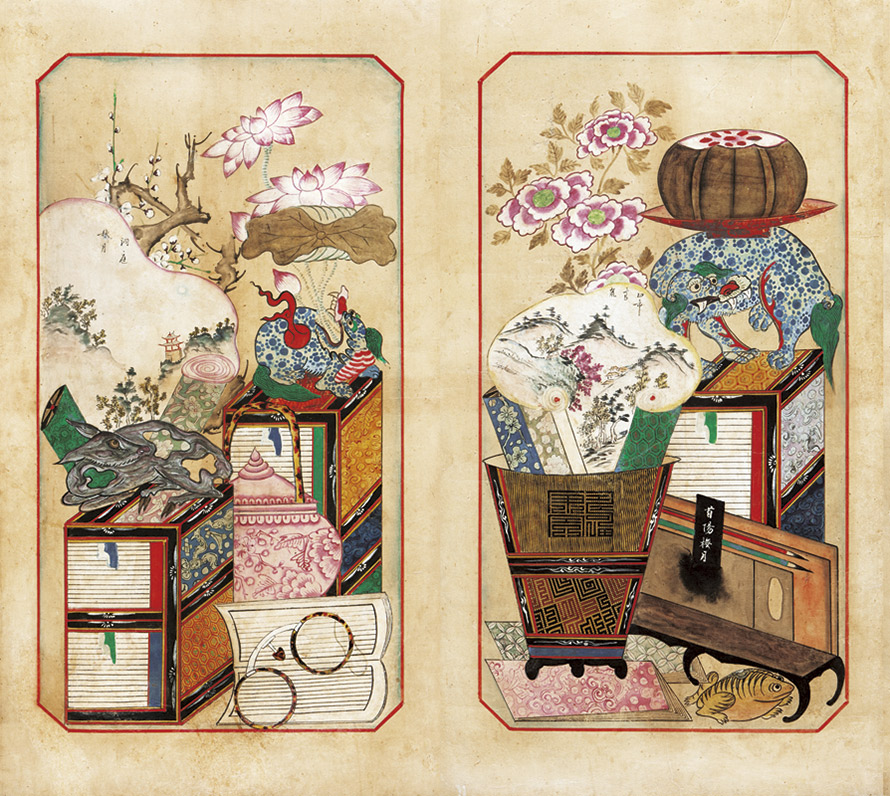 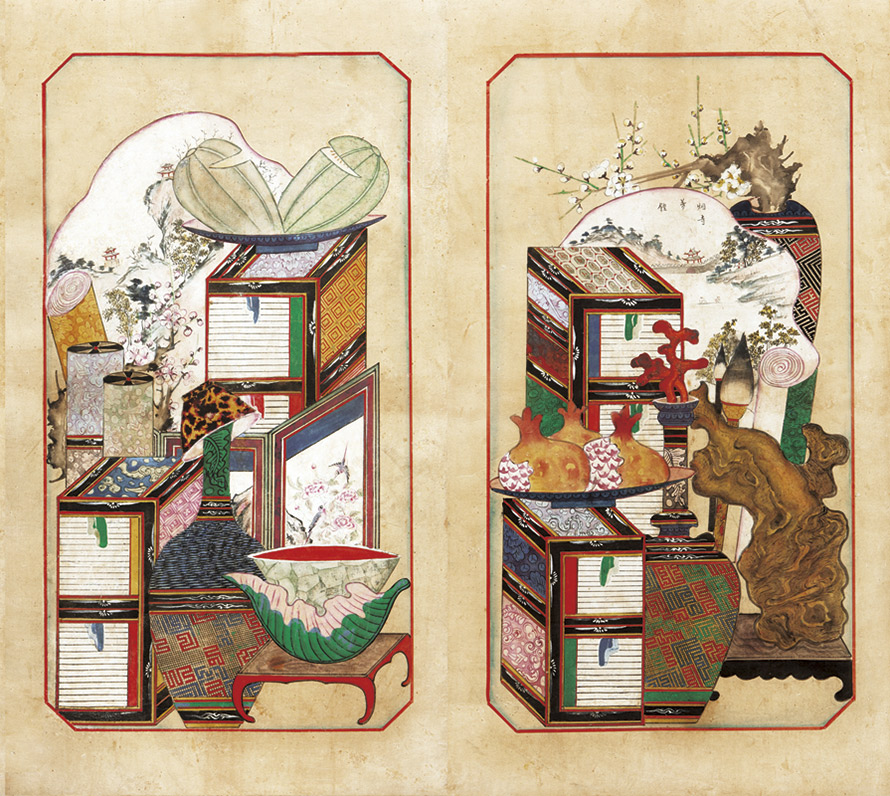 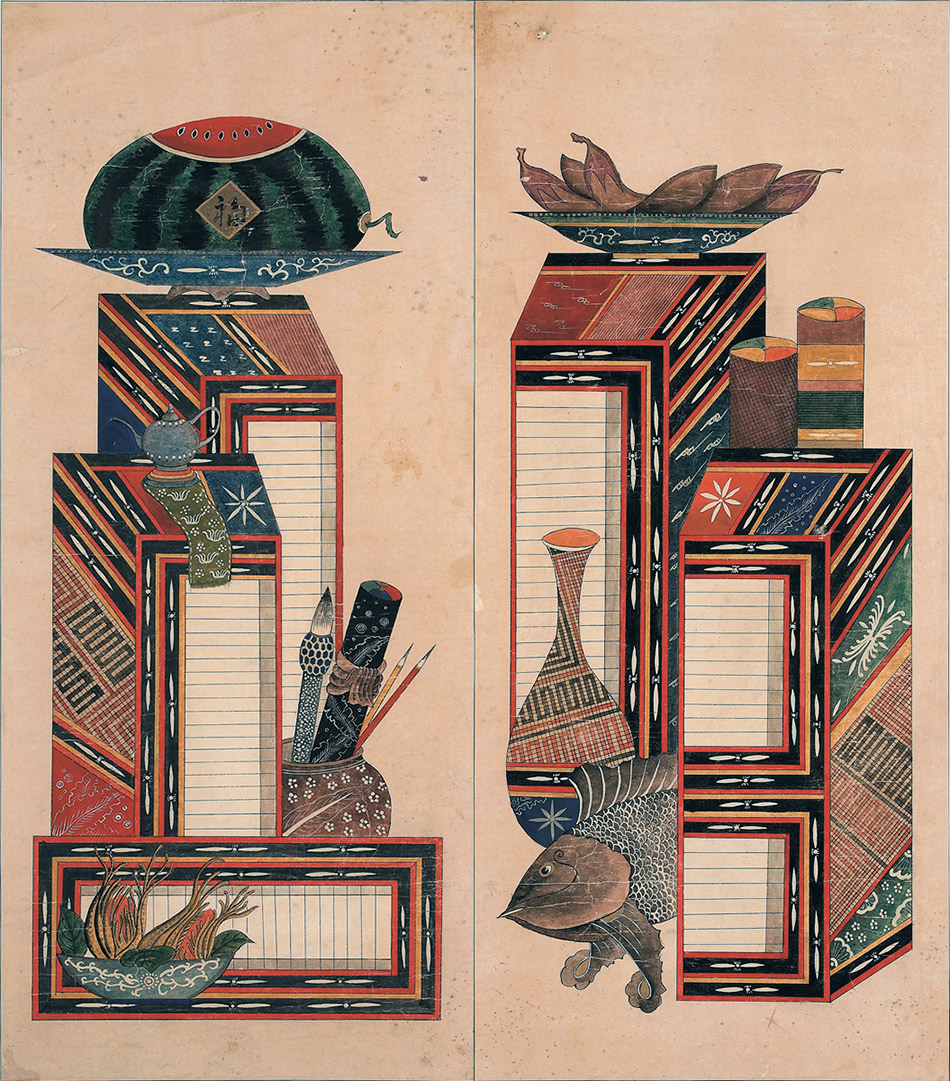 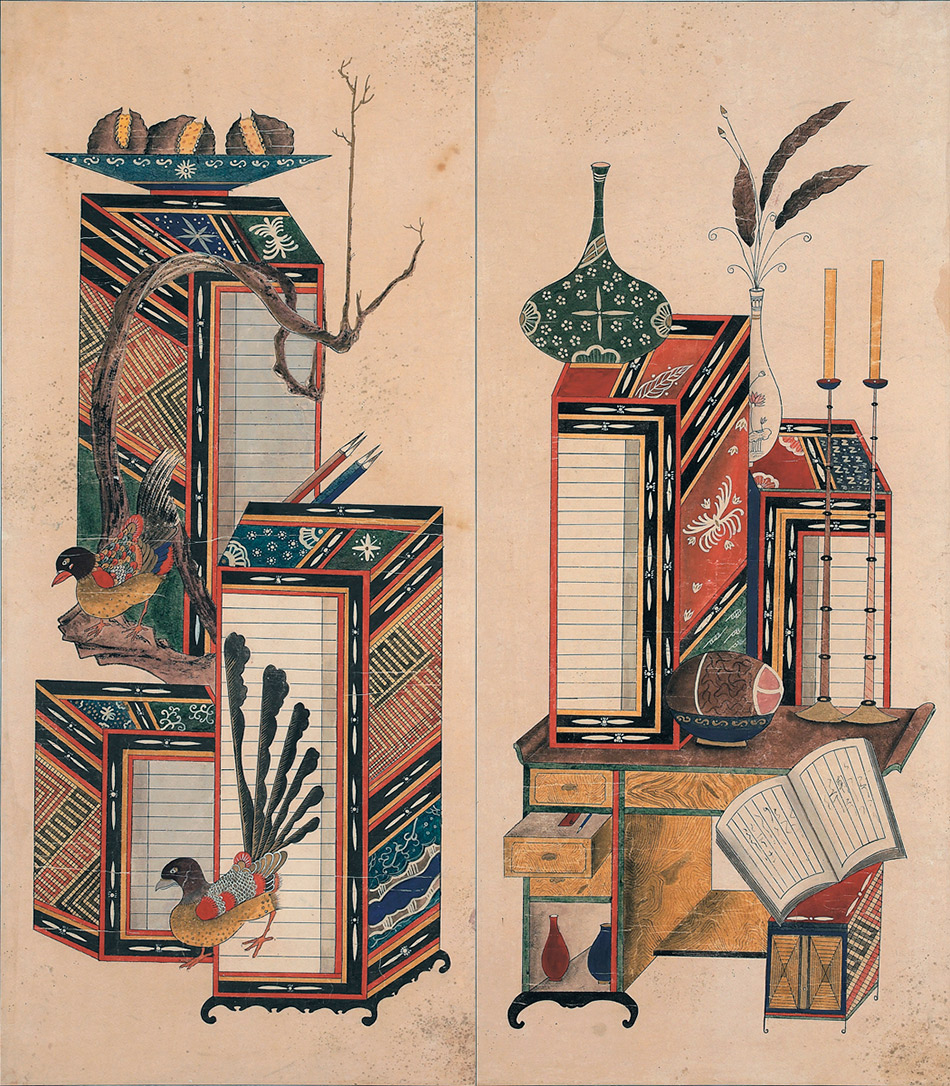 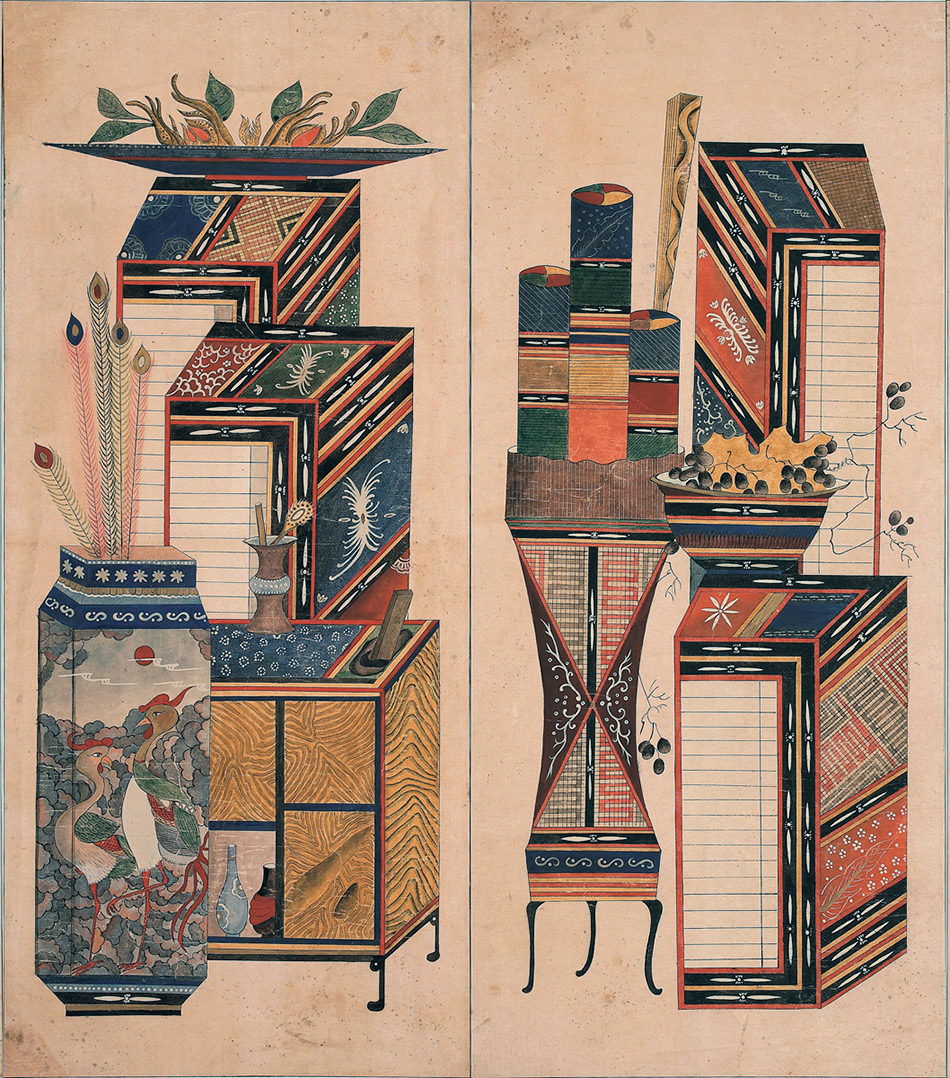 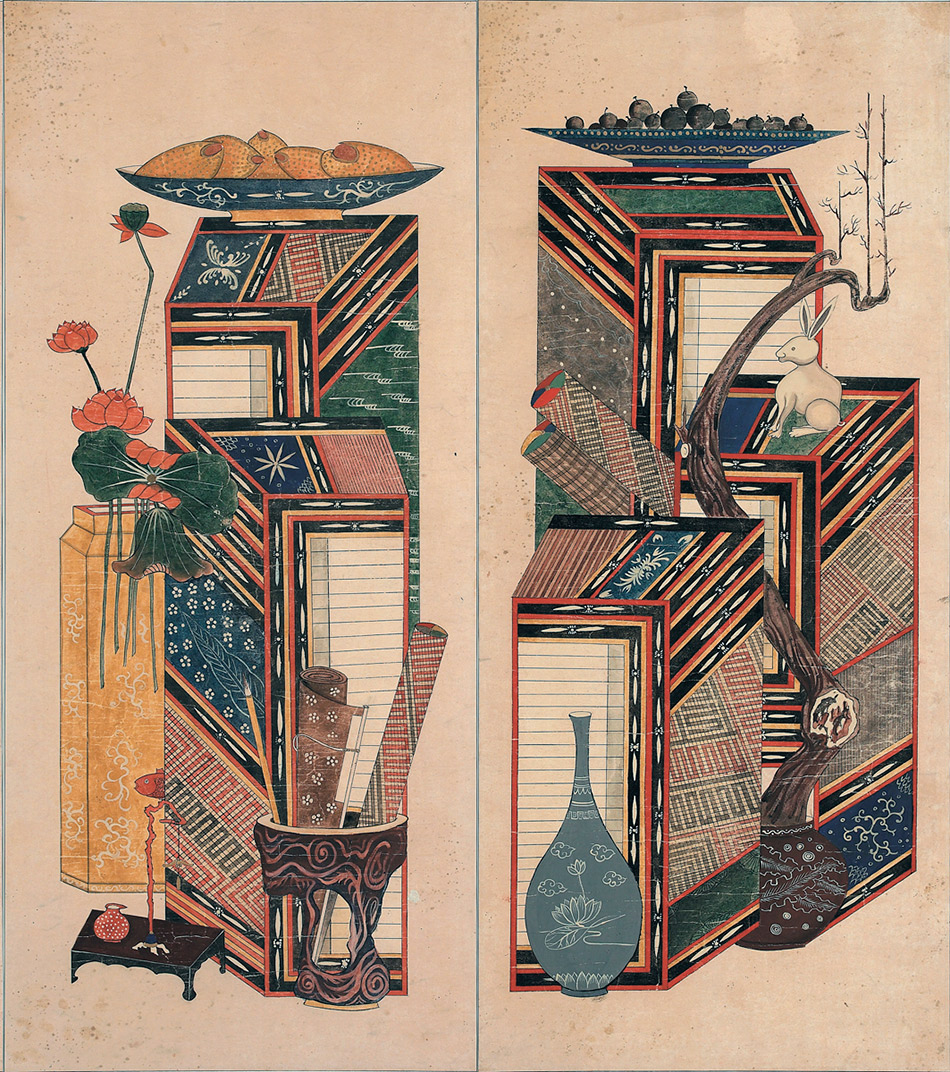 A very important discovery made in the Museum: the artist Seal 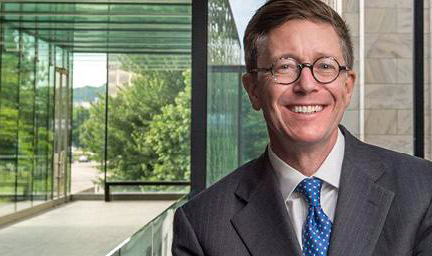 William Griswold,
Director of the Cleveland Museum of Art, said,

“Since many of the screens presented in the exhibition are being shown and studied for the first time, this exhibition has added significant research to the field of East Asian art. We are also thrilled to announce that through collaborative research between Dr. Sooa McCormick of the Cleveland Museum of Art and Prof. Byungmo Chung of Gyeongju University, along with support from the Overseas Korean Cultural Heritage Foundation, the Cleveland museum’s chaekgeori screen is determined to be the work of the famous Korean court painter Yi Taek-gyun from the 19th century. This recent discovery demonstrates how cultural collaborations between institutions and scholars are essential for the advancement of knowledge.”   “Chaekgeori maintained its popularity in Korea for more than two centuries, and we are thrilled to introduce our visitors to this distinctive genre of still-life painting,” 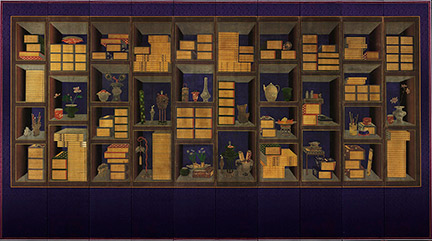 The Seal
Functioning the same as a signature in Western culture, in chaekgeori, a seal impression is often included to reveal the painter’s identity. Due to its discreet manner, a seal impression is called a “hidden” seal. Only about 12 works that bear the painter’s “hidden” seal are known today. This CMA screen has one on the third panel (from the right), which was recently examined by Dr. Sooa McCormick and Prof. Byungmo Chung, along with support from the Overseas Korean Cultural Heritage Foundation. Through the recent discovery of this “hidden” seal, the museum learned the screen is one of only three known existing works by Yi Taek-gyun, a prominent royal court painter active in the second half of the 19th century.
Image: Chaekgado (Books and Scholars’ Accouterments), after 1871. Yi Taek-gyun (Korean, 1808–after 1871). Ten-panel folding screen, ink and color on silk; each panel: 197.5 x 39.5 cm. Cleveland Museum of Art, Leonard C. Hanna Jr. Fund, 2011.37 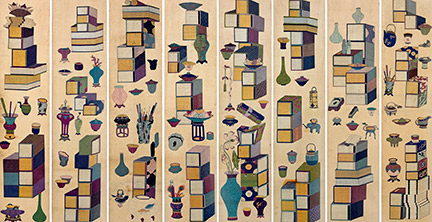 Freed from the confinement of bookshelves, various objects are scattered throughout the picture plane as if floating in the air. While this “floating” type became quite common by the end of the 19th century, chaekgeori done in embroidery remained rare. The particular embroidery work used in this screen was developed in Anju province in North Pyeongan Province, a place known for high-quality silk and skilled male embroiderers. In order to increase palpable texture, Anju embroiderers used thick twisted silk threads and applied an underlay of stitches before the final embroidery work was added.
Chaekgeori (Books and Things), late 1800s. Korea. Eight-panel folding screen, embroidery on silk; each panel: 166 x 38.5 cm. Korean Folk Village Museum, Yongin.

Kyoungtack Hong, born and based in Seoul, South Korea, Kyoungtack Hong is known for his photorealistic depictions of things that surround our contemporary lives. Like chaekgeori, Hong filled the surface of the work with “stuff,” ranging from books to Lego blocks and Barbie dolls that he has collected over the years. Hong’s room crammed with myriad things speaks to the intrinsic human desire to possess things, and at the same time the chaotic arrangement of randomly chosen objects indicates that “materialism” never entirely brings spiritual fulfillment. 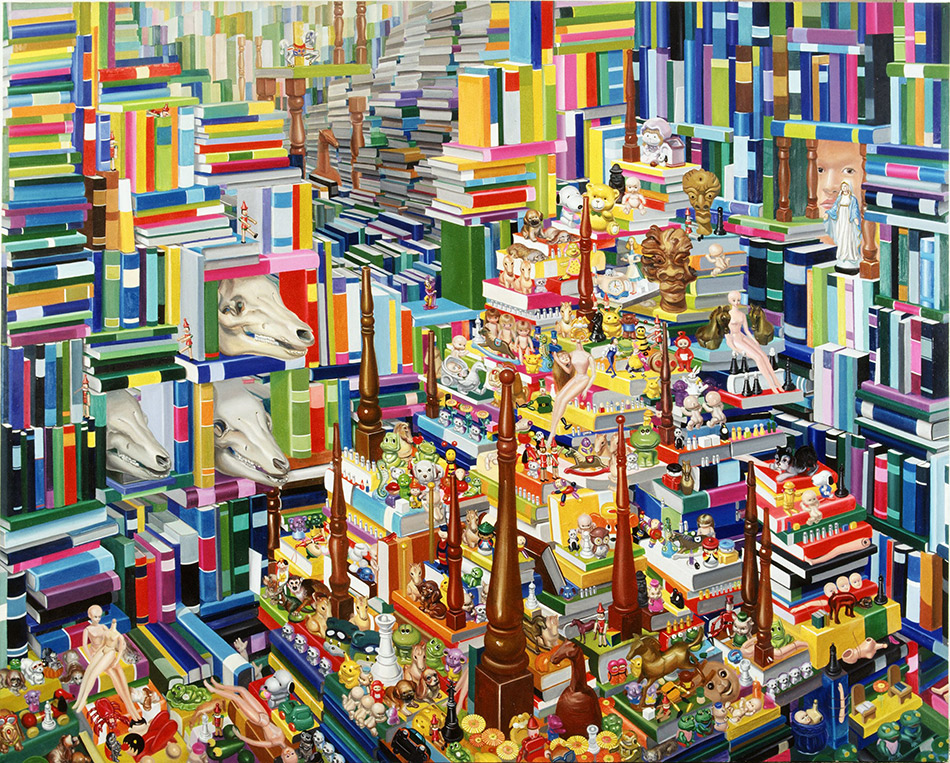 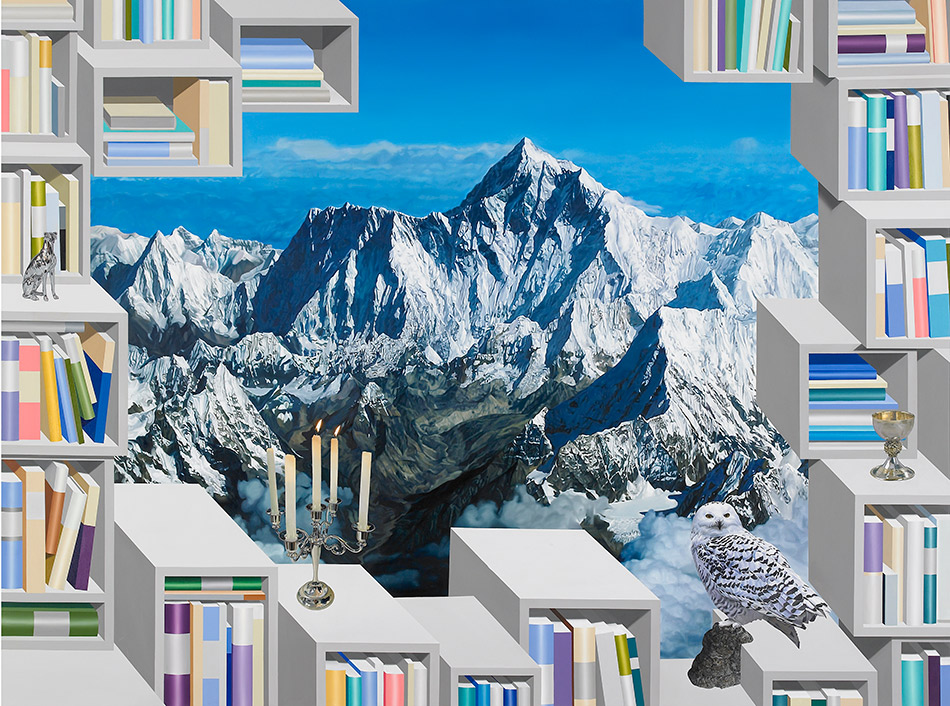 Installation photos of Chaekgeori: images by David Brichford, courtesy of the Cleveland Museum of Art. 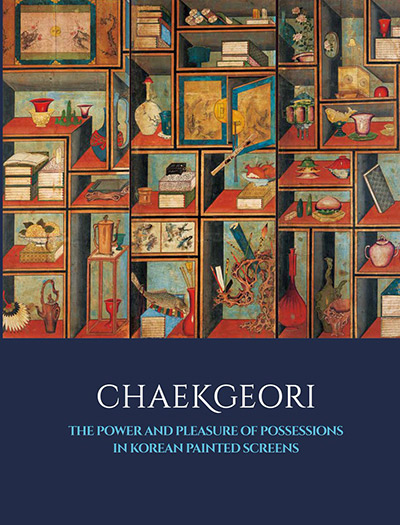 $60.00
at the Cleveland Museum of Art store,
or online by visiting cmastore.org

ORGANIZERS AND SPONSORS
Co-organized by the Korea Foundation and Gallery Hyundai and made possible in part by a gift from Joon-Li Kim and Robert Gudbranson. The Ohio Arts Council helped fund this exhibition with state tax dollars to encourage economic growth, educational excellence, and cultural enrichment for all Ohioans.
Chaekgeori: Pleasure of Possessions in Korean Painted Screens will be on view in the Julia and Larry Pollock Focus Gallery

In a special display only at the Cleveland Museum of Art, the screens will be complemented by a selection of decorative objects from the museum’s renowned collection of Chinese art. This display will emulate Chinese display cabinets of the Qing period (1644–1911) that inspired chaekgeori artists who began working in the Korean royal court of King Jeongjo (r. 1776–1800). Chaekgeori screens became one the most prolific and enduring art forms of the Joseon dynasty (1392–1910). Chaekgeori is also the earliest style of Korean painting to employ the European pictorial techniques of trompe l’oeil and chiaroscuro to create visual illusions of three dimensions on a two-dimensional surface.

PROGRAMMING
All-Day Workshop: Korean Papermaking Sun/Aug 27, 10:00–4:00. Korean papermaking has been in motion for nearly two thousand years. In this all-day workshop, learn how to make hanji, one of the most versatile papers for artists, designers, and inventors. Under the direction of artist Aimee Lee, students will learn how to make paper in the Korean papermaking tradition using fibers they’ll process by hand. Students will leave with handmade paper as well as the knowledge of how to continue making it on their own and an appreciation for the labor it takes to create paper from scratch. $100/$85 CMA members. Reserve through the ticket center at engage.clevelandart.org or by phone at 216-421-7350. Register early; space is limited.Please note that this workshop will be held outdoors on the north lawn. Sun protection is recommended. Attendees should also dress in clothing and shoes that can get wet, as papermaking involves substantial water usage. In case of inclement weather (thunderstorms and/or heavy rain), the workshop will be postponed and rescheduled.

Art and Fiction Book Club Two Wed/Sep 13 & 20, 1:30–2:30. Take a look at the life of a Korean scholar with a tour of Chaekgeori: Pleasure of Possessions in Korean Painted Screens and a discussion of Encounter: A Novel of Nineteenth-Century Korea by Moo-Sook Hahn. $35, CMA members $30.

Papermaking Workshop Sun/Sep 17, 1:00–3:30. The exhibition Chaekgeori: Pleasure of Possessions in Korean Painted Screens is our inspiration for creating handmade sheets of paper and beautiful, textured book covers. (Chaekgeori is translated as “books and things.”) Fee per family member $20, CMA members $18.

Film
Painted in Light: The Korean Movie Screen Film Series
Morley Lecture Hall
Admission to each is $11, CMA members $8.
As a complement to Chaekgeori: Pleasure of Possessions in Korean Painted Screens, the CMA presents four major works—a thriller, a drama, a mystery and an experimental comedy—by four of South Korea’s leading contemporary filmmakers: Park Chan-wook, Lee Chang-dong, Bong Joon Ho, and Hong Sang-soo. Park and Hong have proved so successful in their native country that they have been recruited to make movies in the West. One of Park’s films, Oldboy, was even remade in Hollywood by Spike Lee.
All four films debuted at Cannes; the prolific Hong had two brand-new features in this year’s festival. In short, this series, supported by a grant from the Korea Foundation, is an essential introduction to one of the world’s most vital national cinemas.
Oldboy Fri/Sep 1, 6:45. Sun/Sep 3, 1:30. Directed by Park Chan-wook. A Korean businessman is inexplicably kidnapped and held prisoner in a small hotel room for 15 years. When he finally gets out, he vows revenge on the person responsible for his solitary confinement. Allegedly inspired by the Greek myth of Oedipus, this stylish, outlandish melodrama (which is not for the squeamish) remains one of the most popular and influential Korean films of the 21st century. No one under 18 admitted! (South Korea, 2003, subtitles, color, 35mm scope, 120 min.)

Mother Fri/Sep 15, 6:45. Sat/Sep 16, 1:30. Directed by Bong Joon Ho. This acclaimed film from the director of Okja, Snowpiercer, and The Host follows a devoted mother who sets out to prove that her developmentally disabled son did not commit a killing he is accused of. “A superb murder mystery, with twists coming thick and fast” –Hollywood Reporter. (South Korea, 2009, subtitles, color, 35mm scope, 129 min.)

The Day He Arrives Tue/Sep 26, 1:30. Fri/Sep 29, 7:00. Directed by Hong Sang-soo. “Hong Sang-soo does Groundhog Day” (Time Out New York) in this acclaimed film by a Korean master known for his playful, funny-sad narrative experiments. In this one, a former movie director turned pathetic, provincial film professor spends a three-day weekend in Seoul. But each day’s activities—wandering around the city, drinking with bar mates, trying to reconnect with an old girlfriend—are so similar that he seems caught up in an endless loop of disappointment and failure. “Among (Hong’s) very best . . . a strange mixture of magic, mystery, rueful melodrama and dry comedy that’s like absolutely nothing else” –Salon.com. (South Korea, 2011, subtitles, b&w, 35mm, 79 min.) 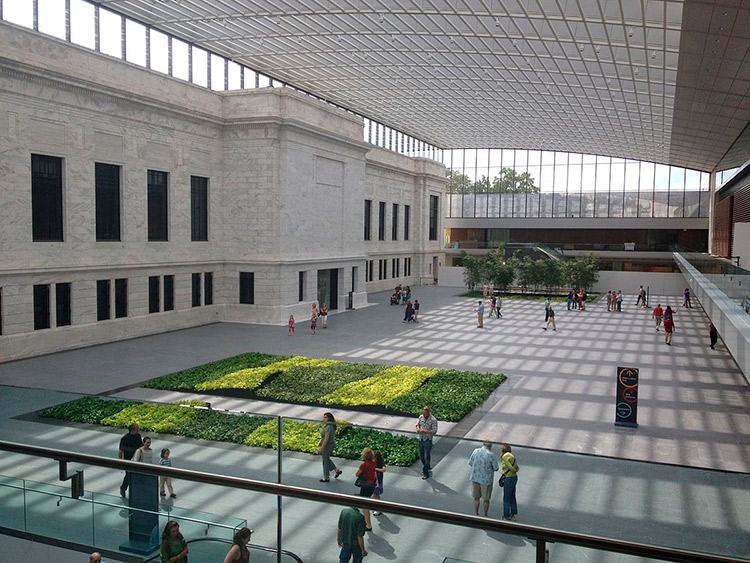 About the Cleveland Museum of Art

The Cleveland Museum of Art is renowned for the quality and breadth of its collection, which includes almost 45,000 objects and spans 6,000 years of achievement in the arts. The museum is a significant international forum for exhibitions, scholarship, performing arts and art education and recently completed an ambitious, multi-phase renovation and expansion project across its campus. One of the top comprehensive art museums in the nation and free of charge to all, the Cleveland Museum of Art is located in the dynamic University Circle neighborhood.
The Cleveland Museum of Art is supported by a broad range of individuals, foundations and businesses in Cleveland and Northeast Ohio. The museum is generously funded by Cuyahoga County residents through Cuyahoga Arts and Culture. Additional support comes from the Ohio Arts Council, which helps fund the museum with state tax dollars to encourage economic growth, educational excellence and cultural enrichment for all Ohioans. For three consecutive years, the museum has been awarded a top four-star rating by Charity Navigator, the nation’s most-utilized independent evaluator of charities and nonprofits.