METROPOLITAN MUSEUM OF ART
Until January 3, 2021 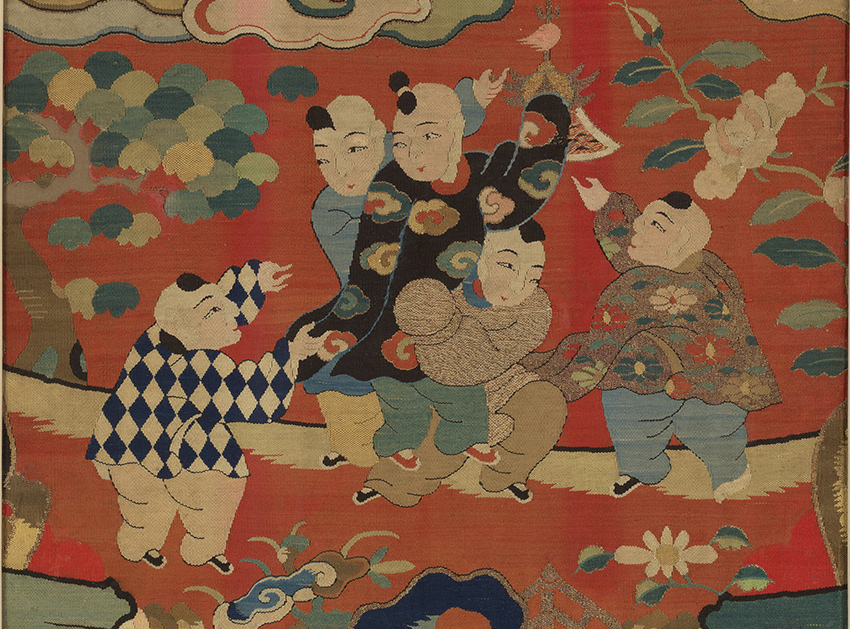 The first gallery of the exhibition focuses on children, a ubiquitous and
long-standing motif expressing the cultural importance of offspring.
The second gallery displays scenes from idealized daily life, historical novels, and legends. In the third gallery religious figures of Buddhism and Daoism are presented.

Conveying a person’s inner spirit (chuanshen) is the central aspect of figural representation in Chinese art. Rather than prioritizing accurate anatomical renderings, artists sought to capture the “life energy” of their subjects.
The exhibition explores sophisticated decorative arts that depict figures dating to late imperial China, from the Song (960–1279) to the Qing (1644–1911) dynasty. Over this thousand-year period, images of humans, legendary figures, and immortals frequently appeared.
Some of the objects in this exhibition are recognized masterpieces, while others are little known and have not been on view for decades. Mainly drawn from The Met collection, this exhibition showcases diverse media, including textiles, lacquer, jade, ceramic, wood, bamboo, and metalwork.

Comments: “On the back of this purse, boys run and tumble, surrounded by flowers, plants, birds, and deer. Woven freely into the silk, this design is an early example of children at play, a form that can be traced to Central Asia in the eighth century. The silk’s pattern is clearly scaled to fit small objects such as this purse”.

Comments: “This textile was meticulously woven with boys tucked among floral scrolls and lotus pods—a rebus for, or visual allusion to, progeny. In addition to the Buddhist belief in rebirth from the lotus, multiseeded lotus pods were also thought to be a symbol for plentiful offspring”.

Comments: “Remarkable for its large size and fresh colors, this textile was woven with the typical Chinese motif of boys and lotuses. However, details on certain costumes reveal a Mongolian influence. The jackets of the boys seen at top and bottom are fastened on the figures’ left, a style not used in Chinese clothing. The design of the large flower blossom and the color palette also help to date it to the Yuan period, when China was under Mongol rule”.

Comments: “Twenty-two boys play games, ride hobbyhorses (a toy that may have been invented in China), and enjoy a large masonry slide in the corner of an imperial garden. Children at play was a popular subject among artists of the earlier Song Imperial Painting Academy. Judging from the costumes and representational techniques, this painting was most likely executed in the first years of the Ming dynasty, when the imperial court revived the styles and subjects of the academy”.

Tray with women and boys on a garden terrace, 14th century
元 剔紅仕女嬰戲圖漆盤

DETAIL of Tray with women and boys on a garden terrace

Comments: “Scenes of harmonious families featuring women and frolicking children began to appear in Chinese decorative art in the fourteenth century. This tray depicts two women and twenty-three boys on a terrace and pavilion overlooking a lotus pond. One woman, clearly the hostess, rests on an openwork seat; the other, probably a nanny, holds one child while another clutches her skirt. Several other youth take part in a procession that resembles that of court officials—a common sight in major Chinese cities in the fourteenth century”. 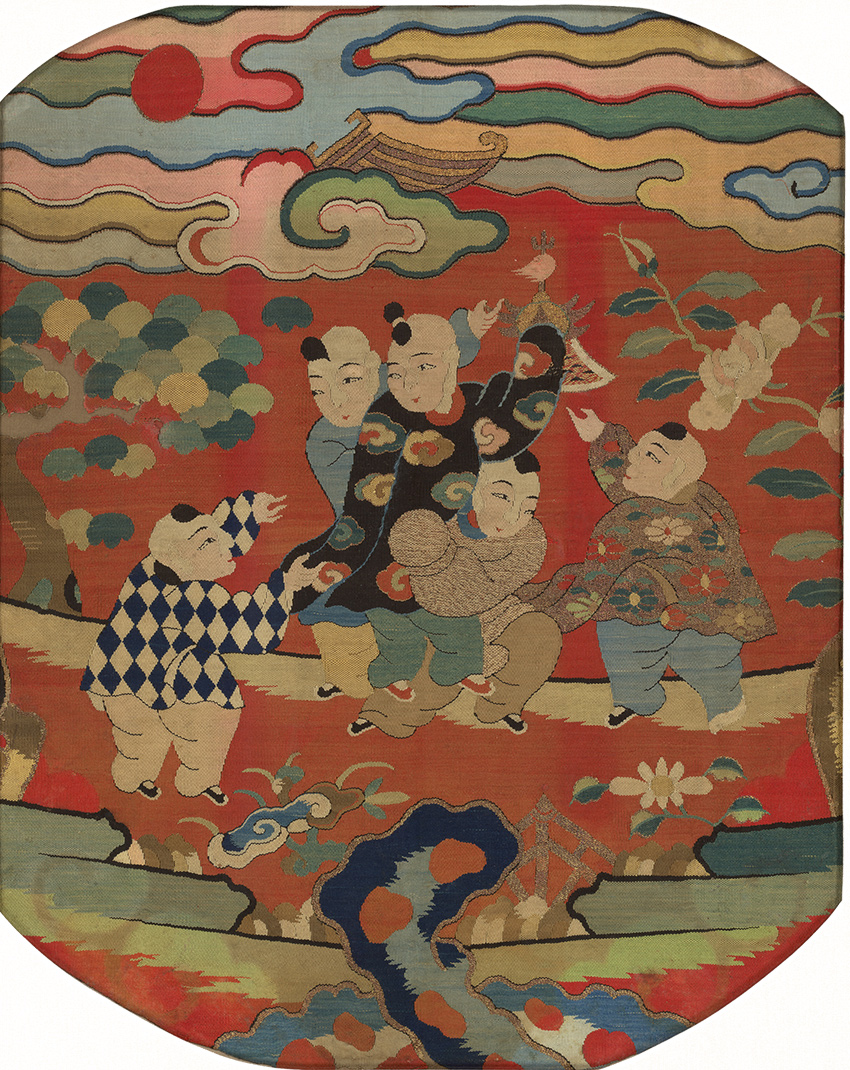 Comments: “This textile is probably a portion of a much larger piece, perhaps a hanging, that would have illustrated many groups of small boys at play in a garden. Items bearing this popular theme were particularly favored as wedding gifts, for the boys symbolize increase, abundance, and future happiness”.

DETAIL of Panel with boys at play, 17th century

Comments: “This large polychrome silk tapestry features a motif called “the hundred boys,” an expanded version of children at play, to express the desire for a prosperous family. Little boys (eighty-three, to be exact) engage in various activities, such as archery, boating, falconry, fishing, horseback riding, kite flying, music making, playing with a ball, and reading. Each child is woven in a different posture with simple but fluid outlines, which required not only great skill but also an artistic sensibility. Panels like this usually served as wall decoration in elite houses”.

Bowl with children in a garden, mid-16th century
清 緙絲百子圖

Comments: “The theme of boys playing was popular in Chinese decorative arts, as demonstrated by this blue-and-white porcelain bowl. Unlike carving and weaving, brush painting on porcelain gives artists more freedom to represent a variety of children’s facial expressions: delighted, charming, and sometimes mischievous”. 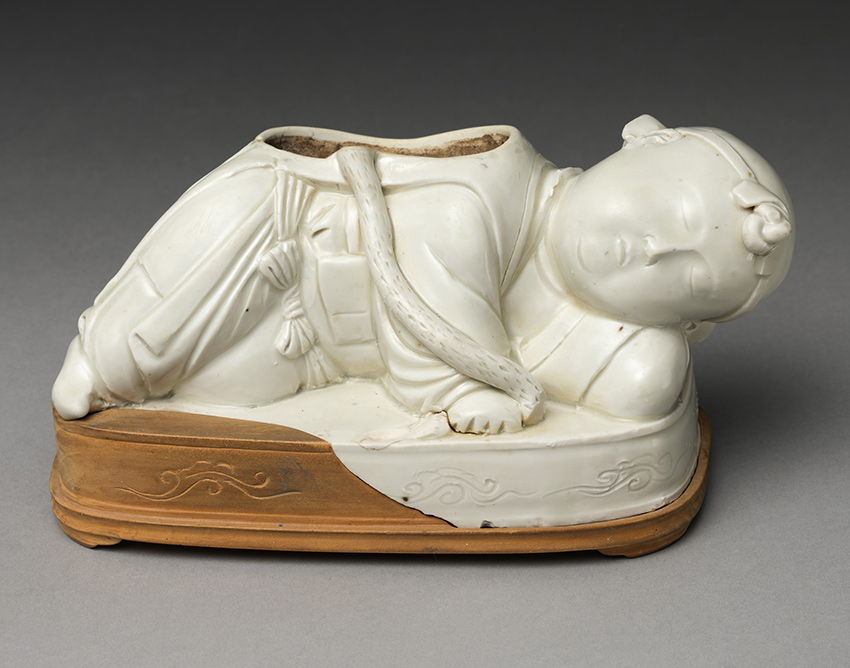 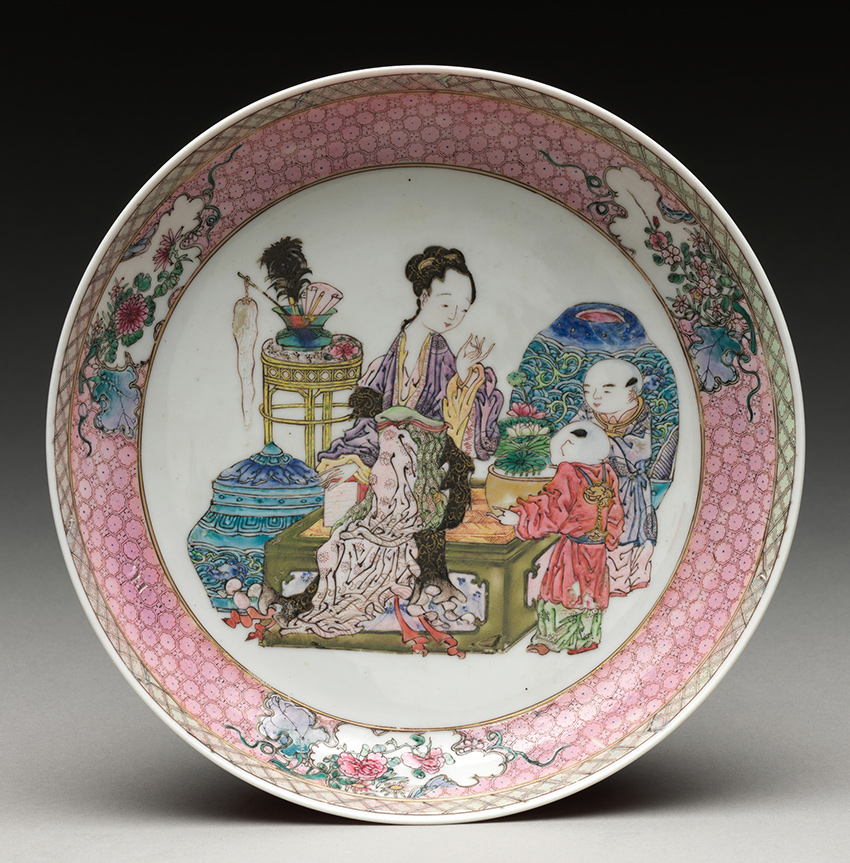 Comments: “Scenes of children and families, like the one on this porcelain dish, became increasingly popular during the Qing dynasty. The central scene represents an intimate moment in which a man seated in the hall of a two-story house watches his wife and two boys play in a walled garden”. 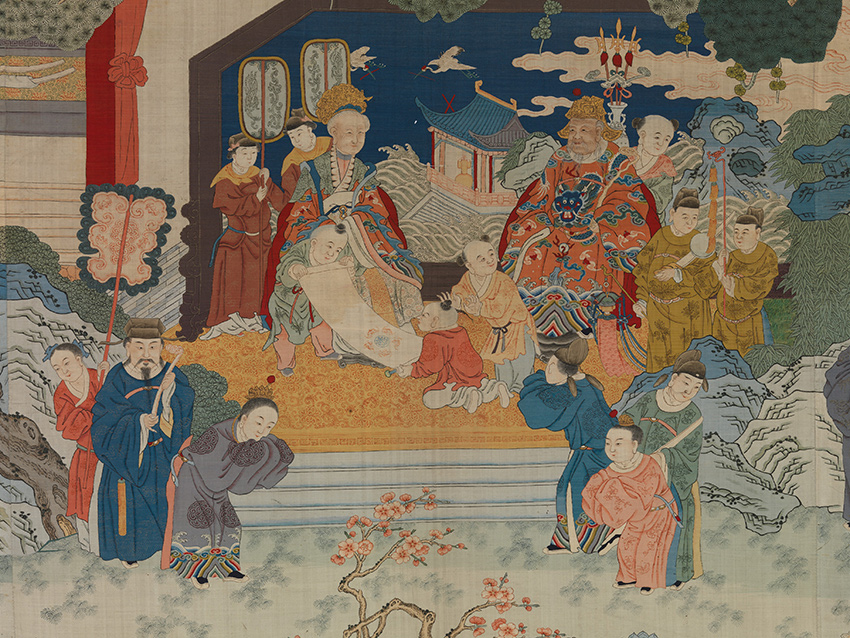 Comments: “This tapestry is part of a set of large ornamental panels. Among the guests honoring the elderly couple are several lively children, probably their grandsons. The man and his wife wear matching robes, appropriate dress for court officials and their wives. As a birthday gift, the three boys at their feet present a hanging scroll bearing the character for longevity (shou) in blue, surrounded by five red bats (fu). Bats were typically used to represent good fortune, as the words are homophones in Chinese”. 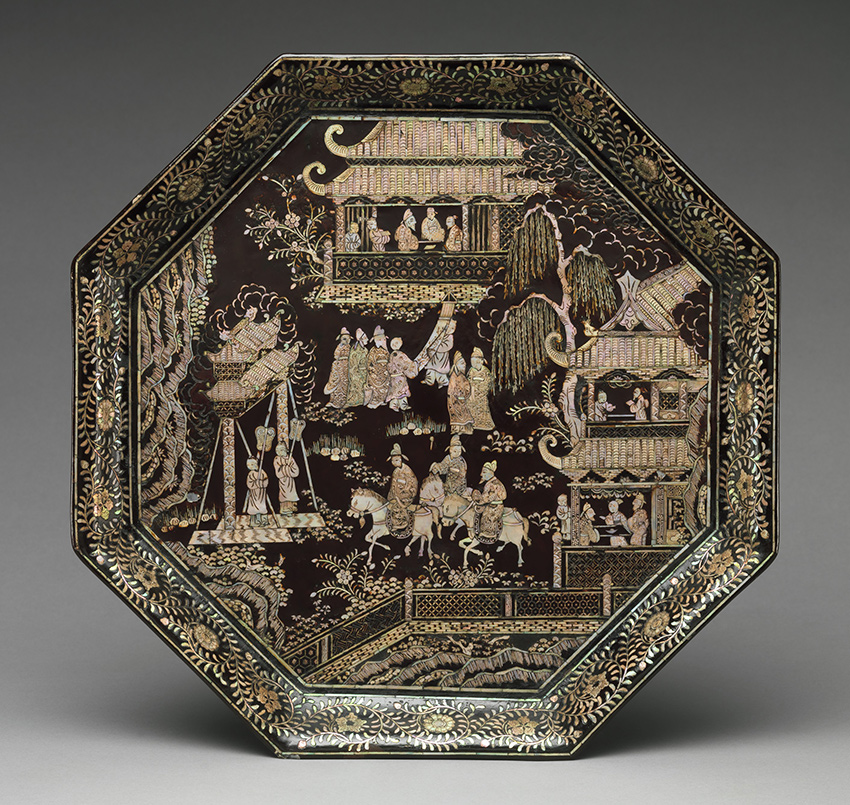 Comments: “This dish depicts Chinese literati, or scholar-officials, engaging in leisure activities. In the foreground, three such men, identifiable by their clothing, travel on horseback toward a gate attended by two figures holding large fans. The trio in the middle ground examines a painting displayed by a pair of young attendants. The other scholars are either strolling in the garden, reading books, enjoying tea, or engaged in conversation”. 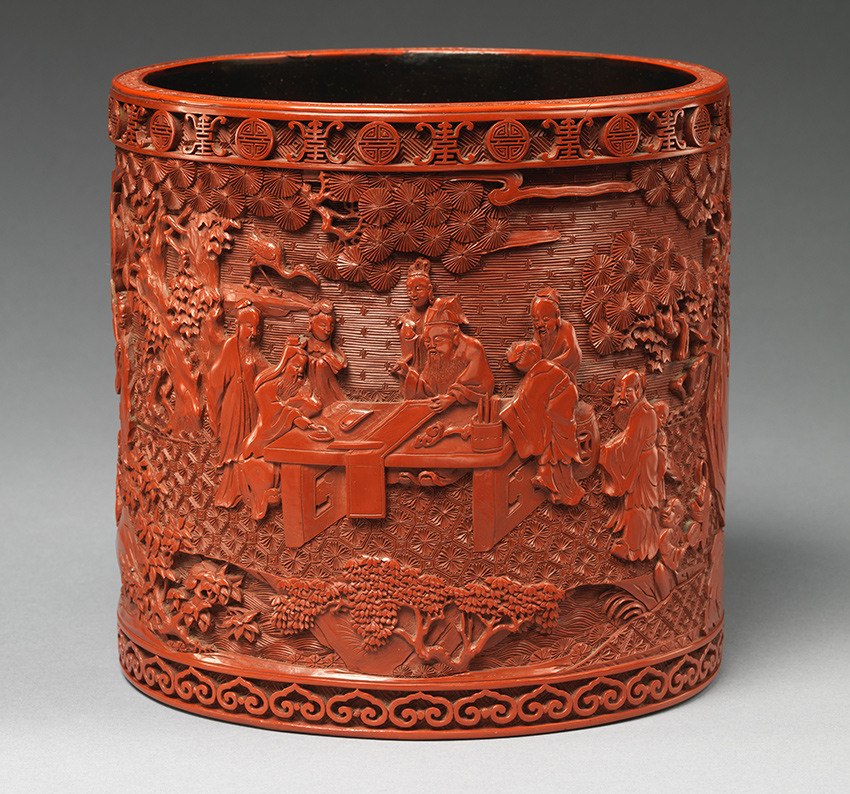 Comments: “This brush pot shows scholars writing, painting, and enjoying nature—activities found in imagery of scholar-officials throughout Chinese art. The scene also recalls famous historical gatherings of learned men such as those in the West Garden, an eleventh-century imperial family residence”.

Comments: “The God of Longevity (Shoulao), shown here accompanied by children, is one of the three most popular deities in Chinese folklore. The other two are gods of good fortune and achievement and distinction. Abundant in nature and desirable for carving, bamboo is frequently used both as a material and a subject matter in Chinese art from this period. Its resilience is often compared to the virtue of those who maintain their principles in the face of adversity, and its hollow stalk is often associated with humility and an unprejudiced mind”. 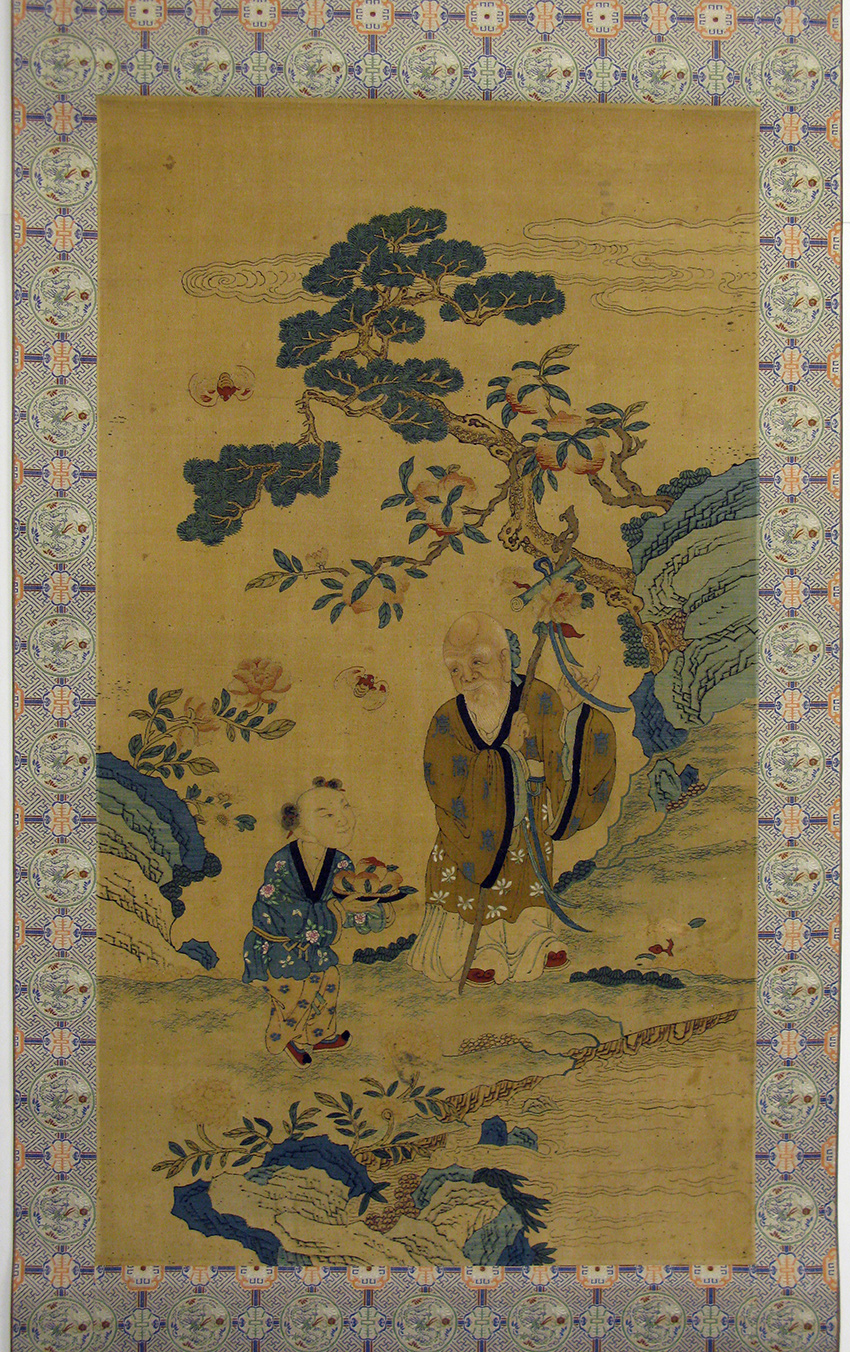 Comments: “The boy in this tapestry hanging scroll is an immortal servant. The bald old man with a prominent forehead is the God of Longevity (Shoulao), and the plate of peaches in the boy’s hands a symbol of immortality”. 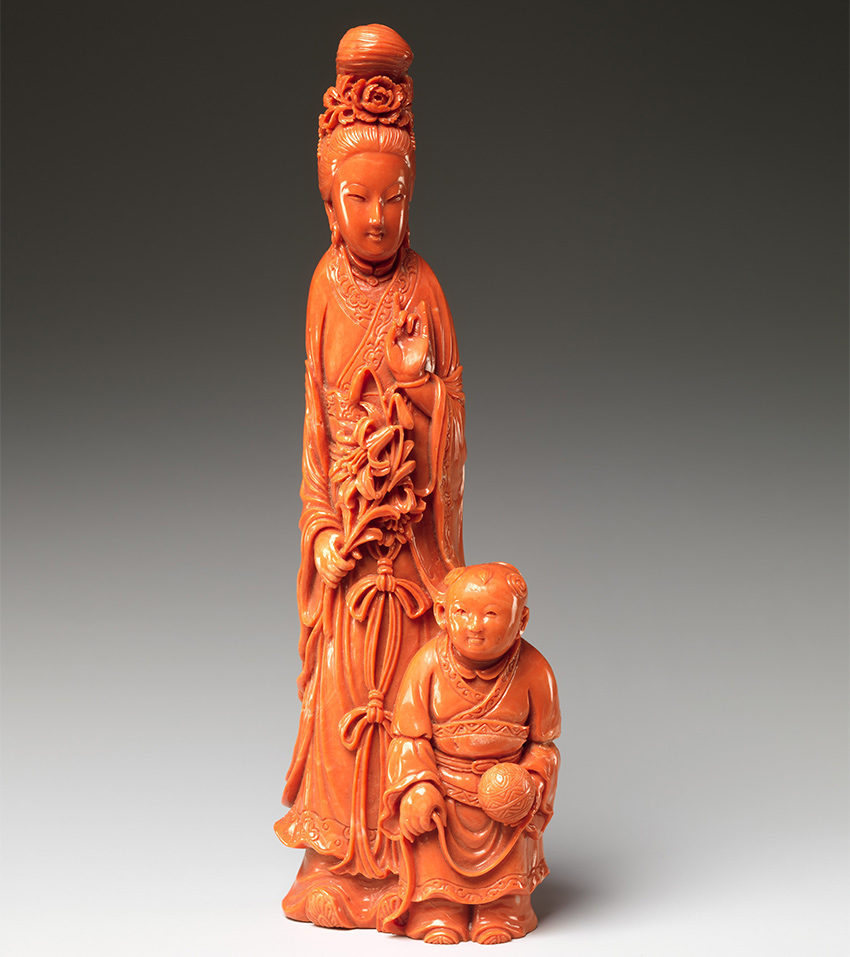 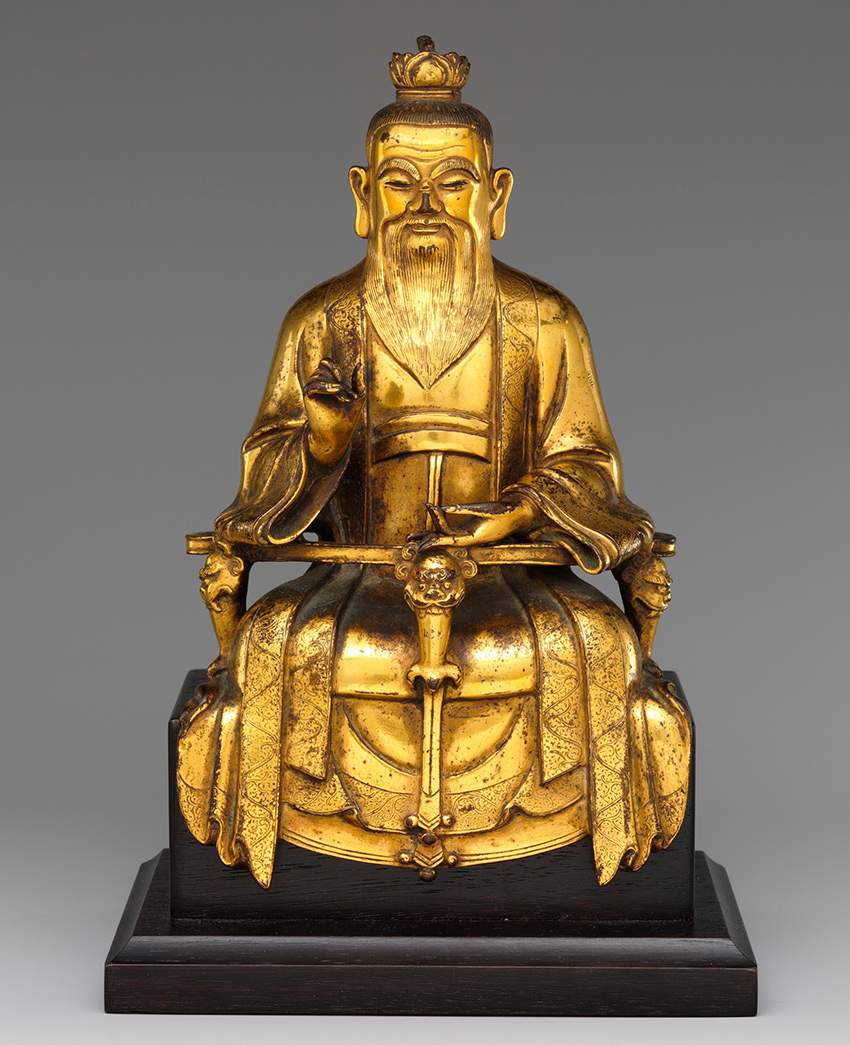 Comments: “Identified by his full beard, Laozi (also known as the Celestial Worthy of the Way and Its Virtue) is the quasi-historical author of the seminal Daoist text, the Daodejing (The Way and Its Power). Daoism, a major religion in China that can be traced to the sixth century B.C., is a term used to define an amalgamation of beliefs and practices that includes metaphysical and philosophical speculations as well as guidance for everyday life”. 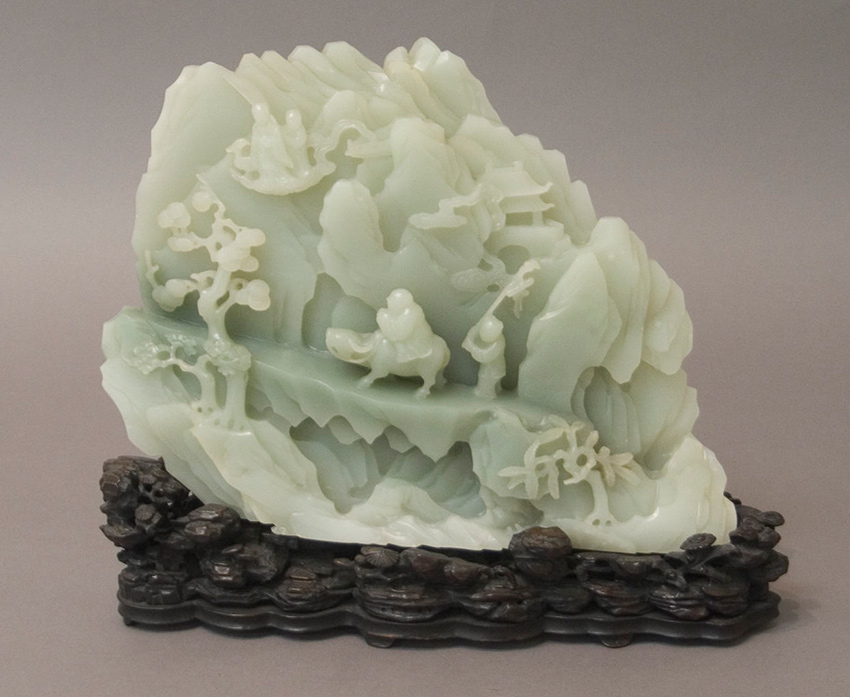 Comments: “Carved in deep relief, this object depicts Laozi, the celebrated founder of Daoism, on his way to visit Xi Wang Mu, the Queen Mother of the West. She rides on a floating cloud while awaiting his arrival”. 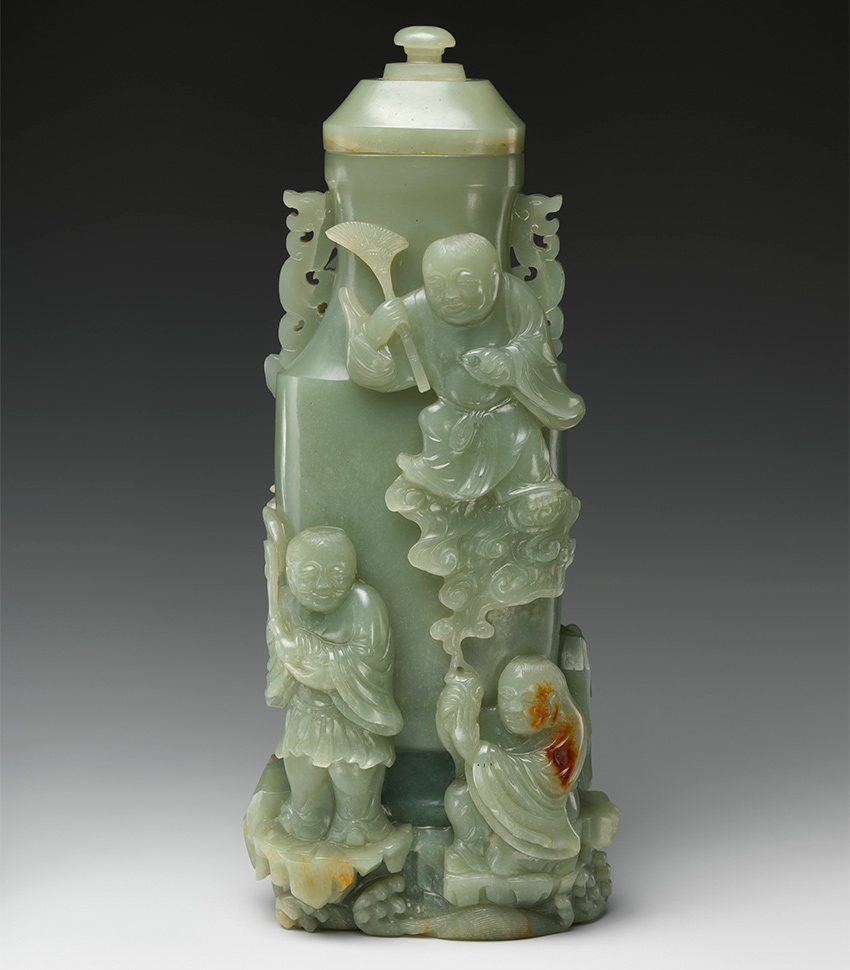 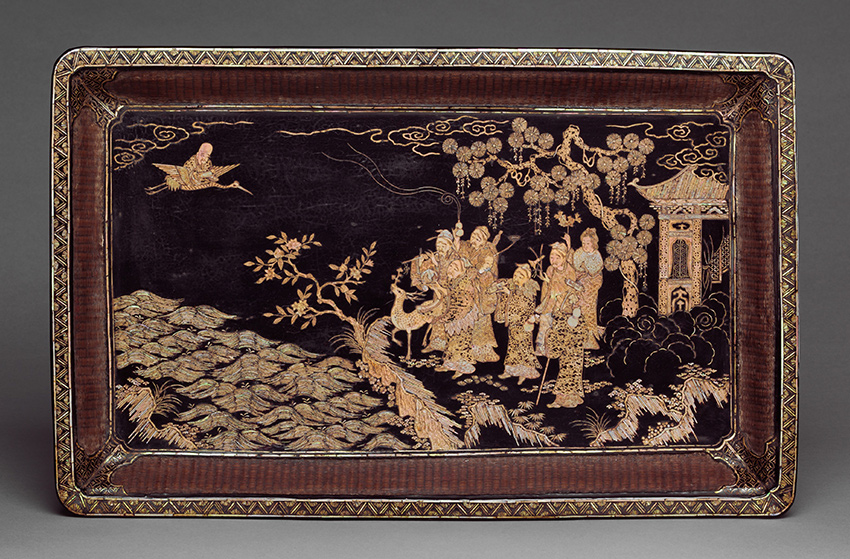 Comments: “The eight figures assembled on the riverbank represent the Eight Immortals, a group of Daoist deities who originated from the legends of the Tang dynasty (618–907). They can each be identified by their personal attributes, including the flute, staff, sword, flower, and gourd. Here, they await the arrival of Shoulao, God of Longevity, who is flying above the waves on the back of a crane. Daoism gained increasing popularity in the sixteenth and seventeenth centuries, and so did its imagery. This exquisitely decorated tray is a remarkable example”. 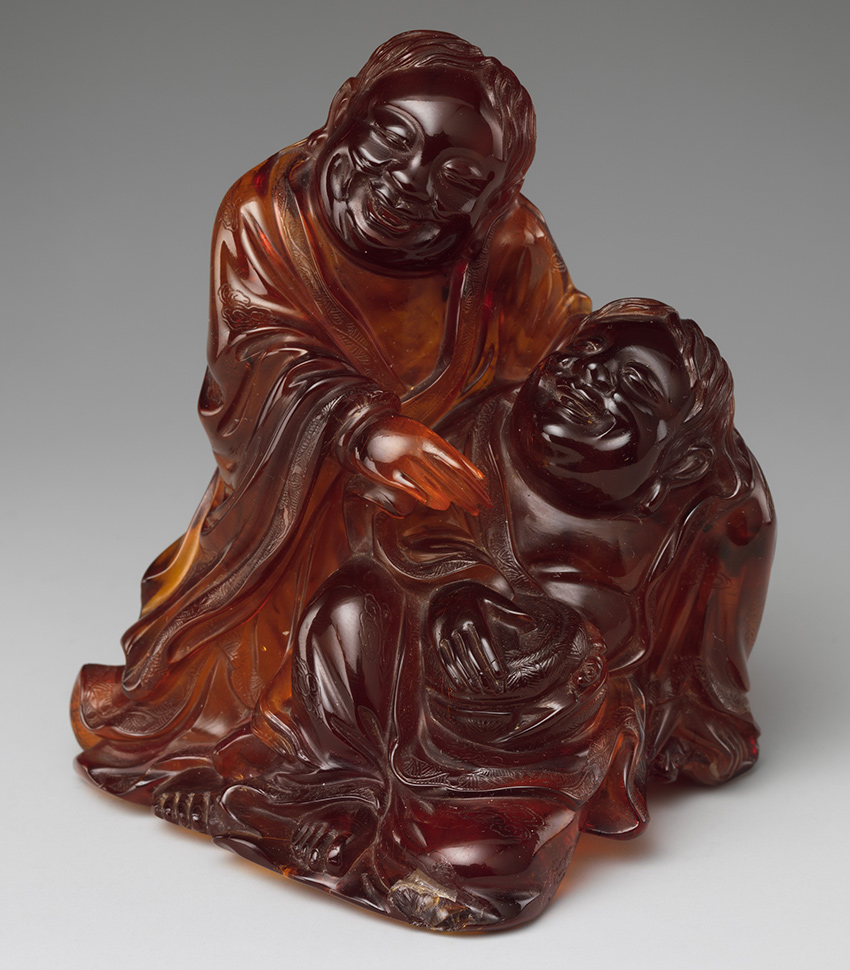 Comments: “These two figures are known as the Immortals of Harmony and Happiness (He-He Erxian). According to legend, they were originally two monks, Hanshan and Shide, who resided in the Guoqing Monastery, on the Tiantai Mountain, Zhejiang Province, during the Tang dynasty (618–907). They later became immortalized in folklore and were widely accepted as symbols of harmony and long-lasting friendship”.