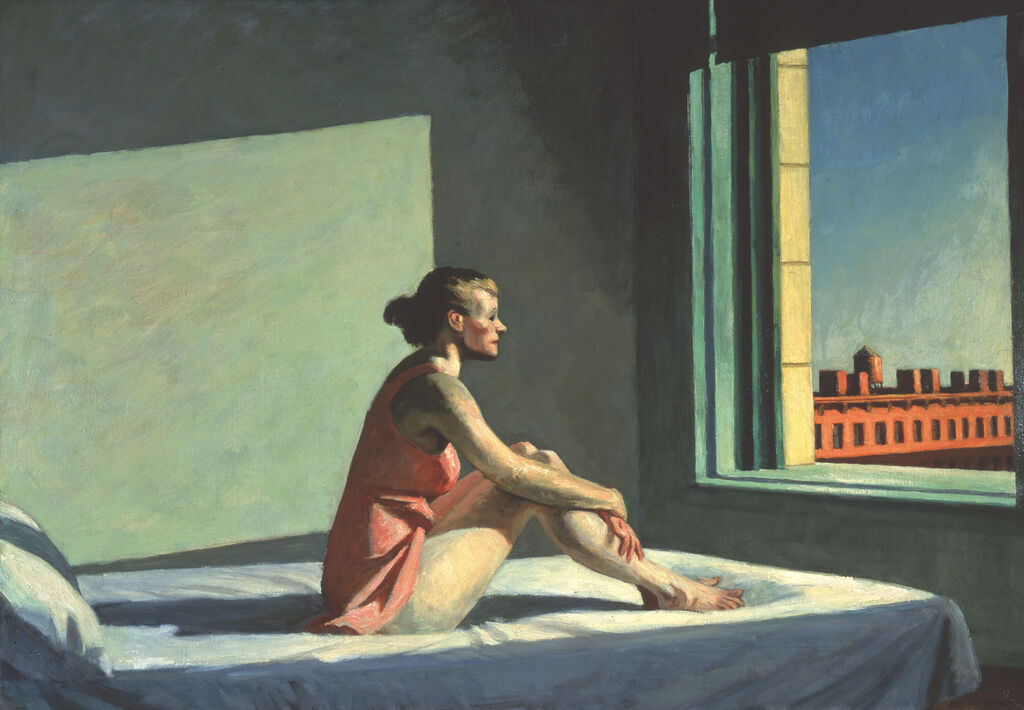 Edward Hopper was a keen observer of everyday life in New York,
which he interpreted in works of art that are perceived
with an enigmatic sense of loneliness

Hopper wanders around New York like a true voyeur without his intentions being discovered. With his painting, Hopper penetrated in an overwhelming way into the intimacy of people and things.
He freezes moments of people’s lives and portrays unusual spaces in New York, and thus reveals his other way of seeing the city he is in love with.
His paintings are the result of a deep introspection of the subject in order to extract what for him is essential: the psychological charge of the moment. 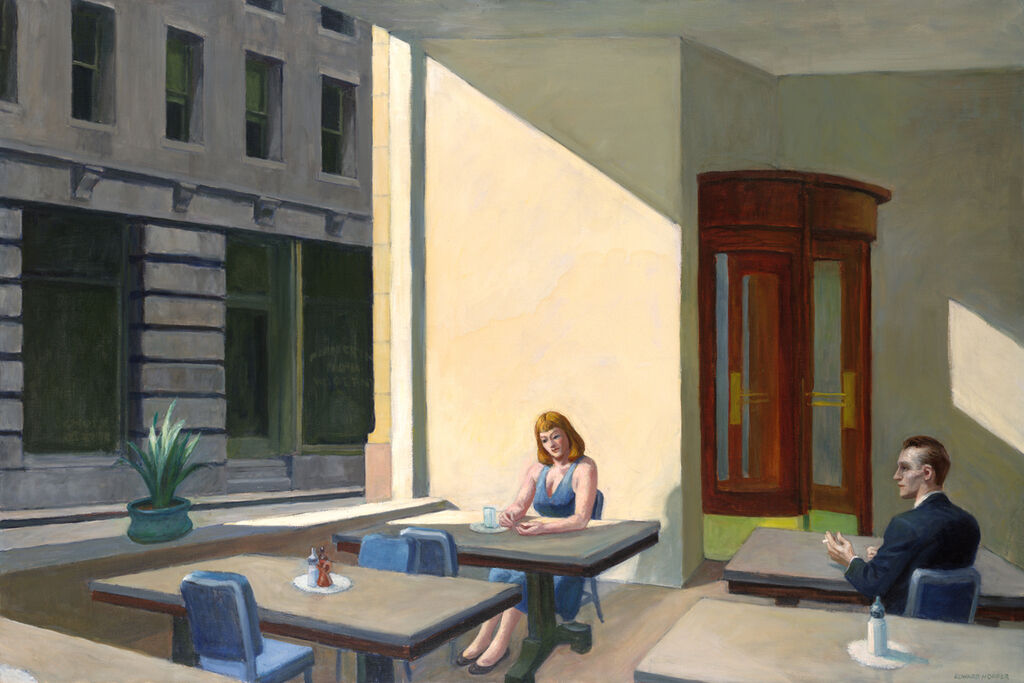 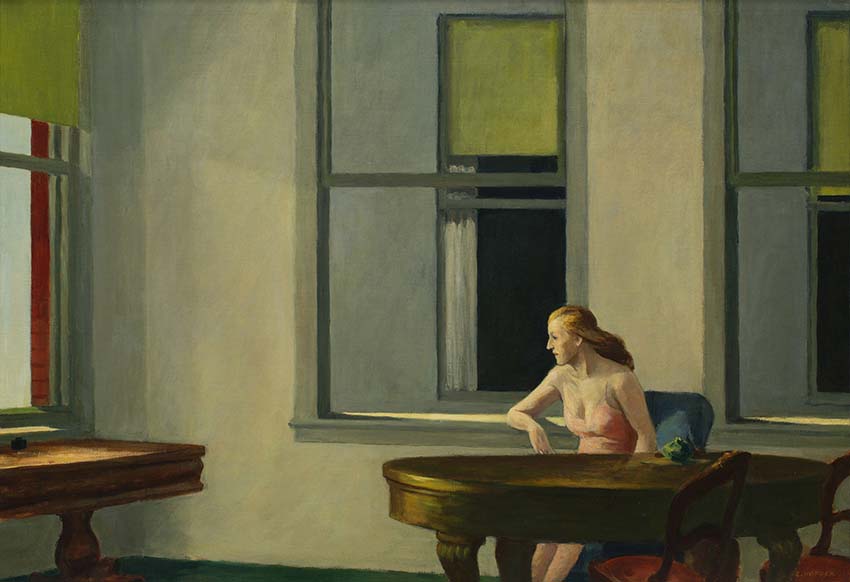 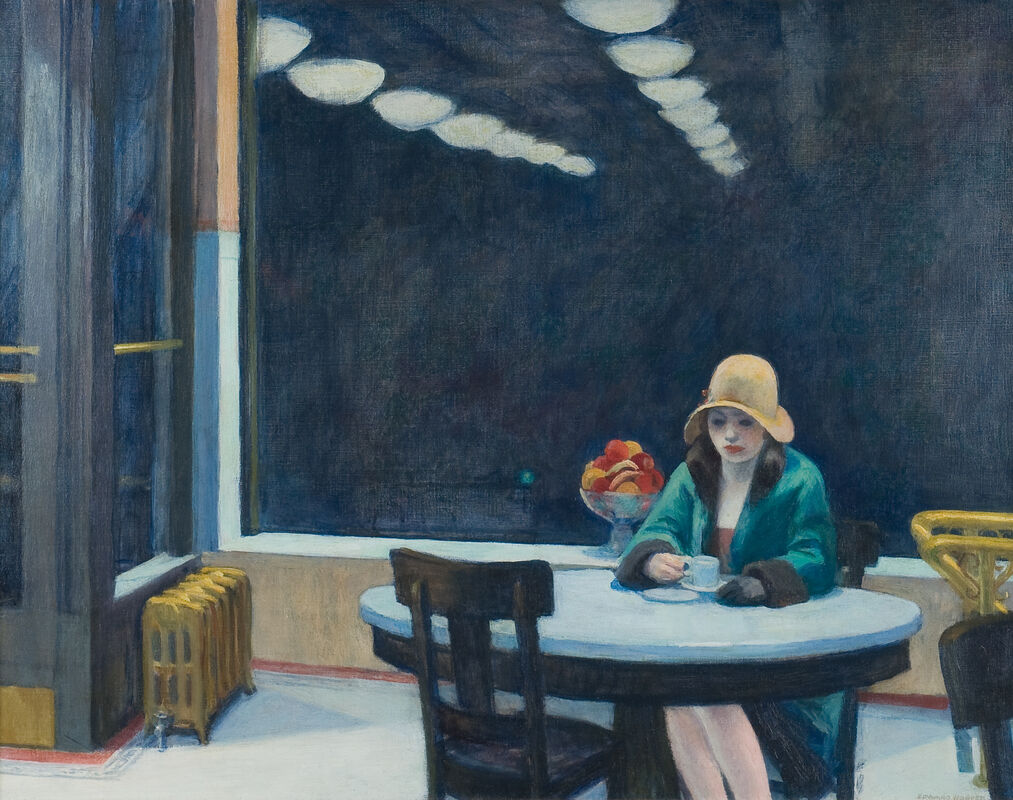 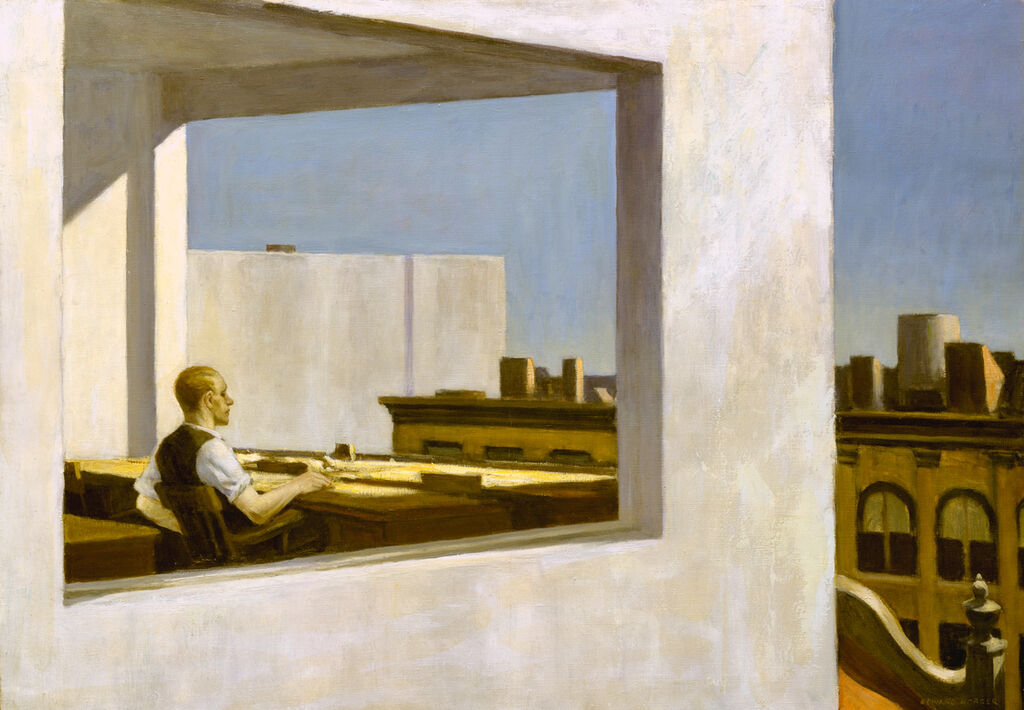 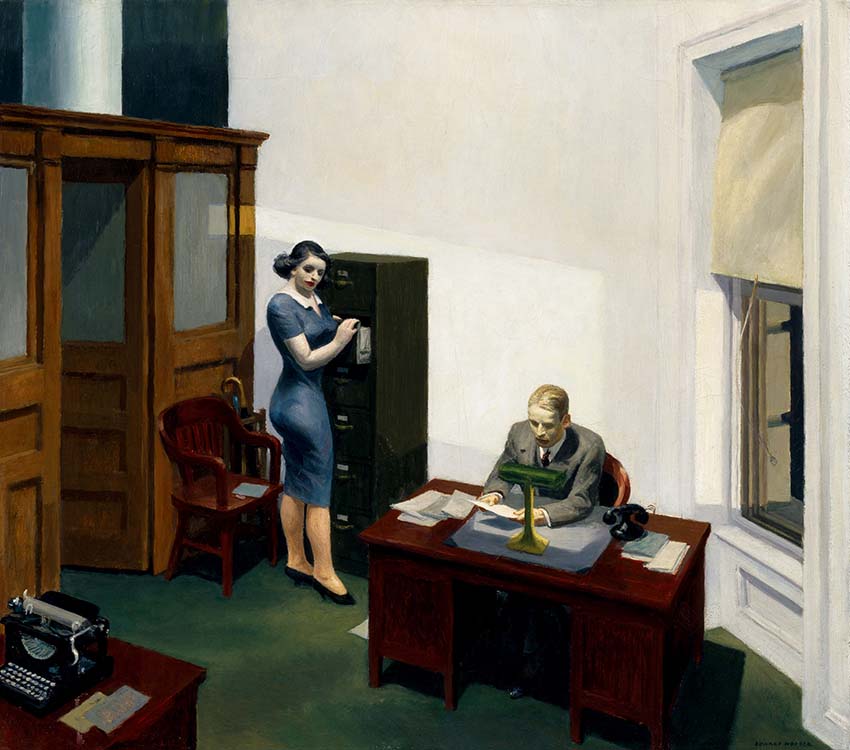 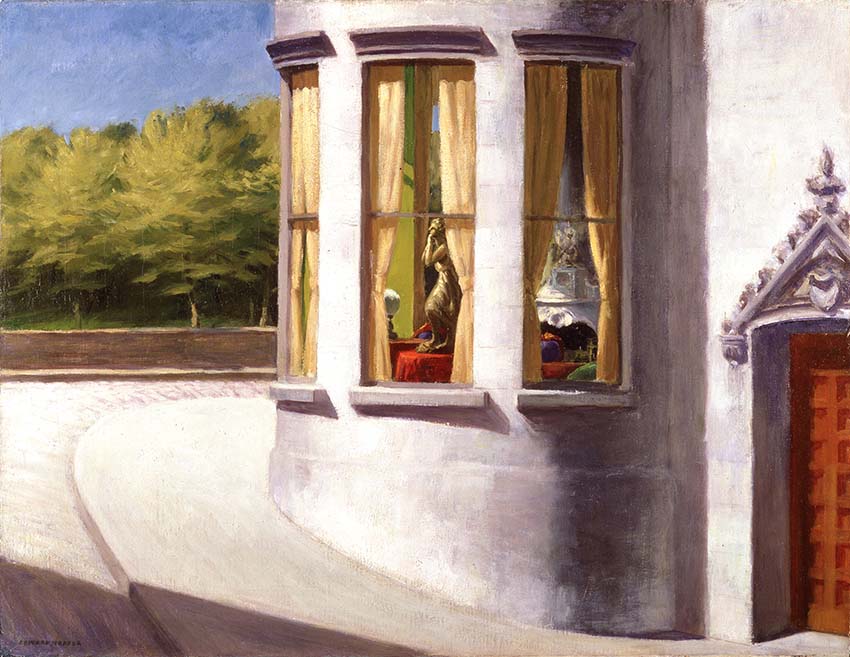 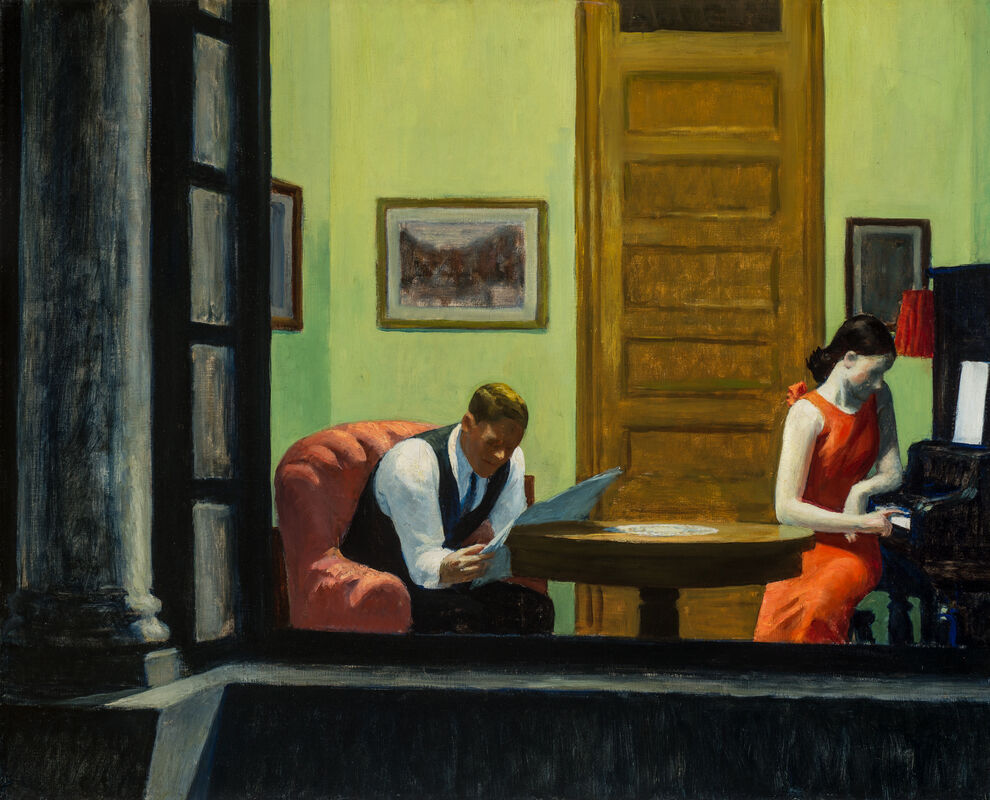 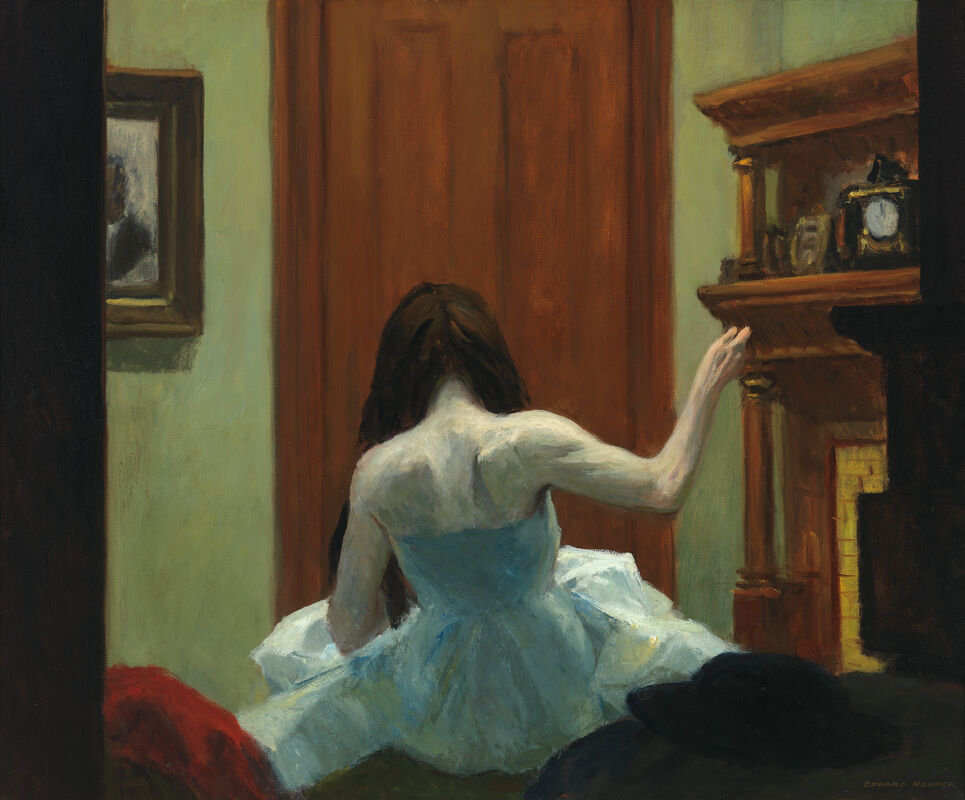 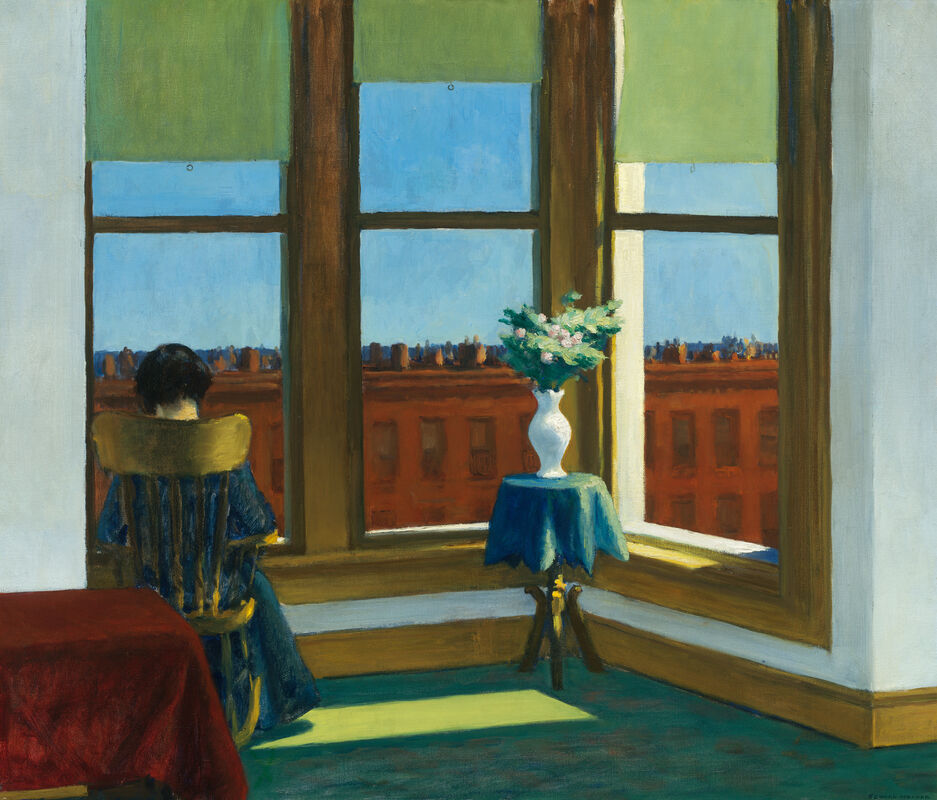 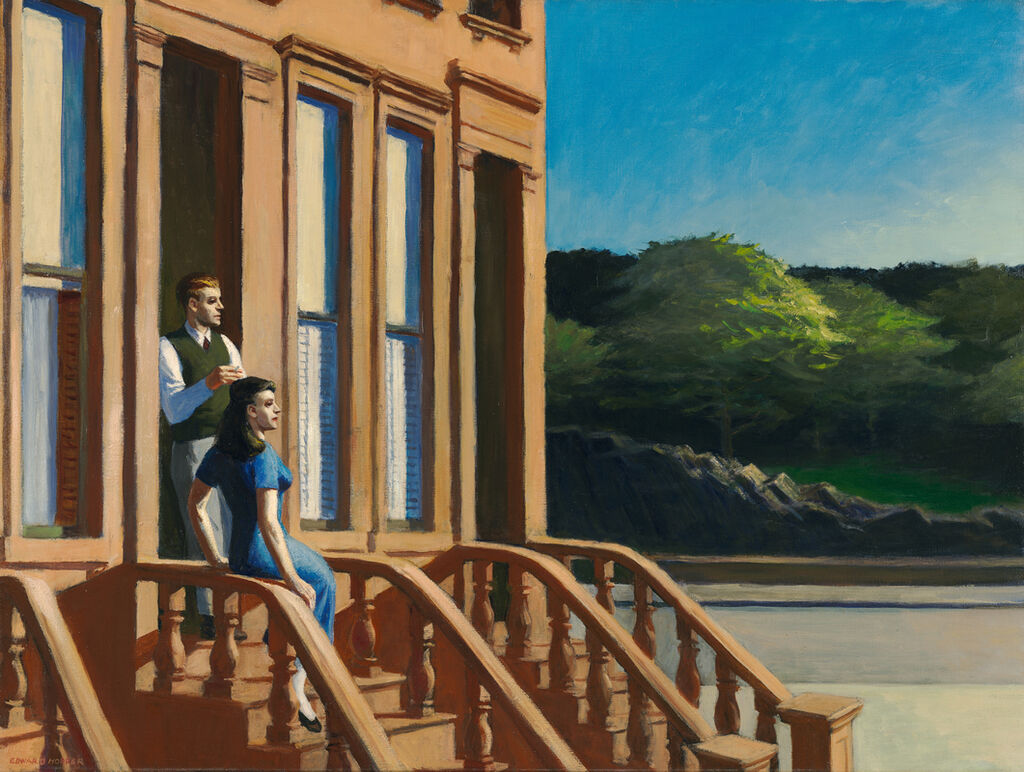 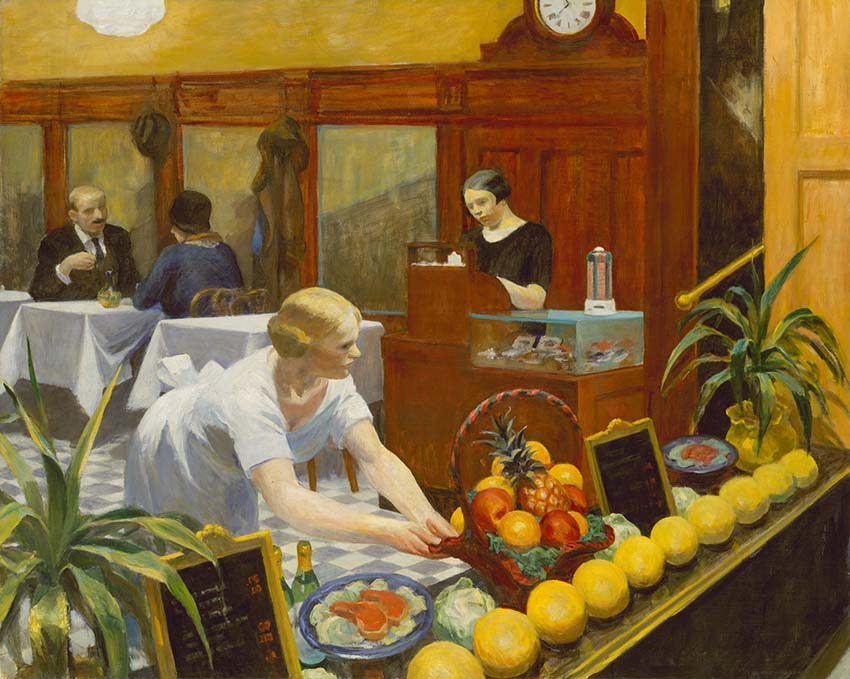 HOPPER’S NEW YORK
As giant skyscrapers grew dominating the city, Hopper ignored them and remained loyal
to the old spaces he held dear. Only buildings and modest corners of the city
have been immortalized by his palette

This masterpiece Early Sunday Morning (1930), was acquired just a few months after it was finished, would become part of the Museum’s founding collection. The Seventh Avenue building on which the painting was based was a short walk from Hopper’s studio on Washington Square. 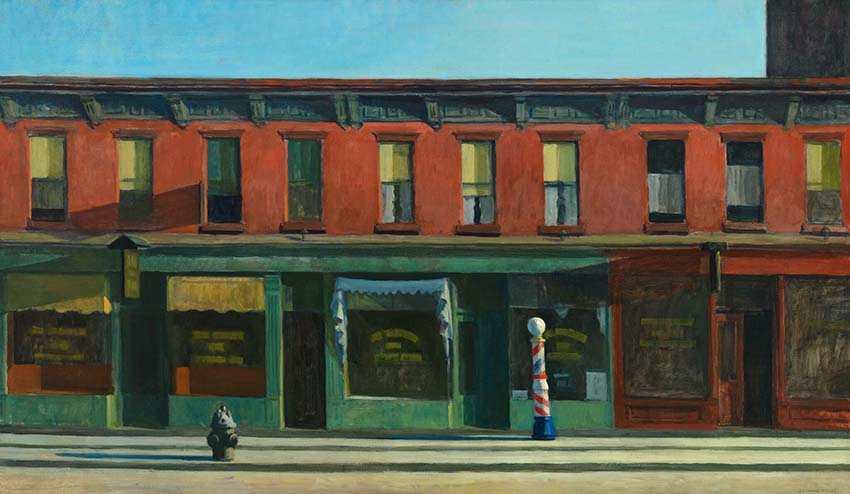 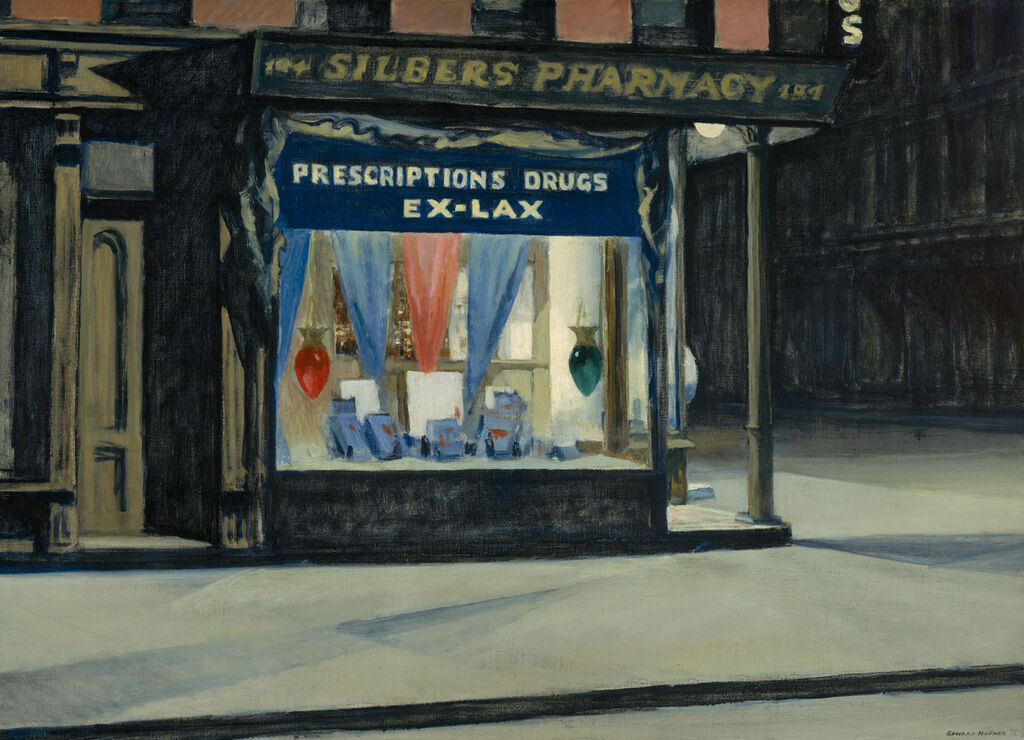 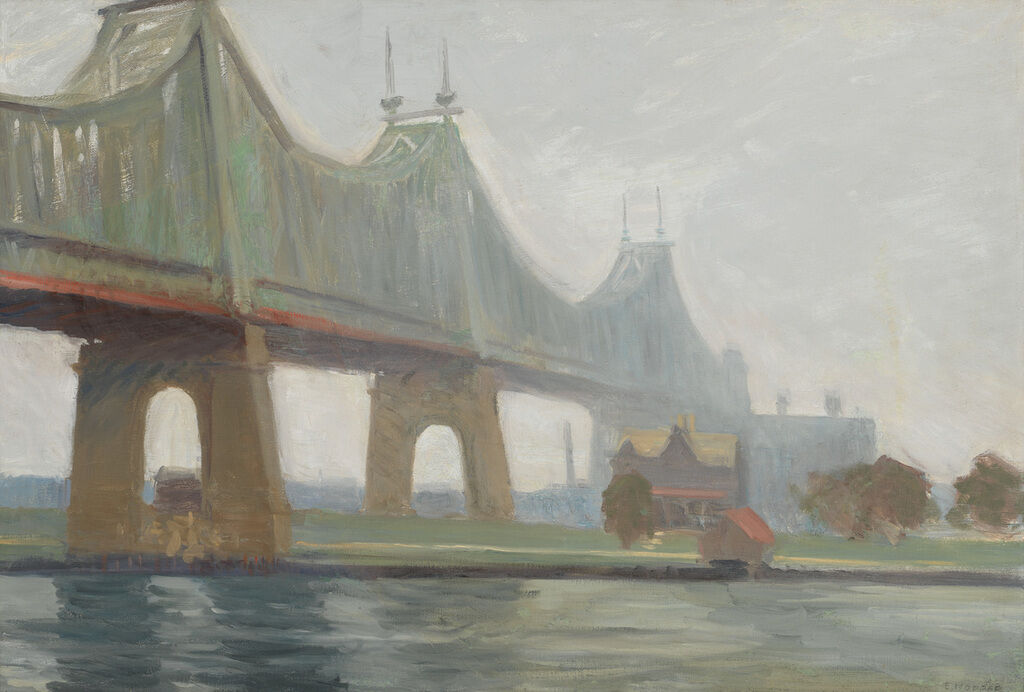 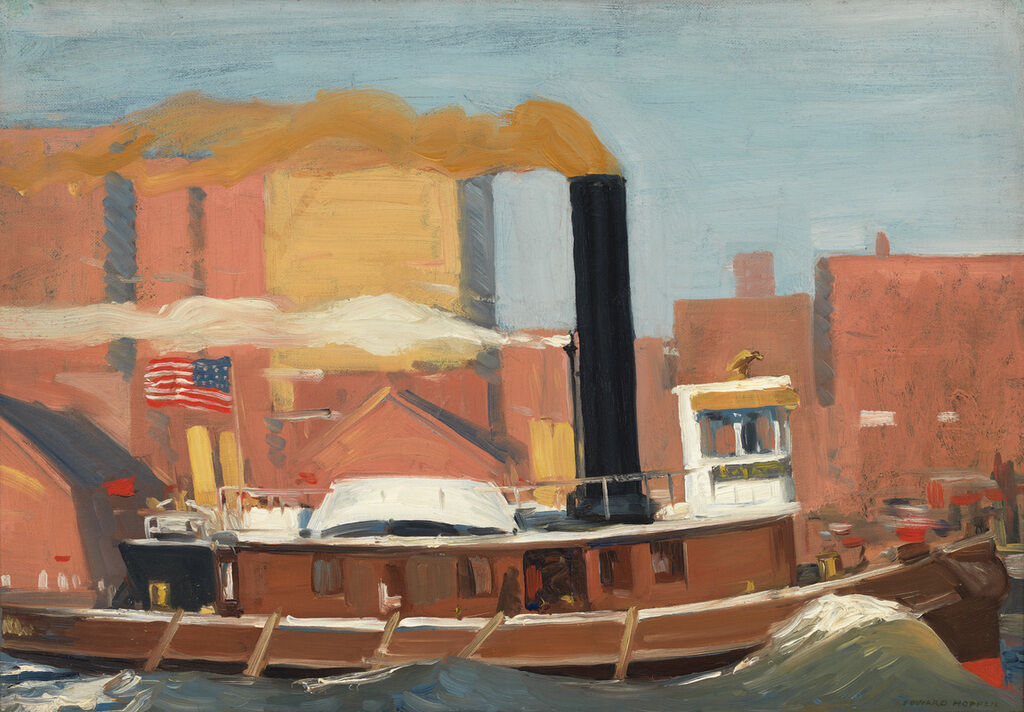 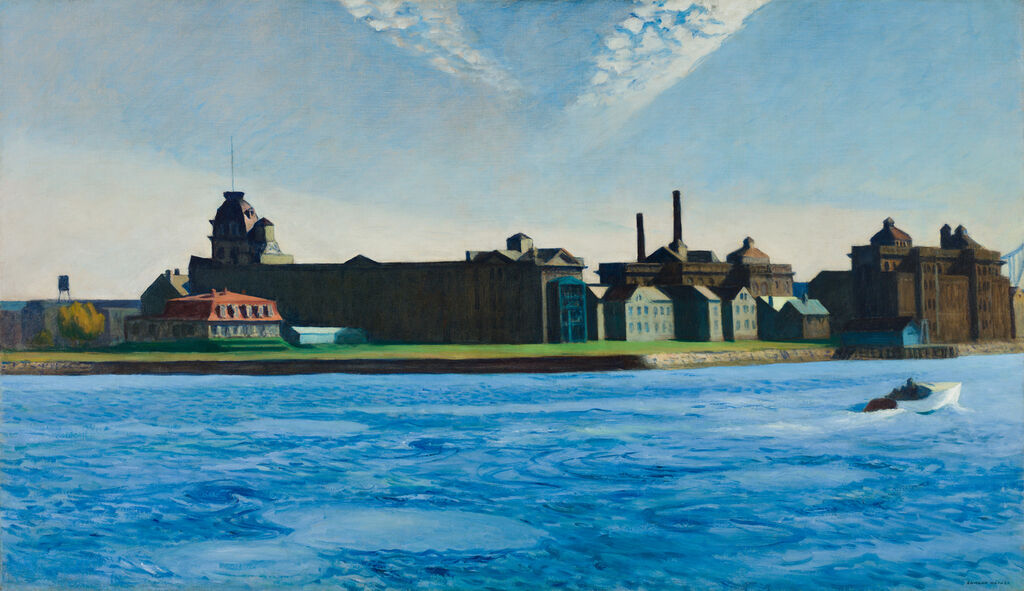 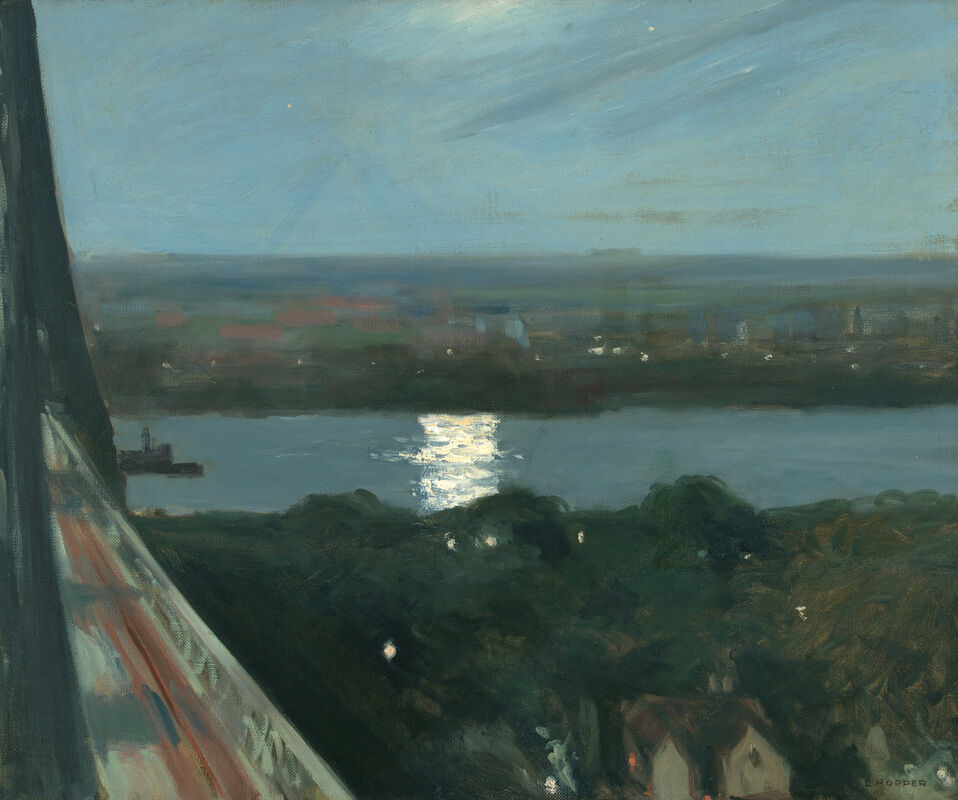 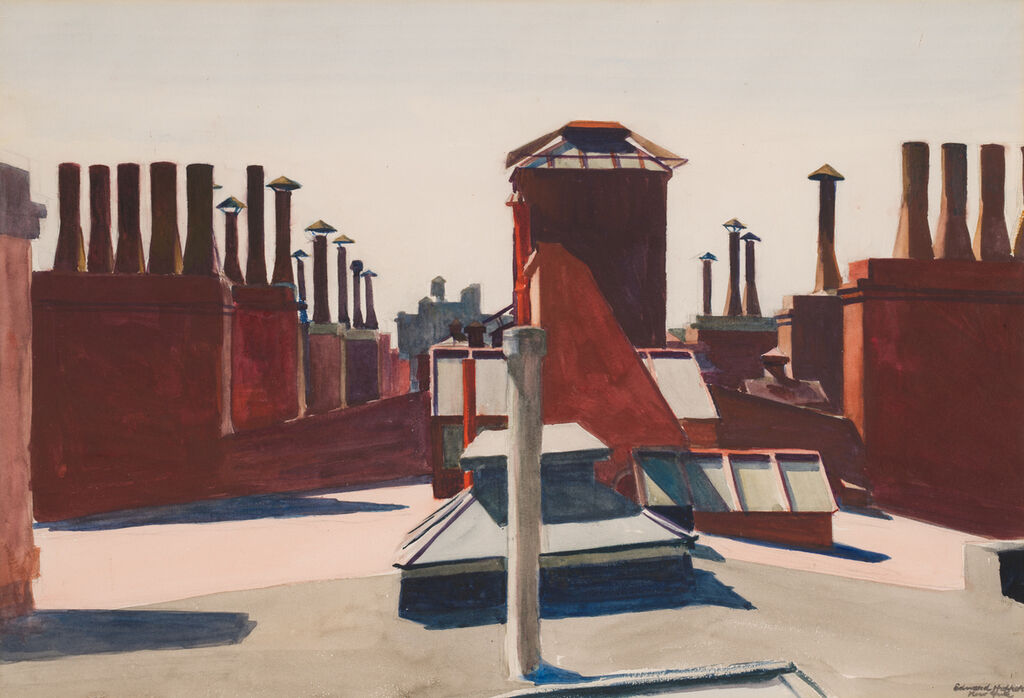 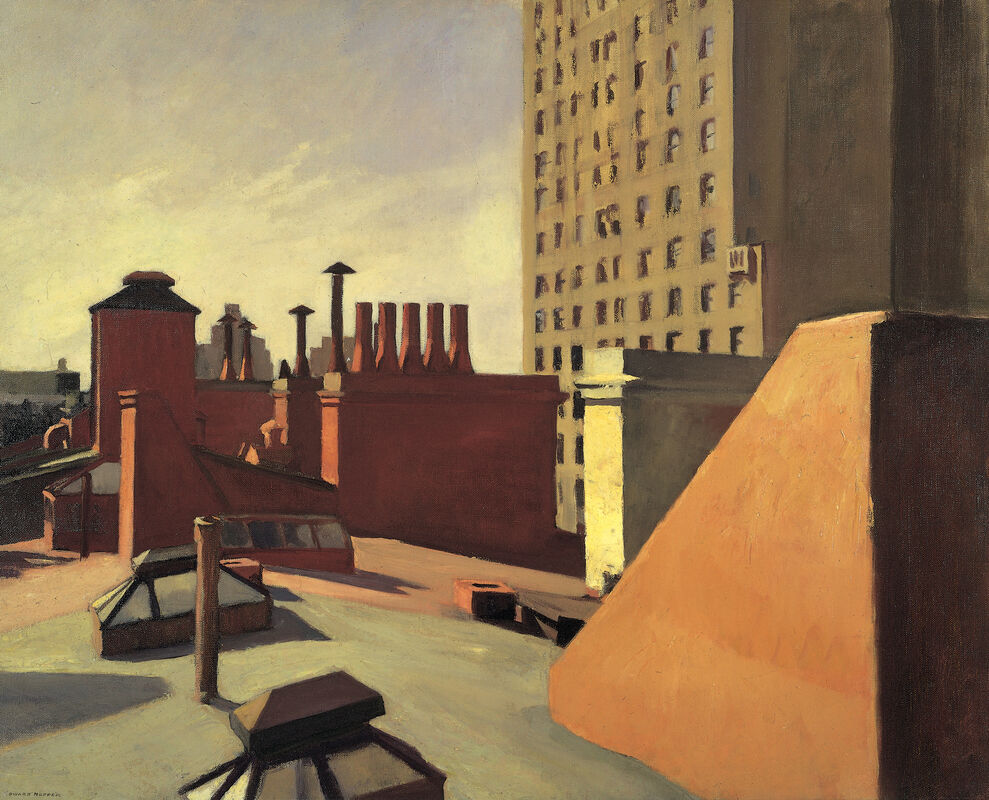 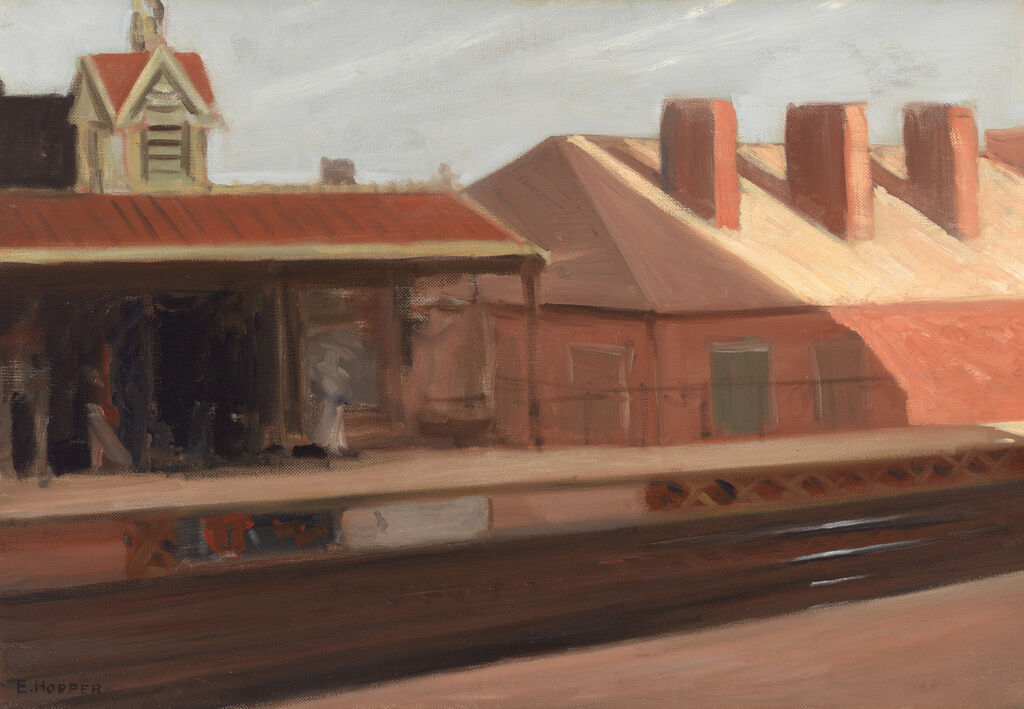 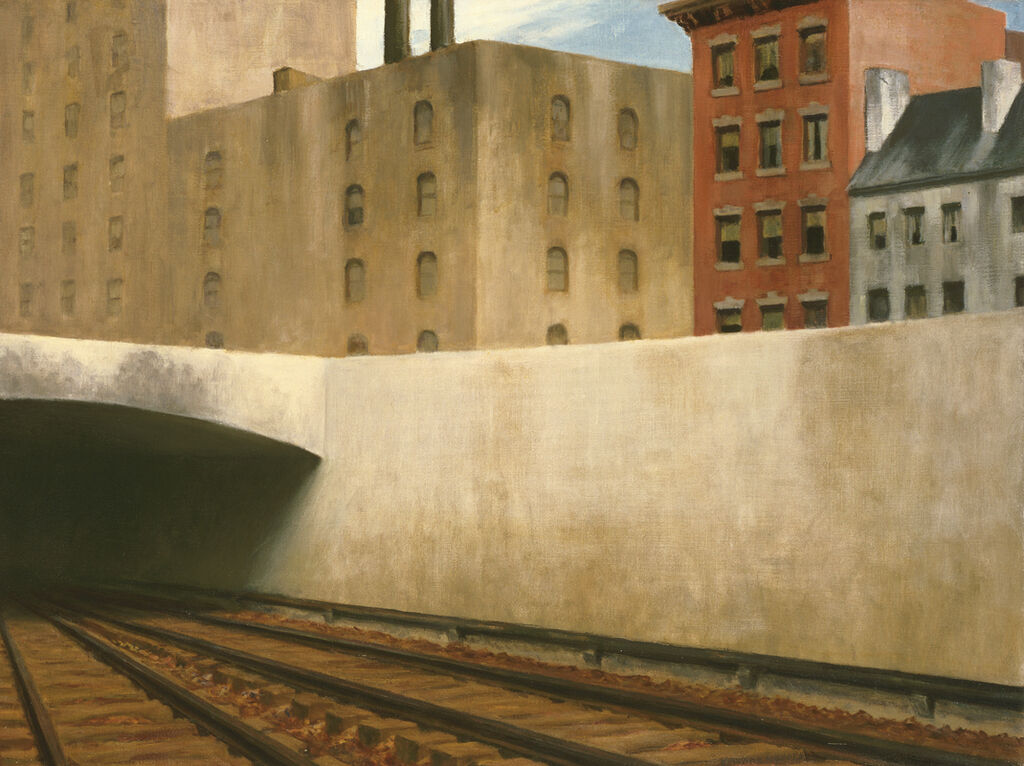 HOPPER AND THE THEATER

Hopper was passionate about the theater, and his work underscores the critical role it played as an active mode of spectatorship and a wellspring of visual inspiration. He and Jo frequented local establishments like the Sheridan Theatre, a nearby movie house, as well as the theaters clustered in Times Square’s growing entertainment district, as documented by the numerous ticket stubs they methodically annotated and kept. 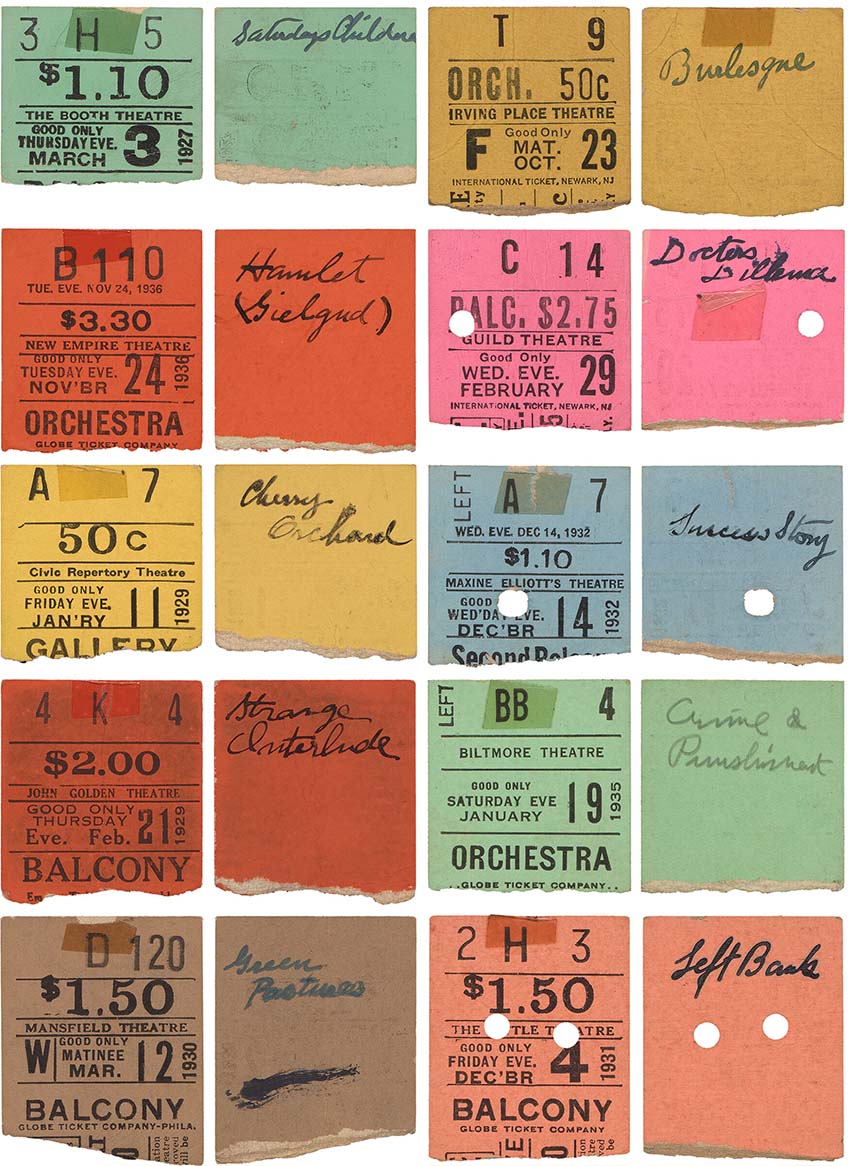 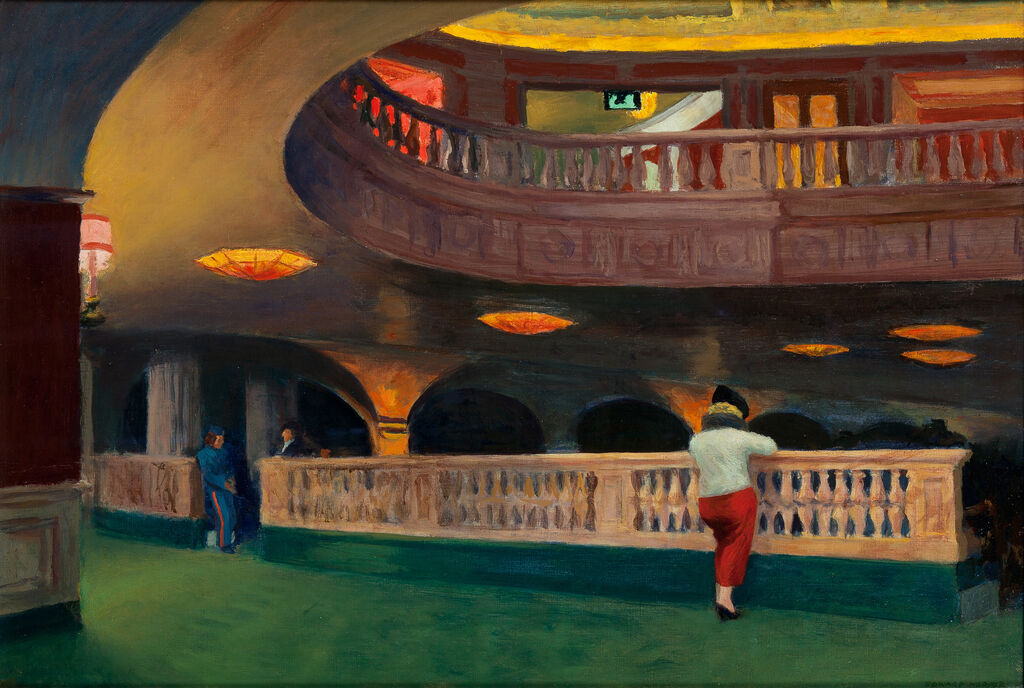 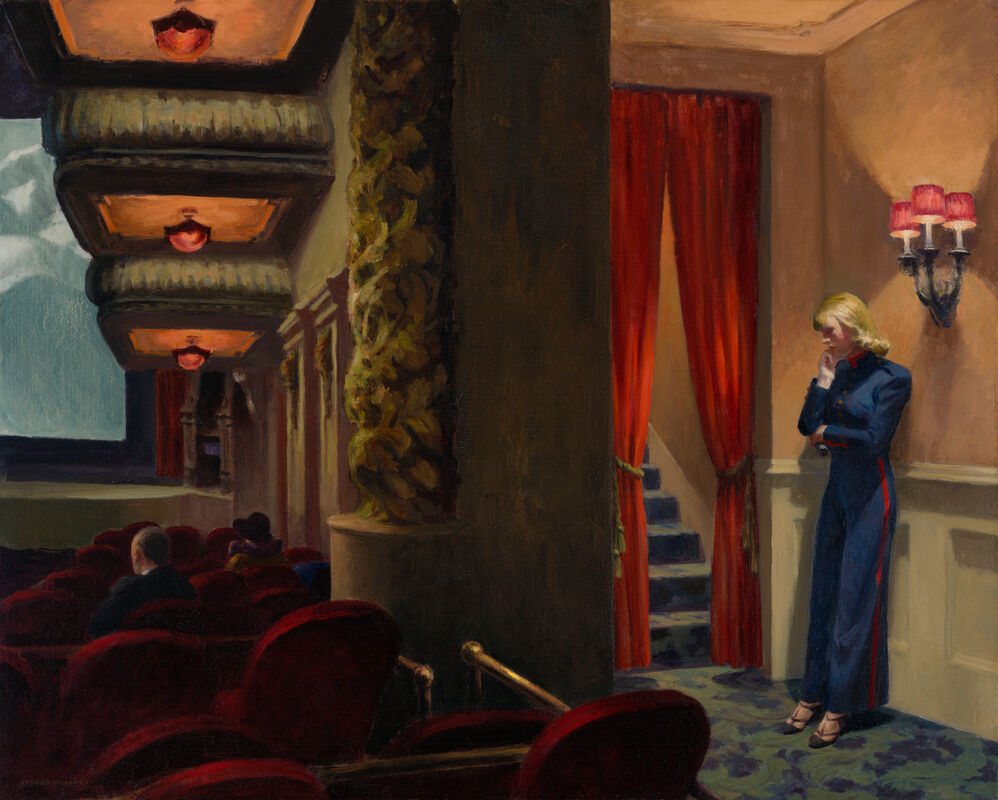 HOPPER IN BLACK AND WHITE
From 1915 to the early 1920s, he forged a rigorous printmaking practice,
consolidating many of his impressions of the city and sharpening his compositional
skills to experiment with light and shadow in black and white. 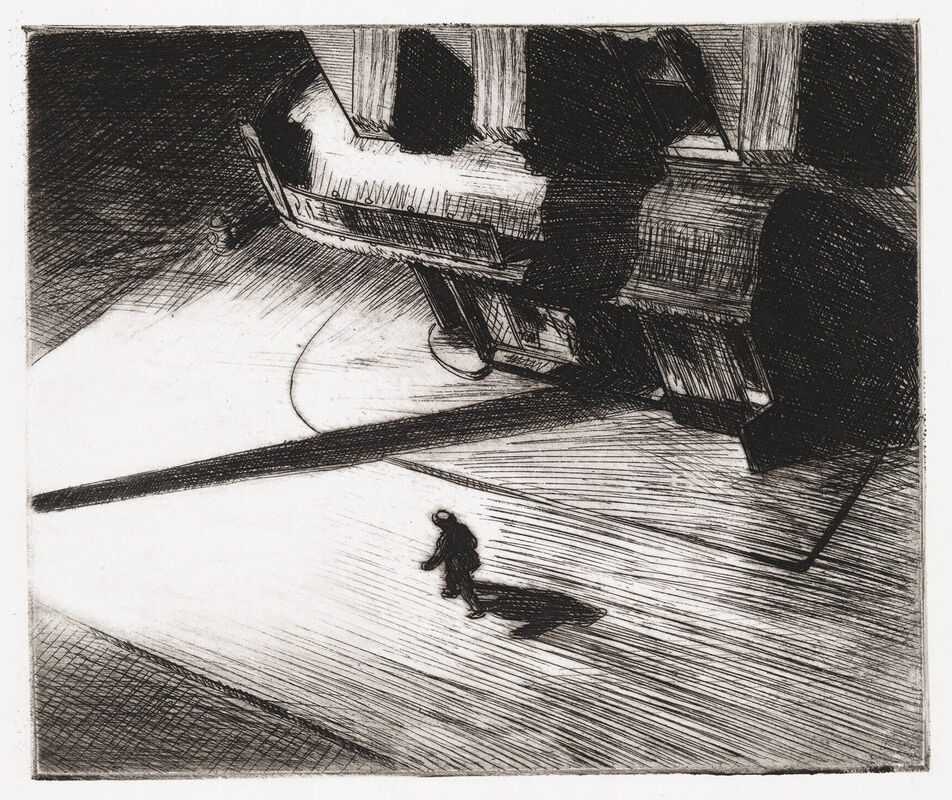 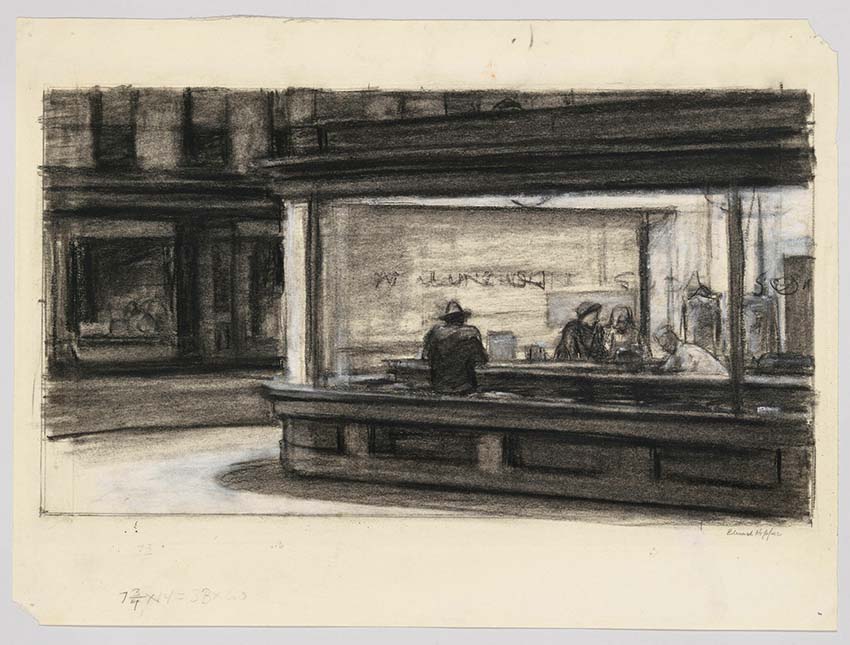 ABOUT EDWARD HOPPER and NEW YORK
“the American city that I know best and like most.”

A reflective and individualistic man, he was deeply attuned to the relationship of the self to the world, and his works increasingly focused on the psychological realities of his subjects. Hopper was frequently inspired by the two locations in which he spent most of his time: downtown New York, where he lived and worked in the same apartment on Washington Square from 1913 until his death in 1967; and Cape Cod, where, beginning in 1934, he maintained a second home and studio.
As a young artist in 1899, Hopper began commuting into the city from his hometown of Nyack—less than thirty miles north of Manhattan—to study at the New York School of Illustrating and then, one year later, at the New York School of Art. Afterward, he began pursuing freelance illustration work while continuing to paint. Funded by his commercial assignments, Hopper traveled to Paris for three extended visits between 1906 and 1910.
Several of Hopper’s preparatory studies for his paintings show his wife Josephine (Jo) Verstille Nivison, who played an active role as the sole model, often dressing in character and helping to procure props. The Hoppers’ collaboration in staging the scenes was part of Edward’s painting process.

CURATORS
This exhibition is organized by Kim Conaty,
Steven and Ann Ames Curator of Drawings and Prints,
with Melinda Lang, Senior Curatorial Assistant 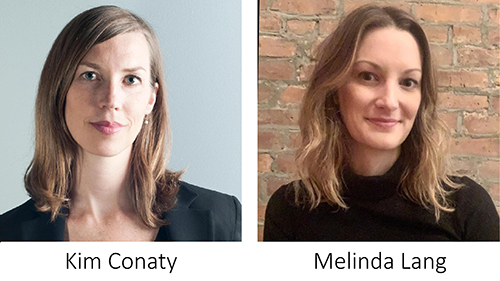 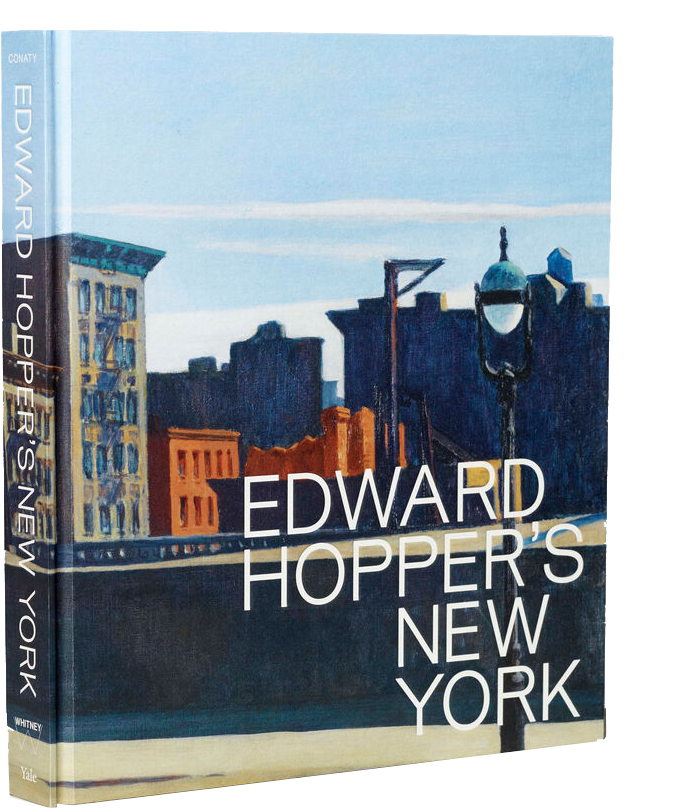 This engaging book delves into the iconic relationship between Edward Hopper (1882–1967) and New York City. This comprehensive look at an essential aspect of the revered American artist’s life reveals how Hopper’s experience of New York’s spaces, sensations, and architecture shaped his vision and served as a backdrop for his distillations of the urban experience.
During sidewalk strolls and elevated train rides, Hopper sketched the city’s many windowed facades. Exterior views gave way to interior lives, forging one of Hopper’s defining preoccupations: the convergence of public and private.
These permeable walls allowed Hopper to evoke the perplexing awareness of being alone in a crowd that is synonymous with modern urban life.

Drawing on the vast resources of the Whitney Museum of American Art, the largest repository of Hopper’s work, and the recently acquired gift of the Sanborn Hopper Archive, this book features more than 300 illustrations and fresh insight from authoritative and emerging scholars.