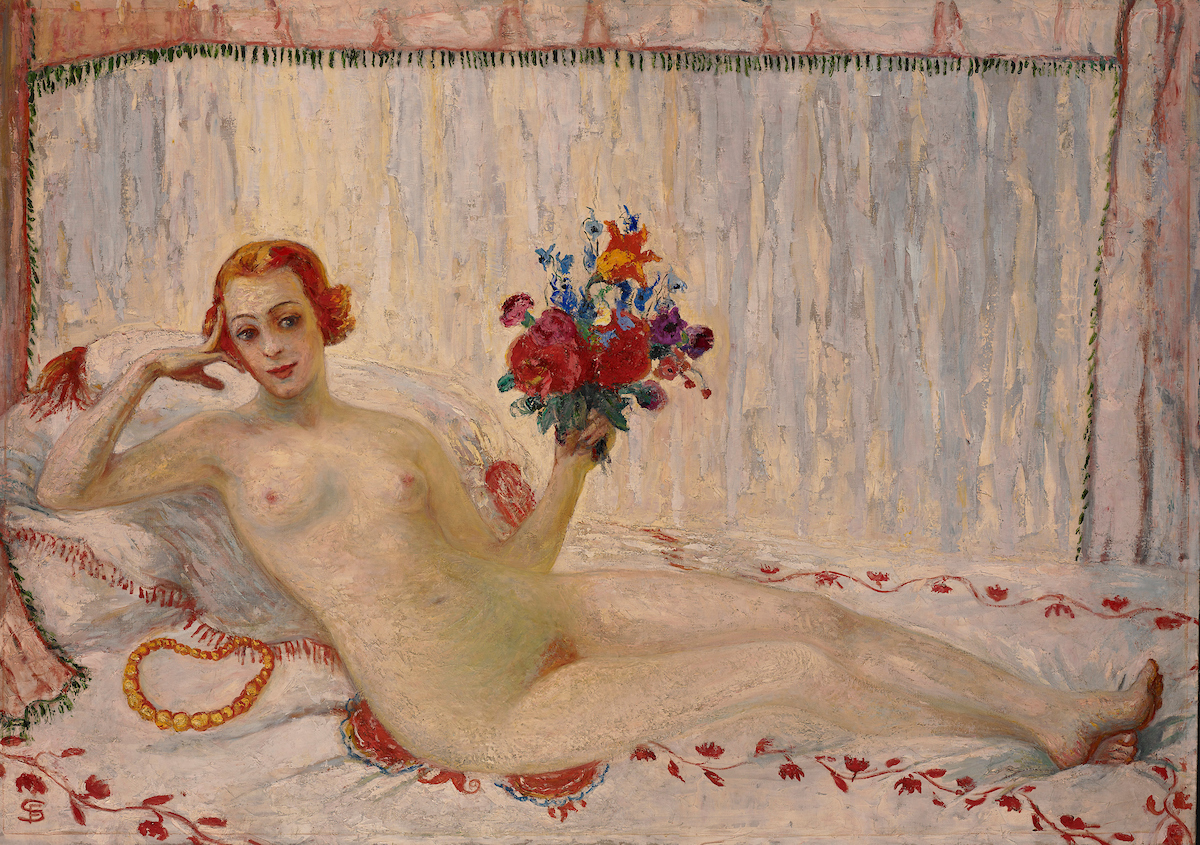 The exhibition showcases over 50 paintings and drawings in addition
to costume and theater designs, photographs, and ephemera 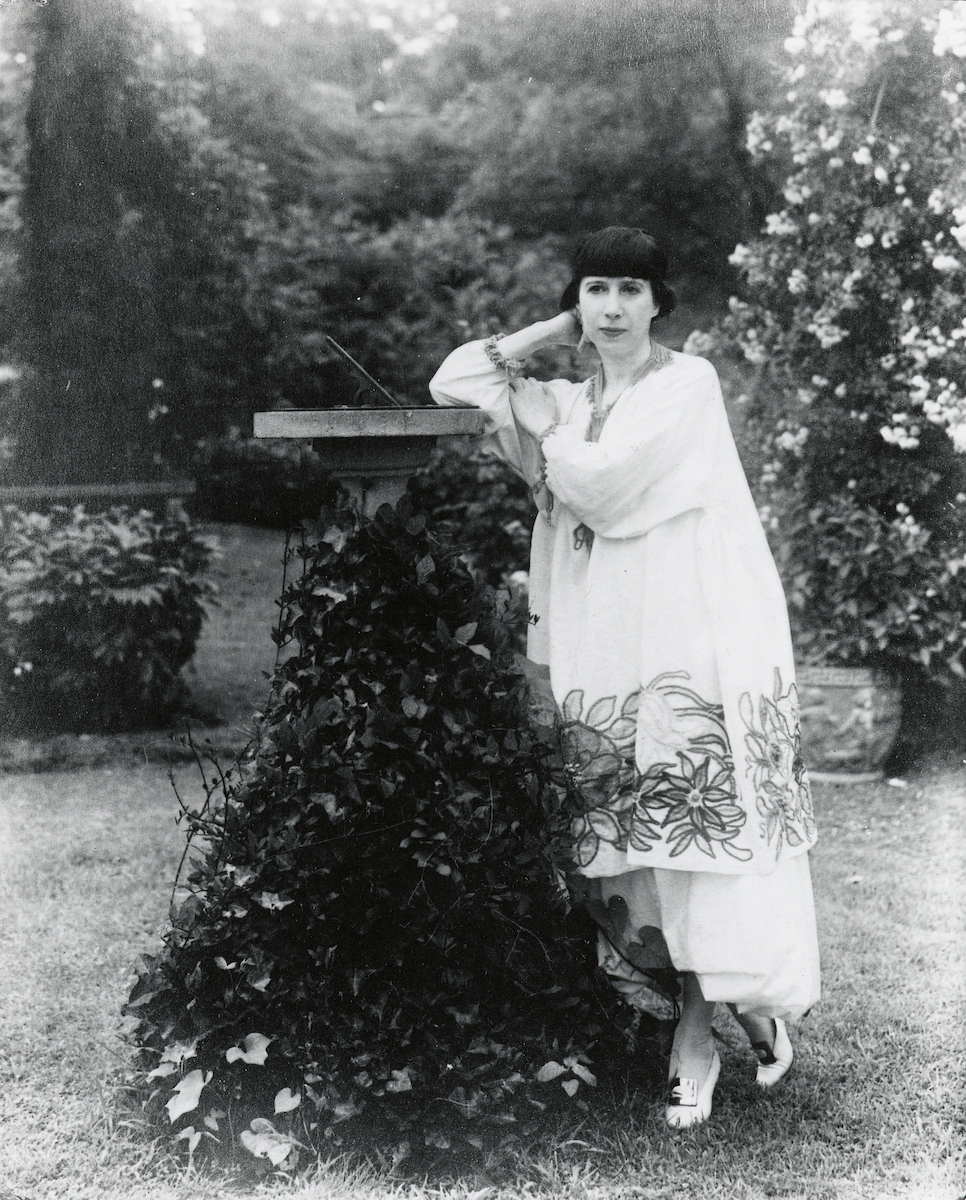 Born to a wealthy Jewish family, in Rochester, New York, Stettheimer studied at the Art Students League in New York City and then in Europe, where she encountered two profound influences: the Symbolist painters and poets, and the Ballets Russes. Stettheimer’s return to New York in 1914, as World War I began, was a turning point for the artist, who was then in her mid-40s.

Stephen Brown, Neubauer Family Foundation Associate Curator, The Jewish Museum, notes:
“Stettheimer has sometimes been typecast as a lightweight feminine artist with a whimsical bent,”
“This view is belied by her powerful thinking of portraiture and her astute adaptation of European vanguard ideas, most notably Symbolism, to uniquely American imagery.”

Works from all periods of the artist’s life

The works in Florine Stettheimer: Painting Poetry are drawn from all periods of the artist’s life, with Head of a Girl (1887-88), a pencil drawing Stettheimer made when she was just 16 years old, being one of the earliest works on view. Offers a timely reconsideration of this influential American artist with a sharp satirical wit, placing her centrally in the modern dialogue of high and mass culture.

She made her New York art debut with a solo show at the prestigious Knoedler Gallery, but it proved disappointing, attracting lukewarm press and no sales. She and her sisters Carrie and Ettie, and their mother, Rosetta, then developed a stratagem for unveiling her new works, characteristic of the period: parties.
Their elite salon attracted many of the leading lights of the artistic vanguard, including her close friend Marcel Duchamp, as well as Alfred Stieglitz, Carl Van Vechten, Georgia O’Keeffe, Elie Nadelman, Gaston Lachaise, and many others. Flamboyant and epicurean, Stettheimer was an astute commentator on her social milieu. 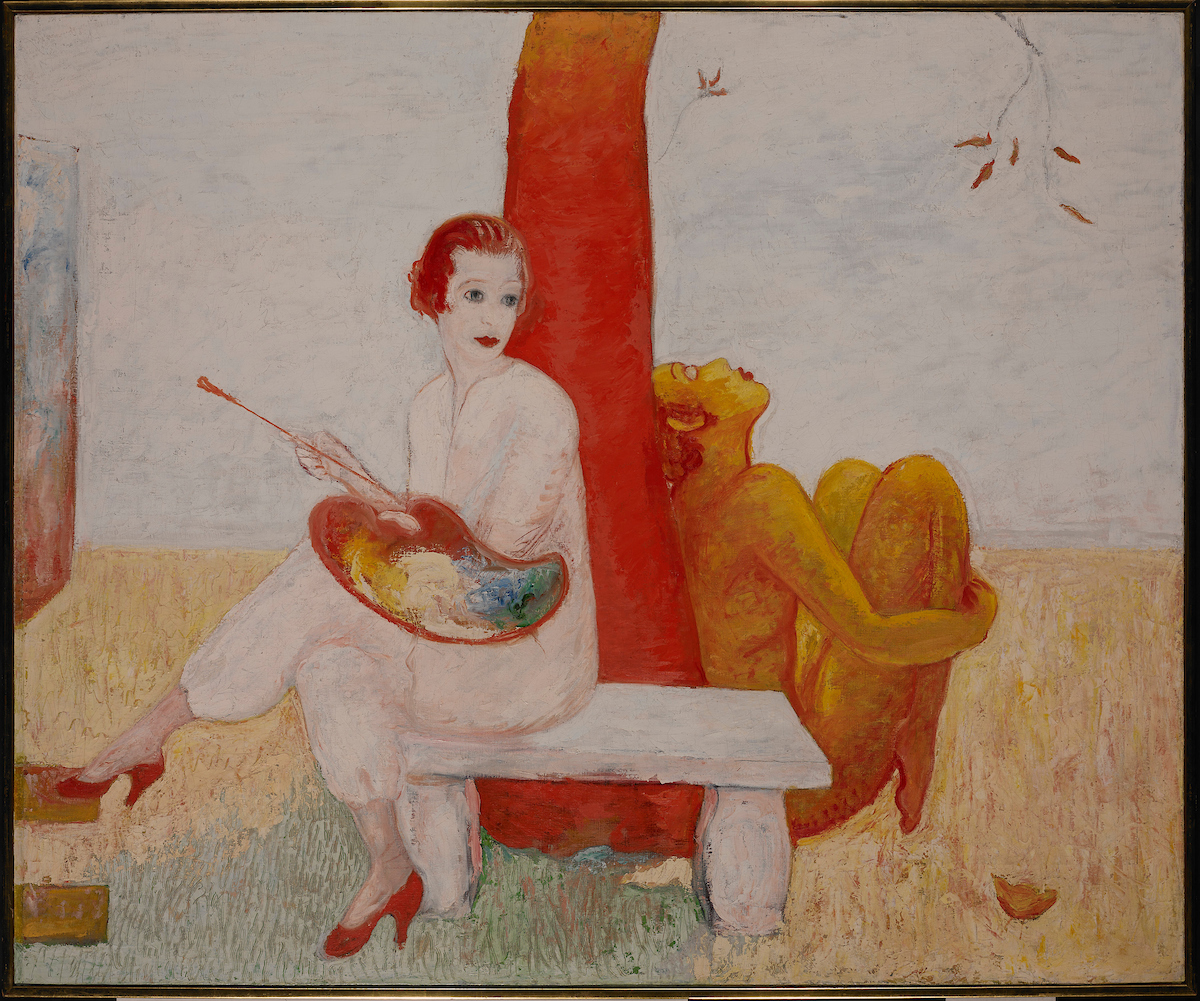 The exhibition presents Stettheimer’s work in the context of the social and intellectual environment of early twentieth-century New York, exploring the artist’s fascinating position as an American modernist whose work exuberantly reflects on the mass culture of her times. Over four decades of cultural development, from the Gilded Age to the Jazz Age, the exhibition examines Stettheimer’s unique artistic style, her position as a link between groups within the New York art world, and her continued influence on artistic practice today.

Style typified in the painting Picnic at Bedford Hills (1918). The figures are painted in a miniaturized, self-consciously naïve manner that draws from folk art and Art Deco fashion illustration. Stettheimer’s family and friends, and herself, are the subjects of the painting: her sister Carrie and good friend Duchamp set out a picnic, and sculptor Elie Nadelman is sprawled out near her sister Ettie. 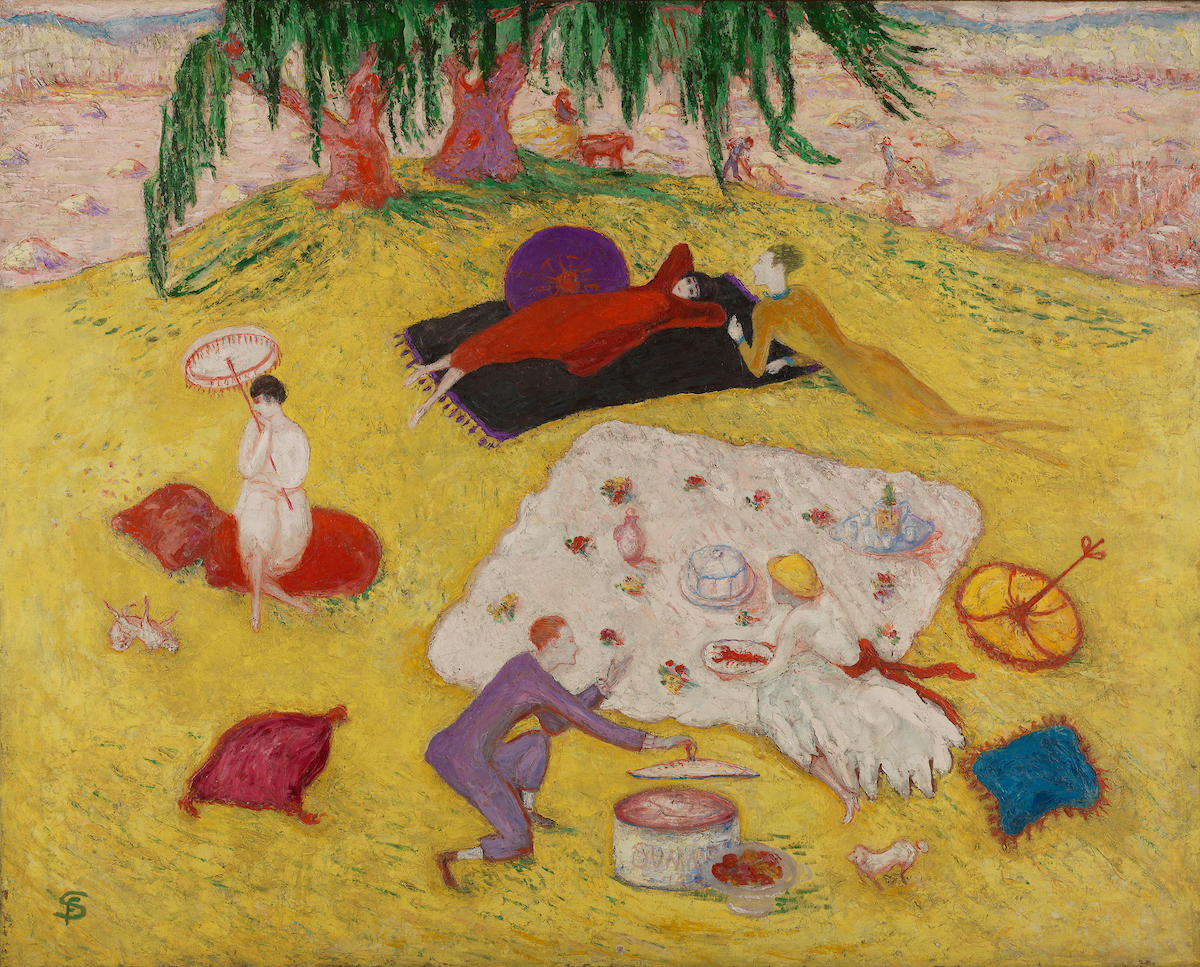 Stettheimer’s satirical wit shines in Asbury Park South (1920). The painting features brilliant yellow tones and the lively movement of the black and white beachgoers intermingling on the New Jersey beach, when, in reality, Asbury Park was a segregated beach. Again, Stettheimer depicts members of her inner circle, including Duchamp and writer Carl Van Vechten. Stettheimer includes herself in the festivities, just right of center, under a green parasol. 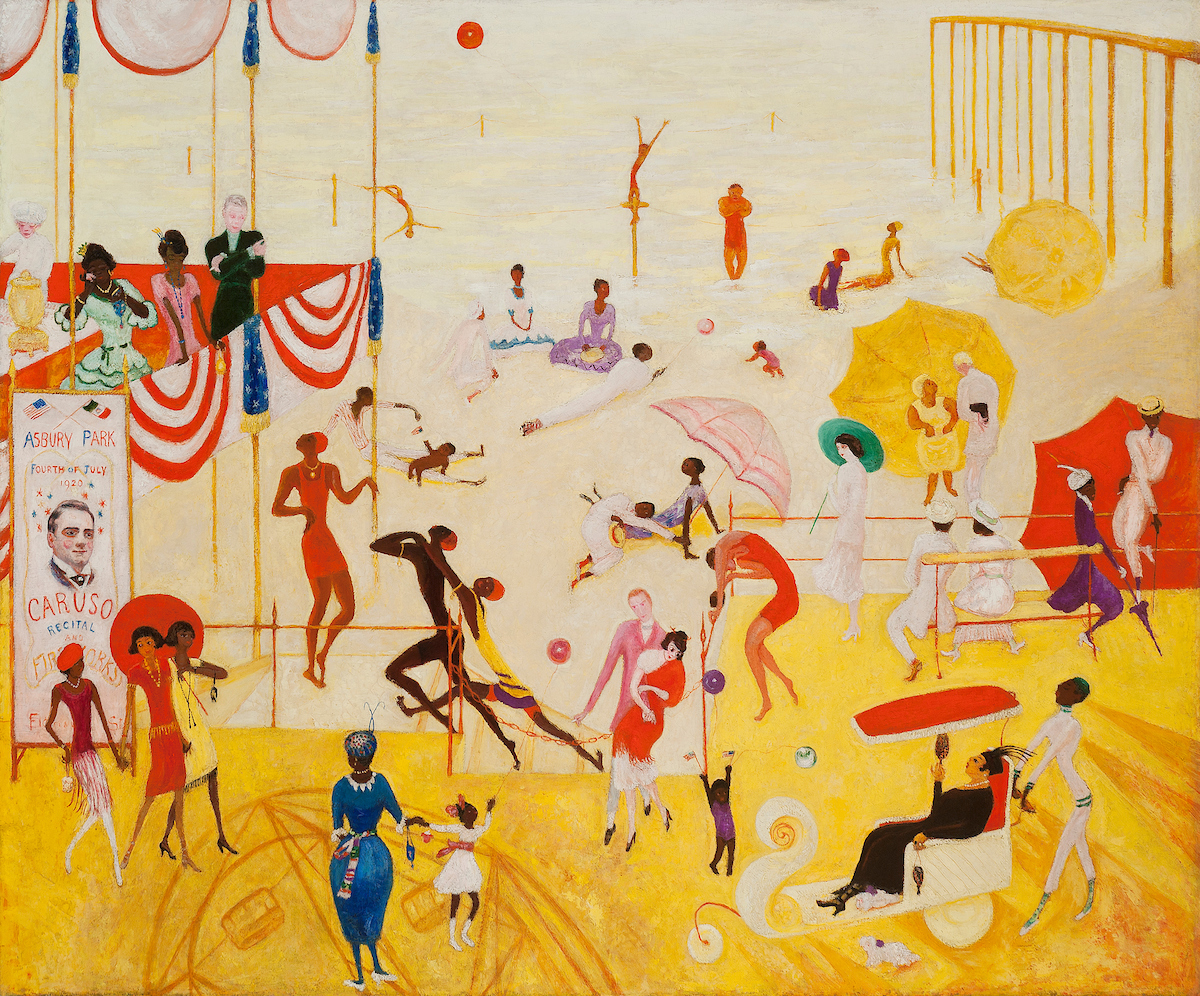 Florine Stettheimer, Portrait of Myself, 1923, Oil on canvas laid on board, 40⅜ x 26⅜ in.  Art Properties, Avery Architectural and Fine Arts Library, Columbia University in the City of New York, Gift of the Estate of Ettie Stettheimer, 1967.  1967.17.005 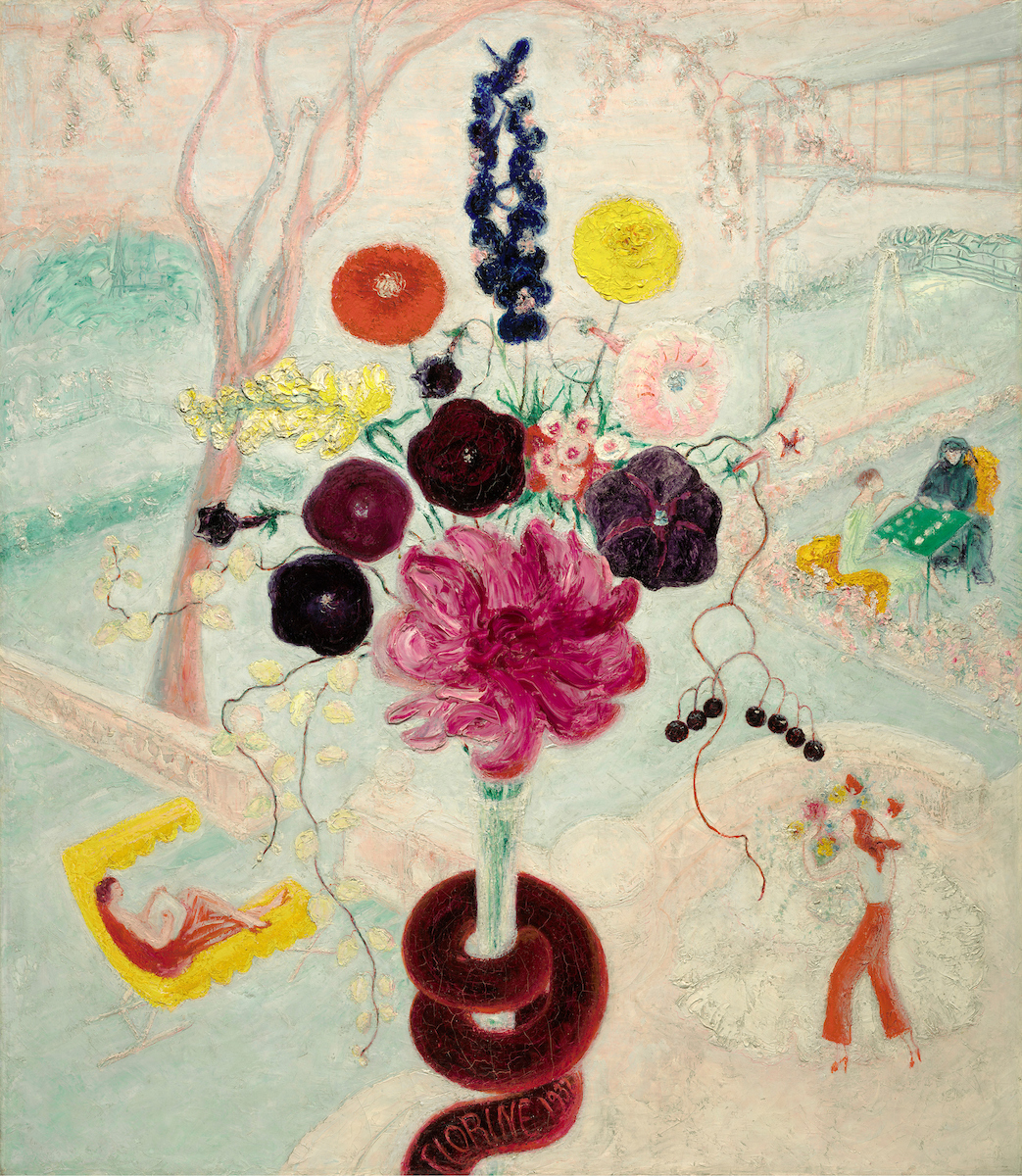 Stettheimer created Family Portrait II. This iconic painting gathers many of the themes that preoccupied her throughout her career-her family, New York, and the theater. It also features some of her most distinctive artistic techniques: the use of strong colors, the mixture of a realistic setting with dramatic, even surrealistic elements; and an ornamental frame that calls attention to the artwork as an object. 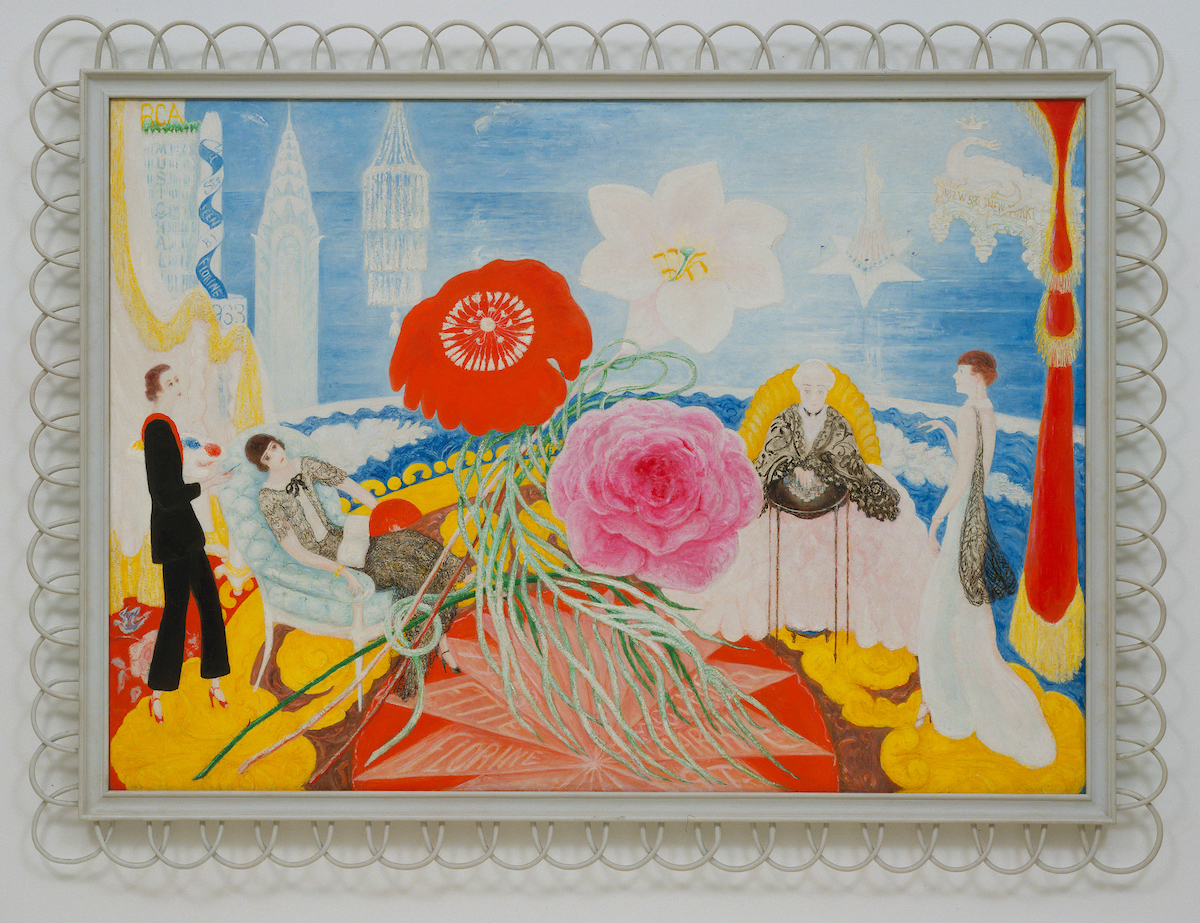 In addition to her work as a painter, Stettheimer was active as a costume and set designer, as well as a poet. In these endeavors, she invested words, materials, colors, and scenes with mystery and symbolic value.

During the summer of 1912, while Stettheimer was living in Paris, she attended a performance of Claude Debussy’s ballet, The Afternoon of a Faun, a production by the Ballets Russes. Stettheimer, then 40 years old, was inspired to produce a ballet of her own. From the fall of 1912, through 1916, she conceived libretti and drew, painted, and fabricated designs for the costuming of her original production, Orpheus of the Four Arts. The exhibition includes many of Stettheimer’s sketches, maquettes, and sculptures of the designs from the unrealized ballet. 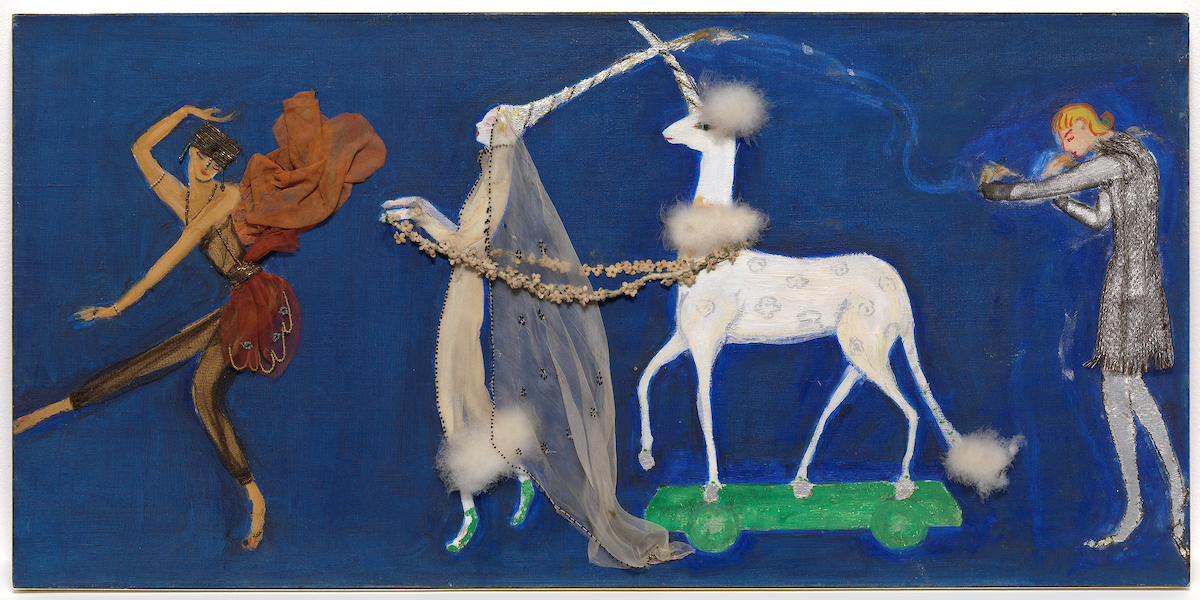 Stettheimer’s poems were known only to a few friends during her life. Curious, funny, celebratory, always acute, the poetry comments on a range of topics-likes and dislikes, nature, food, people, moods-casting unexpected light on the artist and her milieu. Seven of her poems are featured on the gallery walls. 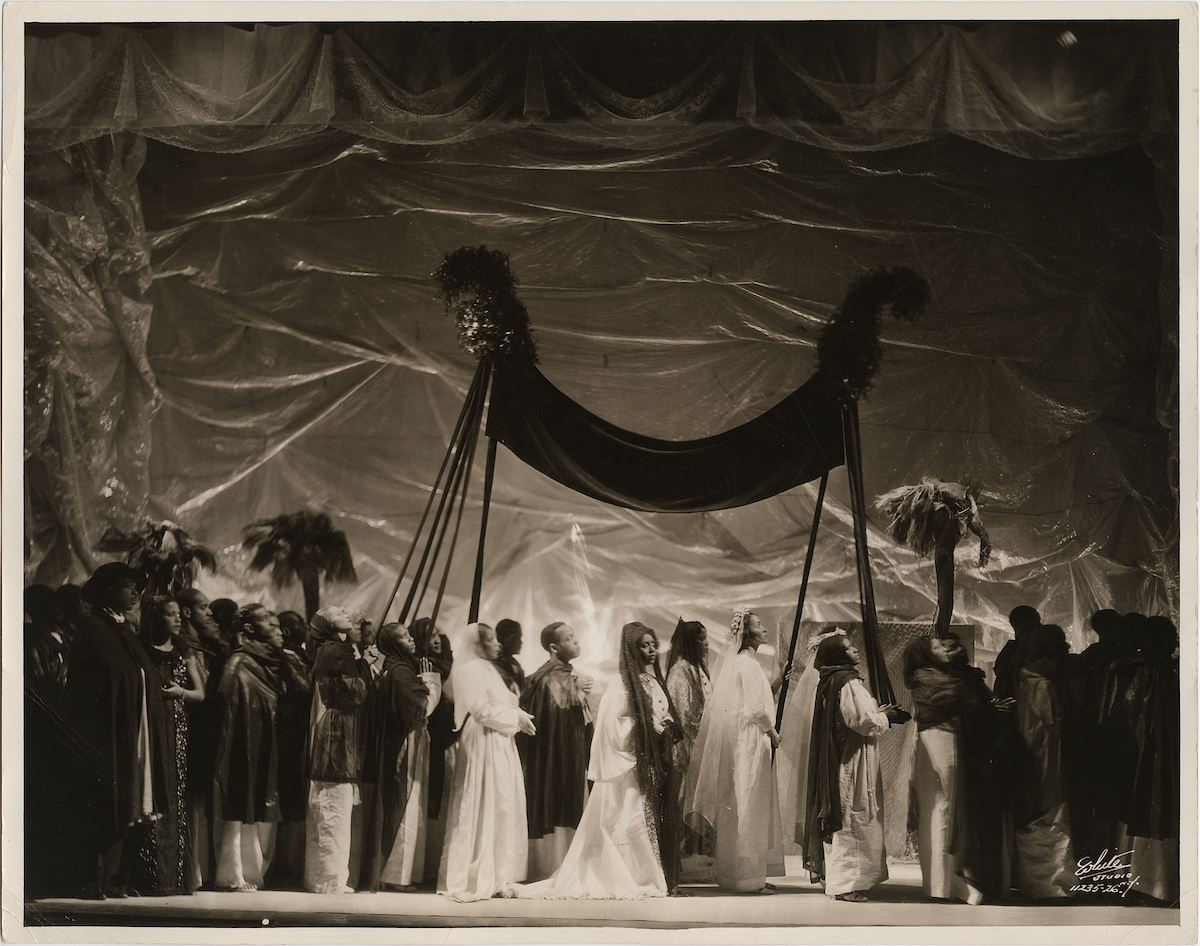 Also on view are more than a dozen costume and set designs by Stettheimer for the ground-breaking opera by Virgil Thomson (music) and Gertrude Stein (libretto), Four Saints in Three Acts (1934), which featured an all African American cast. Rather than drawing sketches, Stettheimer conceived of the designs for the opera in three dimensions, using handmade figurines and miniature stages.
High and mass cultures were joined in many ways; the production was staged on Broadway, rather than in an opera house, and Stettheimer utilized many unusual materials for her designs-cellophane, vaudevillian feathers and sequins, and coral. Photos of the original cast by Carl Van Vechten, as well as rare footage shot by prominent vanguard art dealer Julien Levy of the opera’s 1934 dress rehearsal, are included in the exhibition. 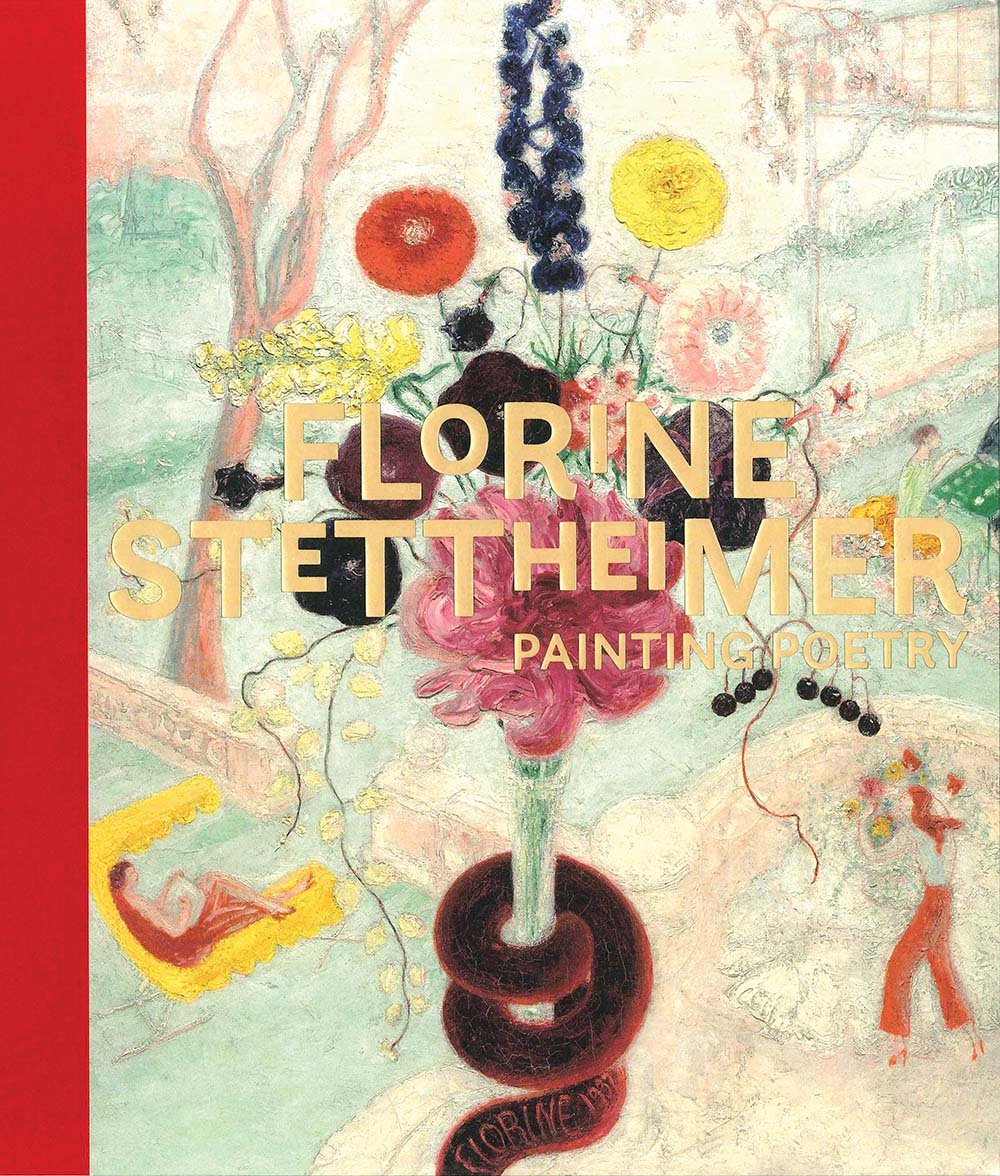 It includes many of the artist’s extant paintings, as well as drawings, theater designs, and ephemera.
It also highlights Stettheimer’s poetry and gives her a long overdue critical reassessment. The essays-as well as a roundtable discussion by seven leading contemporary female artists-overturn the traditional perception of Stettheimer as an artist of novelties.
Her work is linked not only to American modernism and the New York bohemian scene before World War II but also to a range of art practices active today.

Available worldwide and at the Jewish Museum’s Cooper Shop for $45.00

Florine Stettheimer: Painting Poetry is made possible through support from the Terra Foundation for American Art, the Weissman Family, the National Endowment for the Arts, and the Estate of Stella Gordon Meierfeld.  Additional support is provided by The Skirball Fund for American Jewish Life Exhibitions, the Neubauer Family Foundation, the Joan Rosenbaum Exhibition Fund, and Ealan and Melinda Wingate. 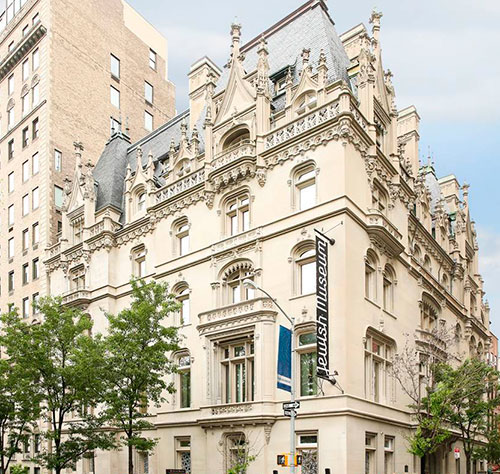