PICABIA
Our Heads Are Round so Our Thoughts Can Change Direction
MoMA. Museum of Modern Art

This exhibition presents approximately 200 works in an array of mediums
in order to advance understanding of Picabia’s unruly genius and its vital place
within the history of modern art. 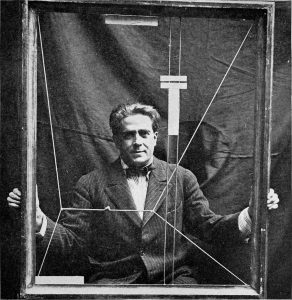 Picabia first made his name as an after-the-fact Impressionist painter, and the exhibition begins with works such as Effect of Sunlight on the Banks of the Loing, Moret (1905) and Untitled (Notre-Dame, Paris) (1906), which call to mind those by older artists such as Claude Monet and Alfred Sisley.
But Picabia is believed to have worked from photographic postcards rather than immersing himself in nature and painting outdoors—subverting the original spirit of Impressionism and that style’s open-air techniques.
This penchant for dispensing with established norms and appropriating readymade images would become a constant in his career, and these strategies would continue to elicit shock from critics and audiences alike. He quickly left Impressionism behind, cycling through a rapid succession of styles—another through-line in Picabia’s practice that is explored in this exhibition.

In the summer of 1912, Picabia turned to abstraction, exemplified by The Spring and Dances at the Spring [II]. Their inclusion at the Salon d’Automne that year, alongside abstract canvases by František Kupka and Fernand Léger, marked the arrival of non-objective painting in Paris.
Critics reviled Picabia’s new work as “incomprehensible” although, several months later, the Armory Show opened in New York with four of Picabia’s abstractions on view, including Dances at the Spring [I], and there he was received as a “high priest” of modern art.

When he returned to Paris in the summer of 1913, Picabia began work on a pair of monumental canvases that would become Udnie (Young American Girl; Dance) and Edtaonisl (Ecclesiastic), which are displayed together for the first time in the US. Critics almost universally mocked these works when they were unveiled at the 1913 Salon d’Automne in Paris, but they were subsequently heralded as early precedents for postwar abstract painting. 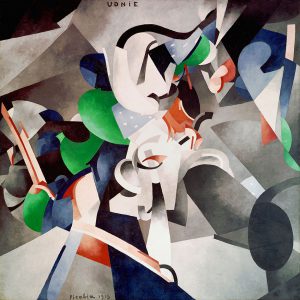 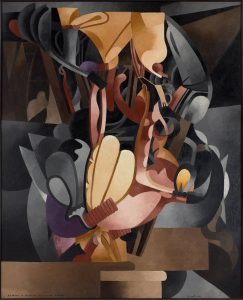 The exhibition turns to Picabia’s work during World War I, as he sought exile in New York, Barcelona, and Switzerland. He painted, drew, and became active as a writer, but the mainstay of his activity was contributing to and editing journals.

His engagement with the mechanics of journal production coincided with the appearance of the machine in paintings such as Very Rare Picture on the Earth (1915). In these works, the machine was both subject and model for a newly hard-edged, precise, and impersonal approach. 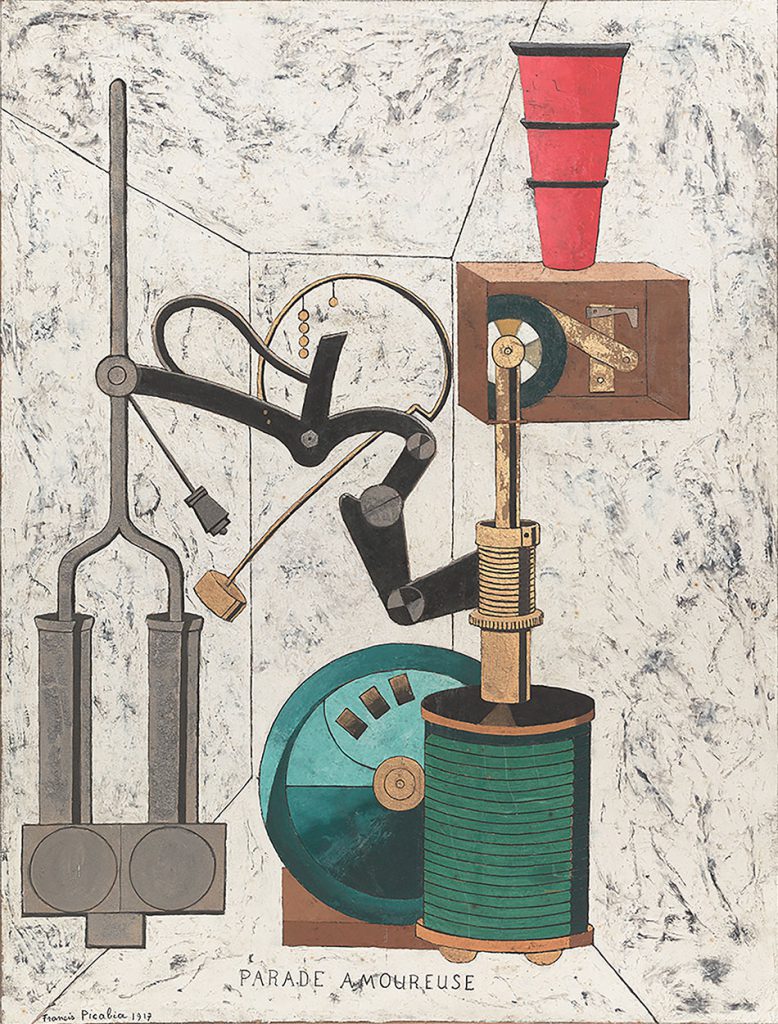 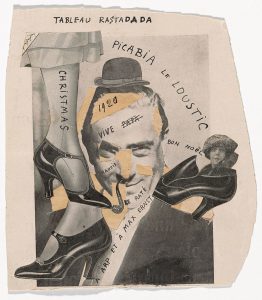 After the war, Picabia returned to Paris, where he joined Tristan Tzara and other Dadaists in an all-out assault on the culture of rationality that they held responsible for the war.
Noteworthy works on view from this period include The Cacodylic Eye (1921), an iconoclastic group portrait of the Paris Dada movement bearing the signatures of over 50 friends and acquaintances, and St. Vitus’s Dance (Rat Tobacco) (1919–20, modified 1946–49), an empty frame strung with yarn between which words were suspended.
Both works relinquished artistic agency in favor of automatic procedures and renounced individual authority, functioning as both irreverent in-jokes and as attacks on the grand European tradition of painting. 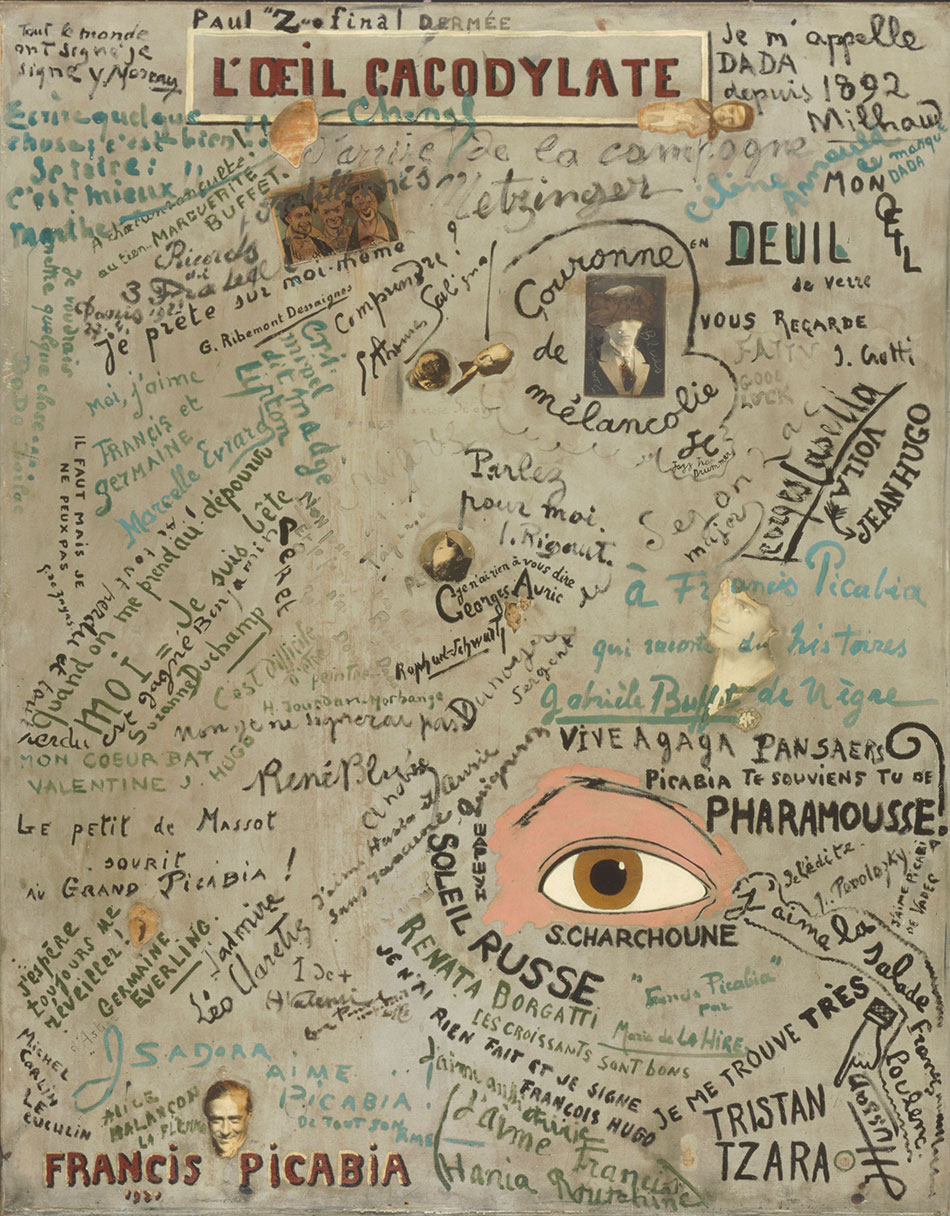 On November 18, 1922, the Exposition Francis Picabia opened at the Galeries Dalmau in Barcelona, featuring almost 50 new works on paper. A section of the exhibition pays homage to Picabia’s original display, based on archival photographs. The works encompassed a dizzying array of styles: portraits of doe-eyed Spanish women hung alongside optical abstractions and geometric drawings inspired by mechanical diagrams published in a popular science magazine.

Picabia continued to submit paintings to the Paris salons. Instead of traditional oils, he used commercial enamel paints (commonly referred to by the brand name Ripolin) and worked on an imposing scale intended to attract attention, creating works in both abstract and figurative modes. The bold graphic character and sinister eroticism of The Spanish Night (1922) and Animal Trainer (1923) are also seen in the contemporaneous, black-and-white covers Picabia designed for the journal Littérature. 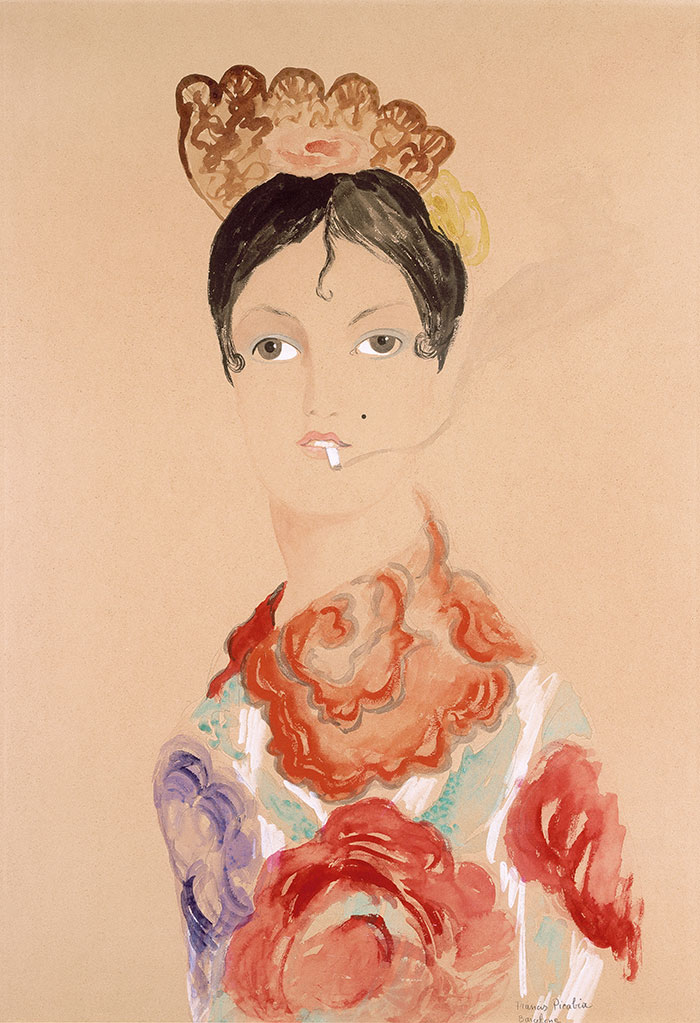 The composer Erik Satie approached Picabia about collaborating on a ballet in January 1924, and Picabia had the idea of also producing a film, which he imagined as “a parody of cinematic action.” Cinema and dance interacted spectacularly when the humorously titled ballet Relâche (“day off” or “no performance”) and the film Entr’acte (“intermission”) premiered on December 4, 1924. Entr’acte is screened in the exhibition alongside publicity photographs of Picabia’s sets and costumes and various related drawings by Picabia, including portraits of people involved in the ballet’s production.

In January 1925, Picabia left Paris for the south of France, near Cannes, where he pursued his longtime passions for yachting, fast cars, and casino gambling. The move also precipitated an intensely productive period of painting, as seen in his so-called Monsters: pictures of embracing couples and carnival characters, rendered in the acidic colors and saturated sheen of commercial enamel paint. These works simultaneously indulged and mocked the fashionable high society in which Picabia found himself.

His use of enamel paints intensified in the mid-1920s, as did his experimentation with other unorthodox materials and processes. Collages from this period incorporate things like matches, hairpins, dry pasta, and even the literal materials of art-making: paint-can lids, brushes, and stretcher wedges. Picabia also revisited older paintings with increasing frequency. Commercial enamels proved well suited to amending, adjusting, and covering over prior works, as seen in The Lovers (After the Rain) (1925), which Picabia painted over an earlier abstraction. Over-painting became a recurrent tactic within Picabia’s practice, as would masking and superimposition. 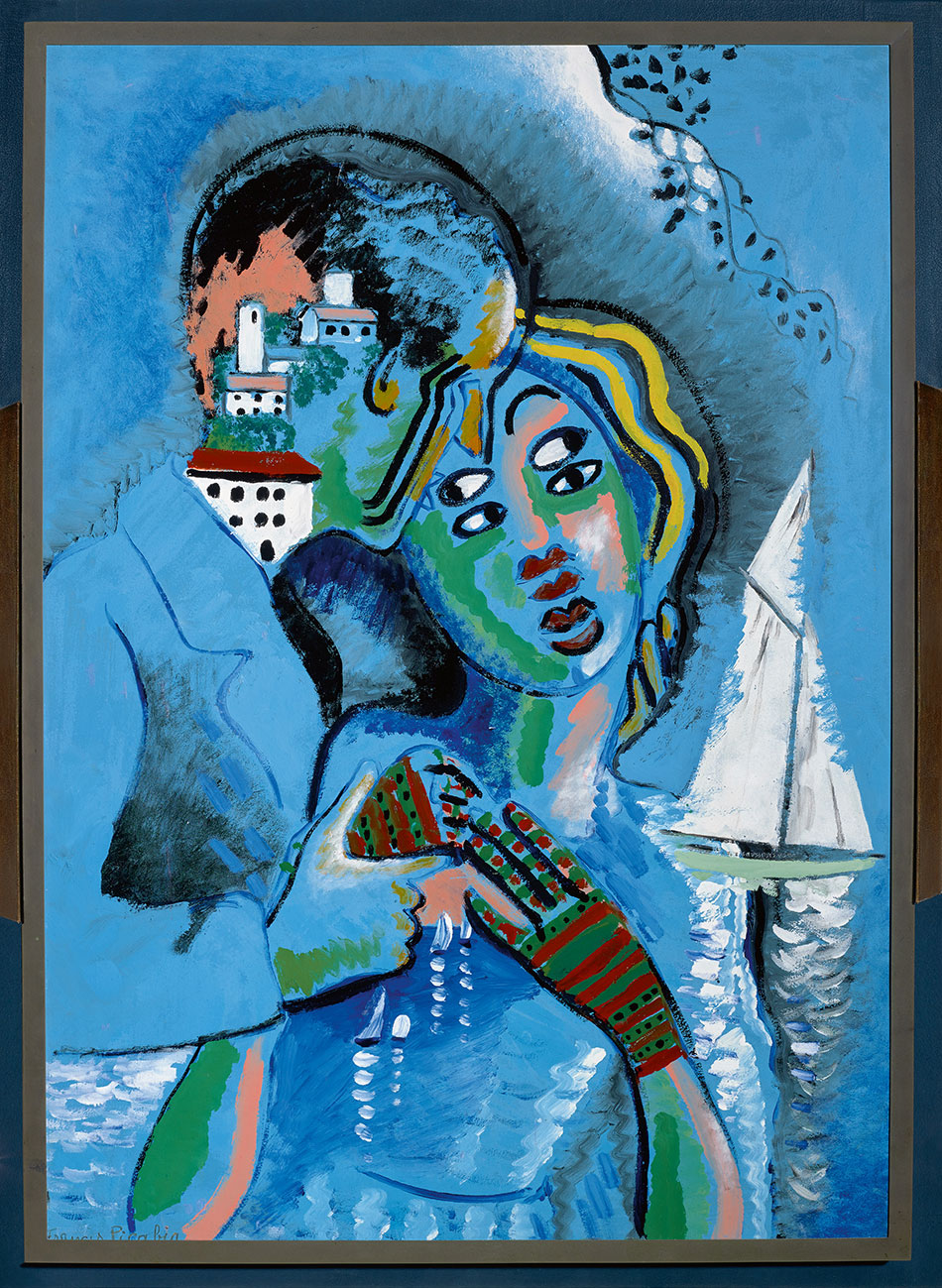 In 1927, Picabia began creating the “superimposed” works known as his Transparencies by alternating layers of paint with layers of resinous varnish, which allowed him to lay linear motifs atop one another while keeping them distinct. These richly layered, multi-referential compositions interweave an often dizzying array of contour images drawn from such diverse sources as Renaissance painting, Catalan frescoes, and contemporary popular culture. As seen in the exhibition, Picabia’s Transparencies range from the complex imagery of paintings like Sphinx (1929) to the masterful refinement of Aello (1930), Mélibée (1930), and Salomé (1930) 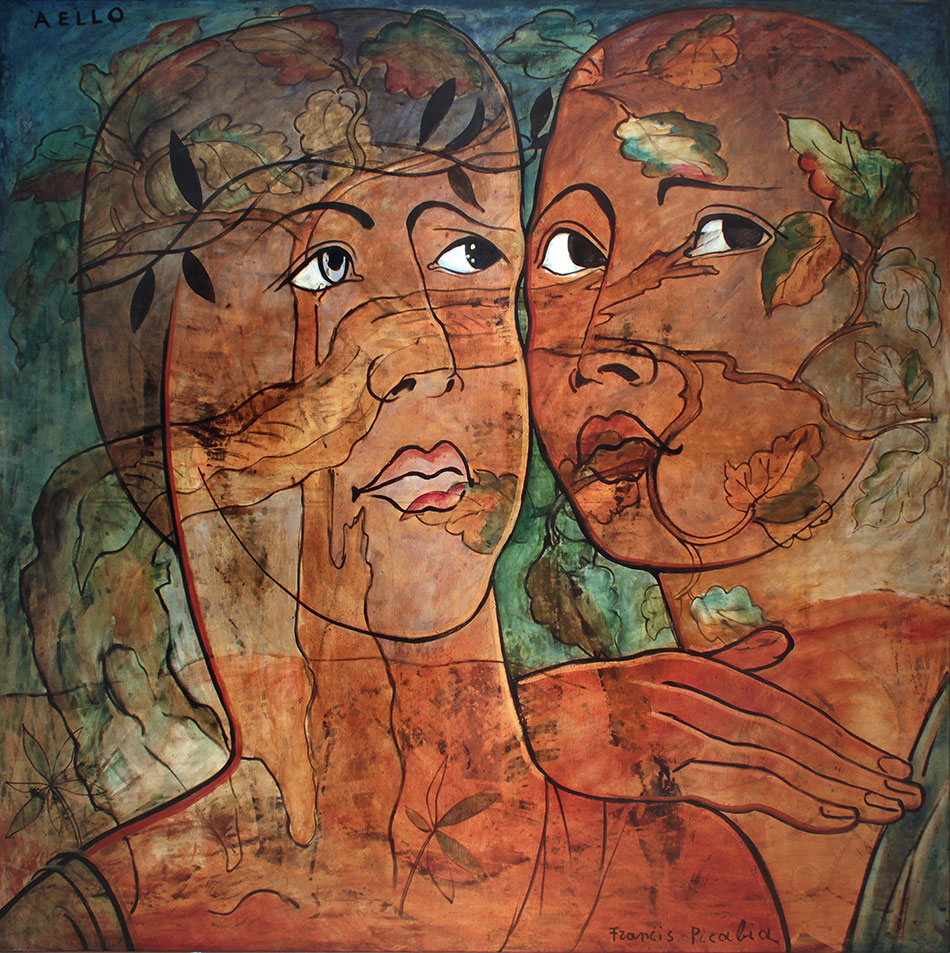 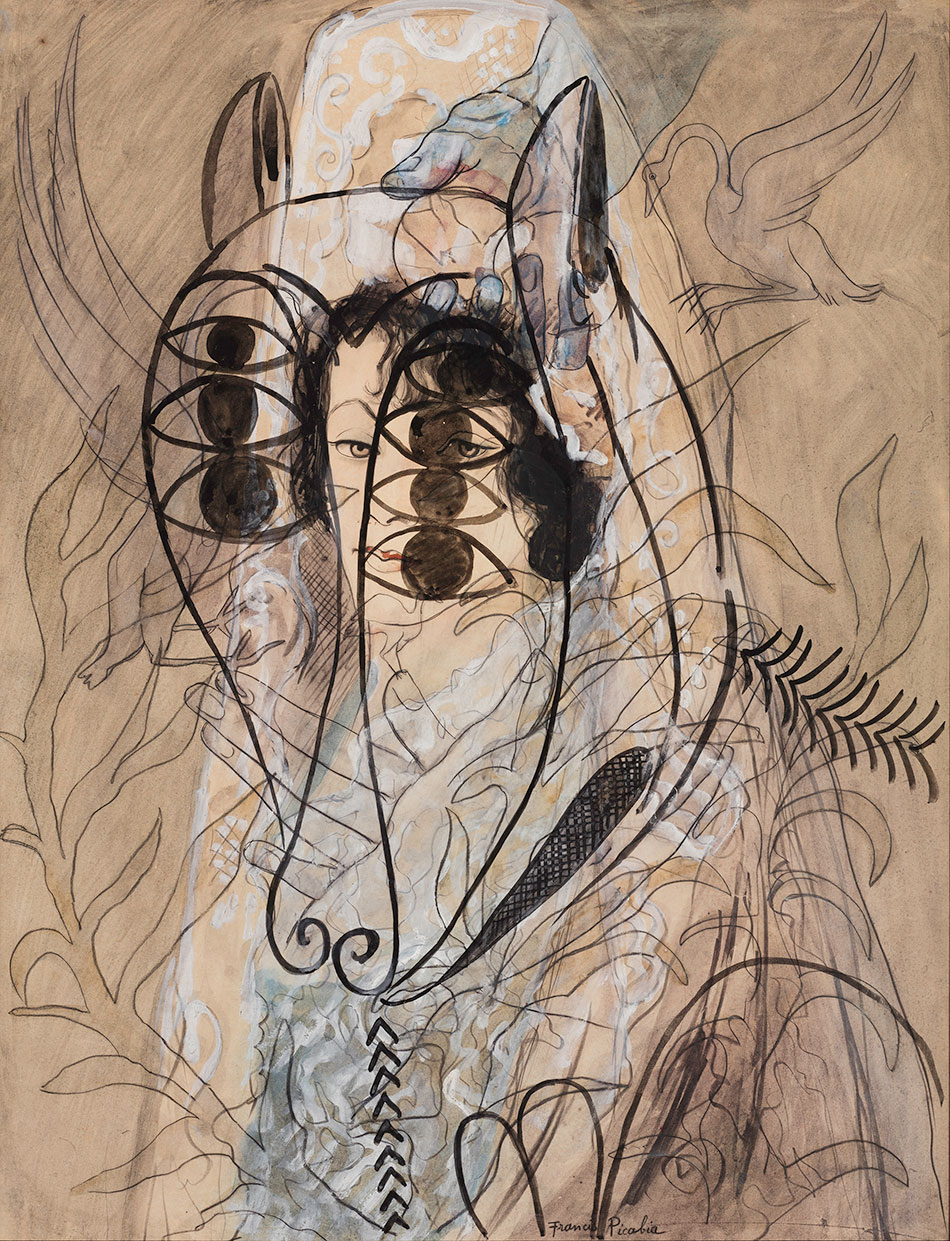 The mid- and late 1930s was a period of intense material experimentation and reworking for Picabia, as he shuttled back and forth between Paris and the French Riviera. Works like Fratellini Clown (1937–38) and The Spanish Revolution (1937) exemplify the troubling malaise and sense of creeping doom that was spreading throughout Europe, as the threat of fascism and totalitarian ideologies took center stage. Despite the political unrest and looming threat of war, Picabia continued to organize lavish galas at the municipal casino for Cannes high society; he also created facial superimpositions and photo-based portraits, including one of his friend, the author and art collector Gertrude Stein. 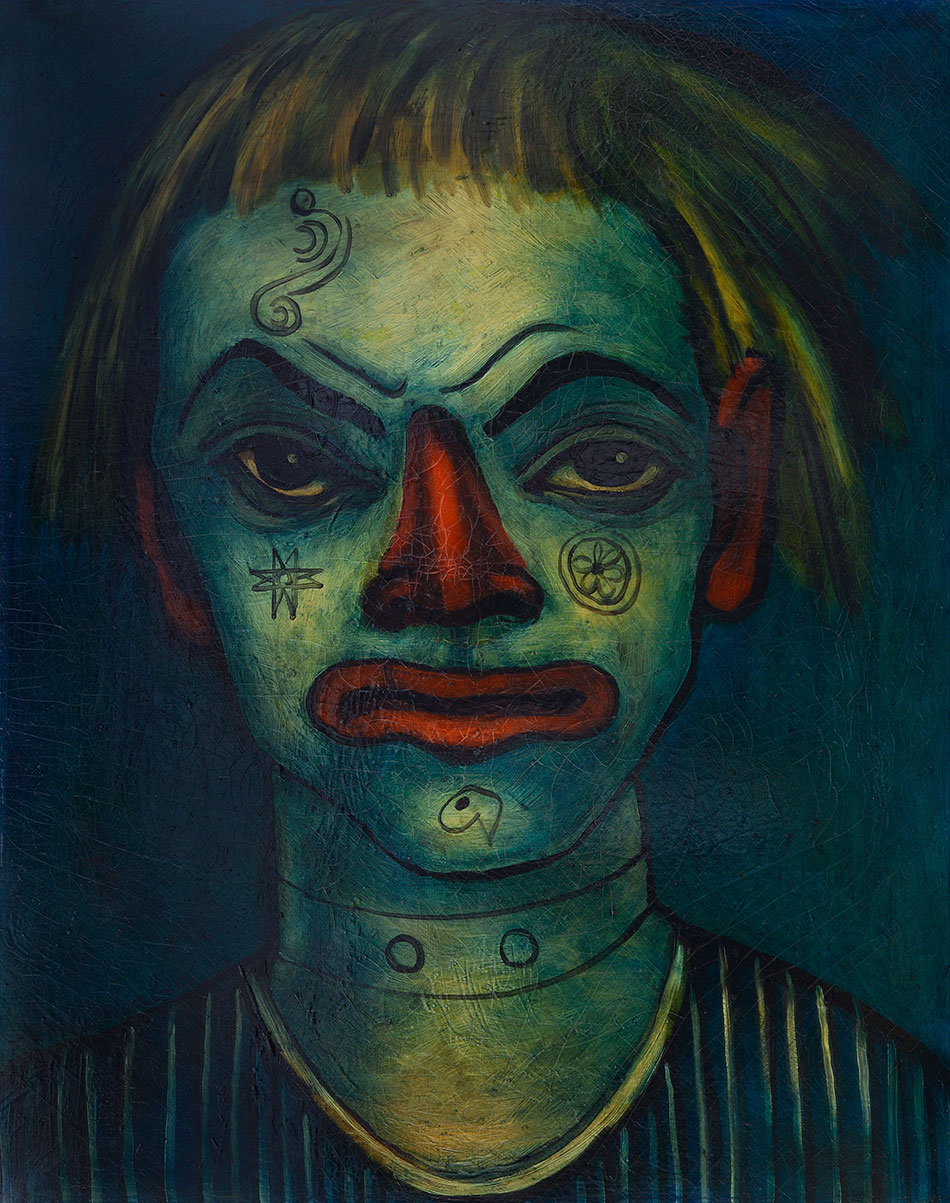 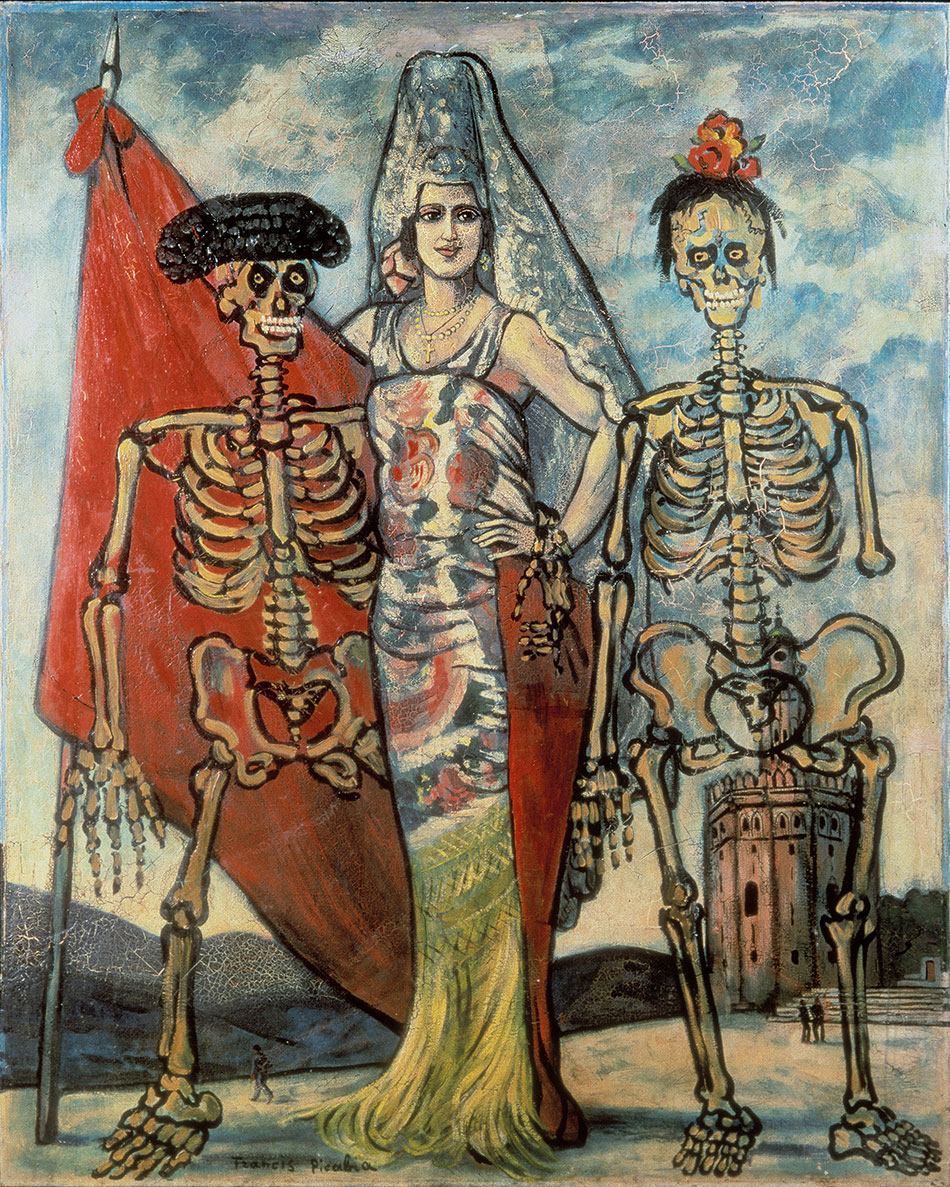 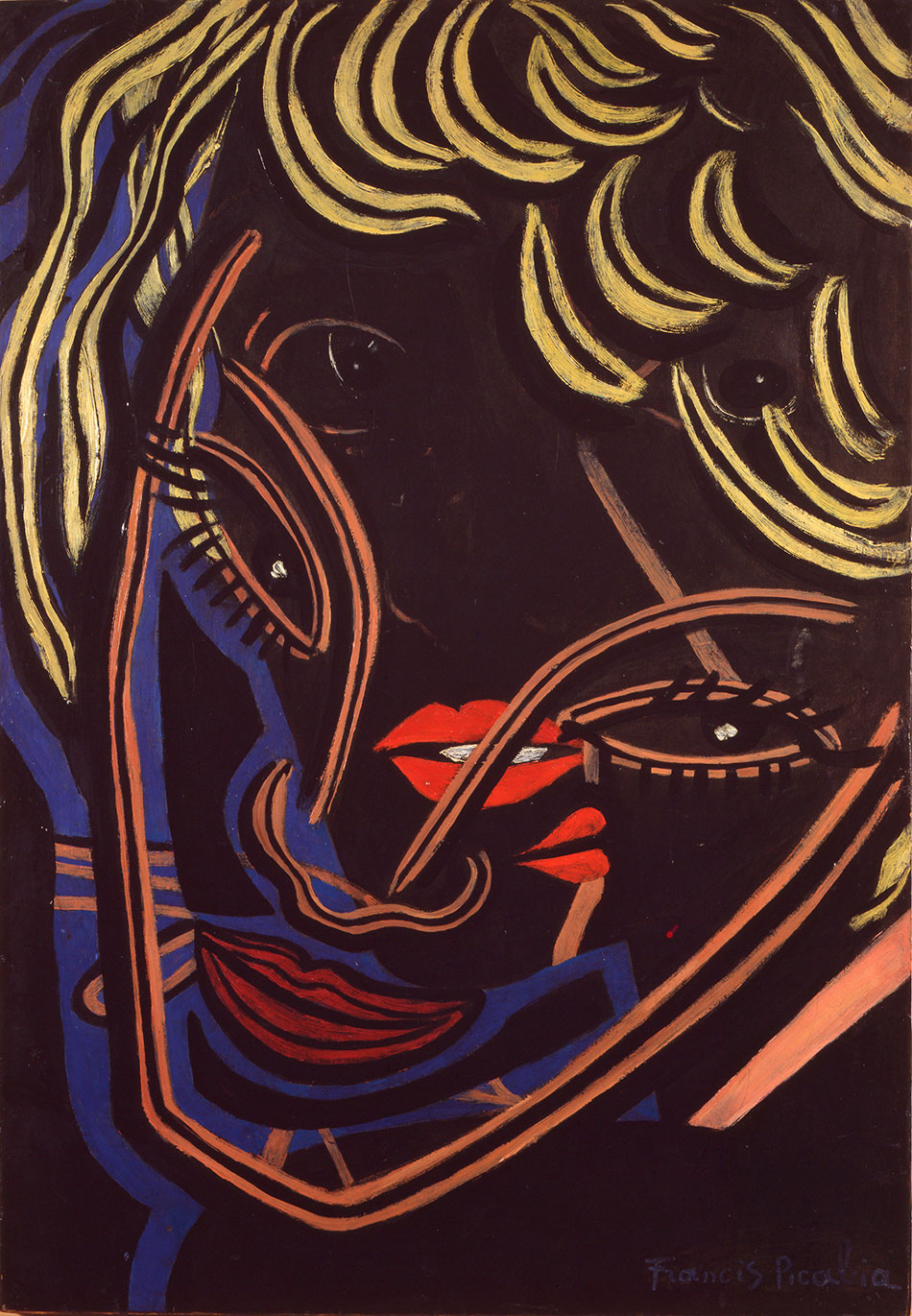 Picabia remained in the south of France throughout World War II, where he painted works that combine kitsch subjects, popular culture, and politics in an unsettling mix. Many of Picabia’s wartime paintings recombine images lifted from photographs published in late-1930s soft-core pornography magazines, often preserving those photographs’ artificial studio lighting, soft focus, and optical distortions created by the camera lens. His much-debated wartime paintings remain open to interpretation, bearing witness to the moral ambiguities of this dark historical moment, and to the intricacies of an individual’s response to seismic political change. 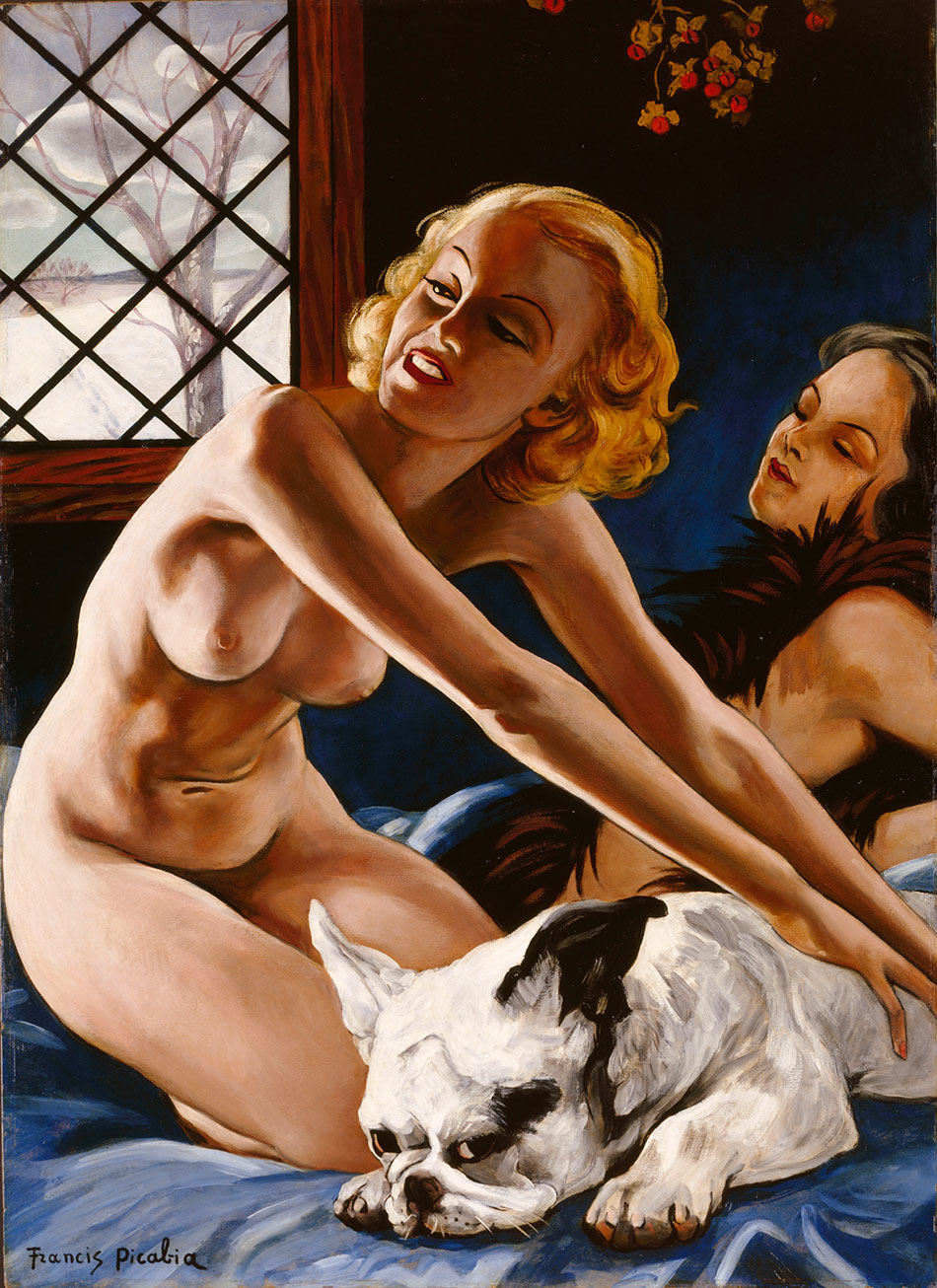 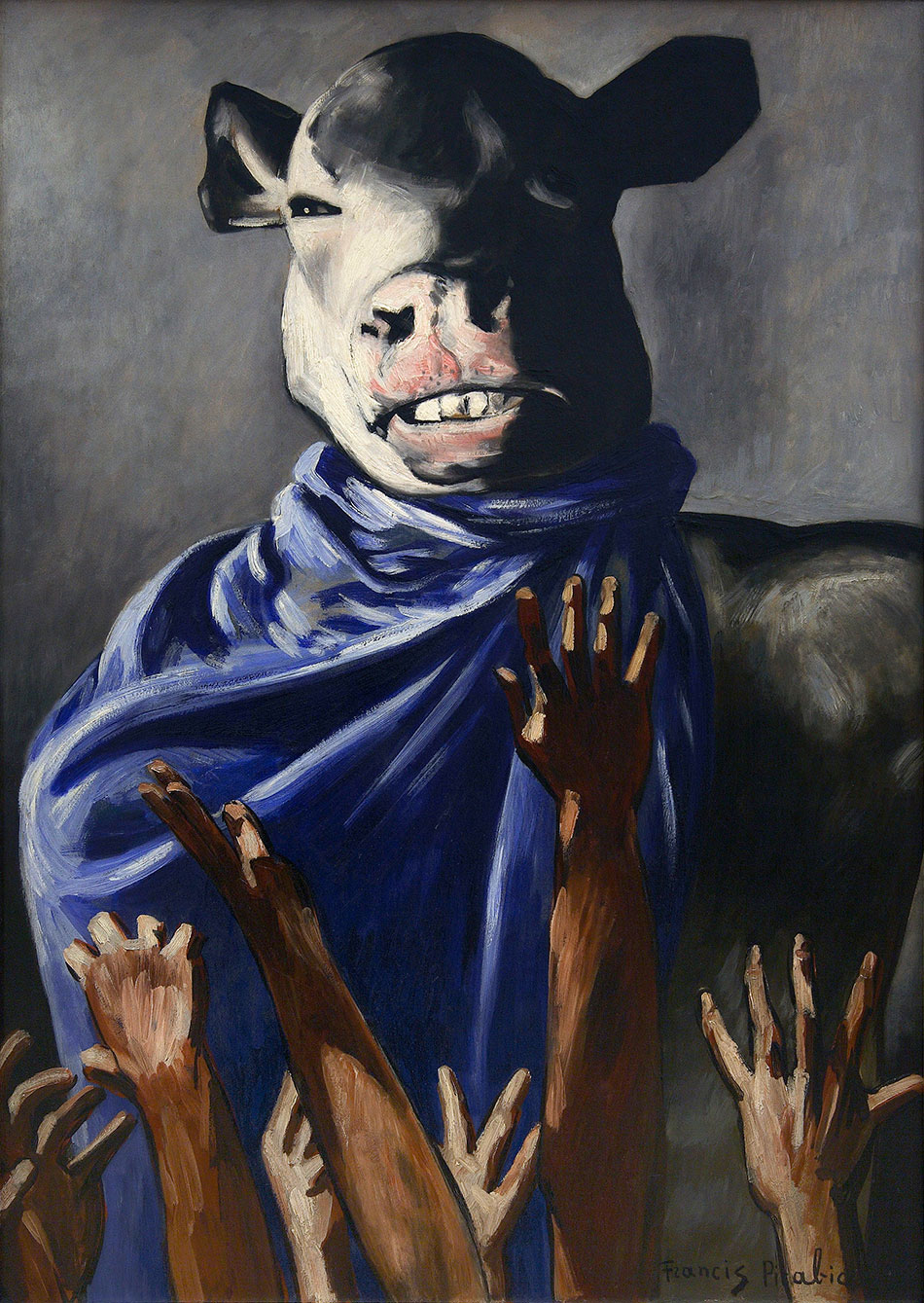 “Figurative art is dead,” Picabia said in an interview in November 1945, announcing his return to abstraction. The exhibition concludes with Picabia’s post‐WWII abstractions, including a group of encrusted, thickly repainted monochromatic “point” or “dot” paintings, some of which have titles derived from Friedrich Nietzsche. Picabia’s final paintings, The Earth Is Round (1951) and La Terre est ronde / K.O. (c. 1951) are on view, along with a number of illustrated books he produced in his last years. After suffering a stroke in June 1951, Picabia died on November 30, 1953, in the same house in Paris where he had been born. 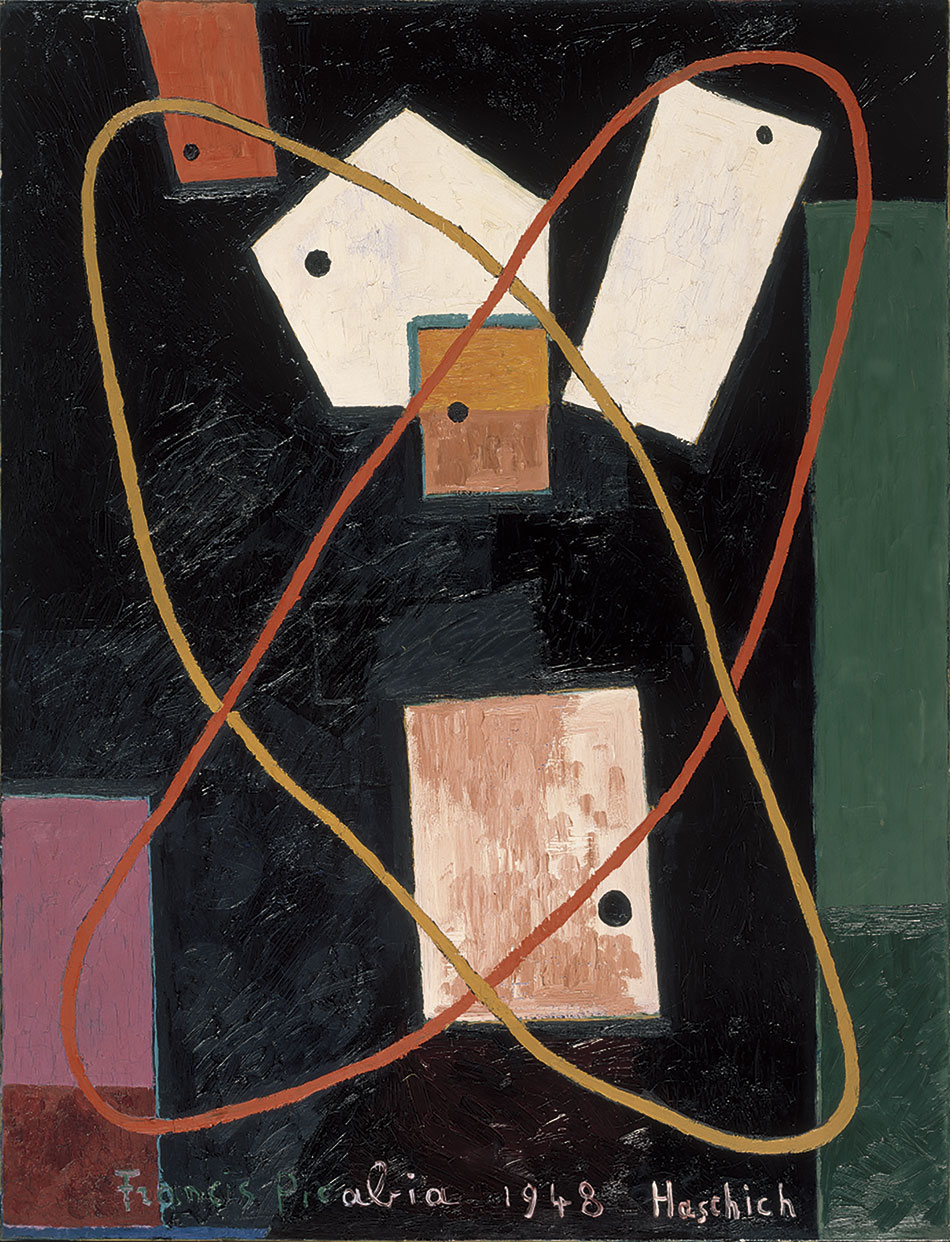 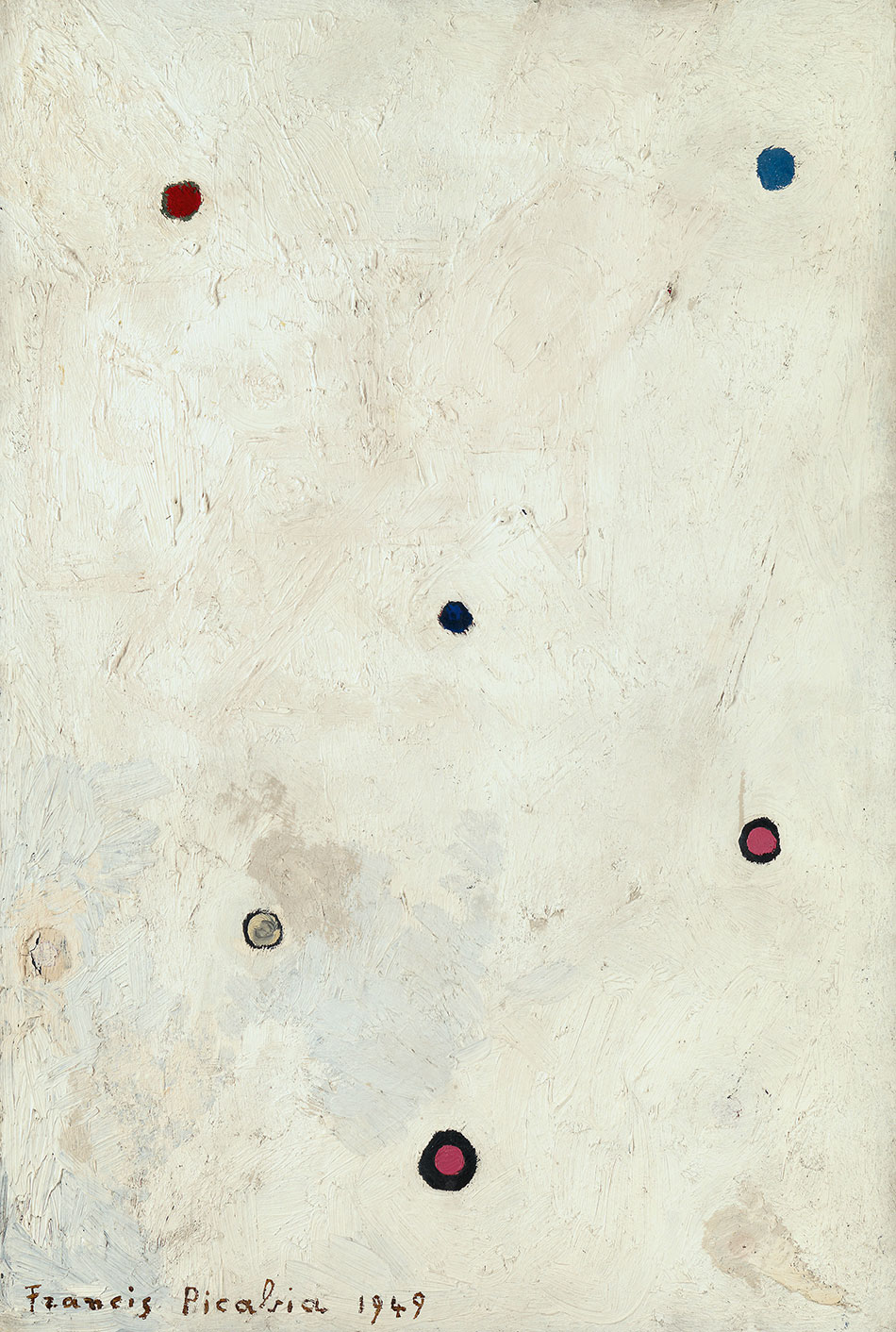 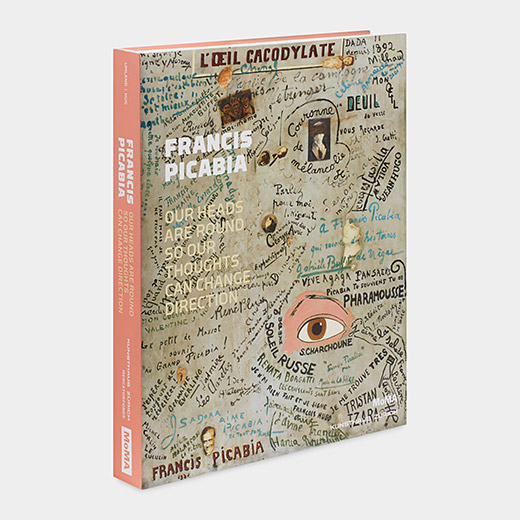 Featuring, this publication examines the full range of Picabia’s oeuvre and a variety of topics, including the corporeal character of his abstractions, his unexpected turn to mechanical painting, his experiments with materials and source imagery, the problems of his politics, and his contemporary legacy.

Published by The Museum of Modern Art, New York, and the Kunsthaus Zürich. Available at MoMA stores and online at store.moma.org. Link to MoMA store

Major support for the New York presentation is provided by The International Council of The Museum of Modern Art. Generous funding is provided by Lawrence B. Benenson. This exhibition is supported by an indemnity from the Federal Council on the Arts and the Humanities. Paint provided by Farrow & Ball. Additional support is provided by the Annual Exhibition Fund.