FROM THE LANDS OF ASIA
The Sam and Myrna Myers Collection 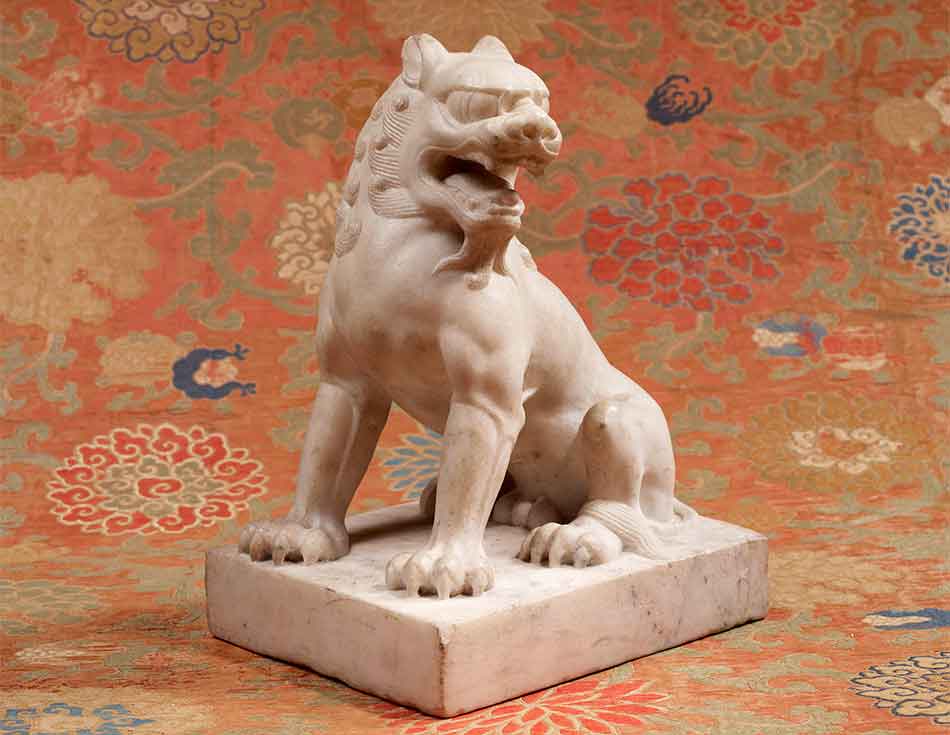 This exhibition present over 400 objects selected from this remarkable collection,
with works representing key periods in the history of the art of China, Japan, Tibet, Mongolia,
Korea and Vietnam. Fascinating historical events through themes such as the symbolism
of Chinese jade, the trade in blue-and-white porcelain, Buddhism, Noh theater,
the Japanese samurai, the tea ceremony and the scholar’s studio.

Jade has been appreciated by the Chinese for centuries as a precious stone, primarily because of its translucency, i.e. the capacity of allowing light to pass through it, which varies greatly according to the composition and the impurities in the jade. Polishing jade, the last step in making an object, is probably the most important phase in the carving process, since it enhances the inner beauty of the stone by highlighting its crystalline texture and making the stone shine. The Myers Collection of archaic jades is one of the richest and most complete private collections in the West, ranging from the Neolithic period (3000 bc) through the first dynasty, Han (206 bc – 220 ad), and ending with the Yuan (1279 – 1368). Photos by Thierry Ollivier 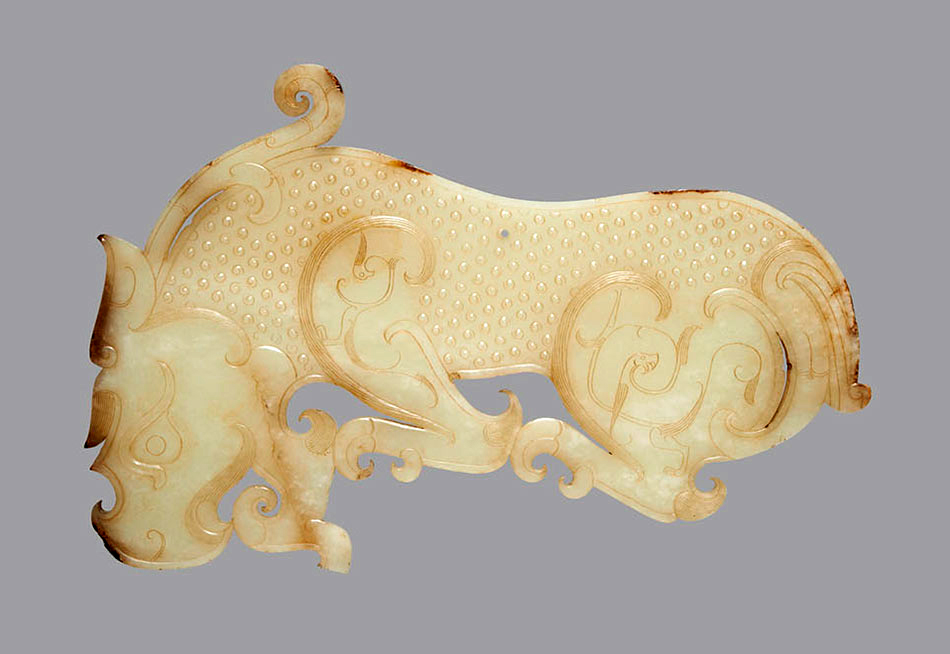 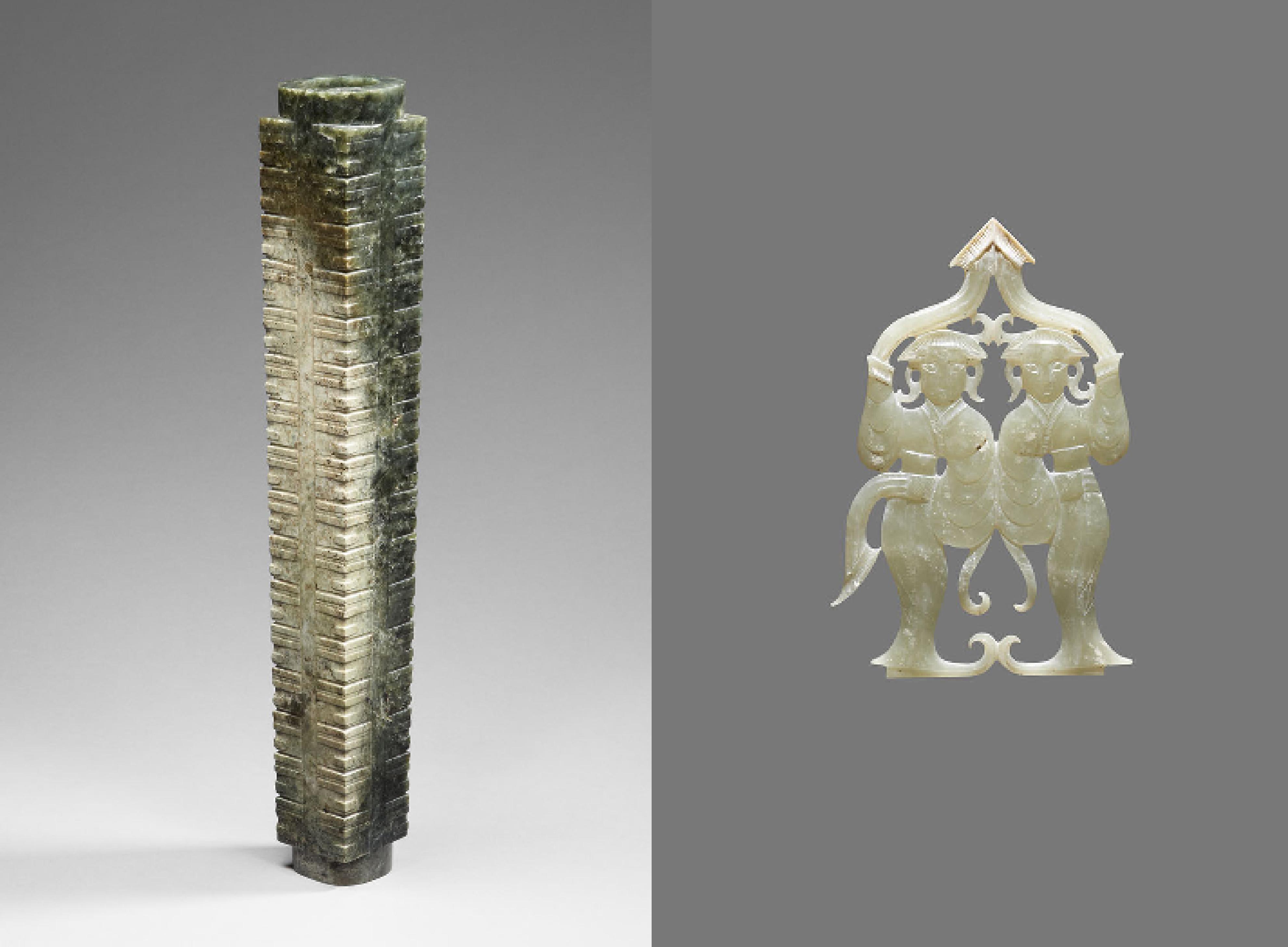 CHINA
Stele with the Buddha Shakyamuni 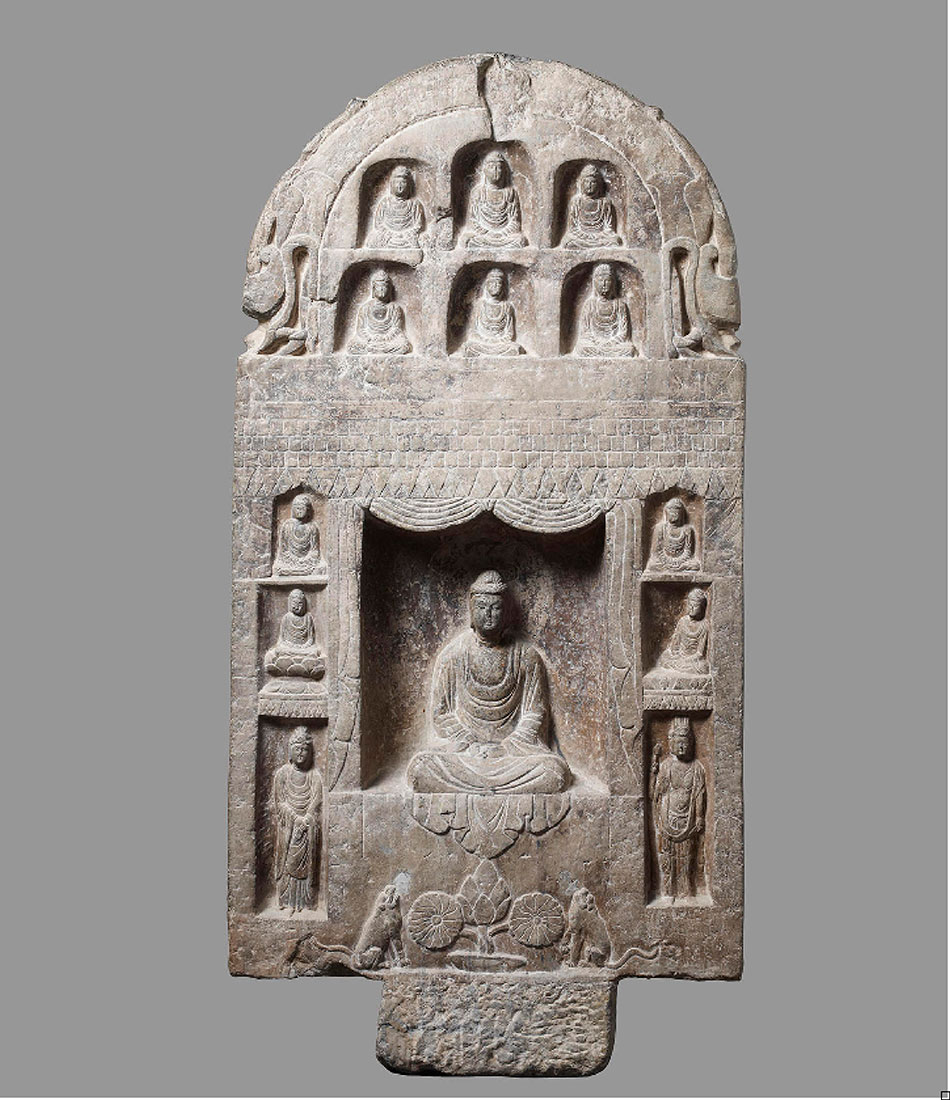 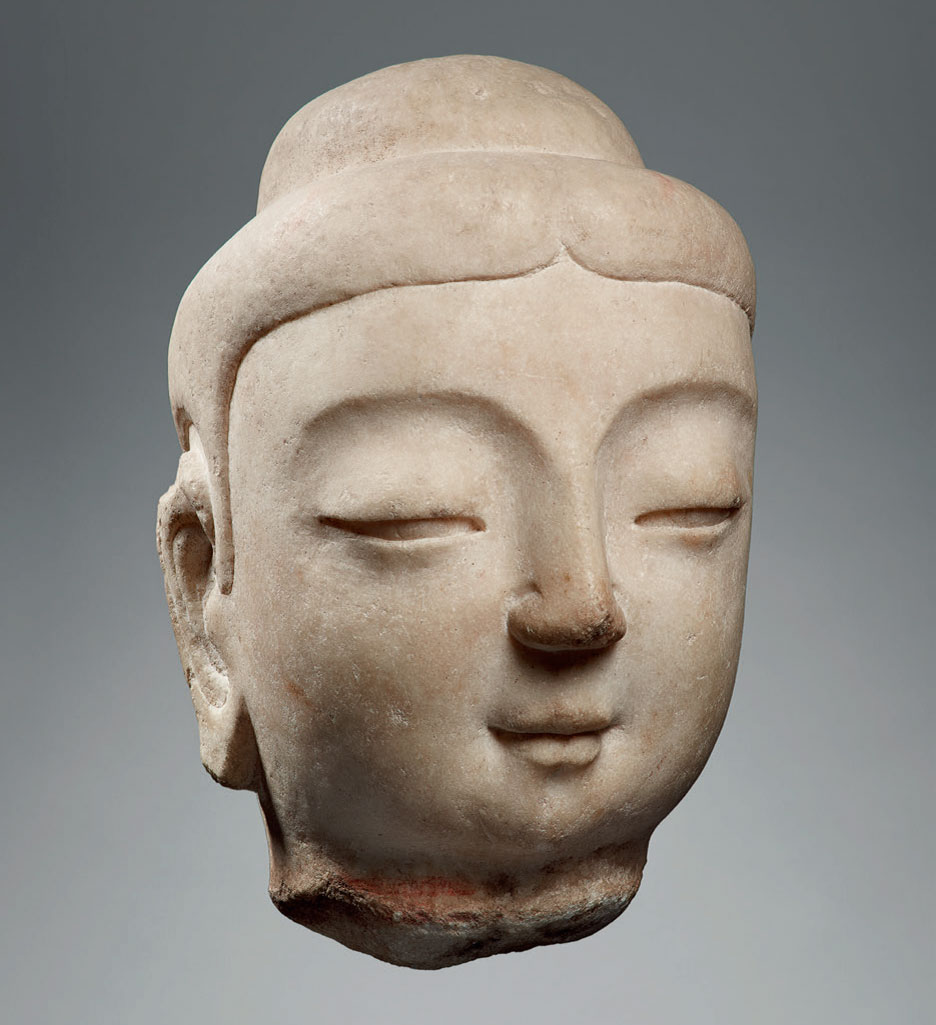 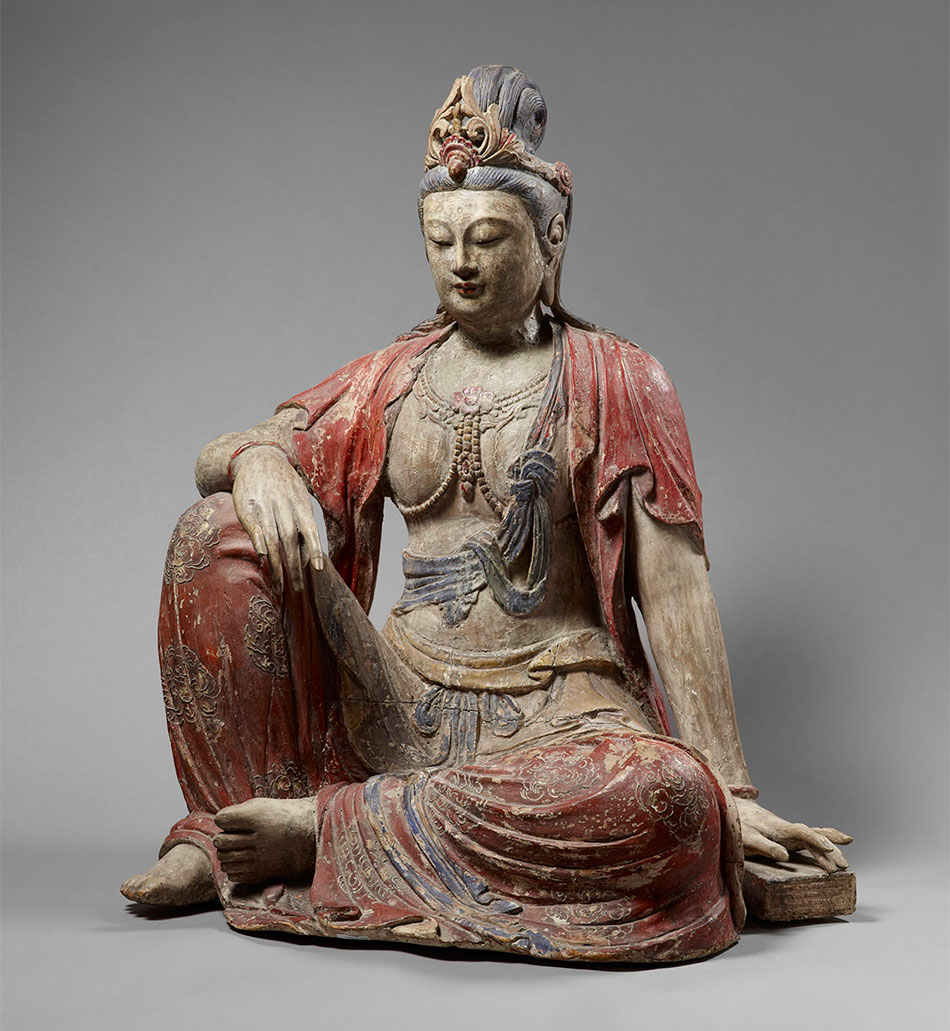 CHINA
An Ocean of Porcelain

By Jean-Paul Desroches, extracted from the Exhibition Catalogue

The Yuan dynasty changed the course of history by introducing the use of underglaze cobalt blue in porcelain
made in Jingdezhen in Jiangxi Province. With the use of cobalt oxide, Chinese ceramics passed from an art of clay to an art of the brush. Ceramic makers turned to porcelain, creating a porcelain industry and then international trade.
The Mongol court was infatuated with this new style which transformed ceramicists into painters, making what we call in the West “blue and white porcelain.” The discovery of porcelain found under the sea fascinated Sam and Myrna Myers, who followed these developments for more than thirty years. They were able to gather beautiful specimens found at the bottom of the oceans. 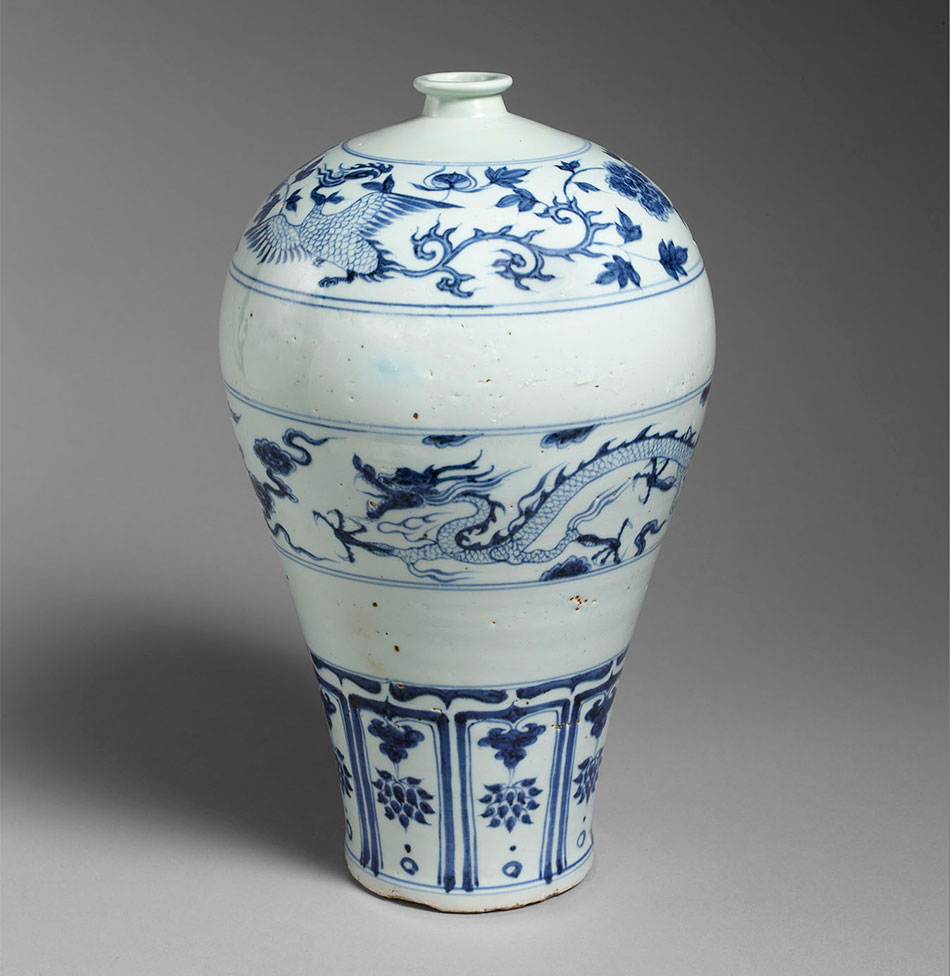 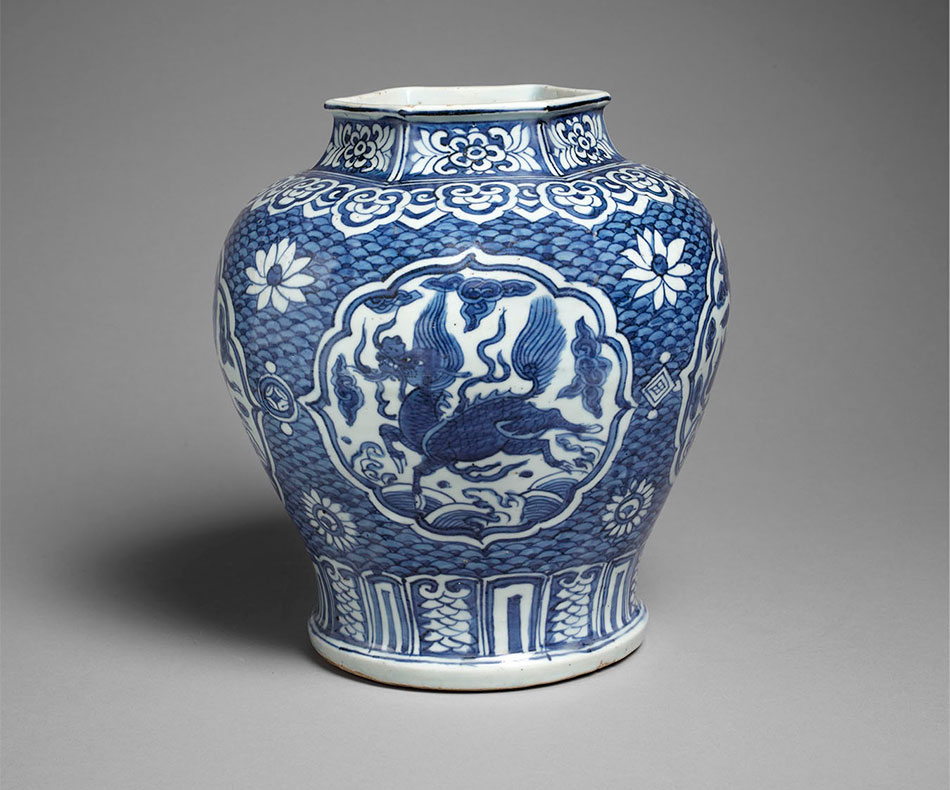 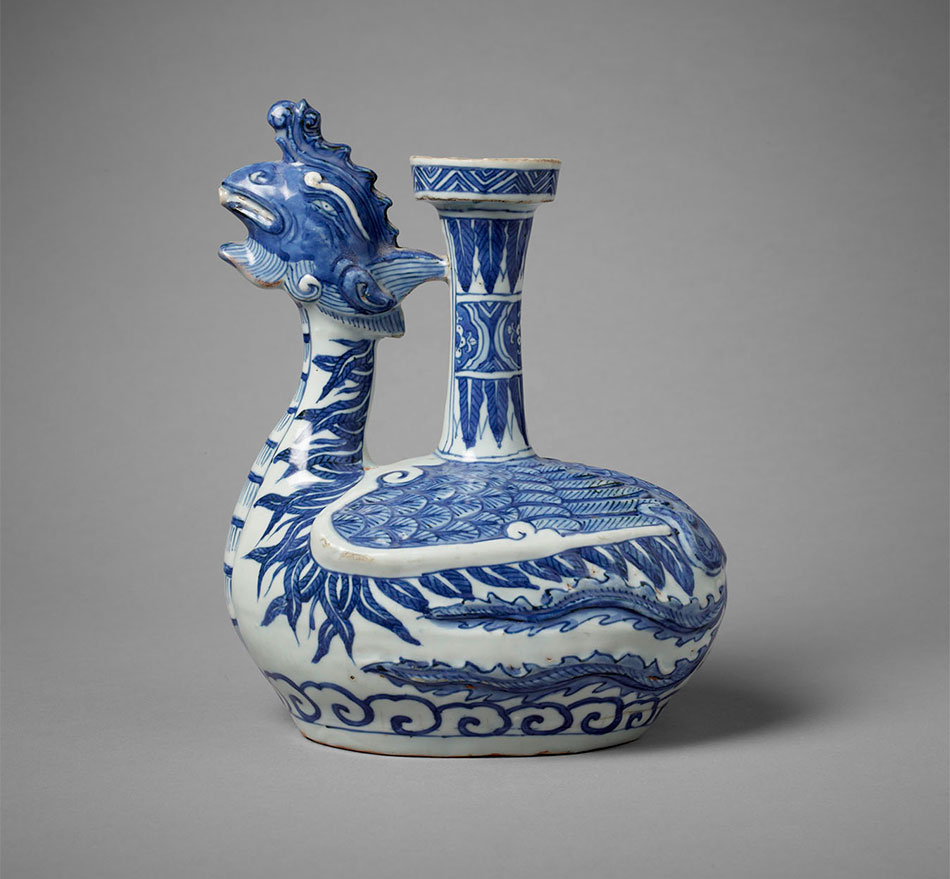 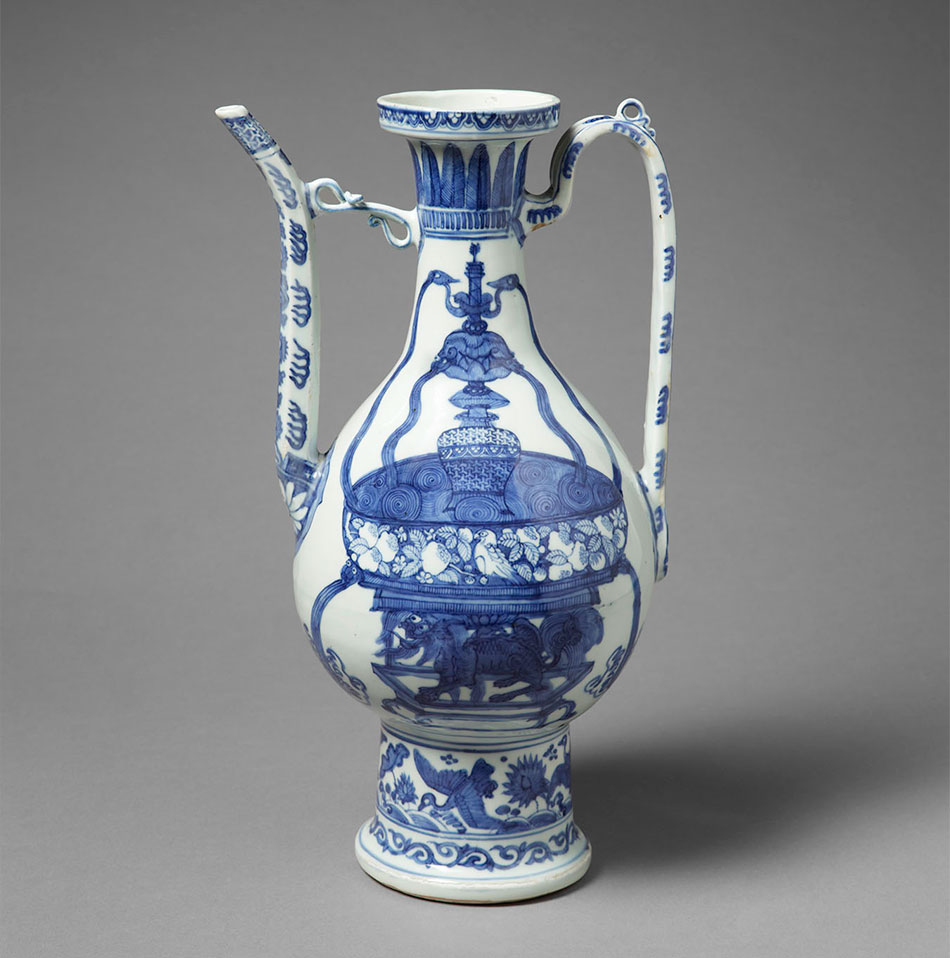 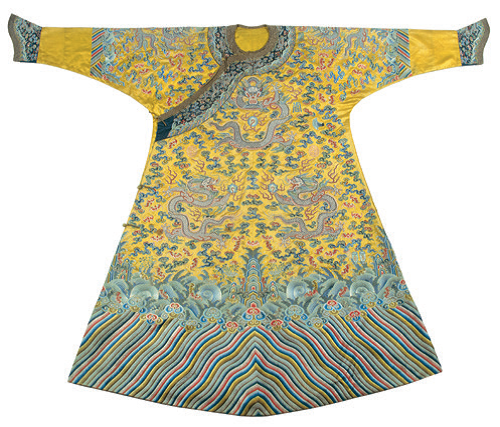 By John E. Vollmer,
extracted from the exhibition catalogue

In China, silk textiles were esteemed for their very existence and the aura of luxury they conveyed. They came to embody the cultural values of the highest strata of society: hierarchy, precedent and wealth, but particularly the cosmic intent of imperial rule.
In the 11th century bc, Zhou dynasty kings legitimized their overthrow of the Shang kingdom by claiming the moral obligation of the Mandate of Heaven (tianming), a theory that a ruler’s performance on behalf of the ruled, rather than his bloodline or political power, determined his fitness to rule.
At its core was the idea that the ruler was empowered to mediate between Heaven and man for the benefit of the state, which led to the sovereign being called the Son of Heaven (tianzi). Moral authority found expression through ritual, which was viewed as essential for maintaining social order and harmony with Heaven. Accordingly, ritual clothing, together with a rich variety of accessories and furnishing, were agents for  expressing this authority. Image: Imperial robe, embroidered silk with seed pearls, Qianlong period, 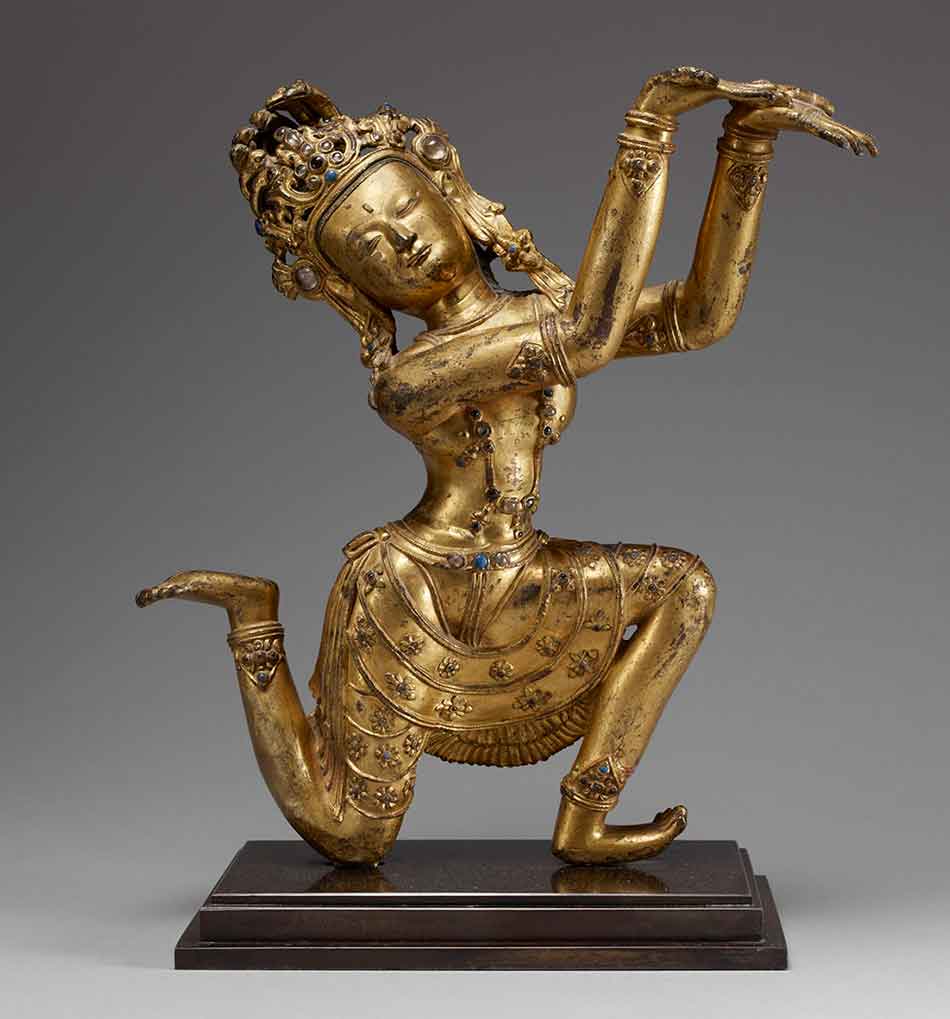 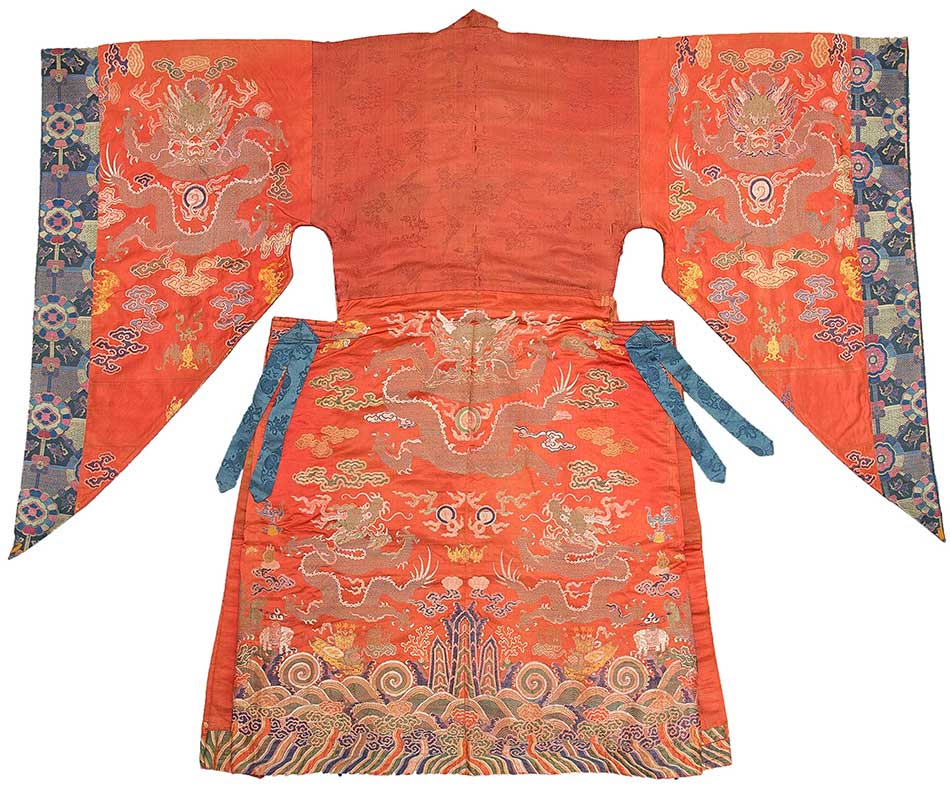 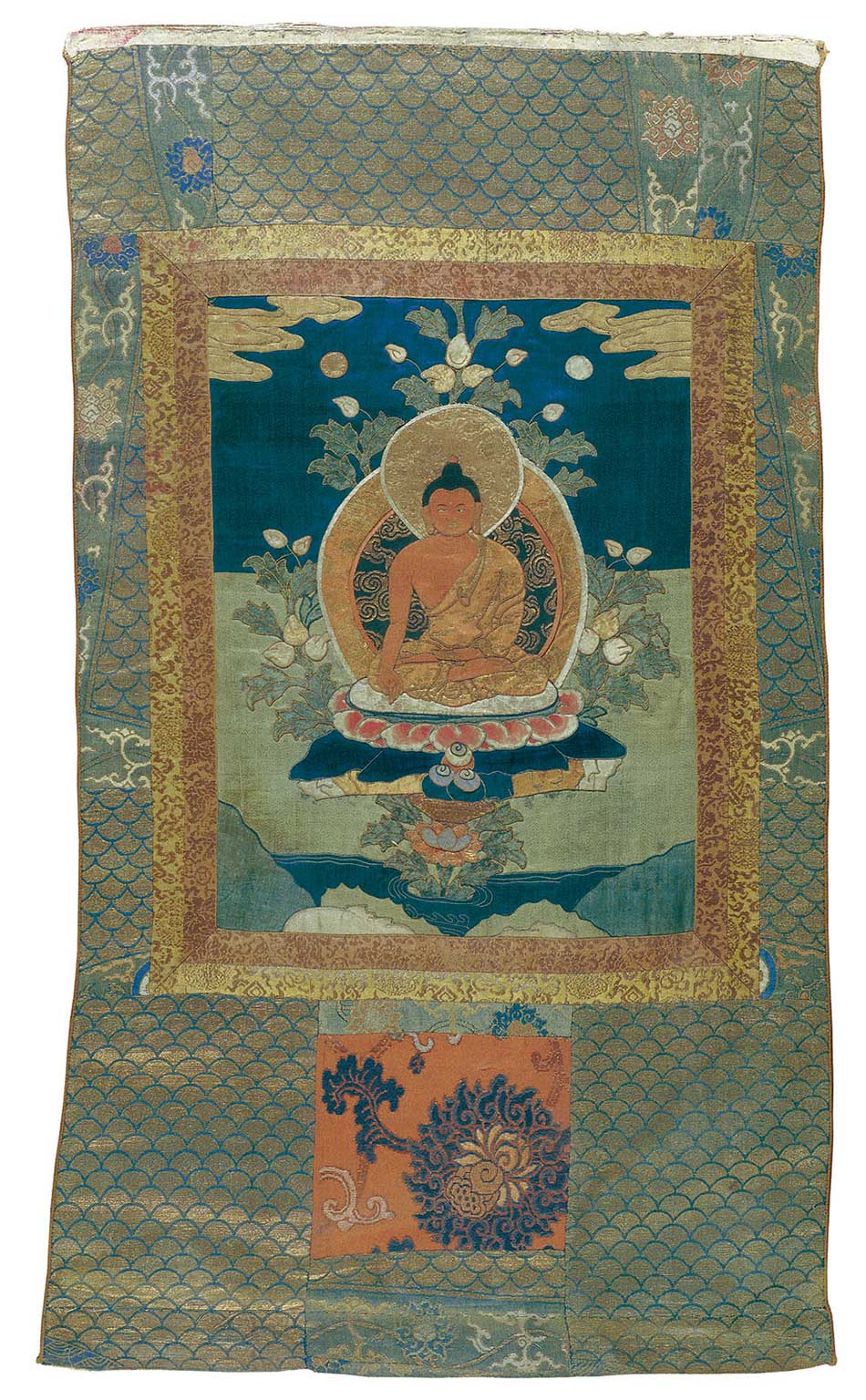 By Jean-Paul Desroches, extracted from the Exhibition Catalogue

Because of its exclusivity, Chinese silk was highly prized by foreigners as a coveted commodity and an instrument of diplomacy. Chinese diplomacy centered on the person of its ruler, whose distribution of lavish gifts, including silk fabrics and robes, bolstered efforts to secure the loyalty and support of foreign allies. Diplomacy also involved authorized commerce between foreigners and imperial China. Interaction between Tibet and China began in the 10th century. After the collapse of the Tang dynasty, the Tibetans established a rival dynasty, the Xia, which controlled trade with Central Asia and the West. Although Tibetan imperial ambitions were crushed by the Yuan dynasty in the 13th century, its leaders continued to enjoy special prominence due to the strong attachment of the Mongol court to Tantric Buddhism. 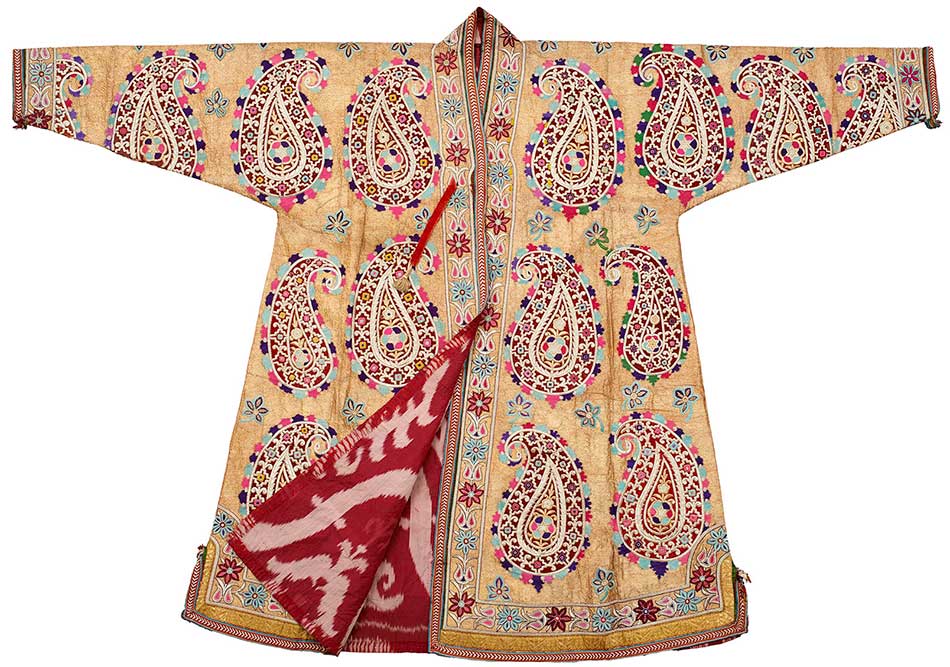 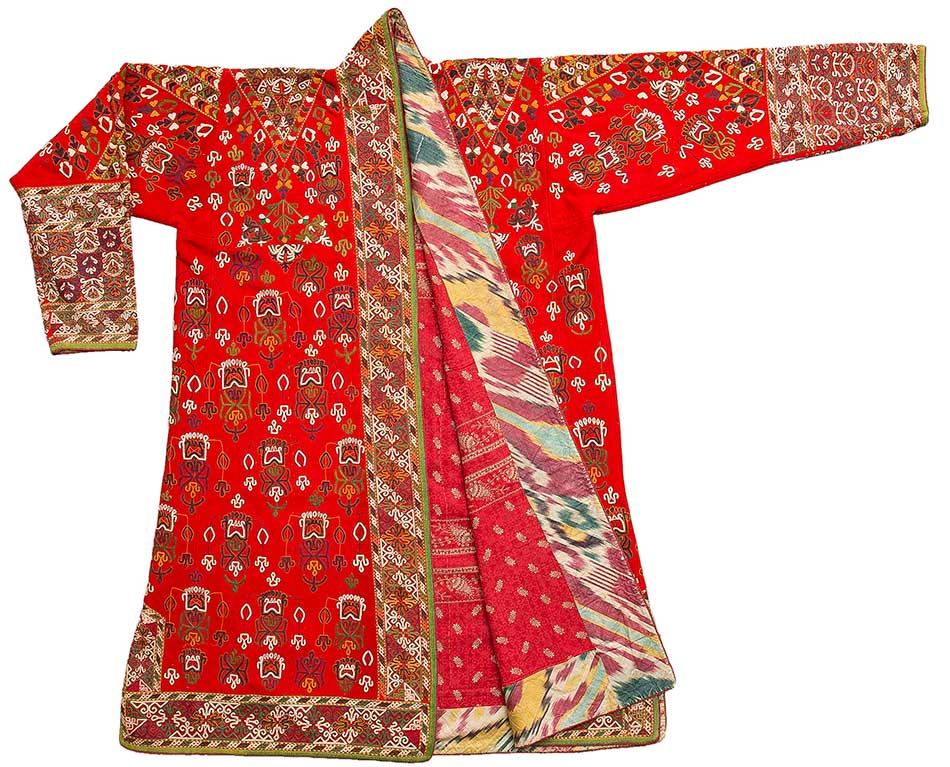 KOREA
The World as a Garden 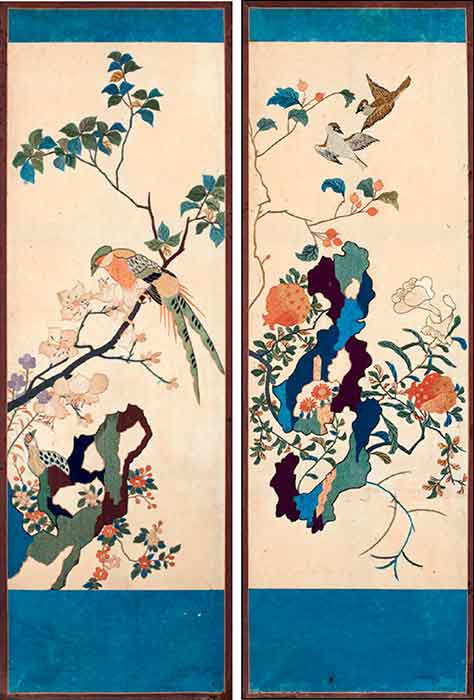 By Pierre Cambon
Extracted from the Exhibition Catalogue

In the 18th century, in the women’s quarters, decoration based on the theme of “birds and flowers” (hwajodo) was found in many sorts of materials: lacquer chests, blue and white porcelain and of course painting.
This theme of good luck and prosperity featured images of spring, marital happiness and fidelity, with pairs of birds flying freely among trees and flowers. Such decoration reflects the tradition of Chinese painting. 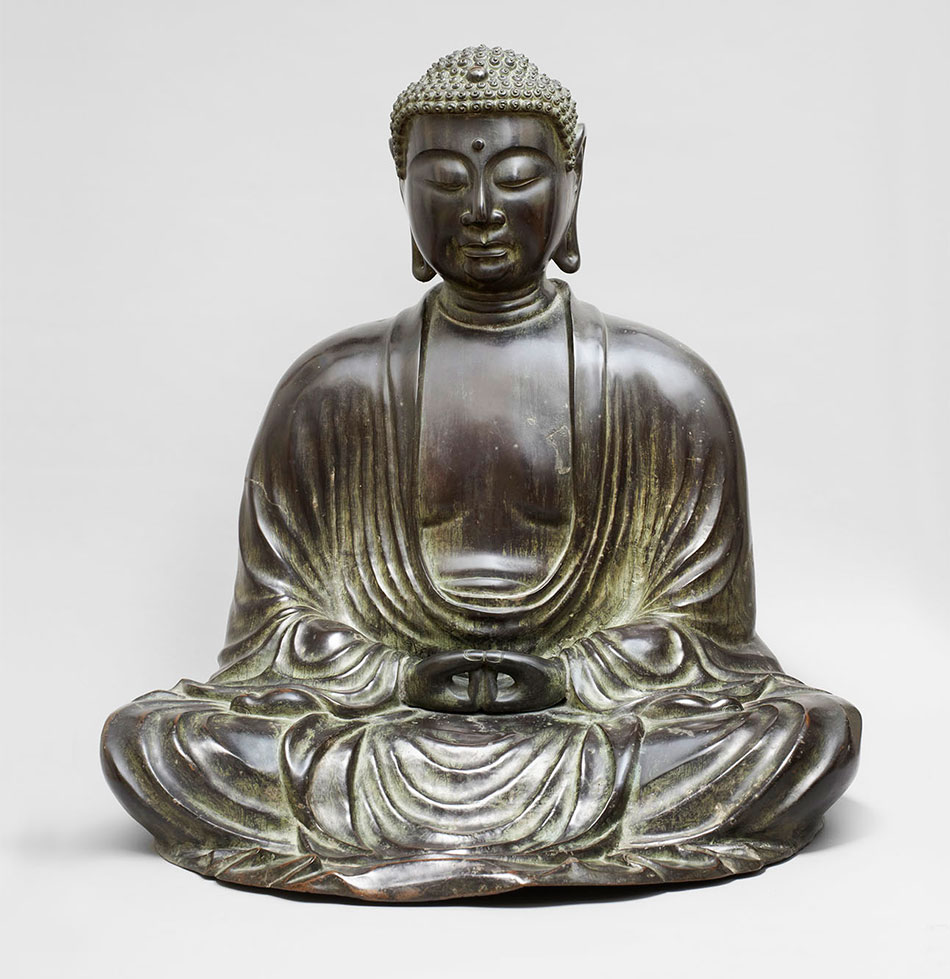 By Myrna Myers, extracted from the Exhibition Catalogue

The long robe worn by men and women since the 16th century, the kimono, is symbolic of Japan. It derives from the kosode, which is much older and served as the undergarment of aristocrats as well as others. Its form in a “T” is fashioned from four bands of material folded in two and stitched side by side to form the sleeves and body of a robe which opens in front. When worn, one panel crosses the other and is retained at the waist by a fabric belt, the obi. Reduced to its essentials, it is astoundingly modern. The kimono offers an ideal background for decorative propositions which are often unique, drawn from an inexhaustible iconography. The result is so many poems to wear. 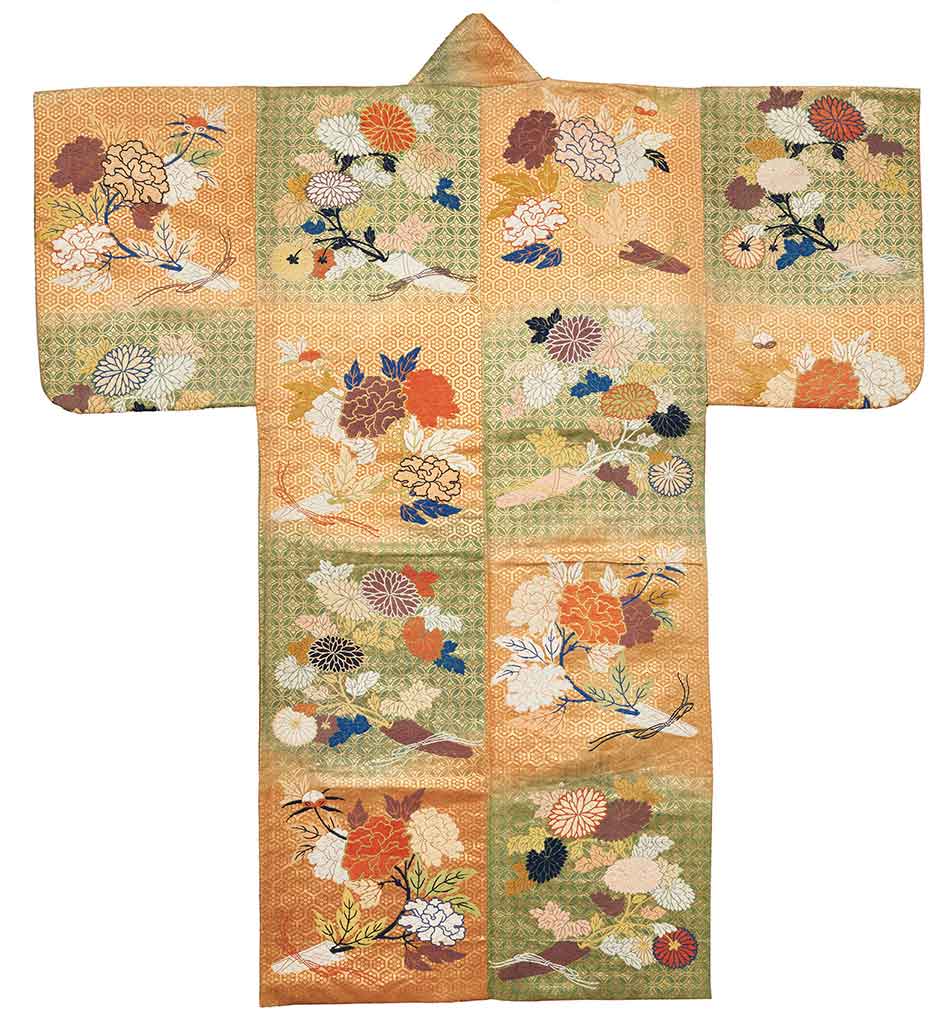 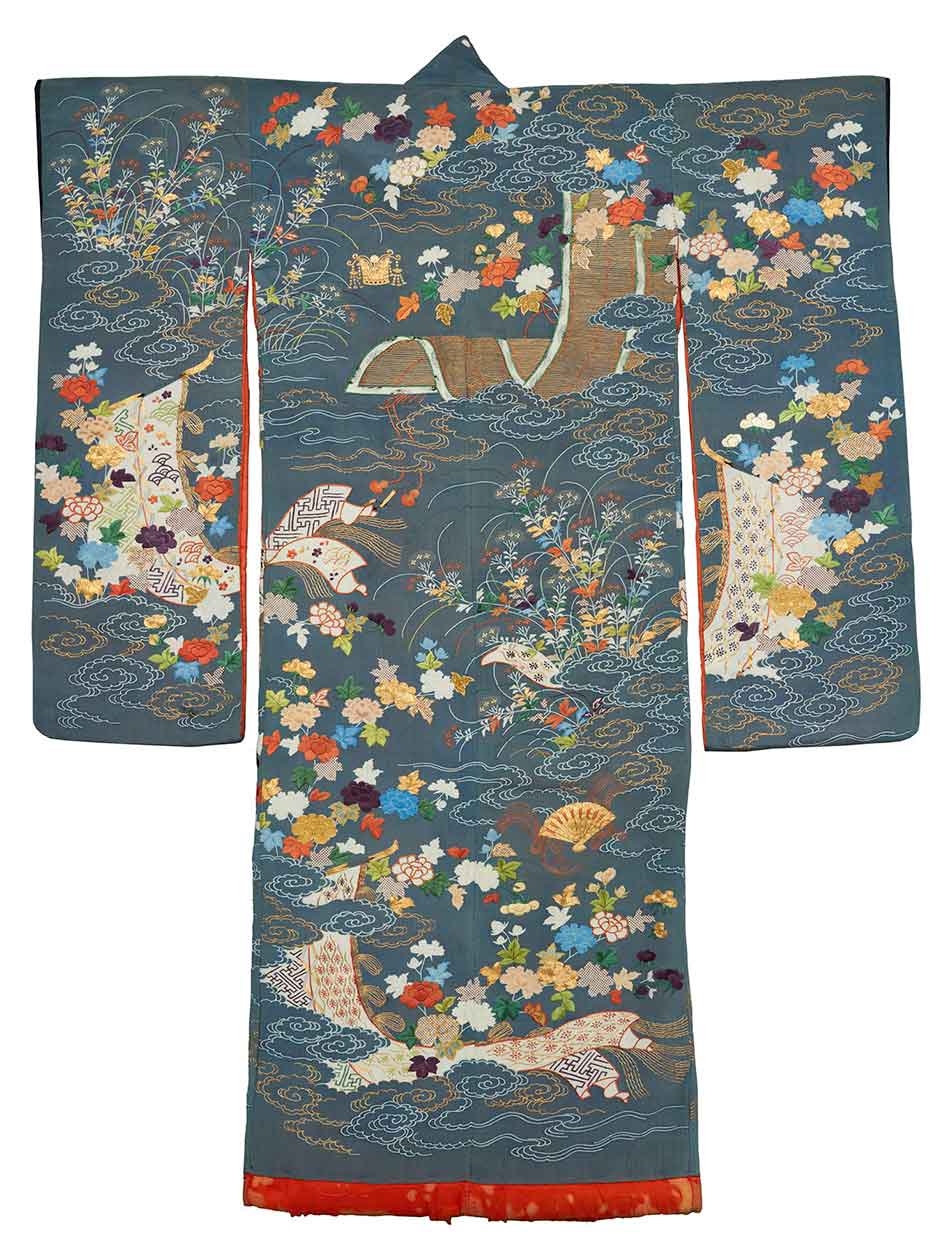 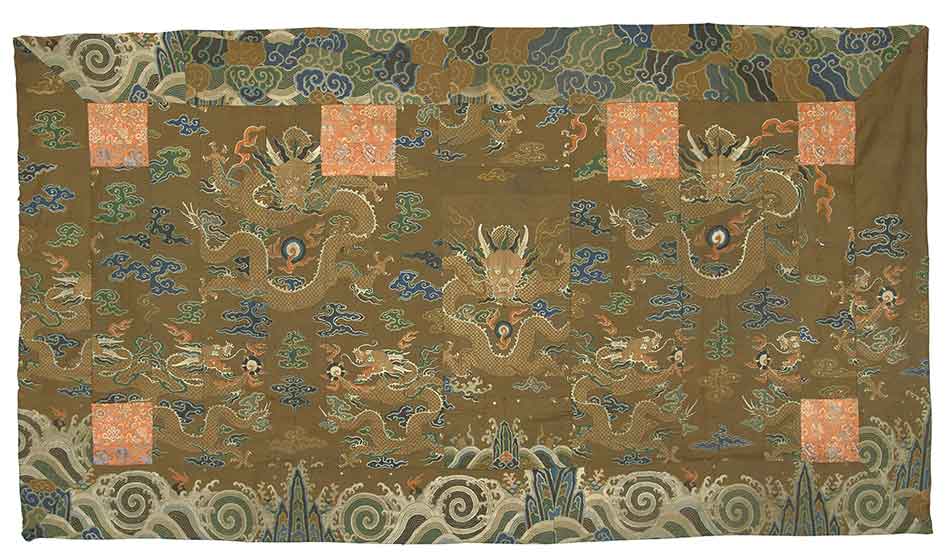 JAPAN
The Art of the Tea Ceremony 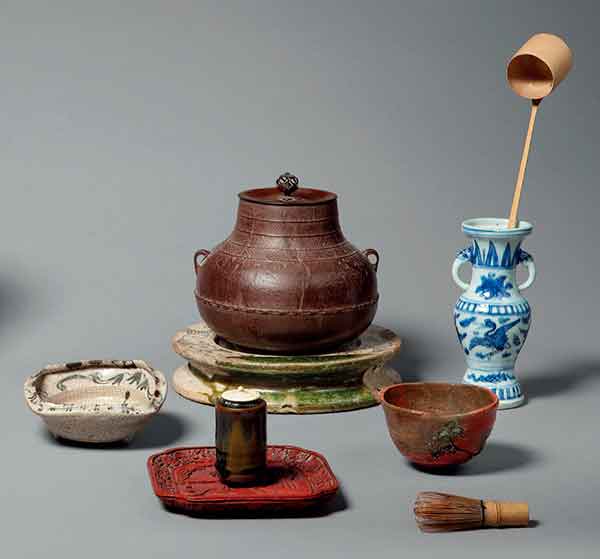 By Myrna Myers
Extracted from the Exhibition Catalogue

The preparation and drinking of tea in a ritual manner became a living tradition in Japan which called for selecting utensils appropriate for each unique gathering of devotees.

Among the essentials are the tea bowl (chawan); the jar for powdered tea (cha-ire); the storage jar for leaves (chatsubo); the fresh water jar (mizusashi); the kettle (kama); the incense burner (koro); an incense box (kogo); and a vase for flowers (hana-ire).

If special foods are offered, serving dishes (mukozuke) are needed. The ceramics, lacquer, metalwork and bamboo tea utensils which accorded with the aesthetic criteria set by successive tea masters have been revered for centuries. 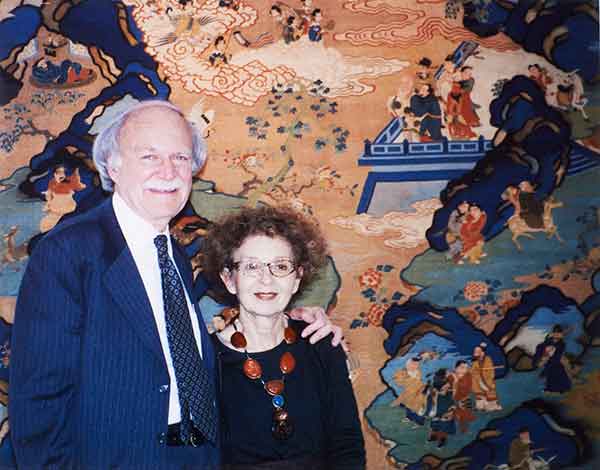 By Jean-Paul Desroches
extracted from the Exhibition Catalogue

Sam and Myrna Myers are two Americans who fell in love with Paris in the mid-60s and decided to move there. Over five decades they amassed more than 5000 works of art, ffering a very personal vision of the world of Asian art, coherent and well documented.
While Paris was their center, the initial spark for their collecting was the small town of Ascona on Lago Maggiore where the couple arrived on vacation quite by chance. Over the next ten years, Sam and Myrna vacationed in Ascona. It was in 1966 during their first visit that they discovered Casa Serodine, an antique gallery where they met Dr. Rosenbaum (1894 – 1984), an erudite antique dealer who became their mentor and helped them realize that, despite limited means, it was possible to acquire authentic antiquities. 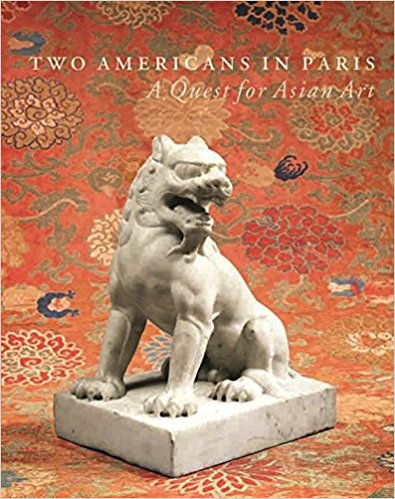 Two Americans in Paris
A Quest for Asian Art

This exhibition is produced by Pointe-à-Callière, Montréal Archaeology
and History Complex, Montréal, Canada,
in partnership with Sam Myers 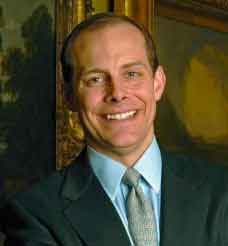 Eric M. Lee
Director of the Kimbell Art Museum
“In following their passion, Sam and Myrna Myers have assembled one of the finest Asian art collections ever amassed,” “These objects create a rich, complex and magical tapestry—a panoramic history of Asian cultures from ancient times to modern days.” 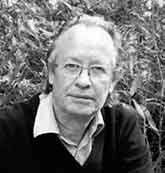 The exhibition was curated by Jean-Paul Desroches
Former chief curator of the Musée des Arts Asiatiques Guimet, Paris, and senior curator of the French National Patrimony 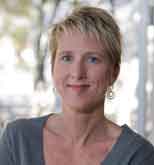 Jennifer Casler Price
Curator for Asian and Non-Western Art at Kimbell Art Museum
“This exhibition provides a unique opportunity for visitors to experience a journey of discovery—much as the Myers did over the course of 50 years of collecting—through an extraordinarily diverse and impressive range of Asian works of art,” 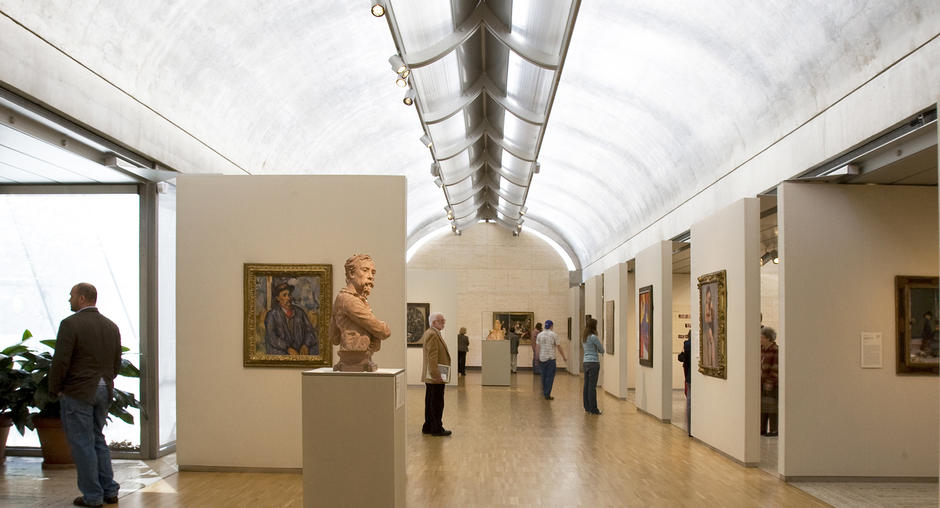 The Kimbell Art Museum, owned and operated by the Kimbell Art Foundation, is internationally renowned for both its collections and for its architecture. The Kimbell’s collections range in period from antiquity to the 20th century and include European masterpieces by artists such as Fra Angelico, Michelangelo, Caravaggio, Poussin, Velázquez, Monet, Picasso and Matisse; important collections of Egyptian and classical antiquities; and the art of Asia, Africa and the Ancient Americas.