In 1938, Talladega College President Buell Gallagher commissioned Hale Woodruff the two cycles of murals, The Mutiny on the Amistad and The Founding of Talladega, are vibrant depictions of events symbolizing the centuries-long African American struggle for civil rights. These exceptional paintings have just been restored and are on a one-time national tour before returning to their permanent home in Alabama.

The Mutiny on the Amistad 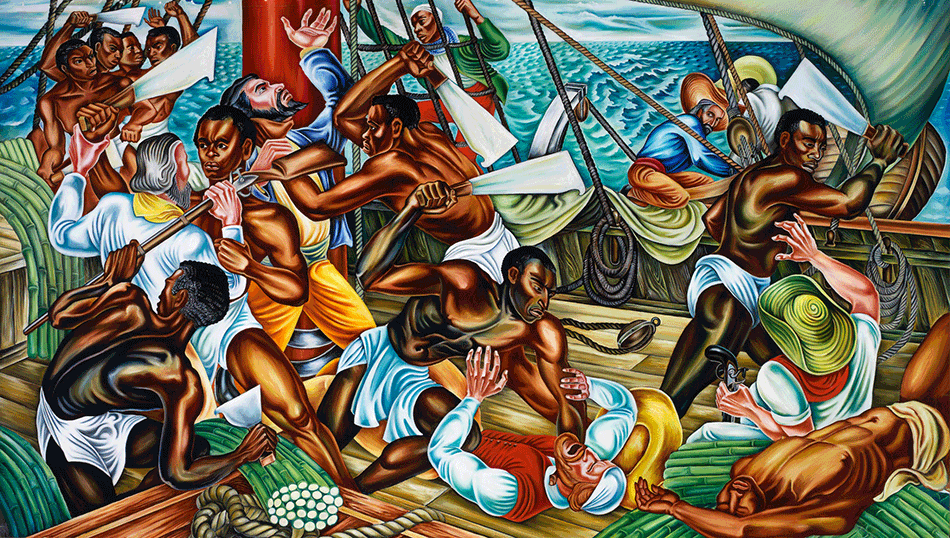 The Mutiny on the Amistad – In 1839 on the West Coast of Africa, 53 Africans were kidnapped from Mende country (modern Sierra Leone) and sold into Spanish slave trade. The men, women and children were shackled and loaded aboard a ship where they endured physical abuse, sickness, and death during a horrific journey to Havana, Cuba. Led by Senbeh Pieh (Cinque’), the Africans revolted, took control of the ship, which was eventually seized by an American naval vessel.  The Africans were jailed and charged with piracy and murder.

The Trial of the Amistad Captives

The Trial of the Amistad Captives heralds their judicial fight for freedom.  The case took on historic proportion when former President John Quincy Adams argued on behalf of the captives before the U.S. Supreme Court.  This was the first civil rights case in America. In 1841, the 35 surviving Africans won their freedom when the U.S. Supreme Court ruled in their favor.  Out of this case and the Amistad Committee, the Mende Association was formed which later became the American Missionary Association (A.M.A.) (Talladega College is one of the distinguished colleges emerging from the efforts of the A.M.A.)

The Repatriation of the Freed Captives 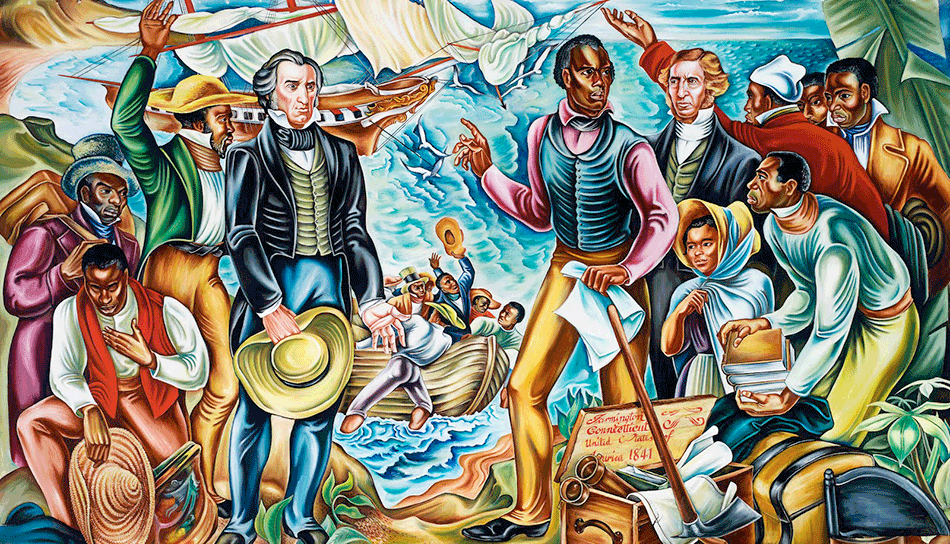 The Repatriation of the Freed Captives – The third panel represents the landing of the repatriated slaves on the shores of Africa. Here, the principal figures are Cinque’, the missionaries, James Steele with his sea chest, and the little Black girl, Marque, who in later years had a son who returned to graduate from Yale University with a Ph.D. degree.  In the background lies their ship at harbor, and a boatload of their party just landing on the beach.

The Underground Railroad – The story of the Underground Railroad is one of individual sacrifice and heroism in the efforts of enslaved people to reach freedom from bondage.  It was perhaps the most dramatic protest against slavery in the United States.  Its operation began during the colonial period and later became part of organized abolitionist activity in the late 19th century, and reached its peak in the period of 1830-1865. While most runaways began their journey unaided and many completed their self-emancipation without assistance, each decade in which slavery was legal in the United States saw an increase in the public perception of an underground network and in the number of persons willing to give aid to the runaway.

Opening Day at Talladega College- Freedmen were poor, they are therefore, depicted bartering with their chickens, pigs, barrels of fruits and vegetables, musical instrument, a plow and sugar cane to pay tuition on the first day of registration. They are advised by the counselor and curriculum coordinator relative to classes and what to expect in school.  In the background is Swayne Hall, the oldest building on campus.

The Building of Savery Library 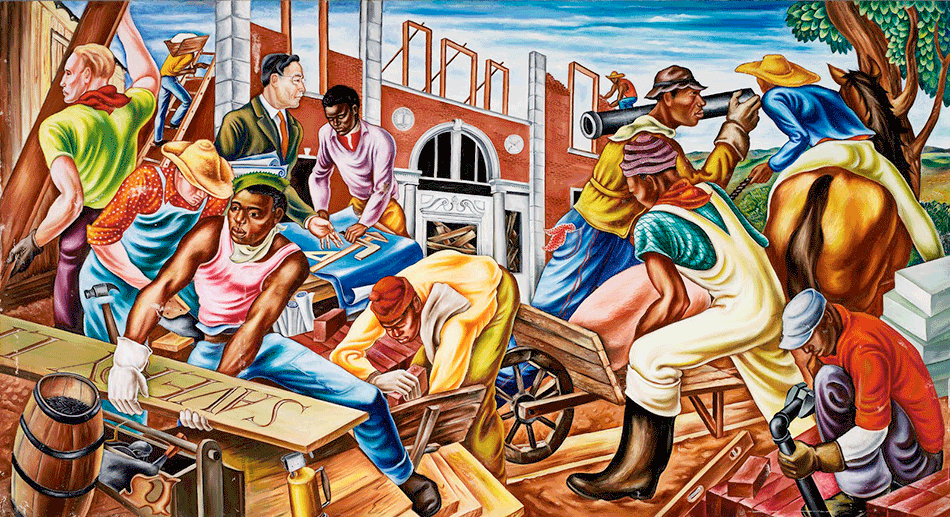 The Building of Savery Library – Funds raised by Talladega College, individual contributions, grants, sale of college land and insurance on a barn destroyed by fire allowed for the construction of Savery Library. Construction began in September 1937, with Joseph Fletcher, a 1901 alumnus, superintendent of buildings and grounds, in charge.  Fletcher engaged an interracial work crew with Talladega students furnishing much of the labor. Fletcher viewed the library as his masterpiece. 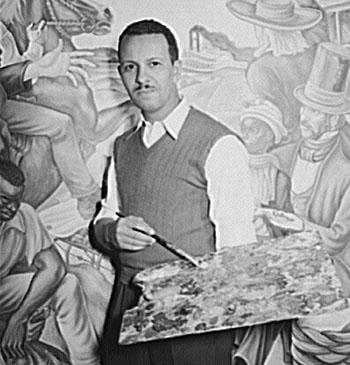 Hale Aspacio Woodruff (1900-1980) was one of the leading African American artists and arts educators of his generation, and the Talladega Murals are among his most important works.

Born in Cairo, Illinois, and raised in Nashville, Tennessee, Woodruff enrolled after high school at the John Herron Art Institute (now the Herron School of Art & Design) in Indianapolis. In 1927 he left for France to study the newly-emerging style of cubism, which he adapted for some of his earlier paintings. Woodruff returned to America in 1931 and joined the faculty of Atlanta University (later Clark Atlanta University) as its first art instructor.

The development of the university’s historic collection of African American art was due in large part to Woodruff’s efforts. In 1936, Woodruff traveled to Mexico to apprentice with the famous muralist Diego Rivera. This time with Rivera inspired Woodruff to embrace a storytelling aesthetic in his art, which is vividly on display in the Talladega murals.

In 1943, Woodruff moved to New York and stayed there for the remainder of his professional career. In 1946 he accepted a position at New York University and taught art for more than twenty years until his retirement in 1968. Woodruff’s artistic work has been the subject of major exhibitions at the Studio Museum in Harlem (1979) and the High Museum in Atlanta (2004). 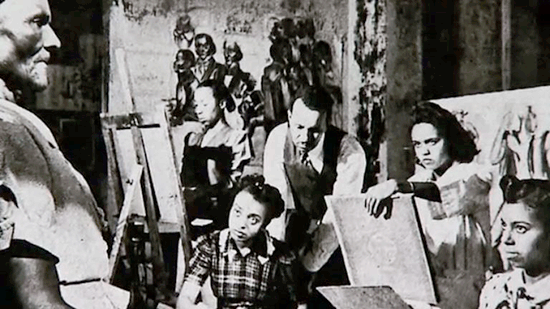 In addition to his own artistic creativity, Woodruff also served as a teacher and mentor for an entire generation of African American artists throughout the mid-20th century.

In 1942, he launched the Atlanta University Art Annuals, a series of national art exhibitions for African American artists—including Jacob Lawrence—who could not show their work at white-only museums and galleries.

In 1967, New York University honored Woodruff with a Great Teacher Award and with a retrospective of his paintings and drawings.

“These dynamic works serve not only as magnificent examples of the art of mural painting, but also as dramatic depictions of highly symbolic events in history,” said Julián Zugazagoitia.

Menefee D. and Mary Louise Blackwell CEO & Director of the Nelson-Atkins. “Seventy-five years after they were painted, these murals are vivid reminders of the struggle for human justice and brotherhood–a struggle that continues to this day.”

“Although painted for a local audience, Woodruff’s murals reached beyond Talladega’s campus to attract national attention as an artistic triumph, a statement of pride, and an emblem of hope for racial equality,” said Stephanie Fox Knappe,

Samuel Sosland Curator, American Art. “Today these murals remain symbols of the centuries-long struggle for civil rights. We are honored to showcase them in Kansas City before they return to the walls of Savery Library at Talladega College and delighted that their presentation at the Nelson-Atkins coincides with the tribute to Woodruff mounted by The American Jazz Museum.”

The restoration and Tour

In 2011, at the request of President Billy C. Hawkins and the Talladega College Board of Trustees, art conservators and handlers from the High Museum in Atlanta began the process of conserving the murals in order to preserve them for future generations. After a 12-month restoration process, the murals began a three-year tour with the title Rising Up: Hale Woodruff’s Murals at Talladega College.

The celebration of Woodruff’s life and accomplishments will reach beyond the doors of the Nelson-Atkins to become a collaborative effort between cultural organizations including The American Jazz Museum, The Black Archives of Mid-America, and Bruce R. Watkins Cultural Heritage Center.

Opening September 26, 2015 at The American Jazz Museum, “All Hail to Hale” Homecoming: the Hale Woodruff Family Collection showcases over 25 original Woodruff paintings along with a collection of personal items of the artist that have never been on public view. For a full list of programming associated with the American Jazz Museum please visit americanjazzmuseum.org.

The Nelson-Atkins will also offer an installation of works to complement Rising Up: Hale Woodruff’s Murals at Talladega College. Opening Nov. 11 in Gallery 214, American Art—In Preparation includes preparatory works drawn from the Nelson-Atkins’ permanent collection, featuring mural studies that were enlarged and transferred by some of Woodruff’s contemporaries, such as Aaron Douglas, Peter Hurd, and Thomas Hart Benton.

Admission to the museum is free to everyone 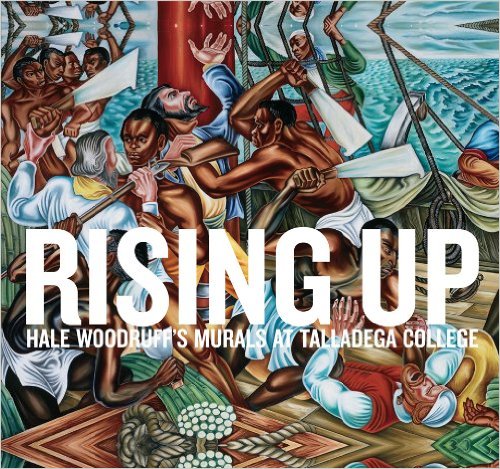 Essays consider the development of the murals, their presence and significance at Talladega College, and Woodruff’s impact on American mural painting in the years surrounding the Talladega project. An illustrated essay details all phases of the murals’ conservation. Illustrated works span Woodruff’s career and include oil studies; support materials such as prints, drawings, and photographs; and mural cycles he made in Mexico while studying with Diego Rivera.

Sponsor
In Kansas City, the exhibition is supported by the Donald J. Hall Initiative