“A portrait of a room,” should express the personality of the person
who lives there—whose character has shaped it.”
Jeremiah Goodman 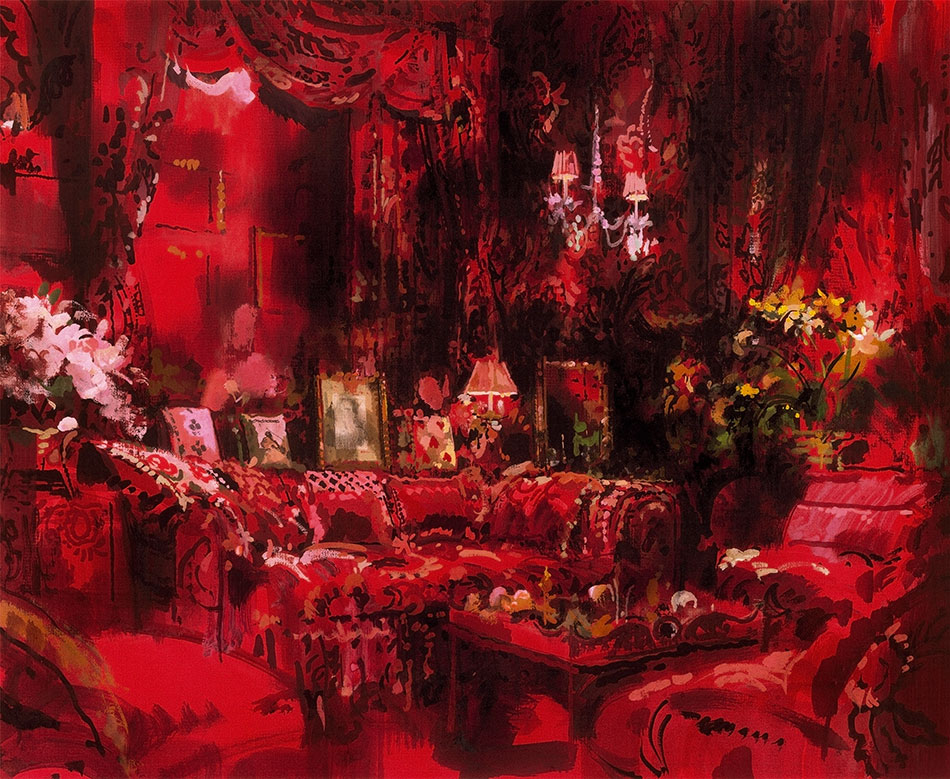 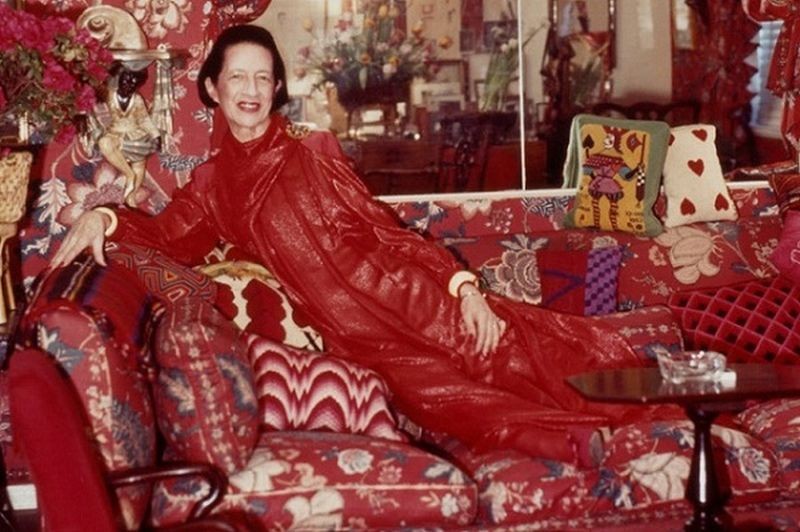 Diana Vreeland on her living room said:
“Red is the great clarifier — bright, cleansing, revealing. It makes all colors beautiful. I can’t imagine being bored with it — it would be like becoming tired of the person you love. I wanted this apartment to be a garden — but it had to be a garden in hell”.

Diana Vreeland (1903-1989) was  fashion editor of Harper’s Bazaar, Vreeland commanded and reshaped the content of fashion journalism. Later, she became the editor-in-chief of Vogue and curator on Costume Institute of the Metropolitan Museum of Modern Art in New York. 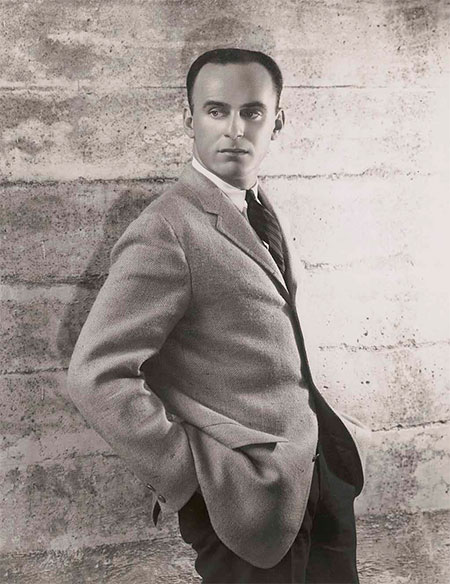 1952, the beginning of
Jeremiah’s successful career

Irving Jeremiah Goodman was born on Oct. 22, 1922, in Niagara Falls, N.Y., to Louis Goodman and the former Anna Cohen, Jewish immigrants from Russia.
He moved to New York to continue his studies and soon caught the attention of Joseph B. Platt, a prominent decorator and set designer for Broadway. After a short period in Hollywood Jeremiah returns to New York to settle in the city forever.
From 1952 onwards he worked as an illustrator for Lord & Taylor, Harper’s Bazaar and Vogue, and creating the monthly covers of Interior Design Magazine.
In parallel with this commercial activity, Jeremías made portraits of interiors depicting the homes of friends and celebrities in the world of design, entertainment and politics such as Carolina Herrera, Diana Vreeland, Elsa Peretti, Greta Garbo, Ronald and Nancy Reagan or Wallis Simpson, the duchess of Windsor.
Jeremiah’s art to represent the projects generated commissions from leading decorators such as Mario Buatta and Dorothy Draper, industrial designers such as Raymond Loewy and leading architects such as Philip Johnson and I.M.Pei.  Image: Jeremiah Goodman at age 30 (1952) 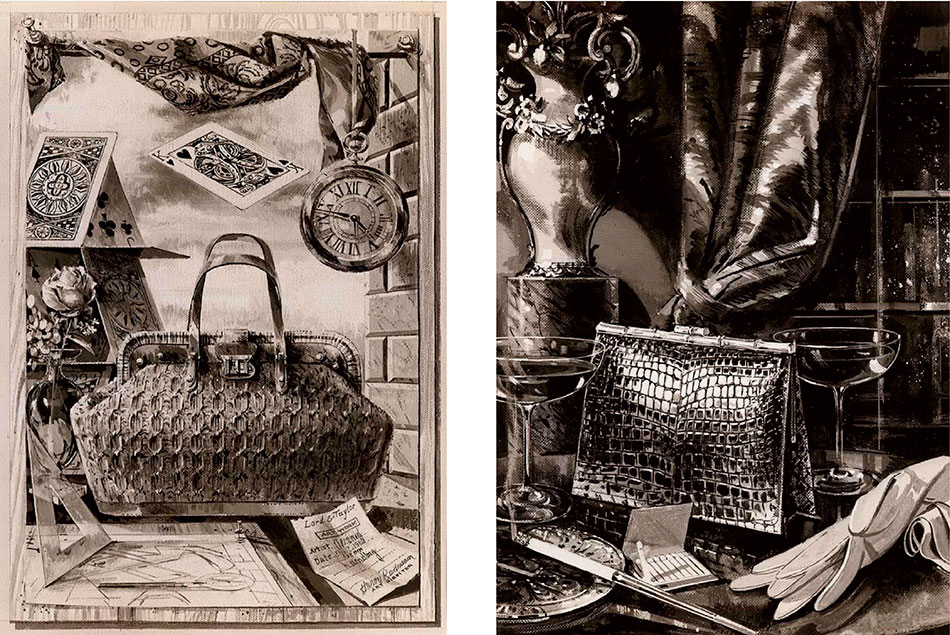 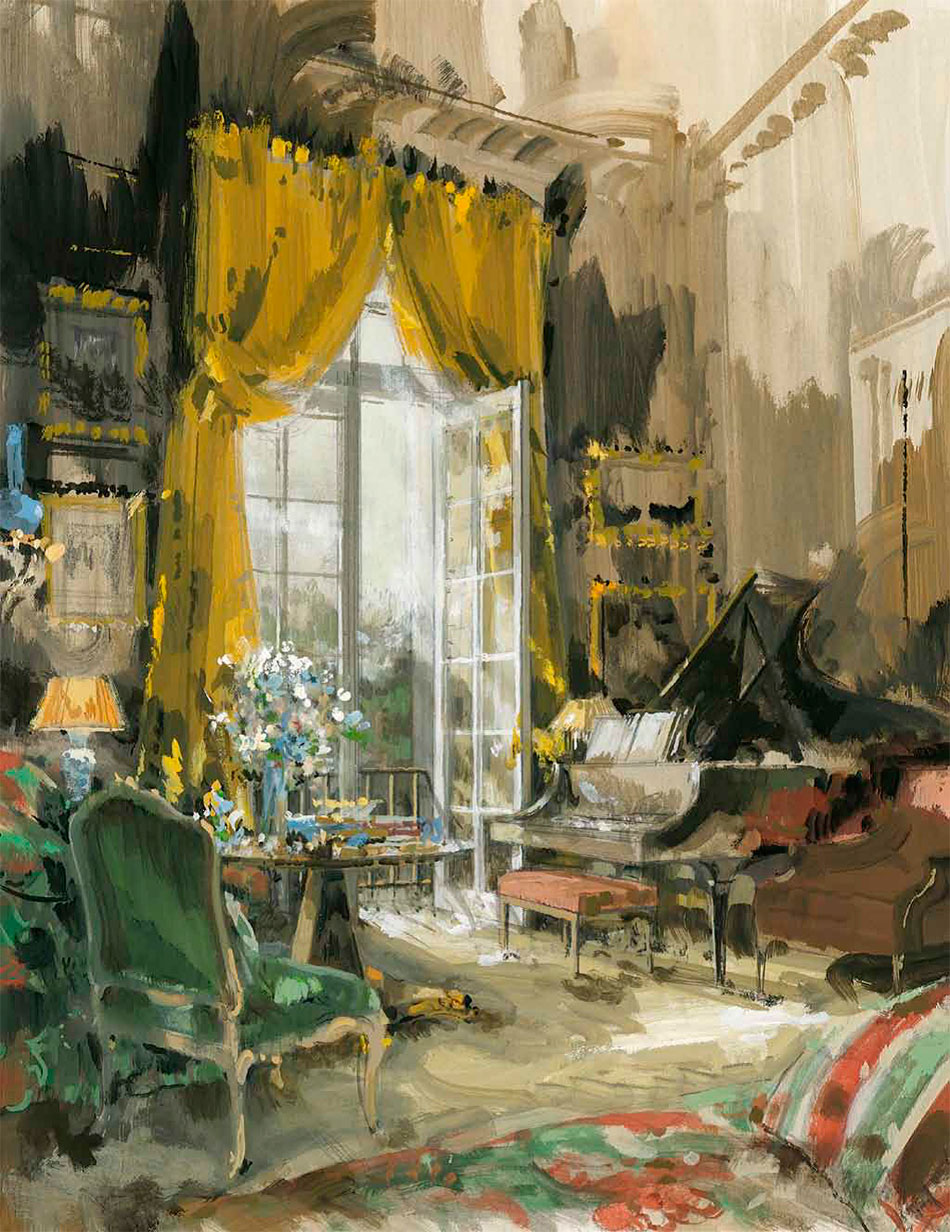 Miles Redd, the decorator, observes
“His work had a silky-smooth quality,”   “The brushstrokes seemed to almost float on top,
helping to reinforce the shape and form underneath.” 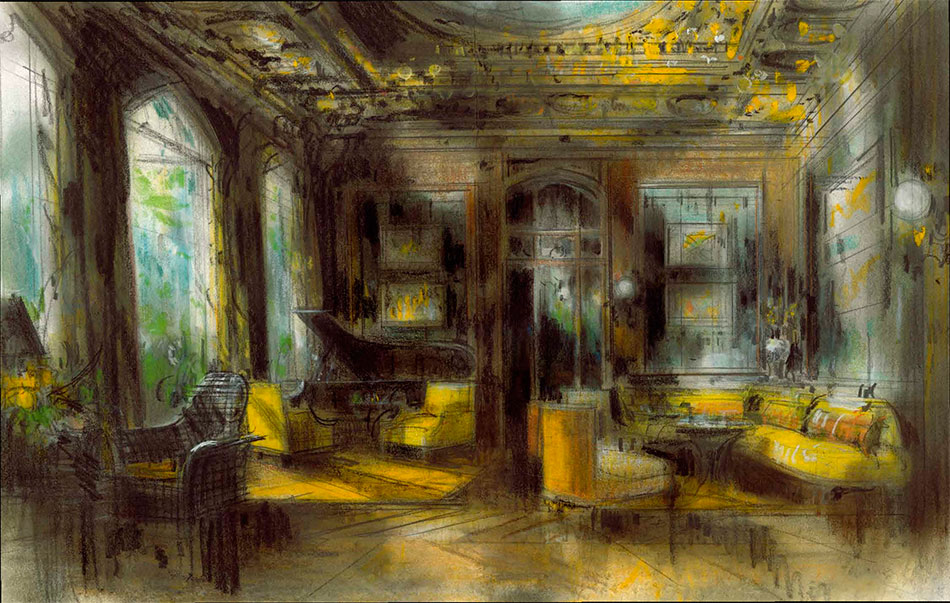 Says interior decorator Bunny Williams
“No one captured the magic of the great interiors of the past like Jeremiah Goodman,”
“I will treasure the few pieces I have of his forever.” 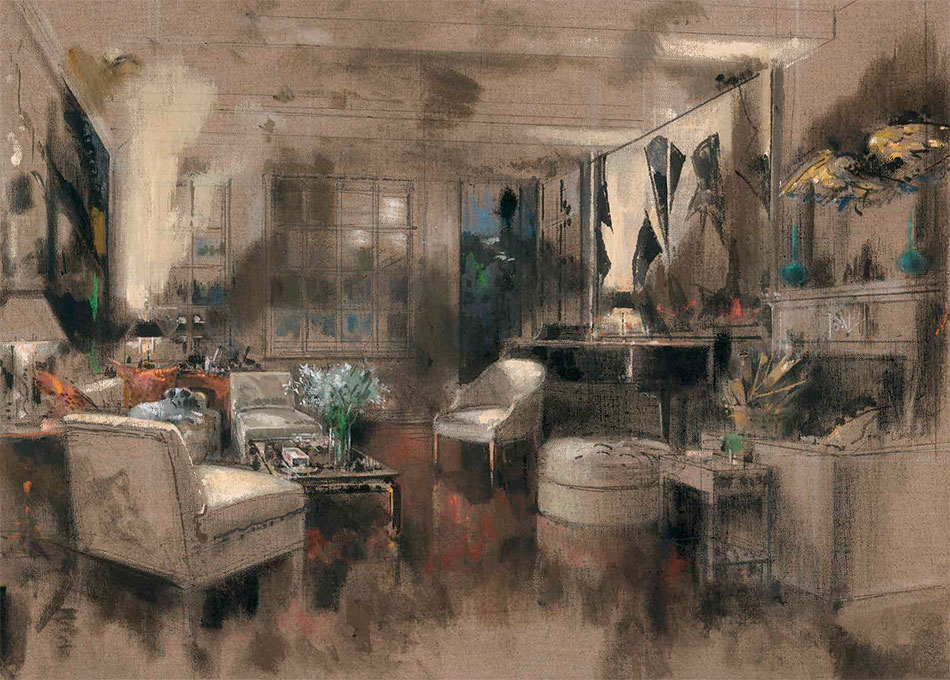 Architectural Digest quoted Bunny Williams, the interior decorator, as saying,
“No one captured the magic of the great interiors of the past like Jeremiah Goodman.” 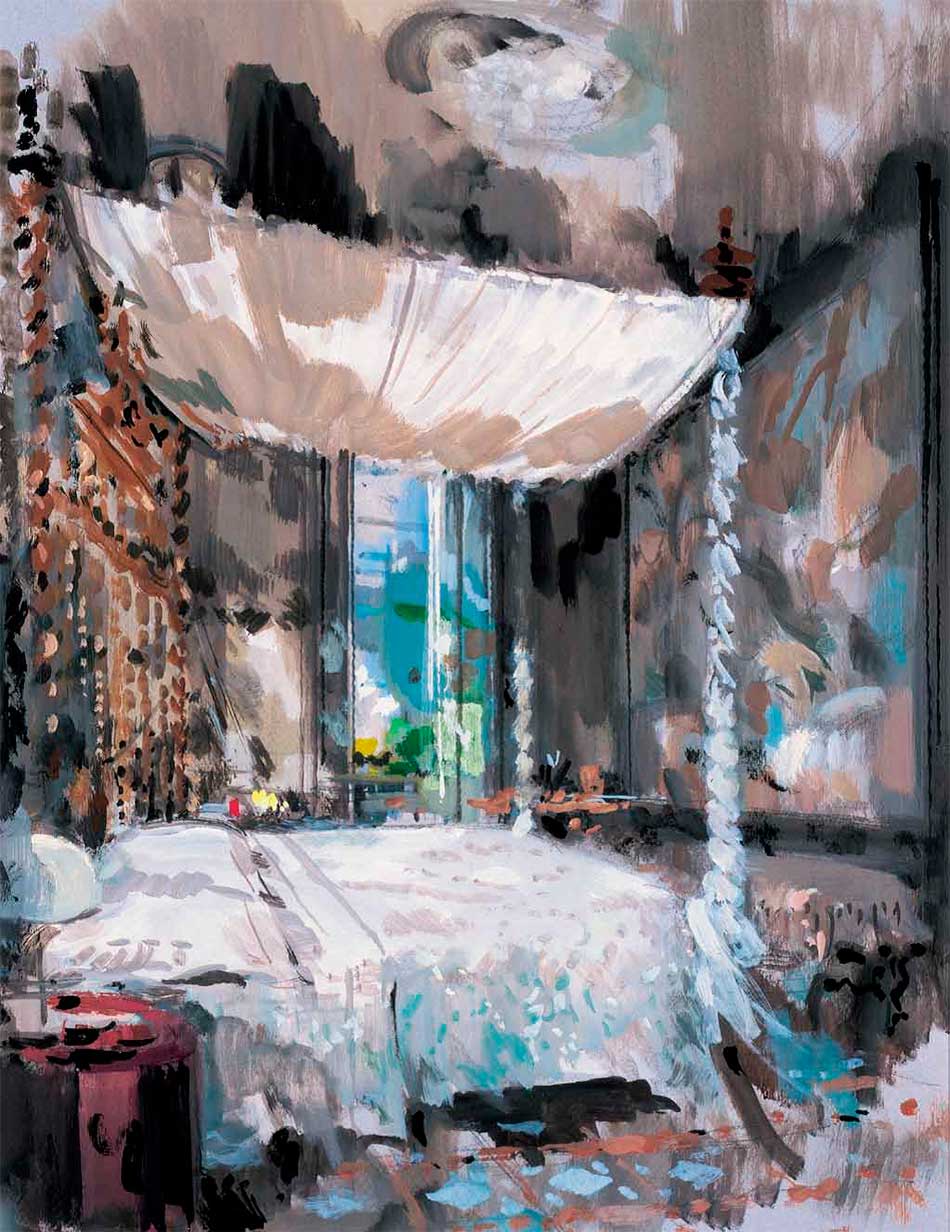 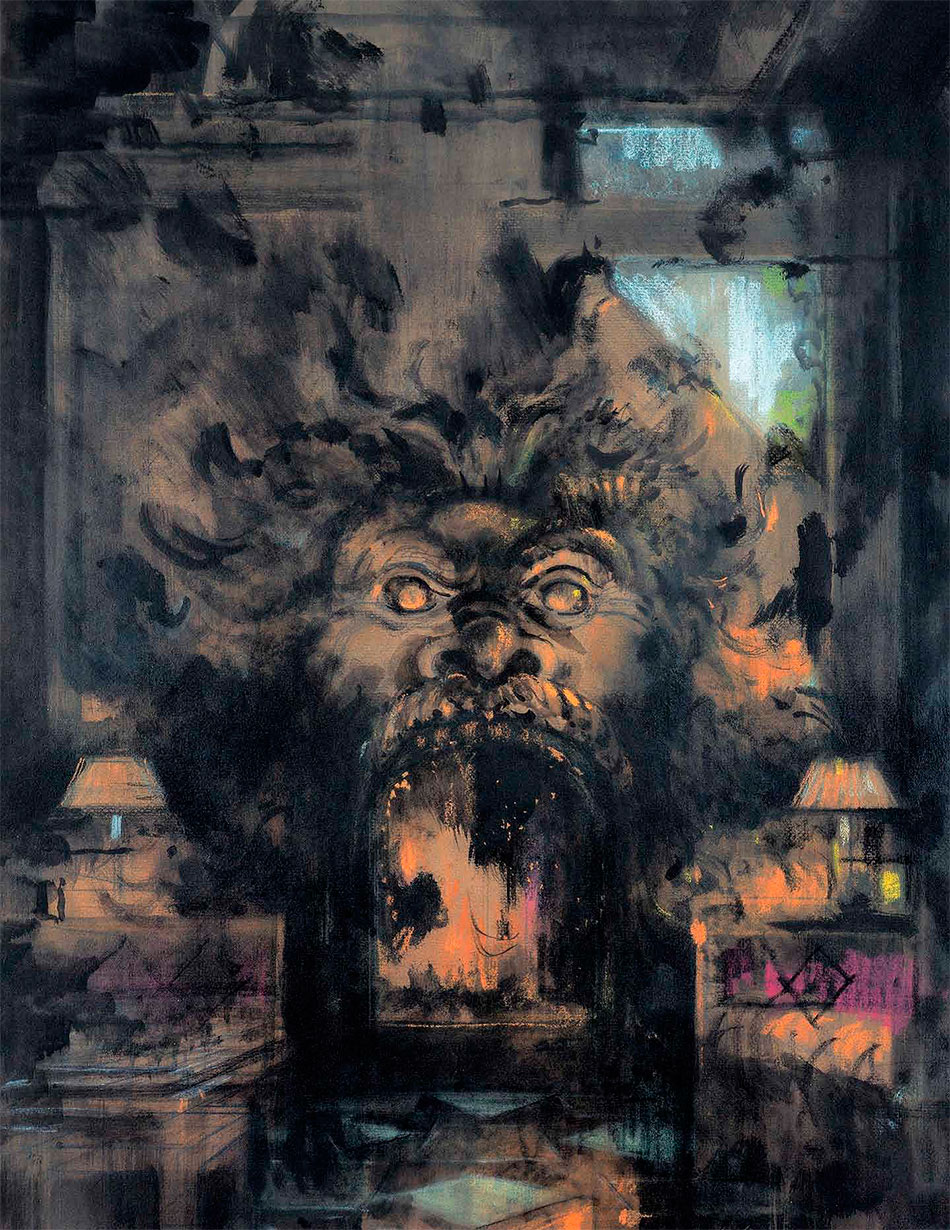 “Jeremiah’s work represents the essential of what I dreamed; he was able to find the real soul
of a place that, after his work, becomes richer and more spiritual. Jeremiah was a very
powerful magician, feeling the atmosphere and capturing it like no one I know.”
Elsa Peretti 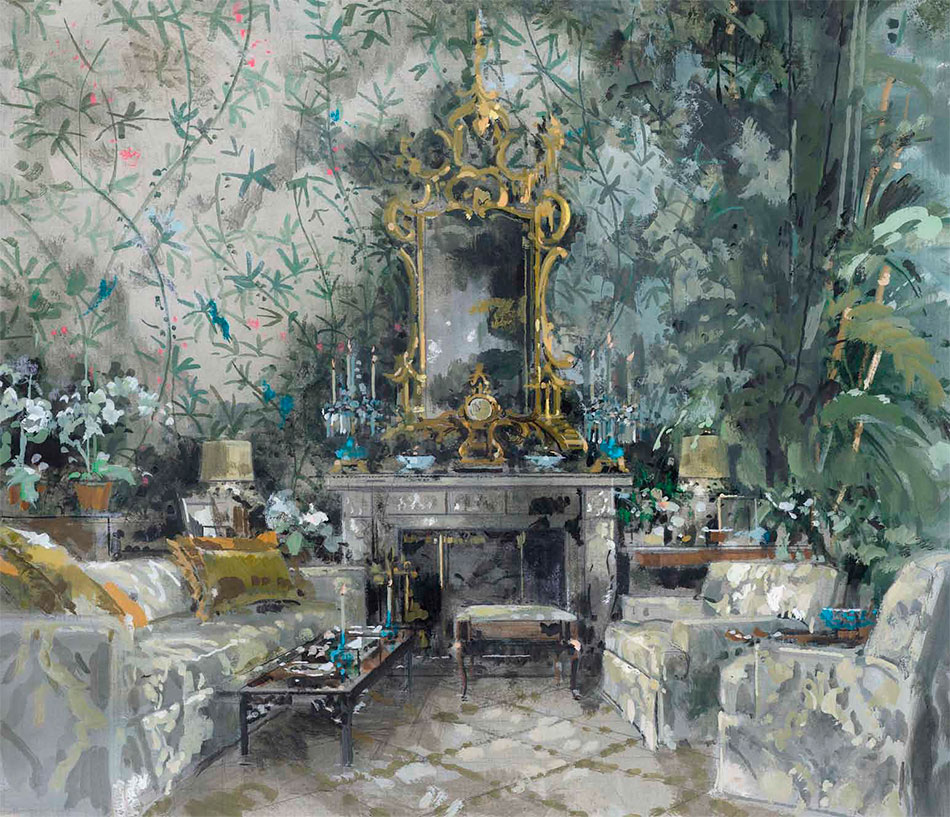 Decorator Frank di Biasi observes
“More glamorous than they were even in person!” 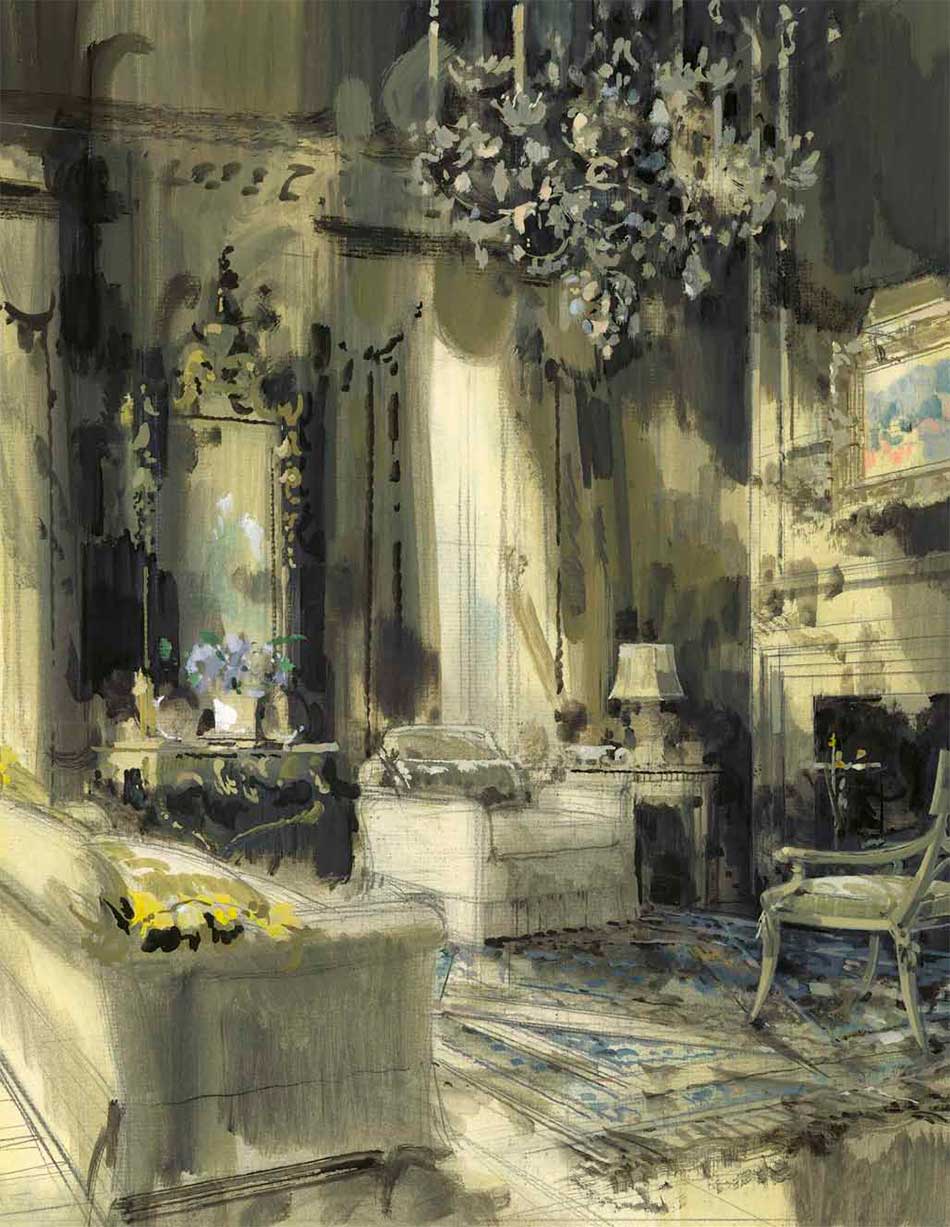 Jeremiah’s interior portraits are evocative of the era and suggest details
that allow us to identify fabrics, textures, furniture styles… 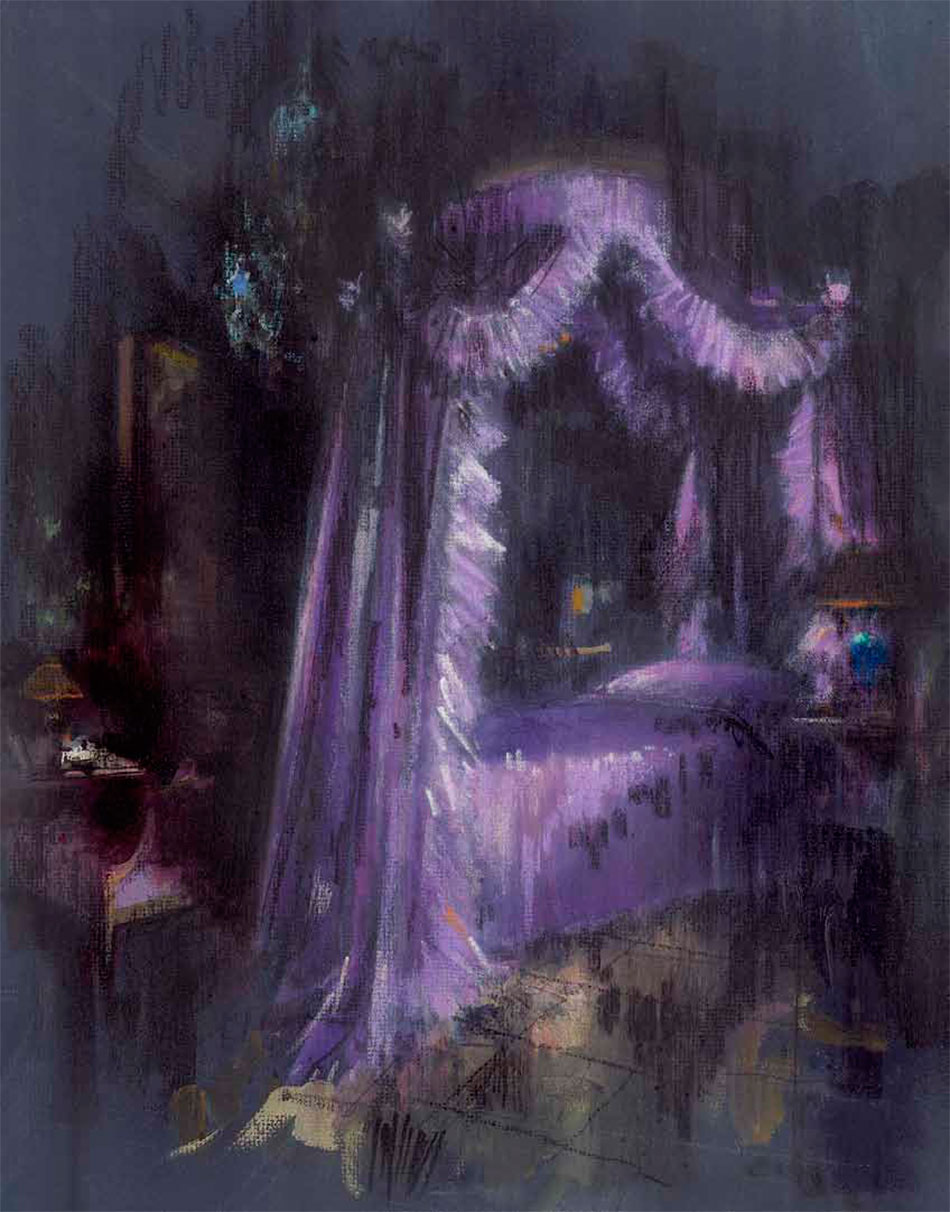 Recalls architect Lee Mindel, who profiled Goodman in 2014
“He added wit, charm, light, romance, glamour, and a sense of history to everything.” 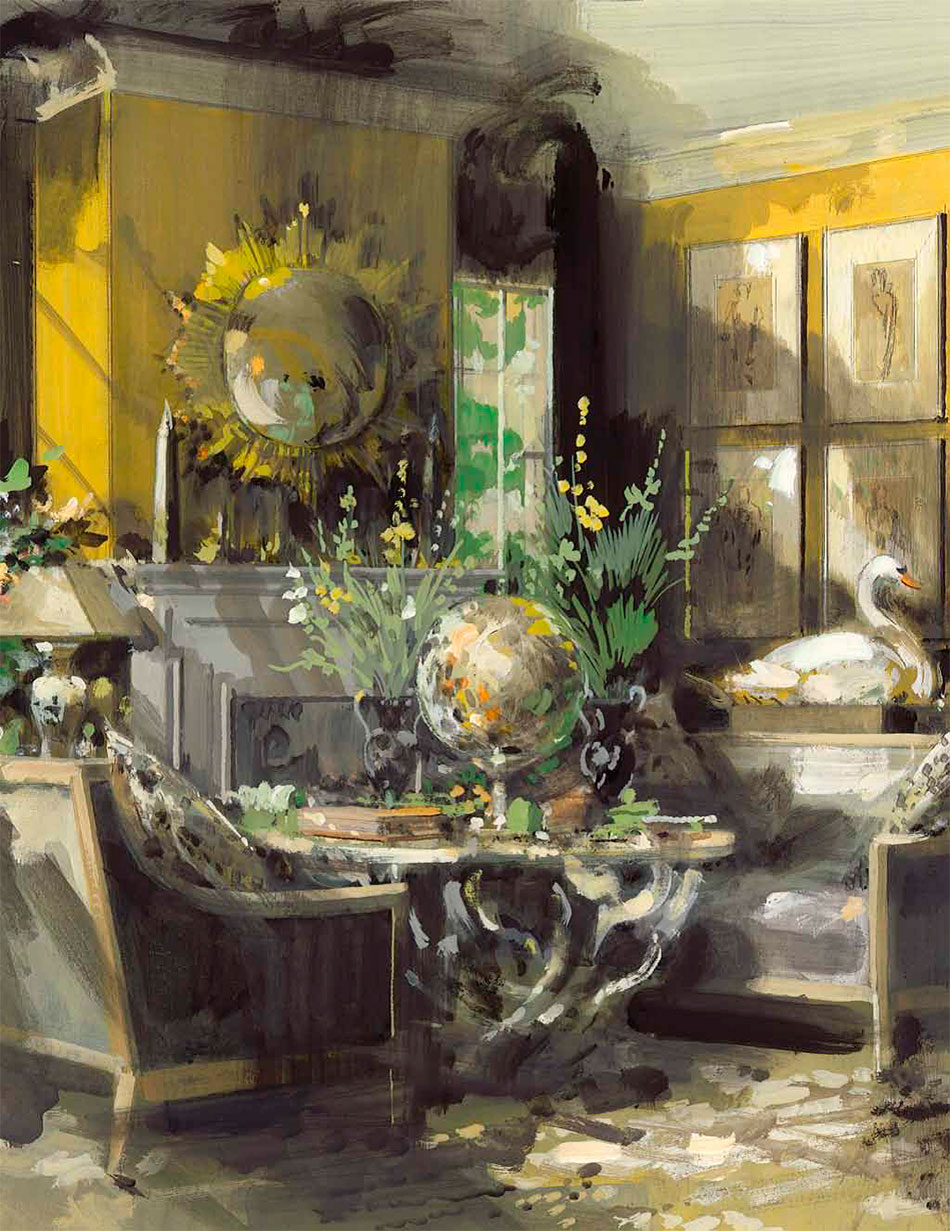 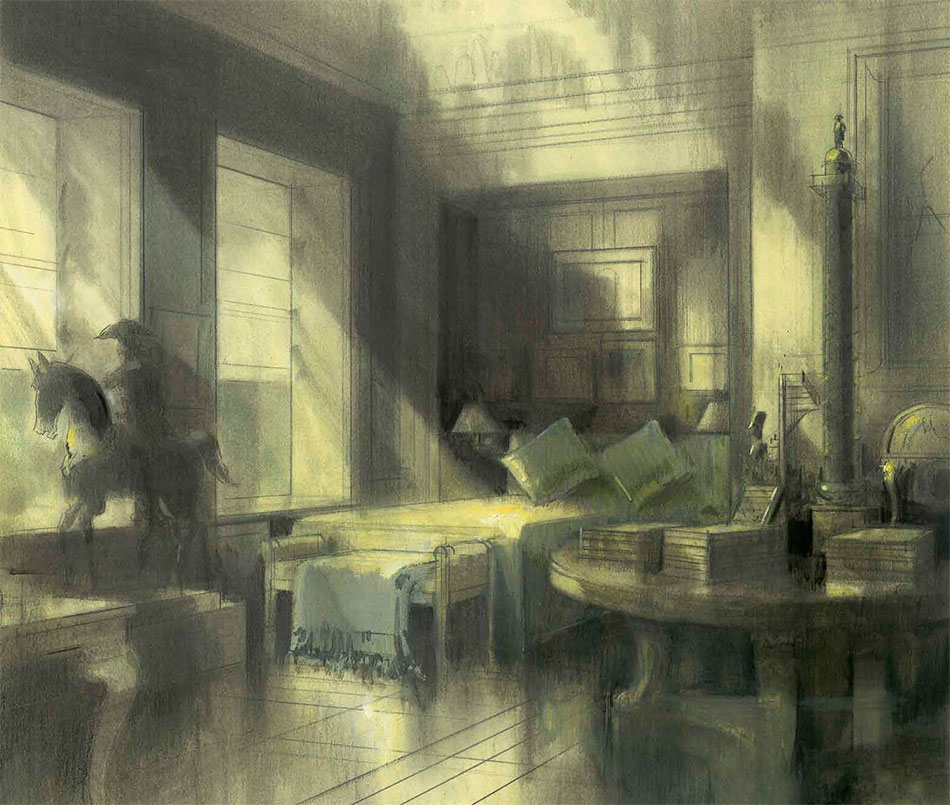 Sensitivity and art, but also a deep knowledge of styles and materials.
Jeremiah paints what he knows 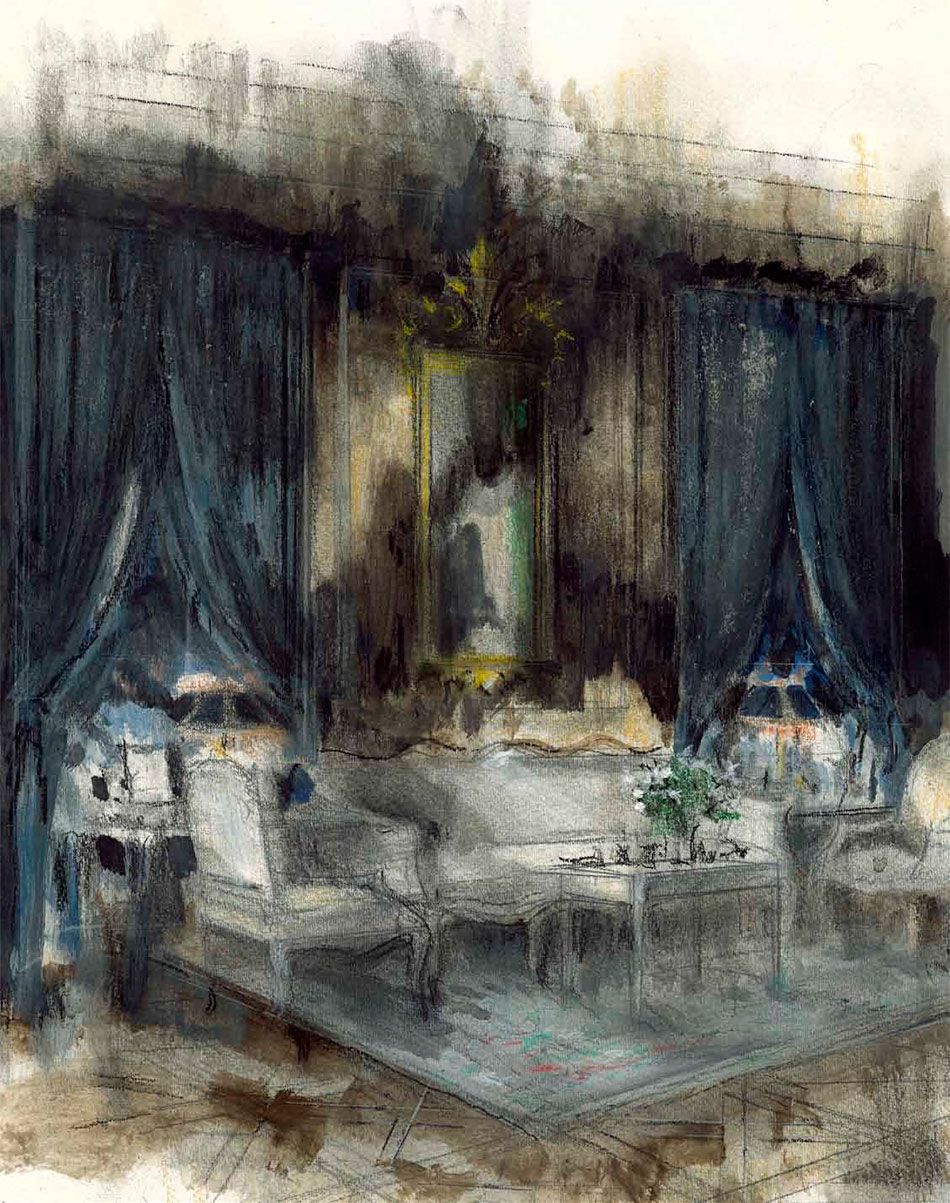 The covers for Interior Design Magazine 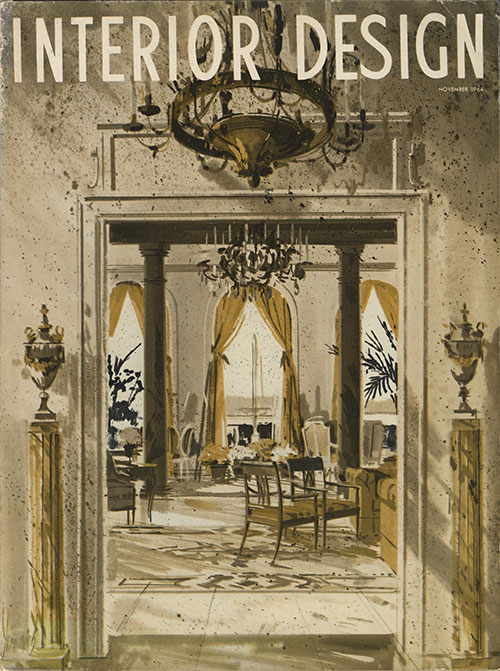 Beginning with his first cover illustration in 1957, Jeremiah was instrumental in shaping the experience of the magazine’s readers for almost 15 years.

Each month he would discuss the image to be featured on the cover with the magazine’s editor, Sherman Emery, then present a drawing for approval to art director Alberto Gavasci.

Jeremiah said, “I was given complete creative latitude. It was a fantastic experience—it always is when people put their faith in you. Each cover was based on a photograph. It was nice because my drawings would help hide all the sins that a photograph might highlight. In 1987 when Stanley Abercrombie took over the editorship of Interior Design he inducted Jeremiah into it’s prestigious Hall of Fame.

How much was he paid for each cover? “First $50, and then it went up to I think $75, which at the time was pretty good. Eventually, my work got noticed by designers all over the country.”
Image: Cover of the month of November 1964 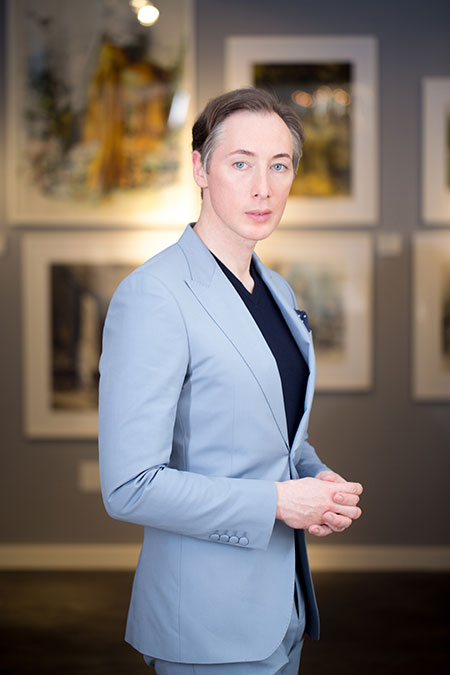 “In a digital age, Jeremiah reminded us what the hand could achieve before it was replaced by the eye of photography,”

“His paintings perpetuate the European tradition of producing precisely drawn records of rooms and their furnishings. It’s a genre that had its heyday before the advent of photography but remains relevant when practiced by a hand that has the skill to reveal something of the inner voice of a room.” “The resulting picture, while not always a documentary record of a room’s precise architecture and detail.”

A retrospective exhibition of 100 works by Jeremiah Goodman will be presented at The Gallery at 200 Lex runs from September 13th, 2018 until October 12th 2018. 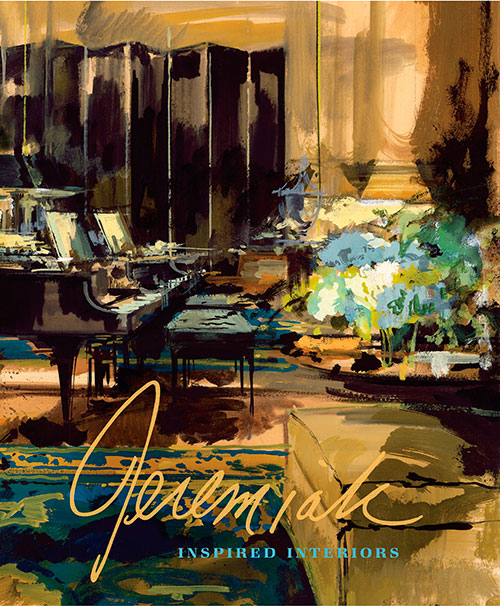 Inducted to the prestigious Interior Design Hall of Fame in 1987 Jeremiah Goodman has long been revered within the interior design community for his ability to infuse static rooms with warmth and personality. For almost seven decades his stylish and studied brushstrokes have chronicled the homes of powerbrokers in the upper reaches of the fashion and decorating worlds. Names like Bruce Weber, Carolina Herrera, Red Krakoff, and Tony Duquette populate a client list that reads like a page from Who’s Who.

Jeremiah: Inspired Interiors chronicles Goodman’s life and work, drawing on paintings and photographs taken from his own extensive archive. More than mere illustrations, his paintings interpret and inspire, conveying how a space is experienced through the eyes of an artist. Jeremiah can evoke a brocade-upholstered chair or a Baroque mirror with a few calligraphic brushstrokes that both describe and animate. Indeed, so evocative and full of particularized information are Jeremiah’s paintings that they form a unique record of the work of many of the great design personalities of the past half century. Simply put, Jeremiah’s work comprises the best record of America’s greatest interiors.