Extremely delicate work of restoration of Modestini, Senior Research Fellow and Paintings Conservator for the Samuel H. Kress Program at the Conservation Center of the Institute of Fine Arts, New York University.

Public presentation of the painting restored

“Salvator Mundi” (Savior of the World) a painting of Jesus Christ that, after centuries of neglect, has been identified as Leonardo da Vinci’s by New York art dealer and da Vinci expert Robert Simon.

Initially, Modestini and Simon thought it was a work attributed to Leonardo workshop. Only through restoration could it be identified as an original work of Leonardo da Vinci.

Up until now nobody knew of the existence of this 66 x 45 centimenter walnut panel oil painting whose distinguished features were laying dormant over layers of crude oil paint.

The King of England Charles I (1600-1649) owned the painting before it moved from one owner to another in private possessions until 2005, when its last owner brought this painting to Simon for studying it. The fact that it existed was known to Da Vinci’s followers, but experts believed that it had been destroyed.

When it finally landed on Modestini’s hands, she wasn’t even aware that the painting which she was holding, is the first painting of Da Vinci to have been discovered in a 100 years. The cost of the painting today is around $200 million as per some estimates.

Without knowing the truth of the painting, Miss Modestini kept removing the layers of the varnish painstakingly in her studio. As she did so, Simon studied the provenance of the painting carefully, while comparing it with other paintings of Da Vinci, and the truth revealed itself.

Firstly it was the so-called “pentimento” – it is an alteration of any painting which reveals traces of the previous work. Simon used a photo of the painting using night vision and examining it painstakingly led to the final discovery.

The other was the painting of Christ’s curls.

“I was looking at the curls and St. John the Baptist at the Louvre, who has this huge head of massive ringlets and they are exactly the same,” said Modestini.

Infrared reflectograms were used to check below the layers, and that’s when the thumb in the blessing hand was discovered. Also, the stole Christ is wearing is painted in different positions.

The various elements in the painting, and especially their positions, looked similar to Da Vinci’s way of depicting art. 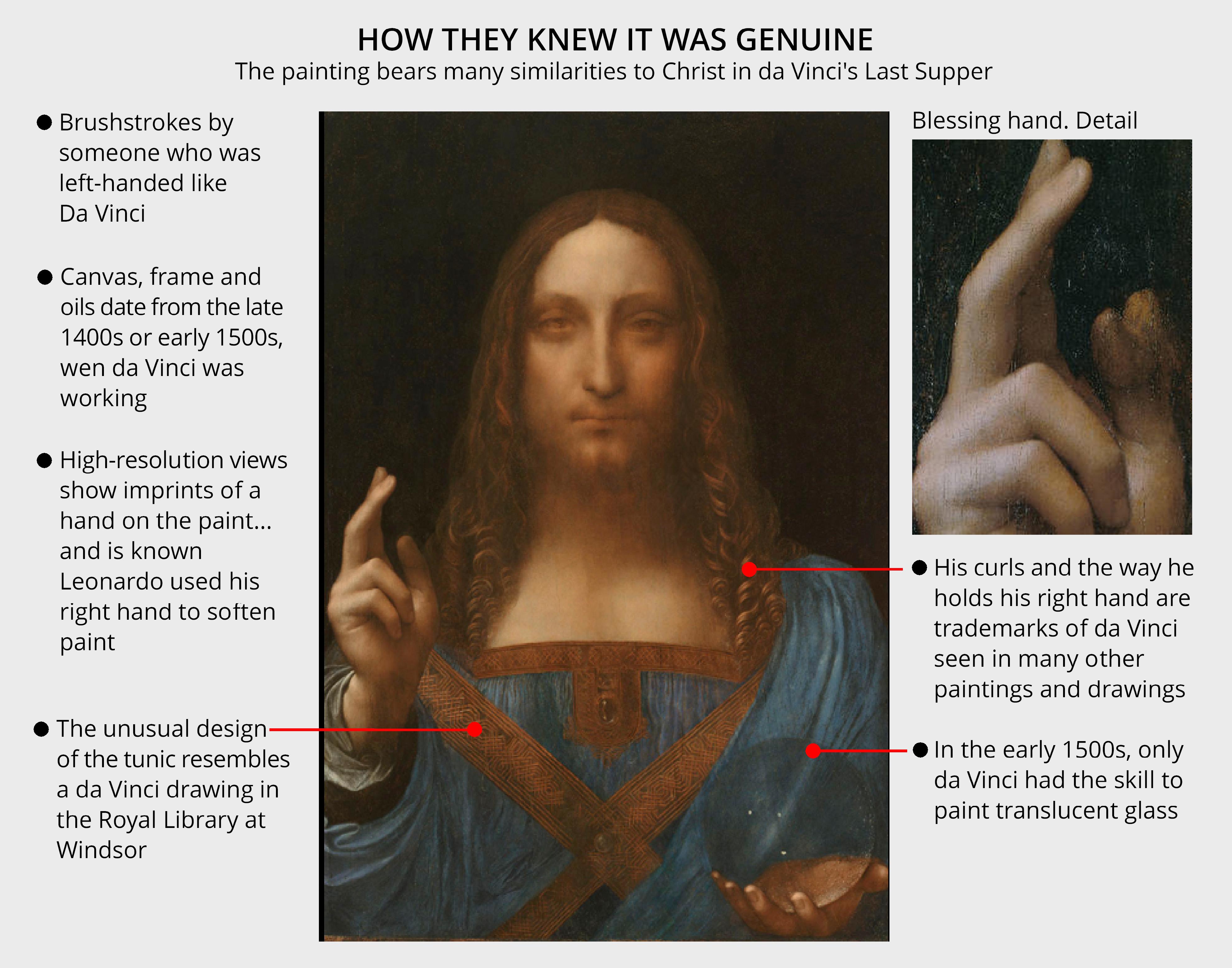 Modestini began cleaning the foggy varnish and the over-paint making use of solvents. On doing so, the painting’s true identity revealed itself. It took just a couple of hours in the first session, for Modestini to be able to see the work more clearly.

The next step was to take the cracked painting away and piece it back together again, a procedure that took about an year.

“It is quite a delicate process,” said Modestini. “It has to be very precise.”

Later in order to refine the lips and the eyes of Christ, she had to re touch the badly damaged areas.

The process was not only lengthy but also particularly difficult because, she said, she had “to make the decision of what to touch and what to leave alone.”

“I wanted (to be sure) that none of my restorations had impinged on the original, that I had not done too much, because old pictures have to look old — if you take out every crack, every spot, every anomaly, they can easily look like a reproduction,” she revelead.

Video of the exhibition “Leonardo da Vinci: Painter at the Court of Milan”

Ms. Dwyer Modestini received her B.A. in Art History from Barnard College, Columbia University in 1968 and in 1973 obtained an M.A. and Certificate of Advanced Study in Conservation from the State University of New York at Oneonta, Cooperstown Graduate Program under the direction of Caroline and Sheldon Keck. She holds a Certificate in decorative arts from the Accademia di Belle Arti in Florence, one in the conservation of mural paintings from the International Center for the Conservation of Cultural Property and the Istituto Centrale di Restauro in Rome where she studied in 1972 under the direction of Laura and Paolo Mora. After returning to the United States she worked on mural paintings in the New England area and served as a consultant to the SPNEA.

After an internship with Bernard Rabin at the Princeton Art Museum, Ms. Dwyer joined the staff of the Metropolitan Museum of Art in 1974 as assistant conservator. She worked under the direction of John Brealey and was appointed associate conservator in 1977 and full conservator in 1984. While at the Metropolitan Museum her principal responsibility was the restoration of the American paintings collection in preparation for the opening of the new American Wing in 1980 and worked closely with the curatorial department on many phases of the new paintings galleries and some of the period rooms. In addition she had the opportunity of conserving and restoring many other paintings of all schools and periods, responsibility for supervising fellows and interns, assistance in the administration of the department, as well as extensive work with loans and travelling exhibitions.

In 1987 she left the Metropolitan and set up a private practice in paintings conservation in New York. During this period she worked closely with her husband, Mario Modestini, widely acknowledged as one of the greatest restorers and connoisseurs of Italian painting of the past century, former Conservator and Curator of the Kress Foundation, and an expert in the restoration of gold ground paintings. Among their clients were The Frick Collection, The Toledo Museum of Art, the Berlin Museum, the art museums of San Francisco, New Orleans, Birmingham, Houston, Columbia, South Carolina and Allentown, Pennsylvania as well as the galleries of E.V. Thaw, William Acquavella, Agnews, Wildenstein, Bob P. Haboldt, Sotheby’s and the collection of the late Stavros Niarchos. A longtime fellow of the AIC, she has been consultant to the Pennsylvania Academy of Fine Arts and the Los Angeles County Museum, a member of the Empire State Plaza Art Commission, part of the Kress Commission that evaluated the restoration of the vault of the Sistine Chapel, and Curator and Conservator of Villa La Pietra in Florence. Presently she serves on the board of the Fondazione Roberto Longhi, Florence, is Conservation Consultant to The Samuel H. Kress Foundation and Senior Research Fellow and Paintings Conservator for the Samuel H. Kress Program at the Conservation Center of the Institute of Fine Arts, New York University where she teaches an advanced paintings class on the cleaning and retouching of old master paintings and a course on technical materials for connoisseurship for art history students.

Her publications include a study of John Kensett’s painting technique for the catalogue of the l984 exhibition, several articles written together with Mario Modestini on various aspects of Italian painting technique and restoration, a presentation on retouching published in the proceedings of the 2002 Yale Symposium, Early Italian Paintings: Approaches to Conservation, and an essay on the cleaning of paintings for the 2005 Journal of the Metropolitan Museum. The publication Studying and Conserving Paintings. Occasional Papers on the Samuel H. Kress Collection derived from examination and treatments performed in the Kress Program in Paintings Conservation and consists of papers by Mrs. Modestini and her former students and Fellows. For the past several years she has been working on a continuing project involving a memoir written by her late husband, Mario Modestini. She has lectured at AIC meetings, the Winterthur Art Conservation Program at the University of Delaware, the National Gallery of Art in Washington, the University of Florence and the Roberto Longhi Foundation in Florence. Under her direction the Kress Program at the Conservation Center has restored over a hundred and fifty paintings from Kress Regional Galleries and Study Collections across the country, conducted surveys and given public lectures.