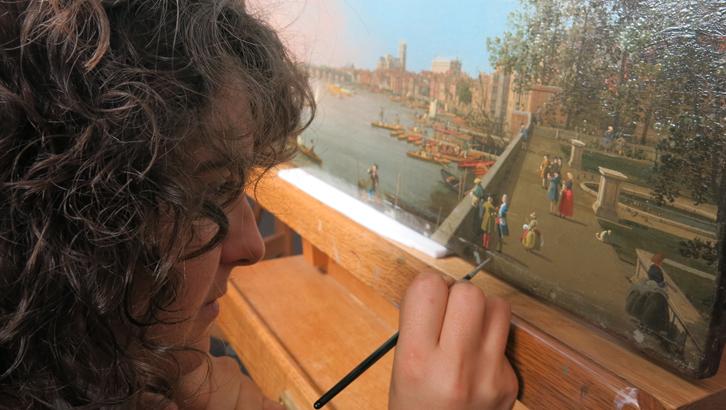 Over the last year Roxane Sperber, a FAIC/Kress Fellow in Painting Conservation at
the Yale Center for British Art, has intently studied six Canaletto paintings from
the Center’s collection and treated three for conservation.

These paintings represent Canaletto’s active years in London from 1746 to 1755, a period with little previous advanced technical research. Through her collaboration with the Technical Studies Lab at the Institute for the Preservation of Cultural Heritage (IPCH), Sperber and her colleague Dr. Jens Stenger discovered a previously unidentified pigment in Canaletto’s palette which has revealed a new understanding of Canaletto’s materials and practice during his stay in London.

The treatment of Old Walton Bridge presented a serious challenge as the sky had been heavily damaged from abrasion, most likely due to previous attempts at cleaning and varnish removal. The sky was moodier than typical of Canaletto’s work, which meant there was not a large basis for comparison. Sperber used drawings and photos from previous restoration attempts as references but was forced to trust her eye and judgment rather than follow a particular formula. The newly restored sky is decidedly less murky, and Canaletto’s subtle use of color and dynamic strokes are more clearly visible now.

In addition, several areas of paint loss needed to be completely reconstructed. Sperber stresses that in reconstructing areas of loss, she does not paint over the artist’s original work but restores the images, using fully reversible materials, to her best understanding of how the artist intended them to be seen. In these cases, using miniscule paint samples, Sperber worked with Stenger to determine the exact pigments that Canaletto used. The results from the lab showed that Canaletto introduced a blue pigment during his stay in England that had not been previously identified in his Venetian palette; a finding that surprised and excited Sperber.

The new pigment, blue verditer, replaced green earth pigments from Canaletto’s Venetian palette. Sperber explained that Canaletto was able to find a wide range of green earth colors in Venice ranging from deep forest greens to turquoise colors. He used these green-blue pigments to paint the water of the Venetian canals. When Canaletto moved from Venice, he was not able to acquire the same range of greens and began to use the blue verditer, sometimes mixed with yellows, to augment the duller green earth pigments available to him in England. These changes are notable as they challenge the common perception of Canaletto as a meticulous and formulaic painter who was adverse to change. Sperber and Stenger’s discovery speaks to Canaletto’s ability to adapt to new materials and a different environment. 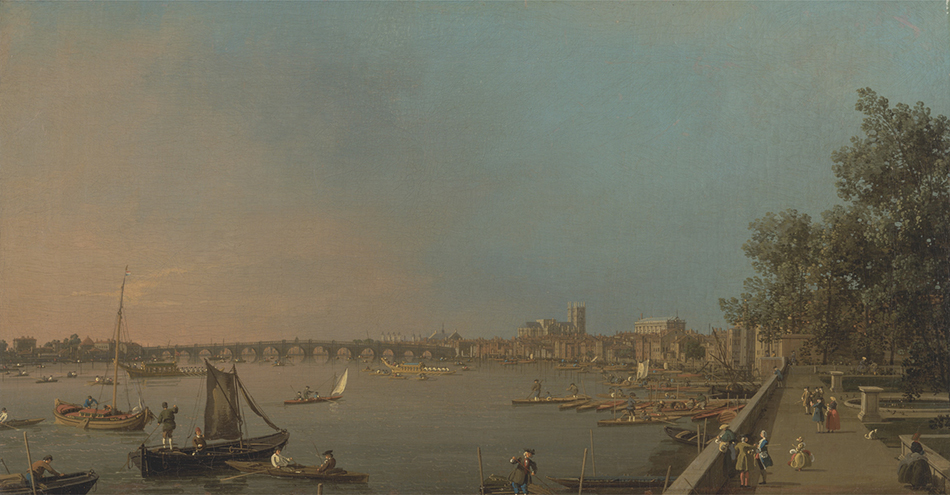 Canaletto.   Westminster from Near the Terrace of Somerset House

Working on Westminster from Near the Terrace of Somerset House presented an entirely different challenge, one that Sperber calls “an exercise in restraint.” Though it wasn’t in need of much retouching, the thick layer of varnish had severely discolored and cracked, making it hard to appreciate the texture and topography of the painting. Sperber pointed out that despite Canaletto’s detailed surfaces, he painted quite loosely, emphasizing movement and texture to enhance his subject matter. These details were lost under the aged varnish.

Wanting to maintain the “old master glow,” Sperber focused on removing the slightly yellowed, very shiny varnish, thinning it to the desired level rather than removing it completely. She then removed overpaint using carefully tailored solvent gels that she applied to selected areas—in this case, to difficult-to-remove previous retouching. These gels can be left on the surface for a set amount of time to swell the retouching without affecting the underlying paint. Finally, Sperber applied a new varnish over the painting and retouched the losses. Again, she relied heavily on her own eye and judgment to balance the image instead of following a prescribed formula. 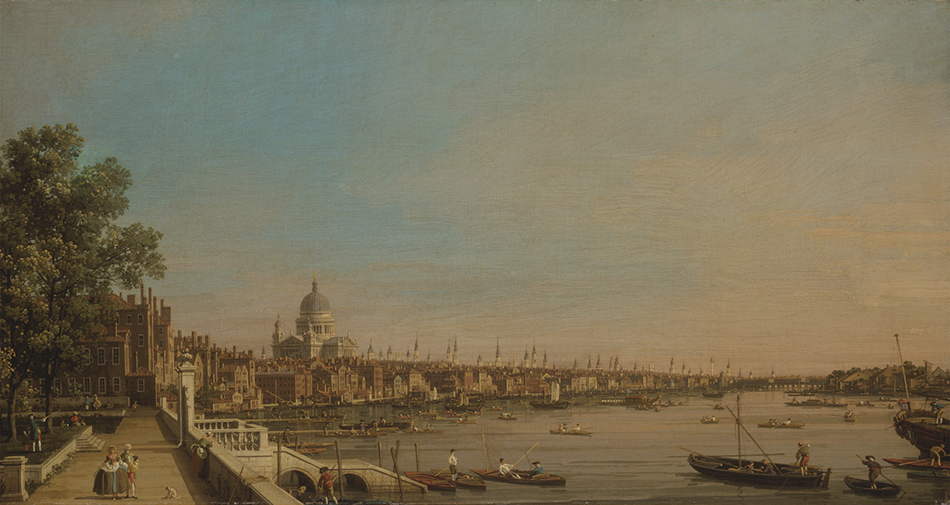 Canaletto. The City from Near the Terrace of Somerset House

The end goal for a paintings conservator is to restore the structural stability and readability of a painting, subtly manipulating the ravages of time so that the artist’s intentions can be more clearly appreciated. The finished restoration should not present a perfect rendition of the original work but a more unified version where damage does not detract from the art. Sperber’s study and treatment of Canaletto’s paintings, which brought together conservators, curators, historians, and scientists across Yale, achieved this goal while fortuitously shedding light on Canaletto’s time in England. The discovery of the new pigment points to Canaletto’s ability to adapt to his changing environment and implies that at his core, Canaletto was an artist who welcomed a challenge. Sperber and Stenger plan to publish a paper about their findings in the near future.