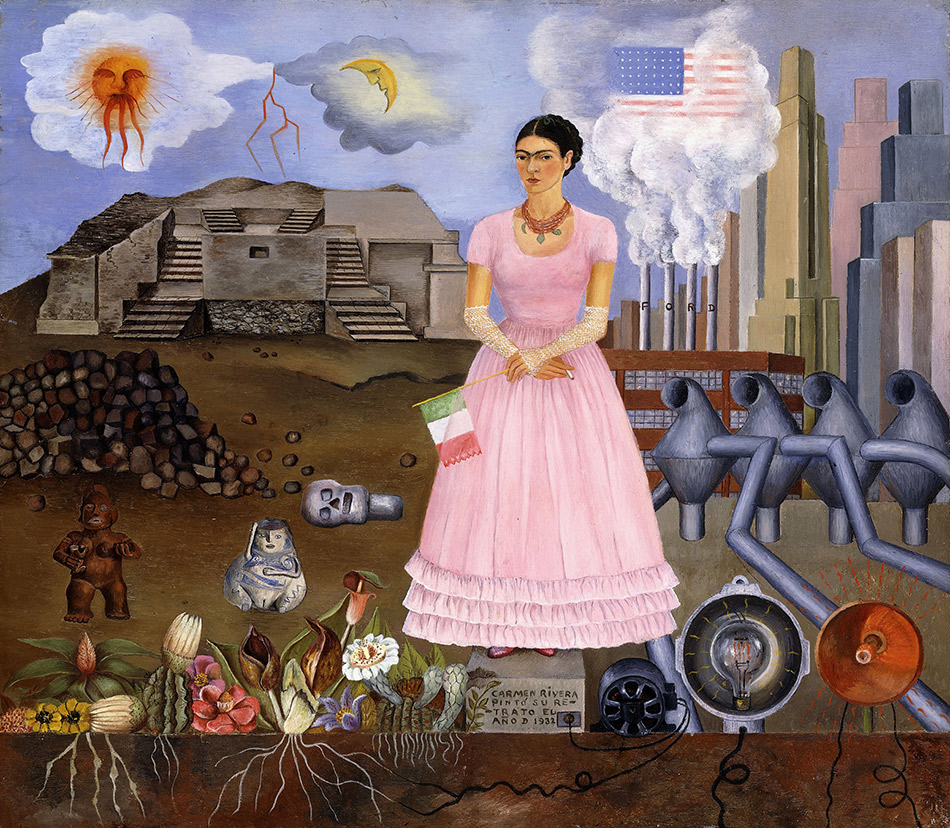 An exhibition that charts the development of Modern art in Mexico and the social, political, and cultural forces that shaped it over the course of nearly half a century, including easel paintings, large-scale portable murals and mural fragments, prints, photographs, books, newspapers, and broadsheet. Paint the Revolution is unprecedented for its breadth and the variety of visual materials on display. 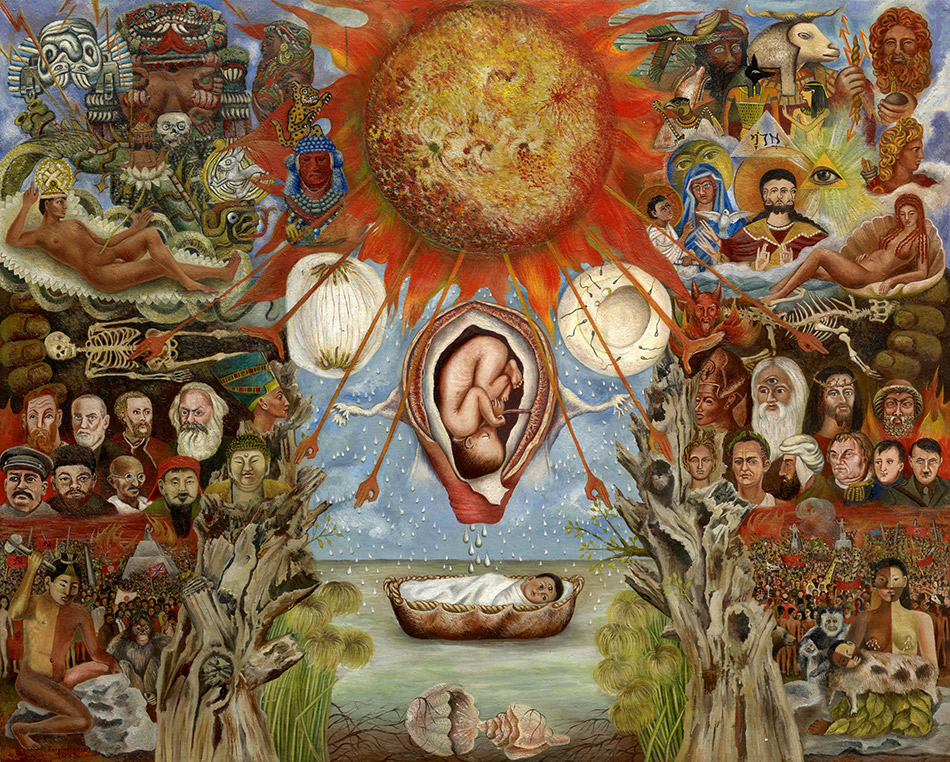 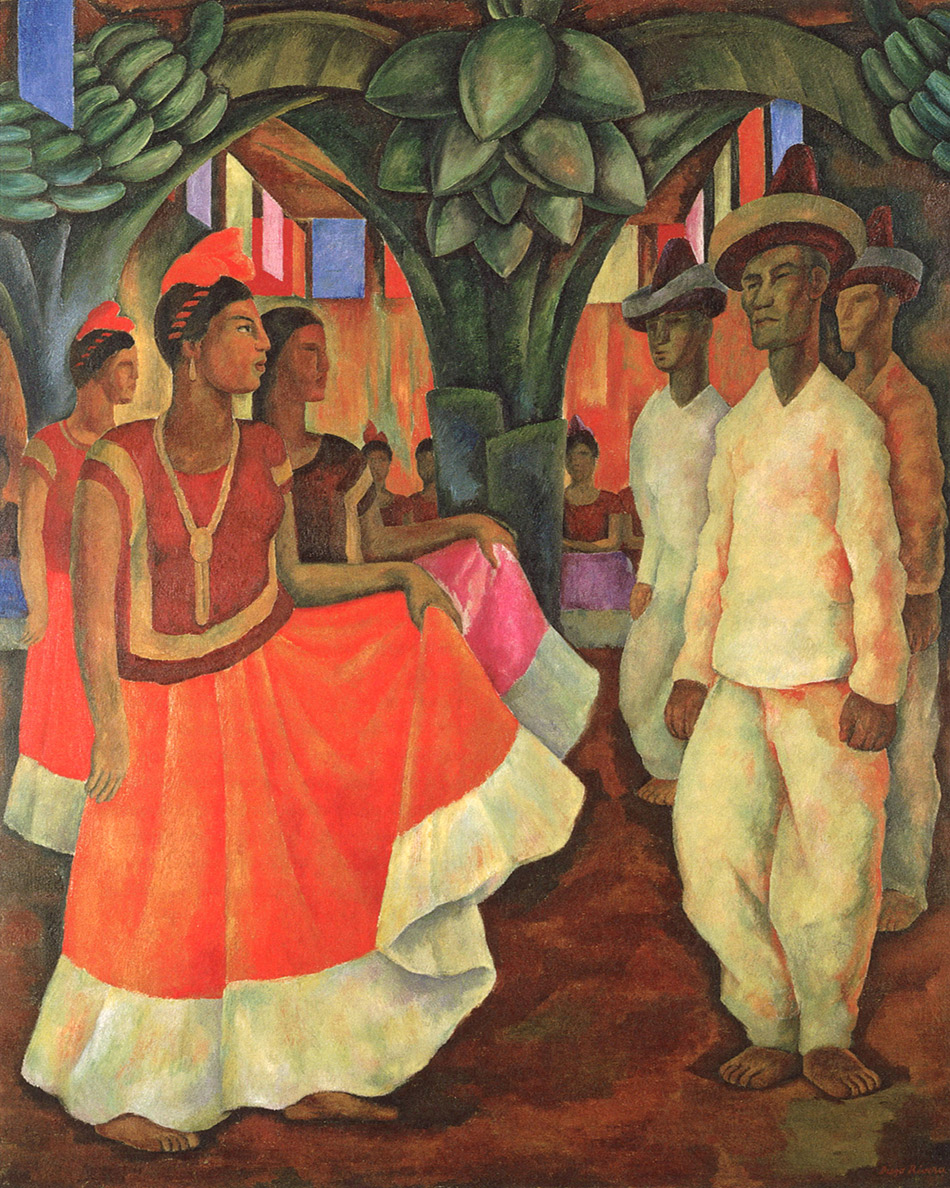 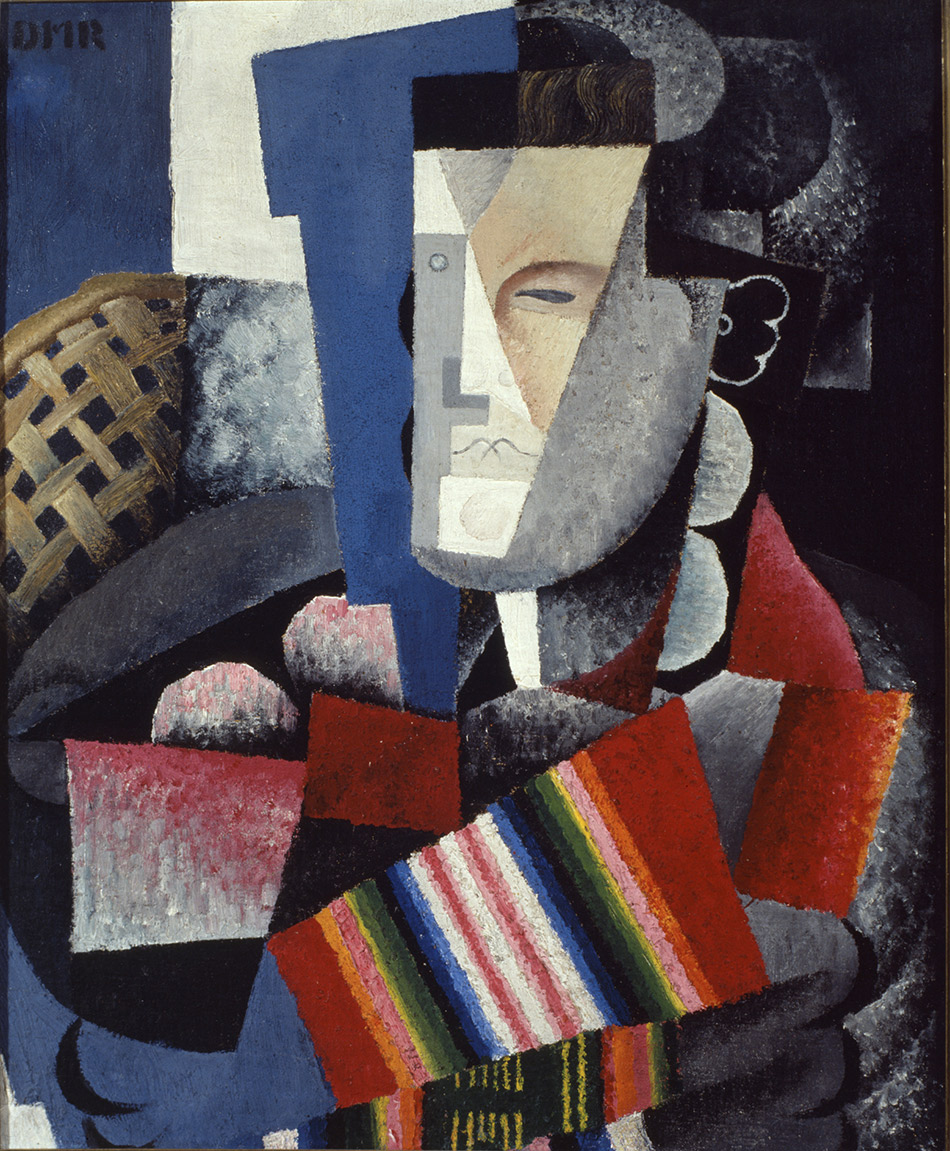 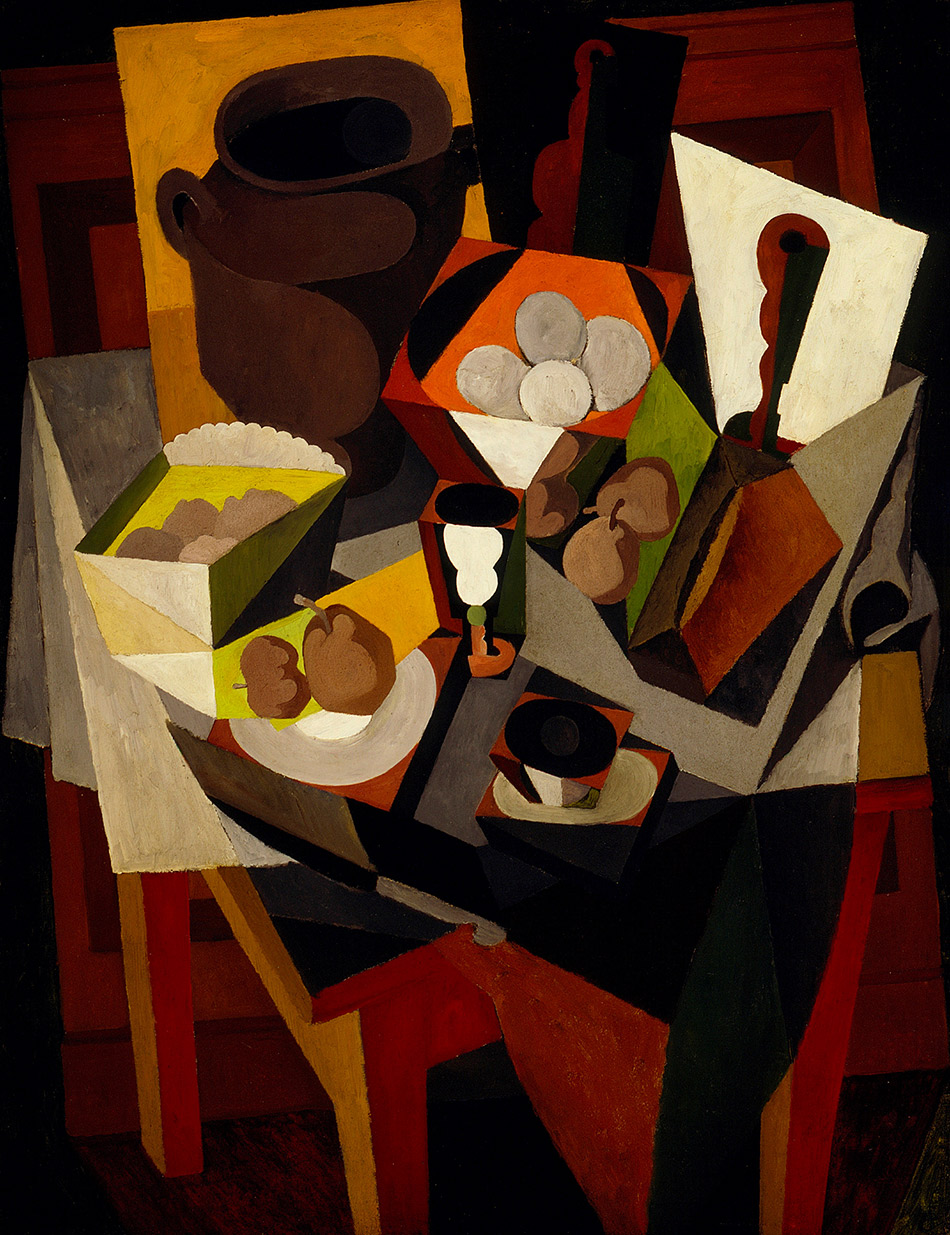 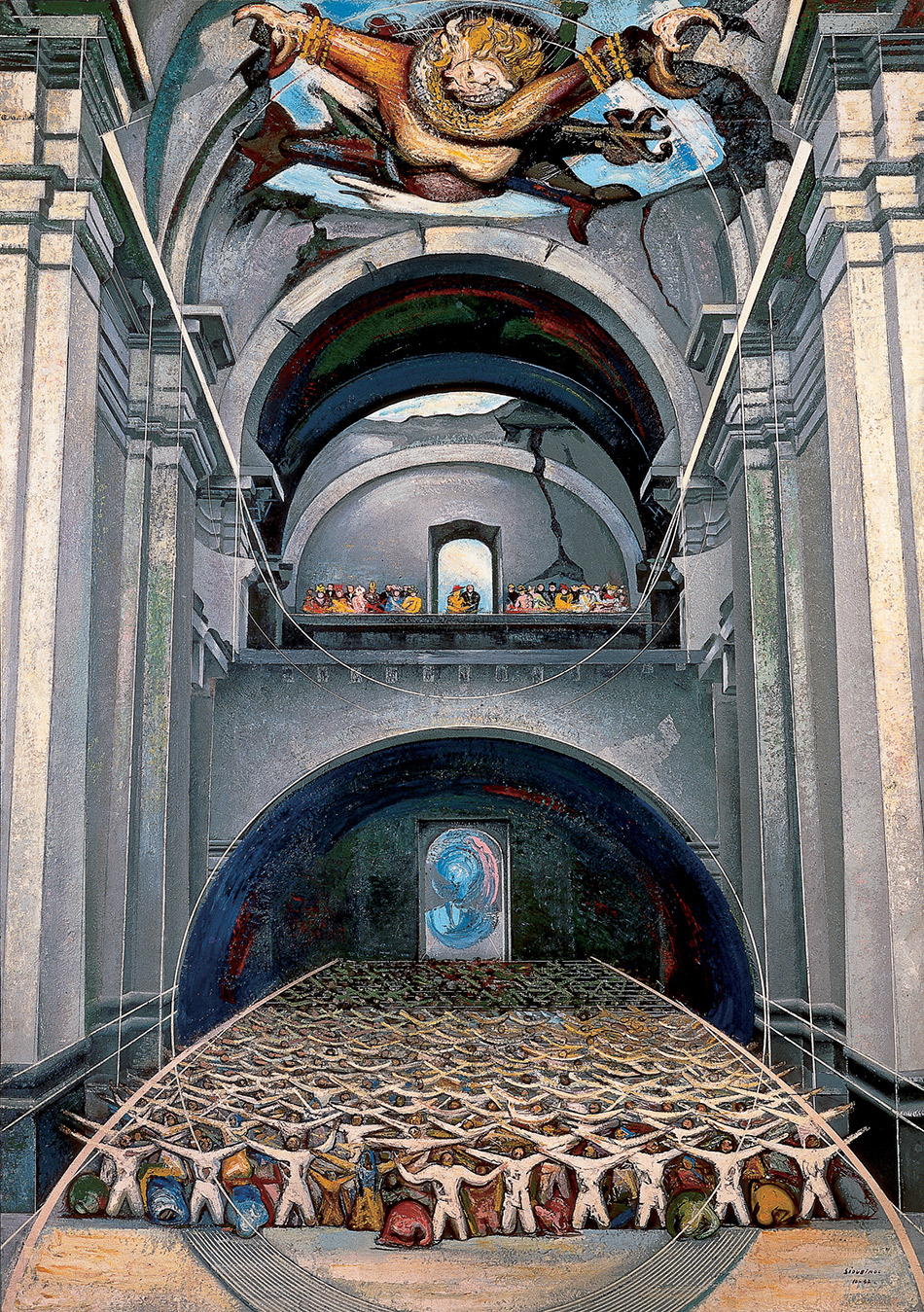 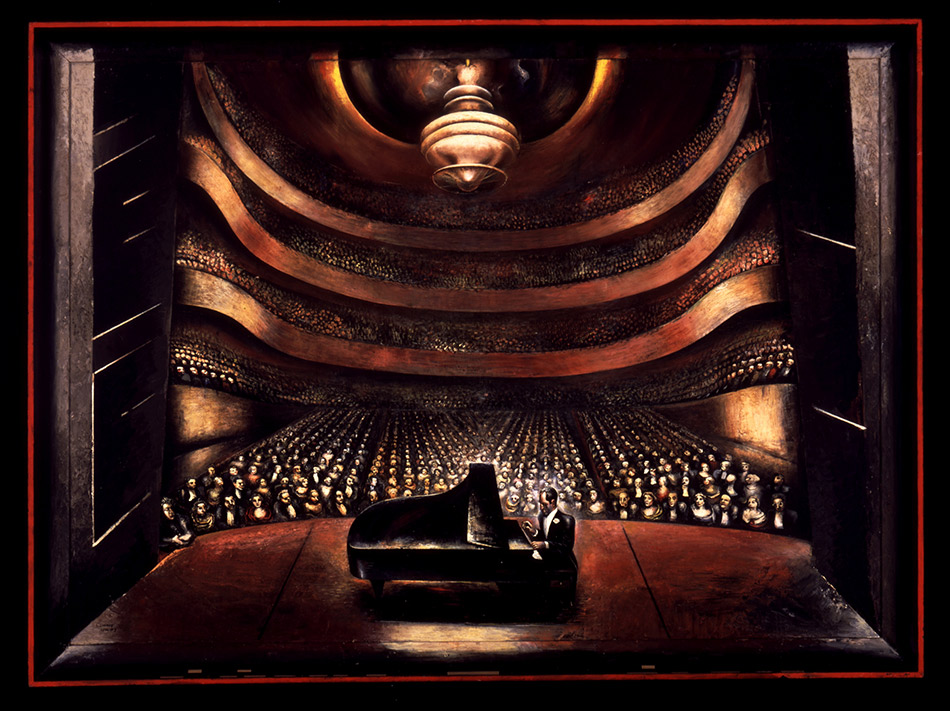 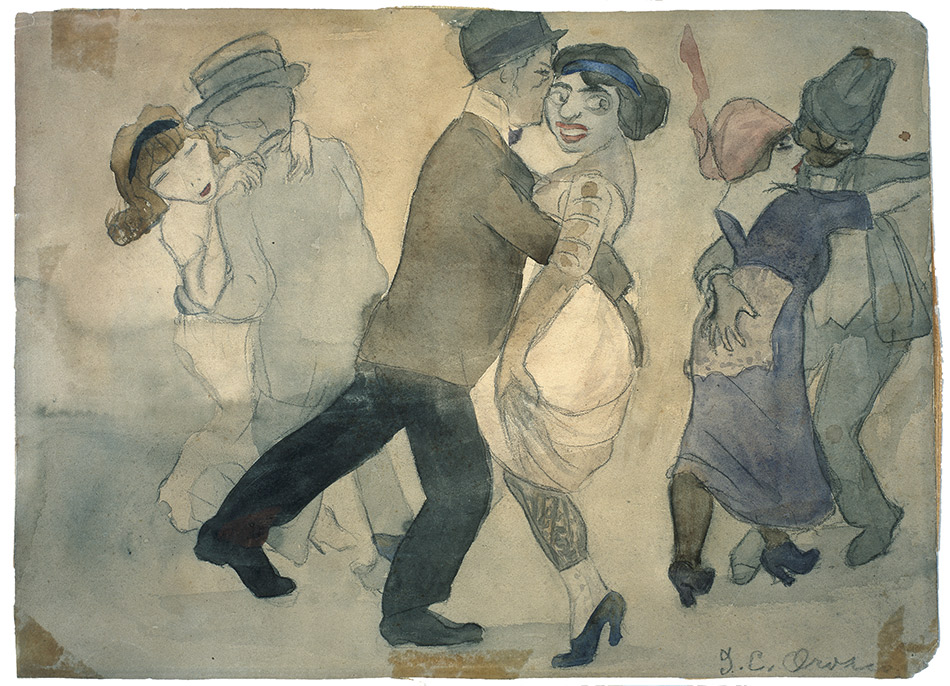 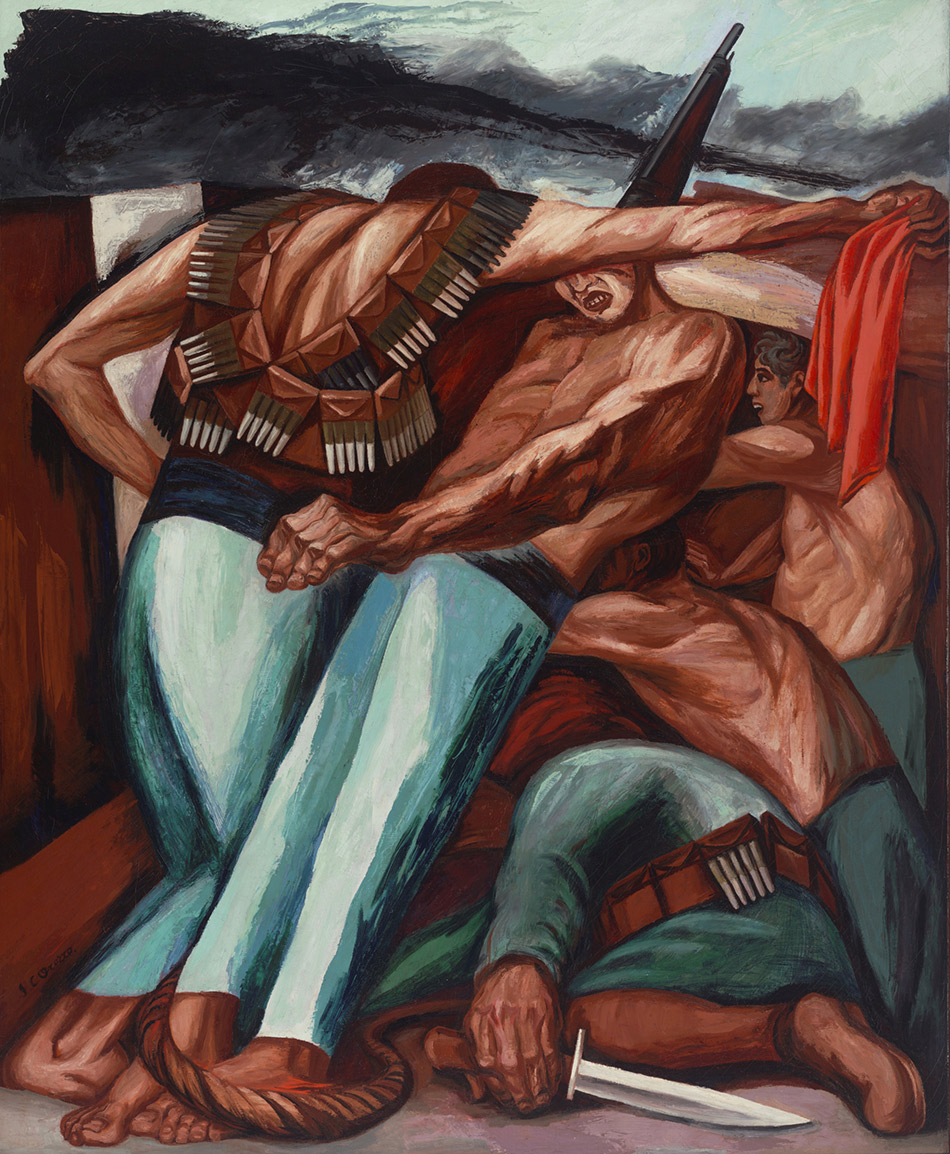 
Beside “the three great ones” -Orozco, Rivera and Siqueiros- the exhibition presents other important contemporaries such as Dr. Atl (Gerardo Murillo), Manuel Álvarez Bravo, Miguel Covarrubias, Alfredo Ramos Martínez, Carlos Mérida, and Roberto Montenegro, among others. In addition, three historical murals by los tres grandes (“the three great ones”) are digitally re-created and projected in the galleries. 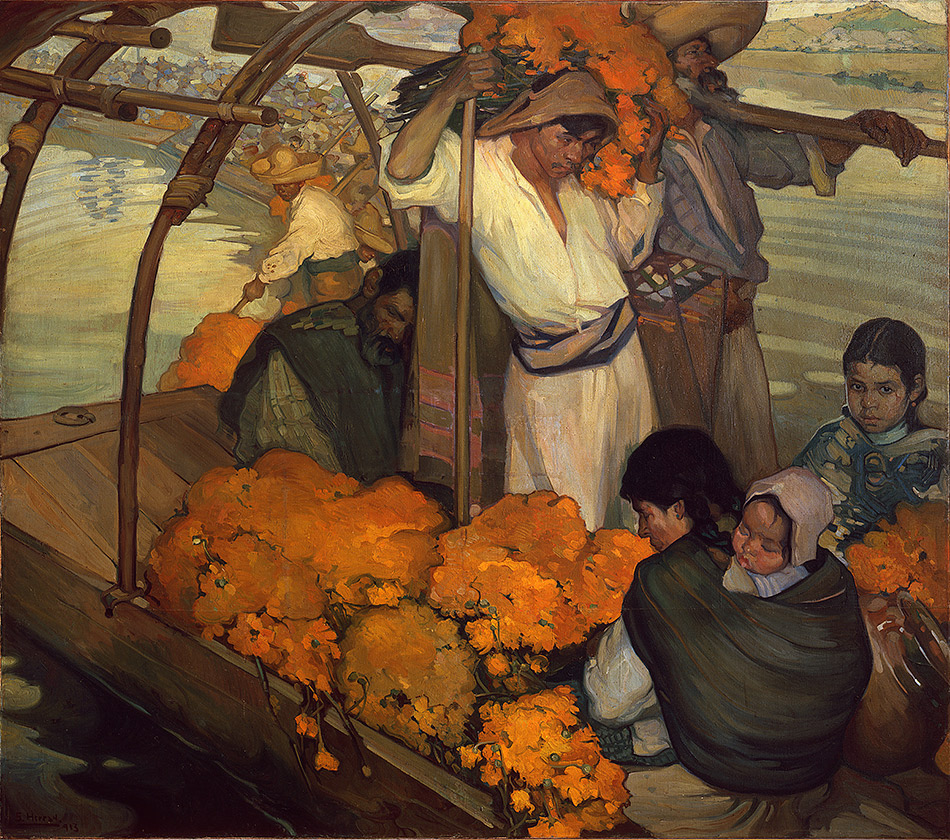 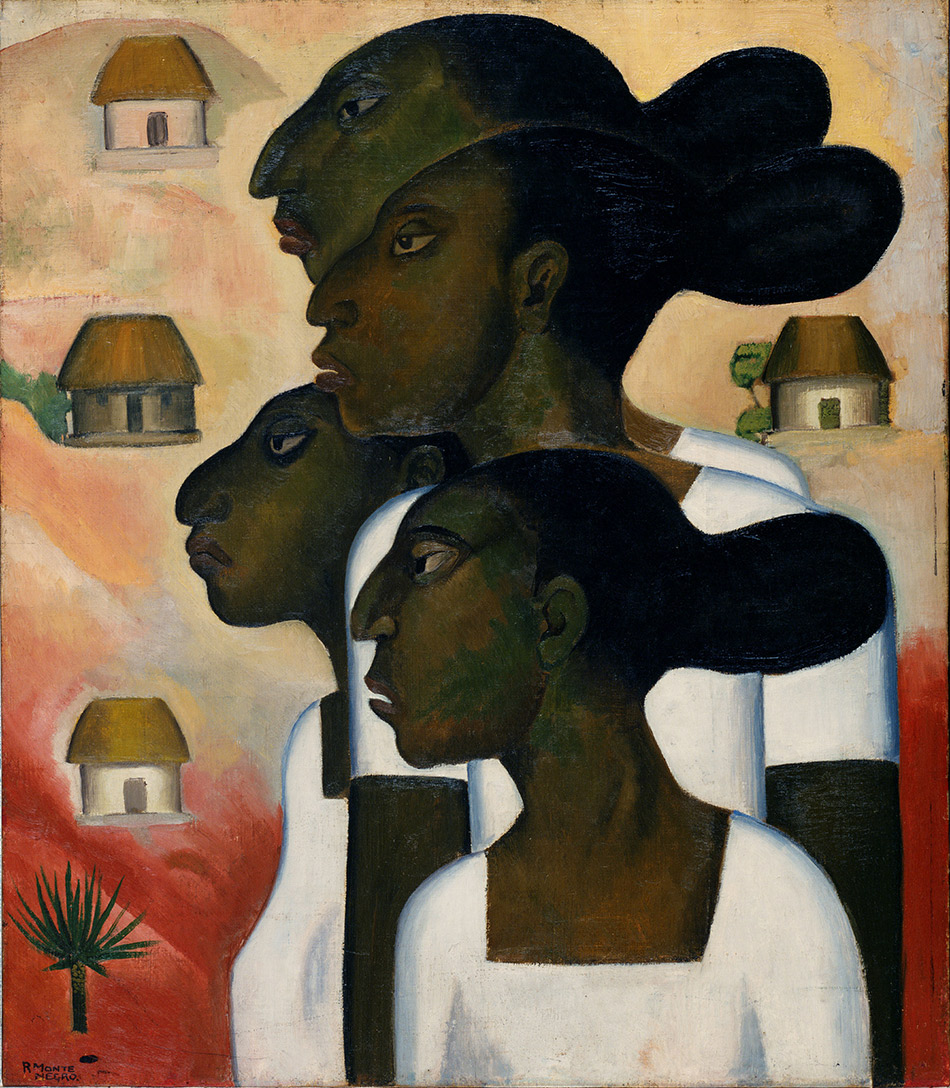 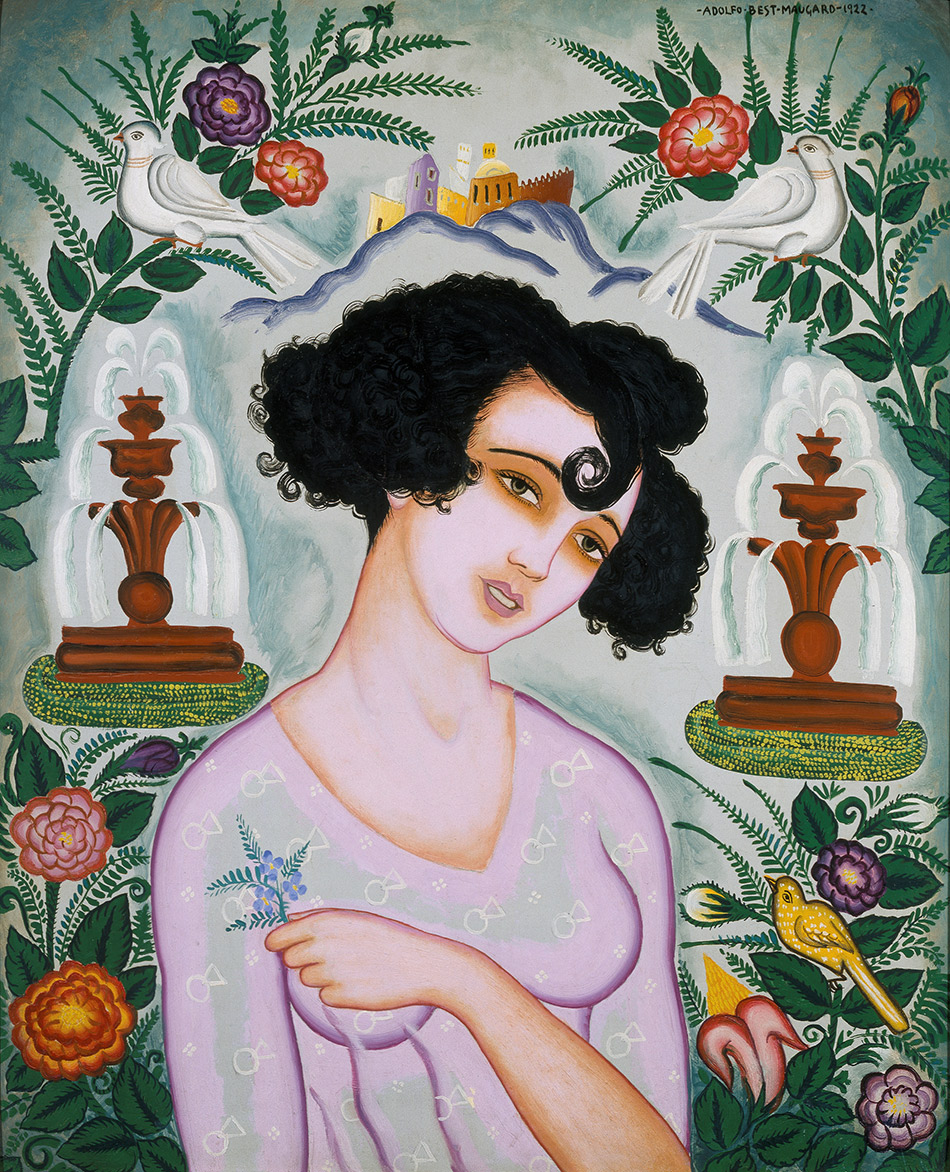 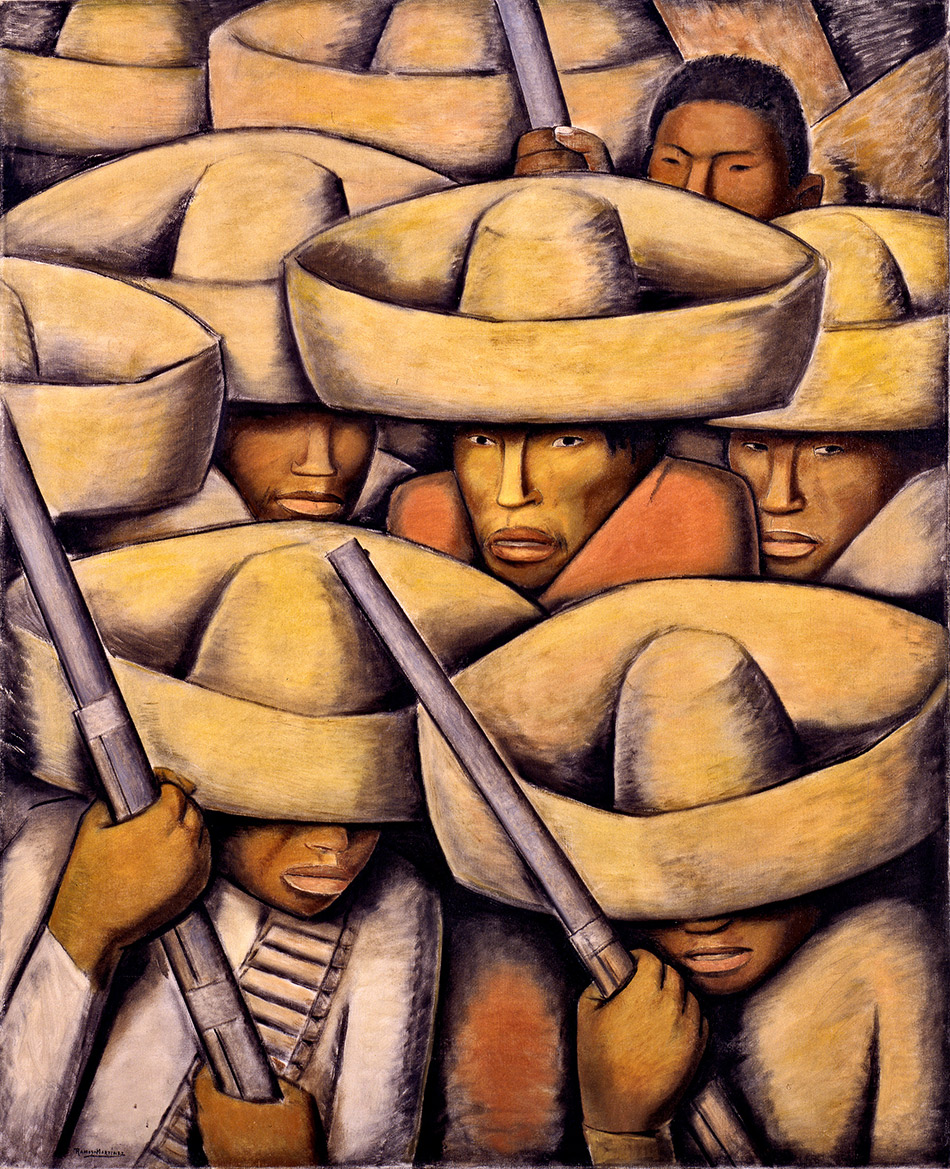 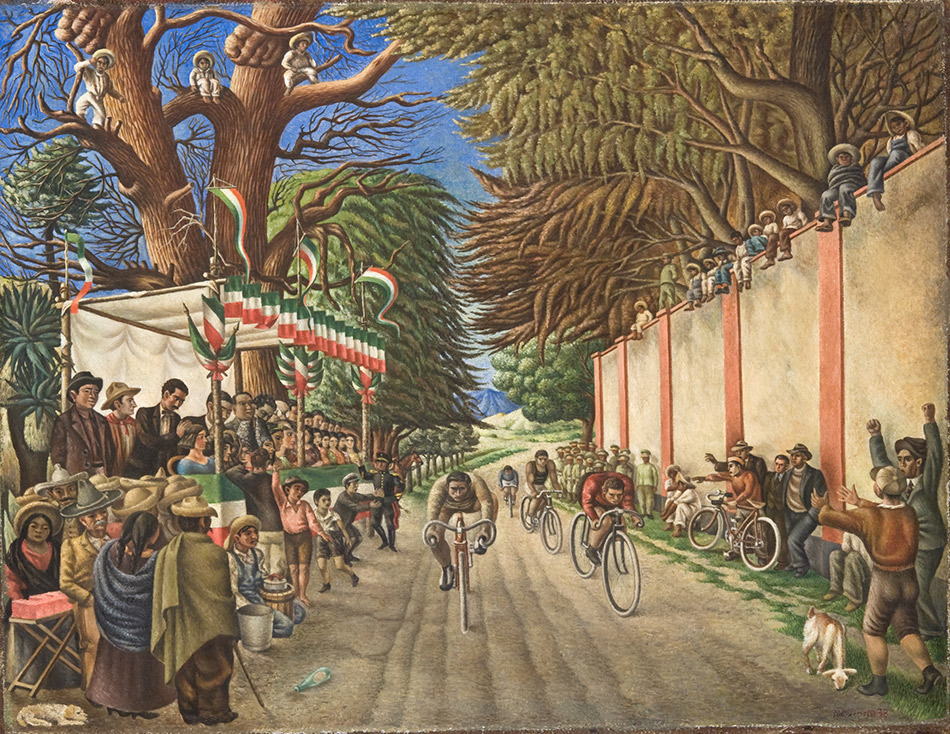 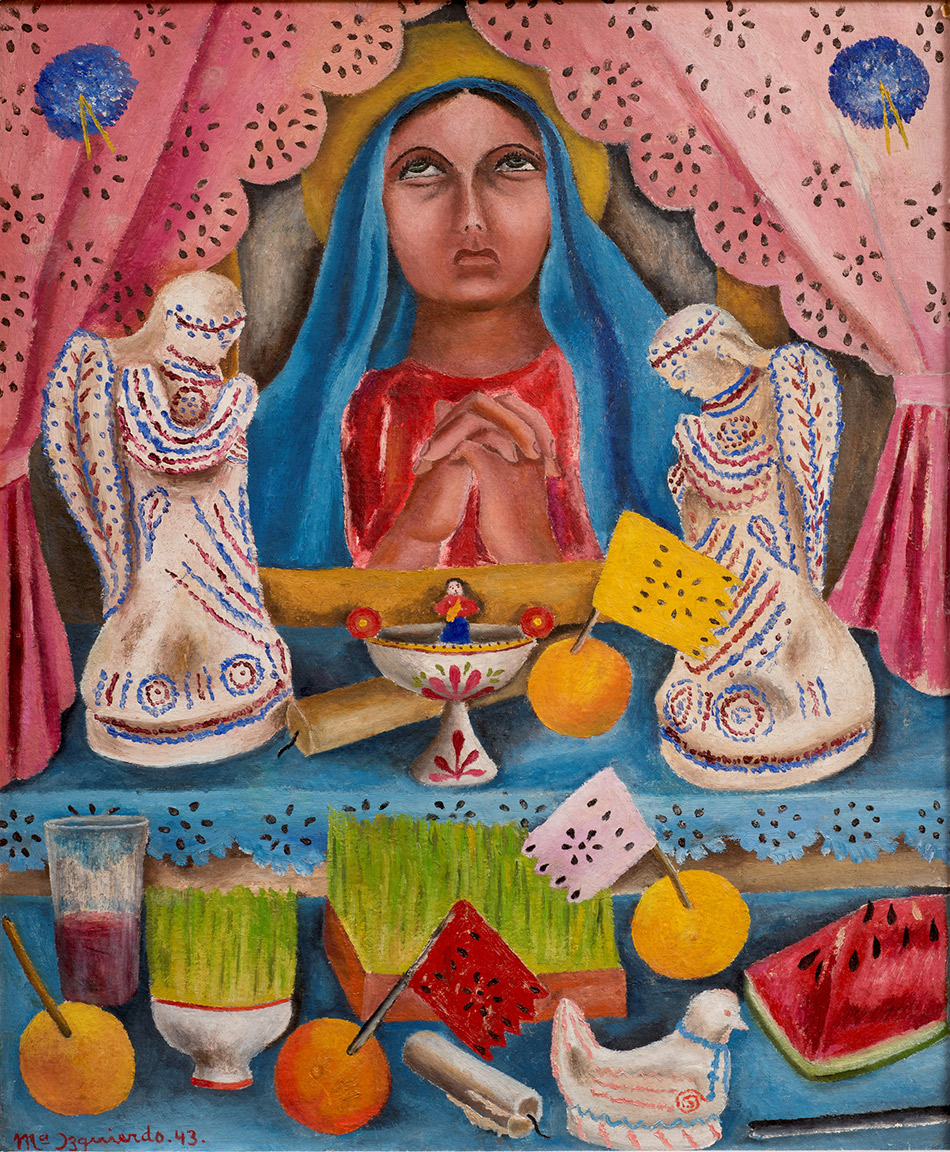 María Izquierdo, “Our Lady of Sorrows”, 1943, oil on board, private collection. 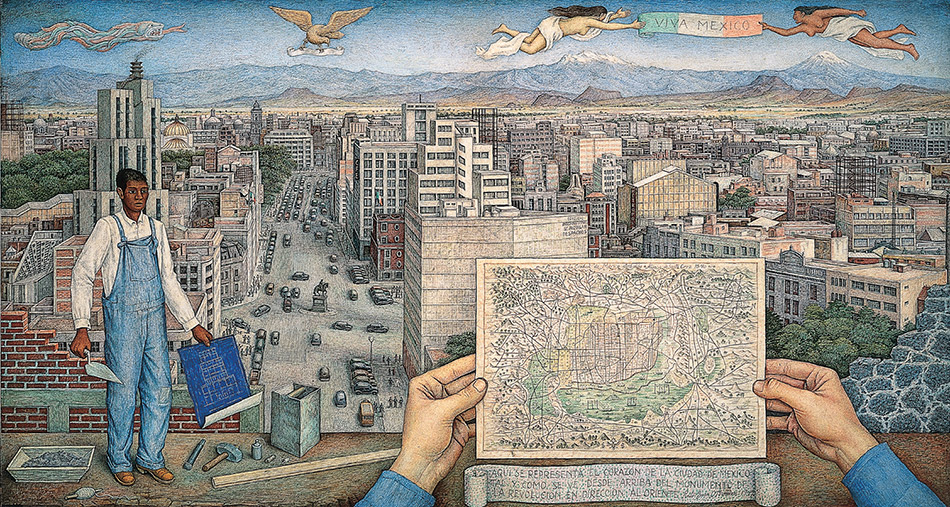 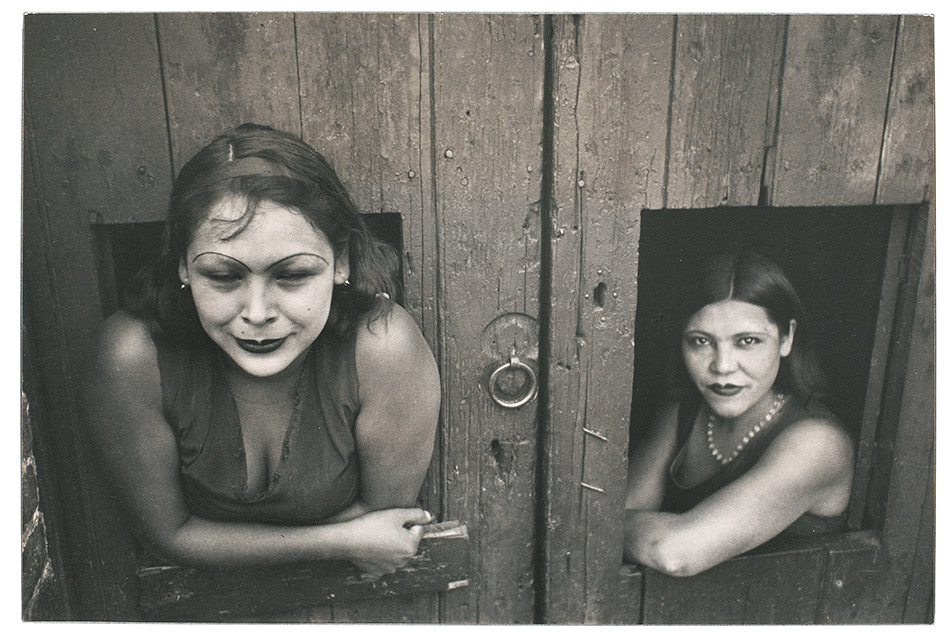 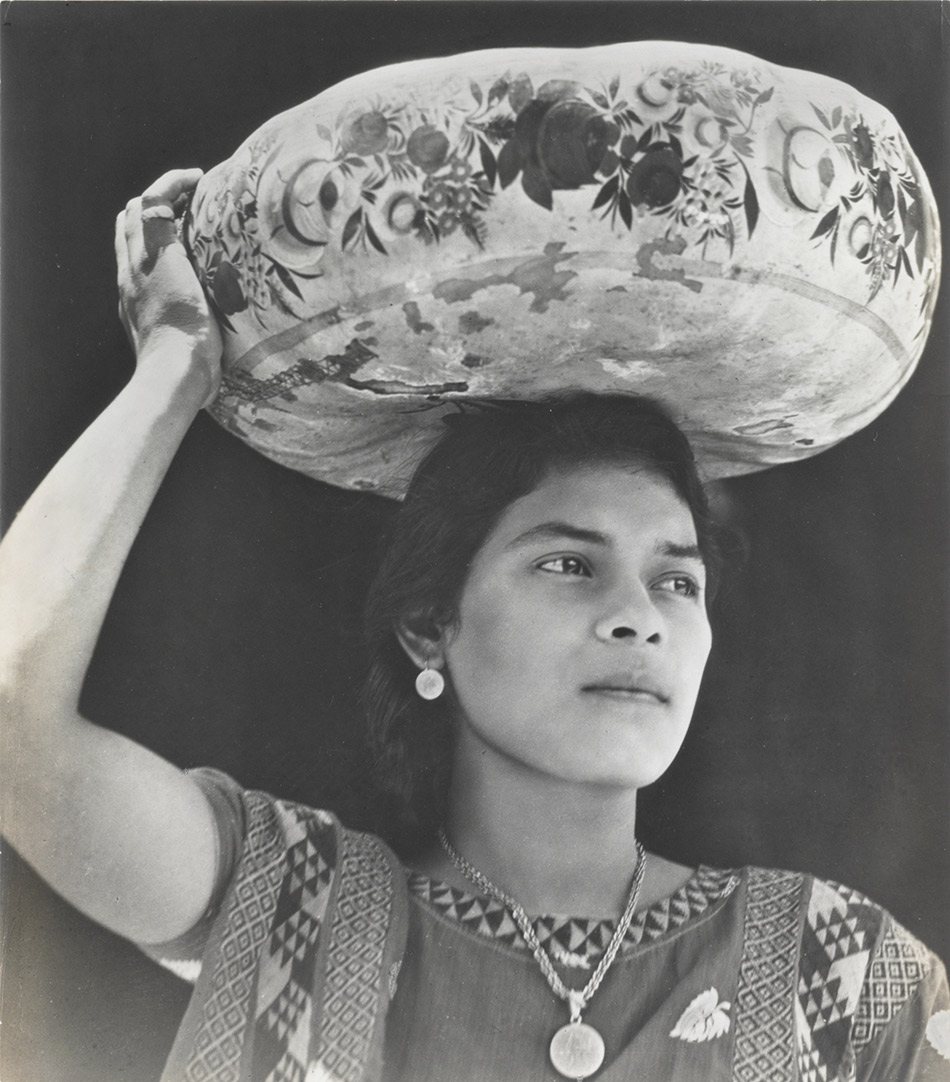 The exhibition opens with a group of works created in Mexico City during the revolutionary decade of the 1910s. While acknowledging international art movements such as Impressionism, Symbolism, and Cubism, artists at the time were increasingly interested in articulating a distinctly Mexican aesthetic—known as “mexicanidad”—in their work. Paintings such as Saturnino Herrán’s The Offering (1913), featuring a boatload of orange marigolds on its way to market for Day of the Dead offerings, reflect the desire to infuse art with symbols of national identity and traditions unique to Mexico.

The context in which Mexican artists worked took a radical turn in the 1920s. A new government, led by President Álvaro Obregón, sought to unify citizens through public education and the arts, favoring the medium of mural painting in particular for its architectural, monumental, and communal qualities. Key works in the exhibition are supplemented by large-scale digital representations of three historic public murals: Rivera’s Ballad of the Agrarian and Proletarian Revolution (1928–29), on view at the Secretariat of Education in Mexico City; Orozco’s Epic of American Civilization (1939–40), on view at Dartmouth College in Hanover, New Hampshire; and Siqueiros’s Portrait of the Bourgeoisie (1939–40), painted for the electrician’s union headquarters in Mexico City.

The exhibition also highlights the effort of the Education Ministry to democratize culture, led by painter Adolfo Best Maugard (1891–1964), who established a drawing system for use in primary schools across Mexico City. Maugard’s influence is reflected in works by artists such as Abraham Ángel (1905–1924), Julio Castellanos (1905–1947), and Rufino Tamayo (1898–1991), who engaged with this educational project at a young age. Similarly, works created by young Modernists like Ramón Alva de la Canal (1892–1985), Manuel Rodríguez Lozano (1896–1971), and Leopoldo Méndez (1902–1969), who studied at Escuelas de Pintura al Aire Libre (Open-Air Painting Schools), are presented.

At the same time, in the 1920s, two groups of avant-garde artists emerged: the Estridentistas and the Contemporáneos. Attuned to international trends in painting, these groups rejected historical and traditional subjects in favor of cosmopolitan themes and scenes of everyday modern life. Images of cities, factories, and trains by Juan O’Gorman (1905–1982) and Rufino Tamayo; café scenes by Ramón Alva de la Canal; and a selection of photographs by Emilio Amero (1901–1976), Manuel Álvarez Bravo (1902–2002), and Augustín Jiménez (1901–1974), among others, reflect this urban focus.

In the 1920s and 1930s, an emerging market for Mexican art in the United States drew painters like Frida Kahlo, José Clemente Orozco, and Diego Rivera northward. This section of the exhibition examines works generated by these prominent artists during multiyear sojourns in the United States. Often dramatizing the relationship between Hispano- and Anglo-America, these artists relied on imagery from both countries to tell a complete narrative of the continent’s history. Highlights include Kahlo’s Self-Portrait on the Border Line Between Mexico and the United States (1932); and Alfredo Ramos Martínez’s Pottery Vendors (1934), featuring representations of Mexican women drawn directly onto the beauty column of the Los Angeles Times.

In Times of War

Finally, the exhibition explores the resurgence of politically and socially charged art from the mid-1930s to the 1950s, as both national and international events continued to influence Mexican culture. As Mexican politics took a socialist turn, the end of the Spanish Civil War and World War II brought a number of exiled European artists to Mexico. Works in this section include Siqueiros’s War (1939), painted by the artist following his return from Spain, where he fought against the Fascists; and a selection of works by exiled artists of the Surrealist movement such as Wolfgang Paalen and Alice Rahon. 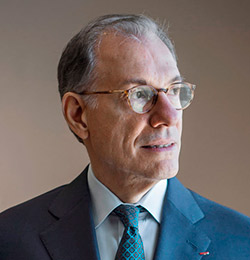 Gary Tinterow
Director of the Museum of Fine Arts, Houston

“While some of the artists represented in Paint the Revolution may be familiar to visitors, many of the names and images will be new to Houston audiences. We are grateful to our colleagues at the Philadelphia Museum of Art and the Museo del Palacio de Bellas Artes for making this exhibition possible, and we are thrilled to offer visitors the opportunity to examine firsthand the emergence of Mexico as a center of Modern art,” 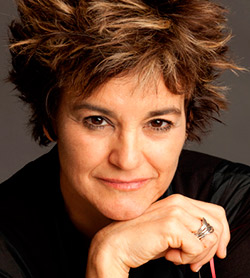 Mari Carmen Ramírez
The Wortham Curator of Latin American Art at the MFAH
and organizing curator of the Houston presentation.

“Scholars have long understood Diego Rivera, José Clemente Orozco, and David Alfaro Siqueiros as the driving forces behind muralism and the transformations that swept Mexican art after the Revolution,”  “Paint the Revolution, however, exposes audiences to the lesser-known forms of expression—from printmaking to photography—employed by a broad range of Mexican artists as they reacted to the social and political changes in Mexico during the first half of the 20th century.” 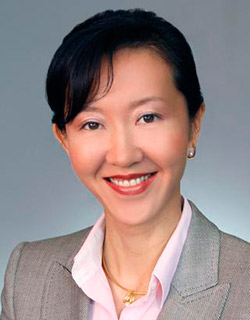 “Bank of America is thrilled to sponsor and help bring Paint the Revolution to Houston,” “We share with the MFAH its mission of making art accessible to all. What better way to draw people of all backgrounds than with these masterpieces from some of Mexico’s most acclaimed artists. We believe that art matters. The arts help individuals connect with each other and across cultures. This exhibition is sure to be an enlightening part of Houston’s rich and diverse arts scene.” 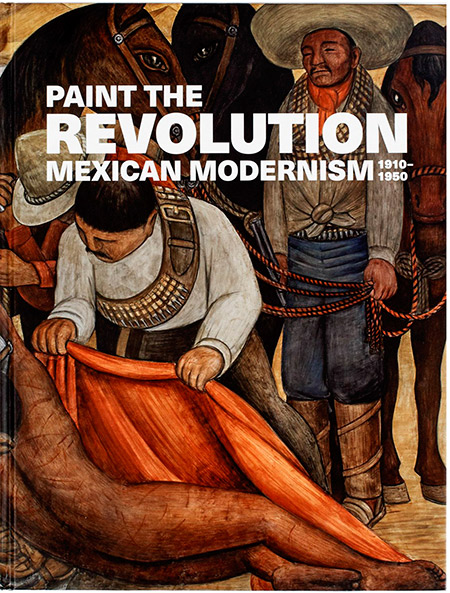 A comprehensive look at four transformative decades that put Mexico’s modern art on the map.

In the wake of the 1910–20 Revolution, Mexico emerged as a center of modern art, closely watched around the world. Highlighted are the achievements of the Tres grandes (three greats)—José Clemente Orozco, Diego Rivera, and David Alfaro Siqueiros—and other renowned figures such as Rufino Tamayo and Frida Kahlo, but the book goes beyond these well-known names to present a fuller picture of the period from 1910 to 1950.

Fourteen essays by authors from both the United States and Mexico offer a thorough reassessment of Mexican modernism from multiple perspectives. Some of the texts delve into thematic topics—developments in mural painting, the role of the government in the arts, intersections between modern art and cinema, and the impact of Mexican art in the United States—while others explore specific modernist genres—such as printmaking, photography, and architecture. This beautifully illustrated book offers a comprehensive look at the period that brought Mexico onto the world stage during a period of political upheaval and dramatic social change. 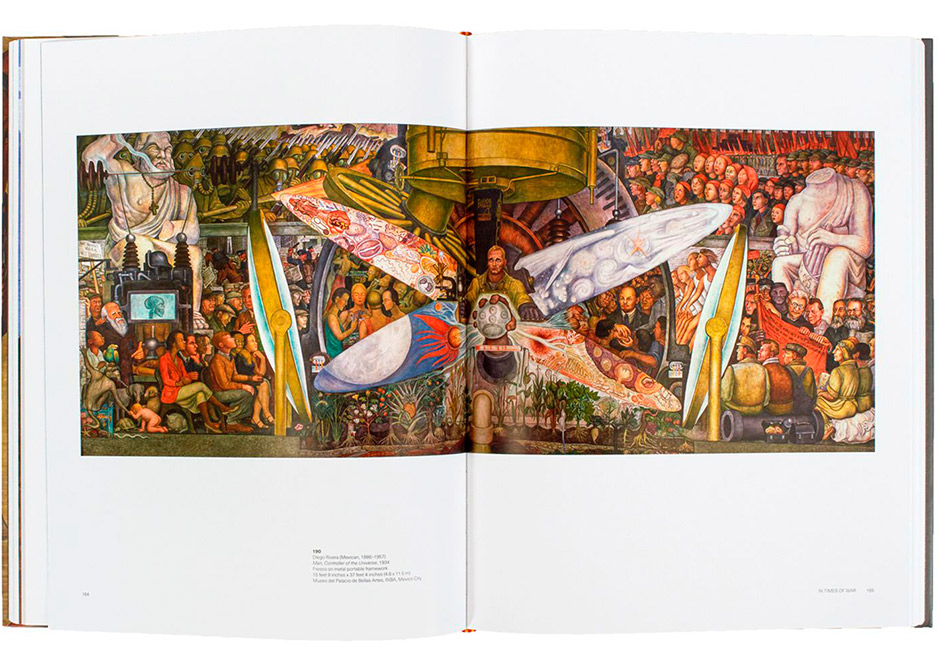 The accompanying catalogue in English and Spanish is made possible by the Mary Street Jenkins Foundation. The English language edition is additionally supported by the Davenport Family Foundation, The Andrew W. Mellon Fund for Scholarly Publications at the Philadelphia Museum of Art, and by Furthermore: a program of the J.M. Kaplan Fund.

Organizers
This exhibition was originated by the Philadelphia Museum of Art and the Museo del Palacio de Bellas Artes, Mexico City. The presentation in Houston was organized by the Museum of Fine Arts, Houston. 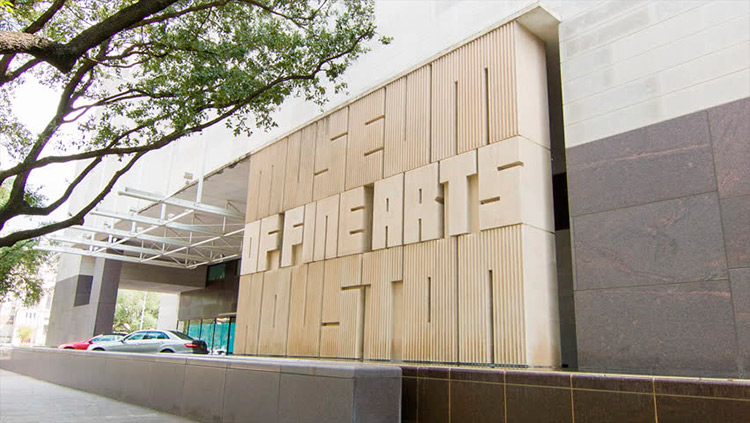