February 3 through May 27, 2018
The MINNEAPOLIS INSTITUTE OF ART 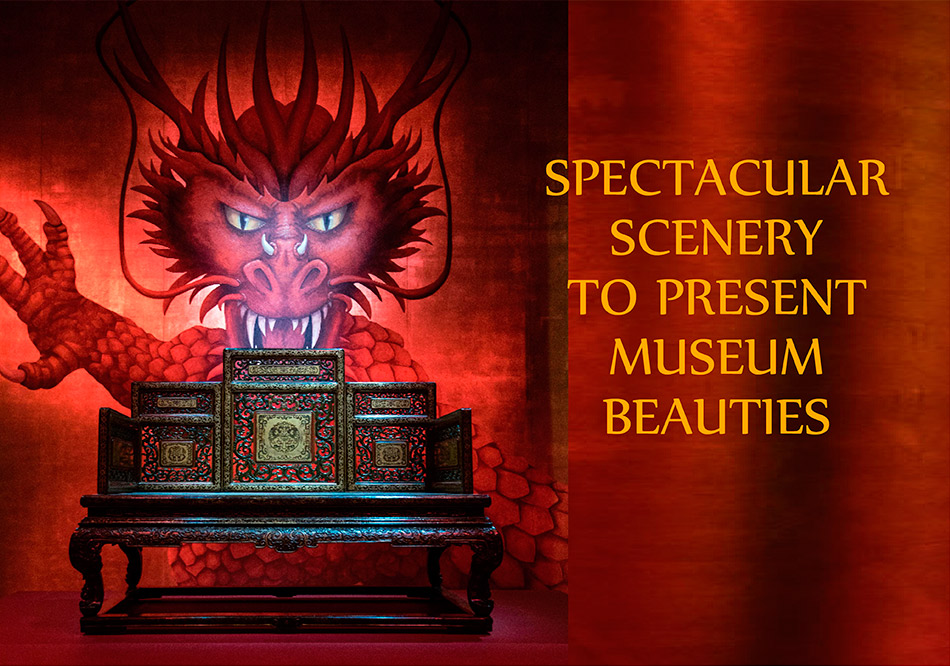 Famous theater director and visual artist Robert Wilson has created an immersive
and experiential environment to showcase the famous Chinese art collection of the
Minneapolis Institute of Art (Mia)  Scenographies and effective uses of light on works of art
show the opulence of the Qing Empire, the last imperial dynasty of China.

The exhibition shows through ten galleries from the outer world of the imperial court to the emperor’s inner and intimate world. Each gallery also features sound effects created in collaboration with sound designer Rodrigo Gava, and dramatic lighting by designer A. J. Weissbard. 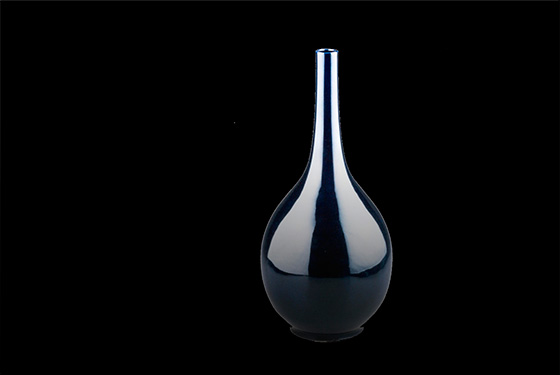 Power and Beauty begins in a dark room containing a single, illuminated object: a black glazed porcelain vase, manufactured at the royal Qing kiln. In ancient Chinese philosophy, darkness is considered complementary to brightness. Light and dark are physical manifestations of yin and yang, the duality at the heart of most classical Chinese science and philosophy.

Emptiness gives way to abundance and dark gives way to light to create an immediate and heady contrast. In this gallery, a display of more than wo hundred works in various media conjures the emperors’ insatiable appetite for art. At the empire’s peak in the 1700s, there was unprecedented prosperity and political stability, which allowed the decorative arts to flourish. The Forbidden City in Beijing, where the emperor’s court was based, became a center of artistic production, and the emperors commissioned workshops to create opulent objects for their palaces. A joyful song from Puccini’s opera Turandot, which is set in China, serves as the soundscape, further strengthening the festival-like atmosphere of the gallery. 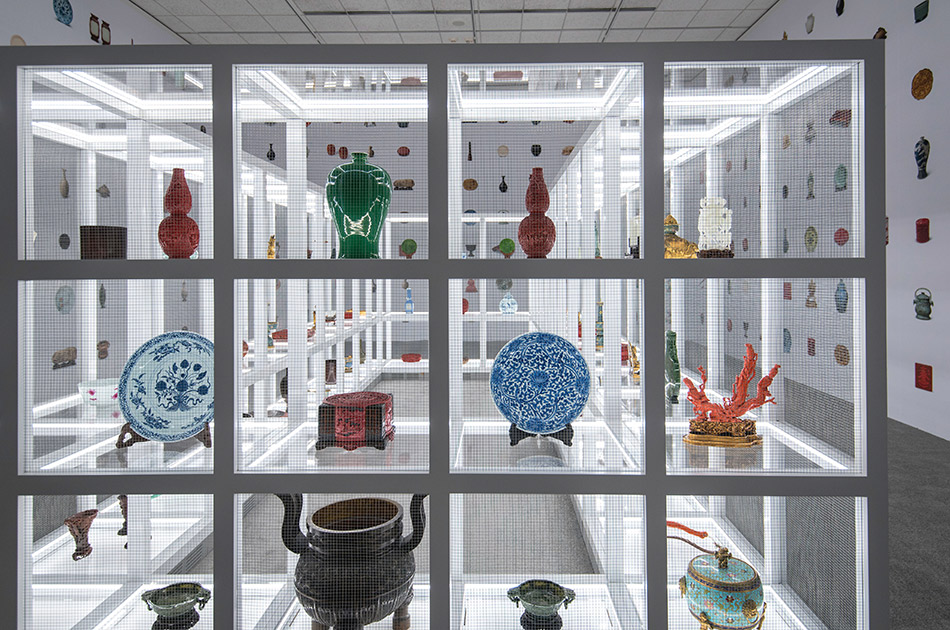 A rigid social hierarchy—with an omnipotent emperor who answered only to the heavens above—ensured the stability of the empire. This hierarchy was rigidly enforced by a strict dress code, which denoted a noble’s title, rank, and social status through color, symbolism, and accessories. In the center of the gallery, eight imperial robes are arrayed by rank. Only the highest-ranking members of the royal family could wear robes decorated with the 12 imperial symbols: the sun, moon, mountain, constellations, dragon, axe, cups, flame, bat, grain, pheasant, and waterweed. 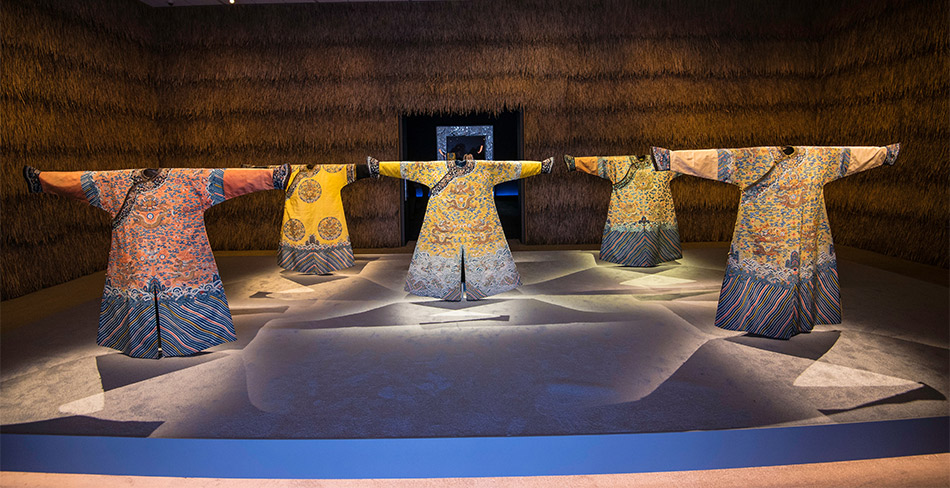 Only the emperor himself could wear yellow 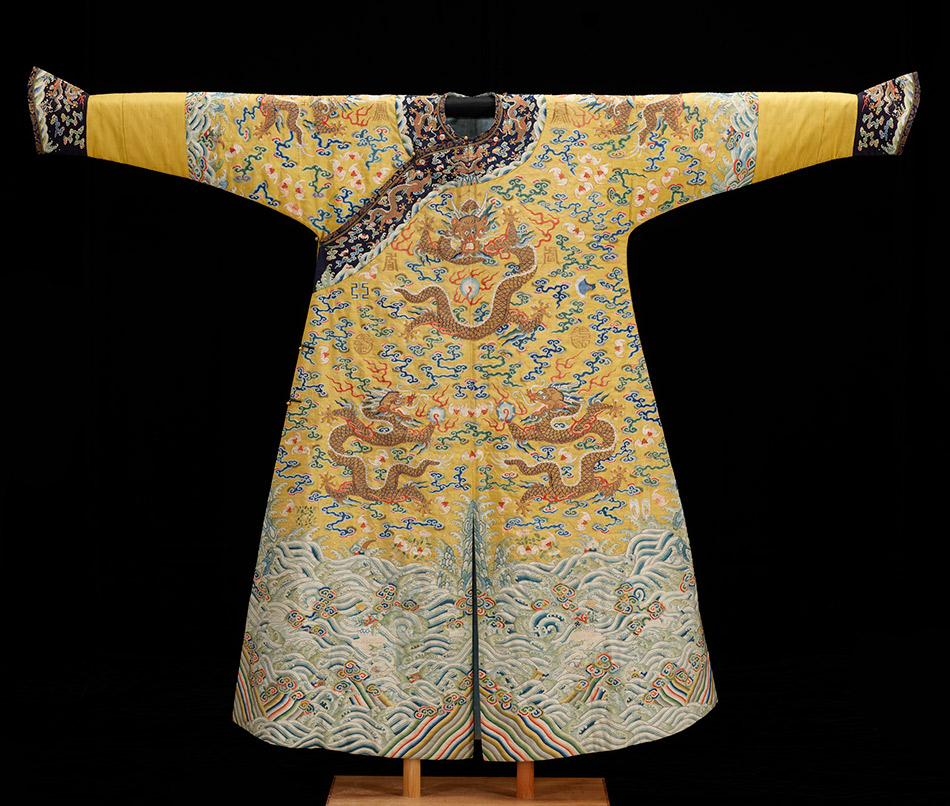 In addition to the rigid display of dragon robes, the grey carpet and the sound of wood blocks striking underline the rigid and severe imperial bureaucratic system. Straw thatch mounted on the walls, which evokes the lower classes the emperor ruled, serves as a foil to the delicacy and exquisiteness of the silk. 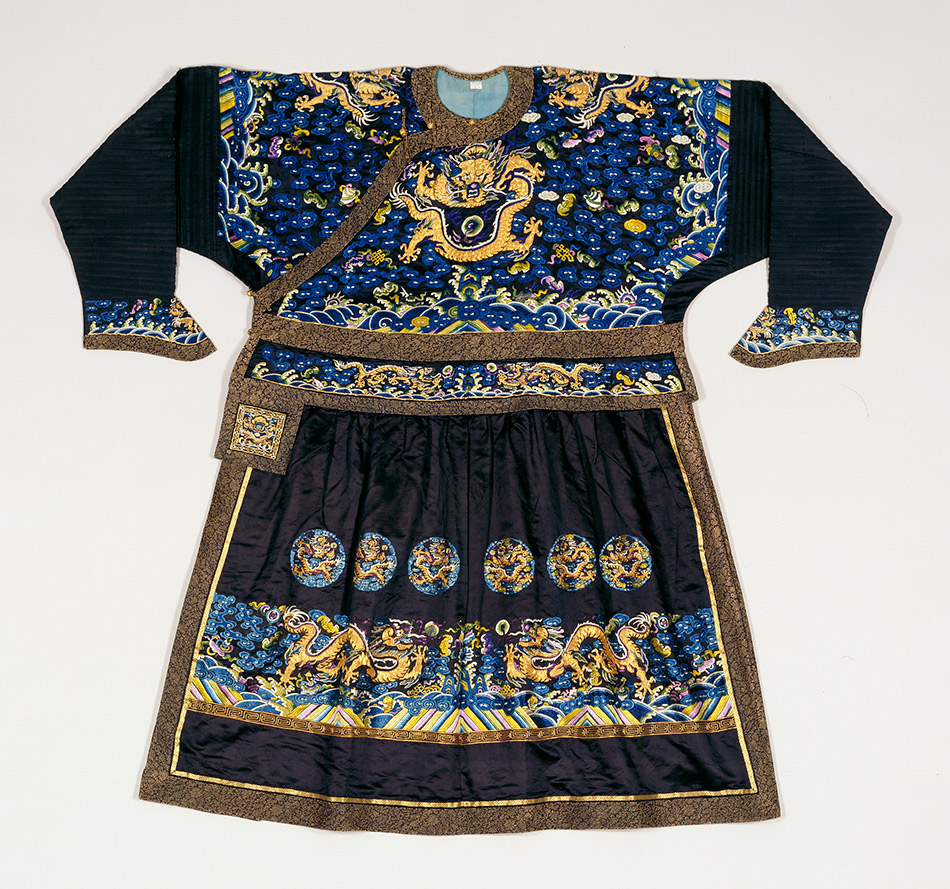 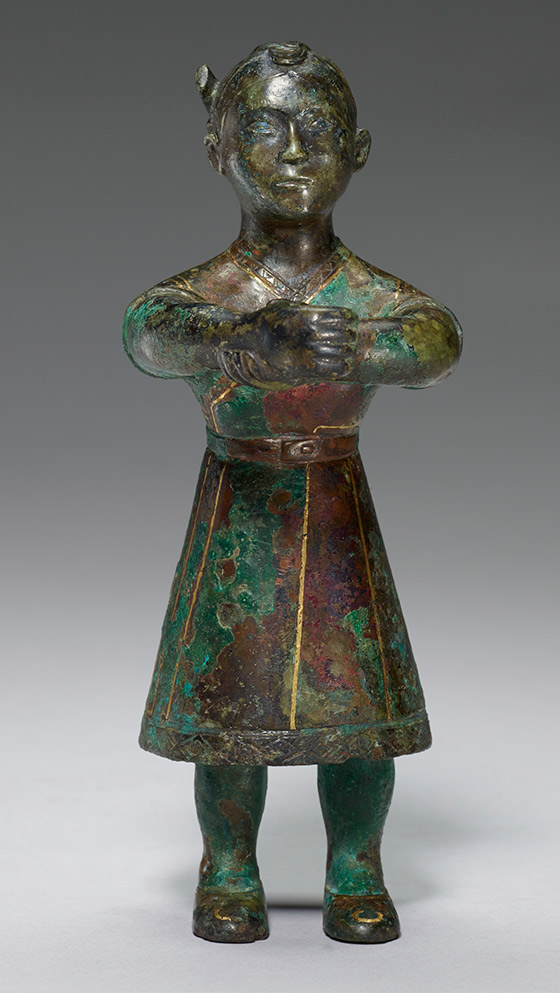 This gallery forms the core of the exhibition. Within a space of equal size to the previous few galleries, a single object, a tiny bronze human figure from the 5th to 4th century BCE, is on view. Cast in fine detail, the figure stands formally posed with arms held out and fingers curled to form a socket, which would have held the shank of an object. The single human figure from China’s Bronze Age suggests the ancient Chinese philosophy of governance. The right to rule was divinely granted, but if an emperor was cruel and oppressive, it was said that he would lose the Mandate and be toppled. Alone in the center of a gallery with emerald green walls and a soundscape of the pure and innocent voice of a child singing, the bronze figure from around the time of Confucius faces the formidable imperial authority represented in the adjacent gallery. 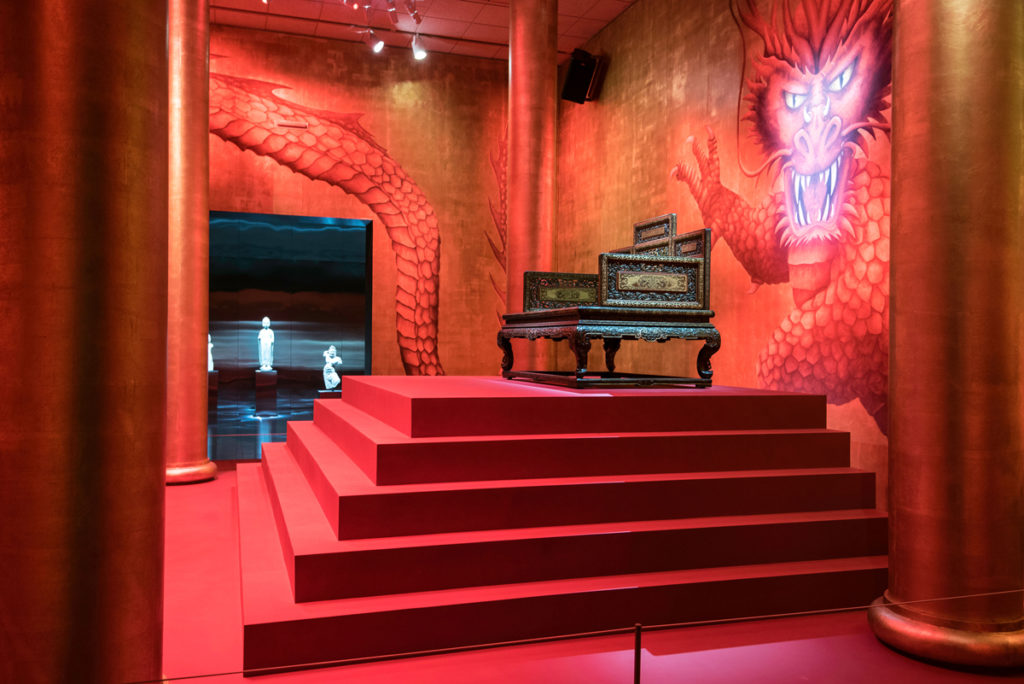 The emperor’s imperial throne conveys his fearsome authority. Gold lacquer dragons adorn the seat. Scrolls are carved into the sides, back, and legs, suggesting clouds and the emperor’s heavenly mandate to rule.

Placed there, it was as though the emperor could survey his entire kingdom. The soundscape of ceremonial music is intermittently interrupted by a hair-raising scream. 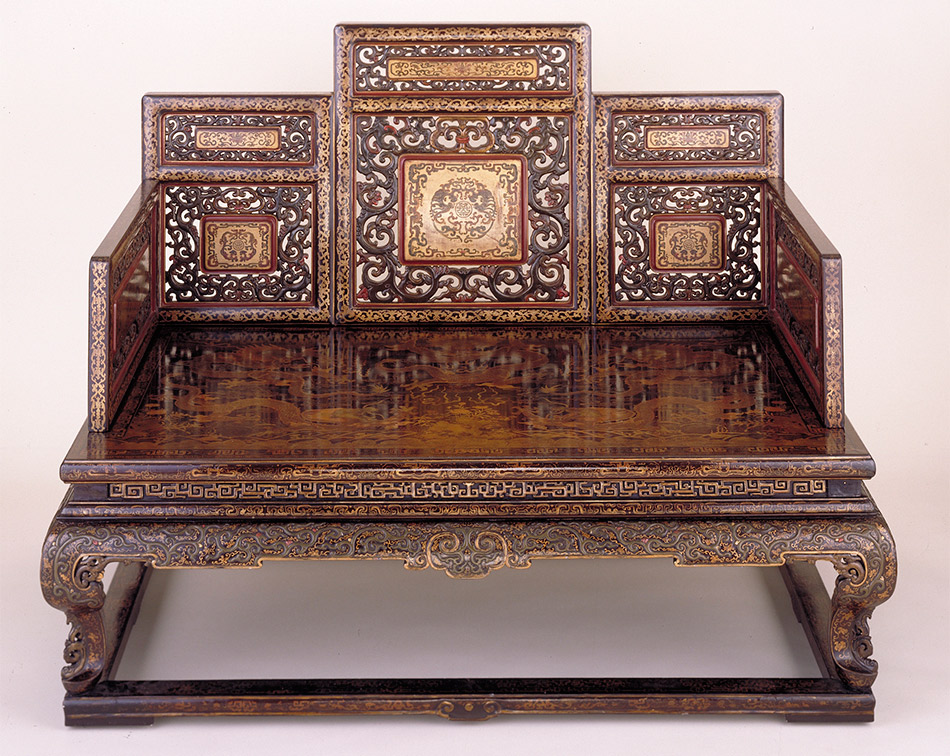 Amid the chants of a Buddhist sutra (scripture), five Buddhist statues stand on high pedestals, demanding visitors look up to see them. Religion and politics were often intertwined as rulers engaged in religious devotion and patronage of the religious arts in order to reinforce their reign. Buddhism was a major catalyst for monumental sculpture, painting, printing, and architecture. The Buddhist monk Faguo expressed this link in the early fifth century when he equated the emperor with the Buddha, explaining, “the Buddhist law would be very difficult to disseminate if it did not rely on imperial power and influence.” 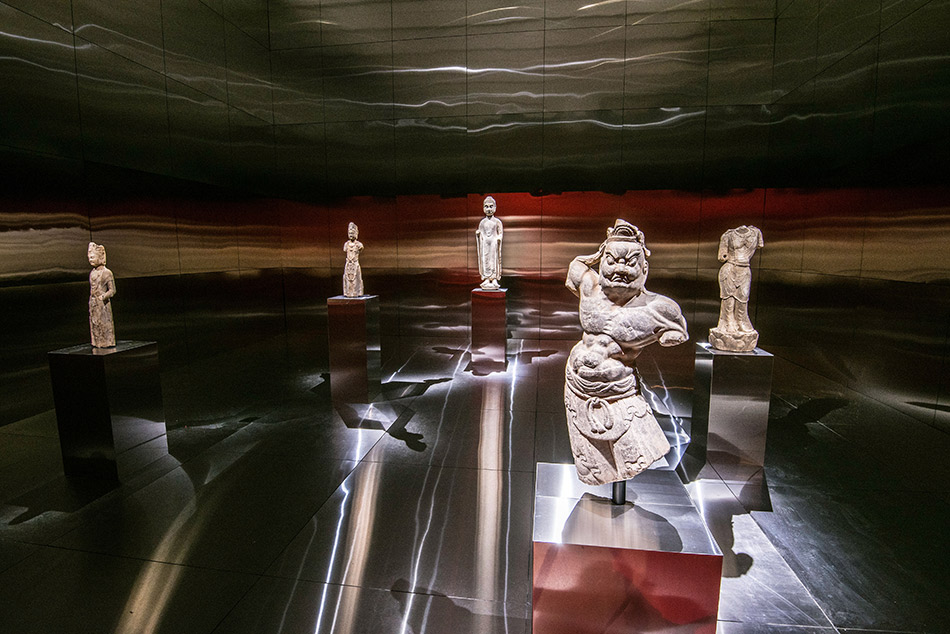 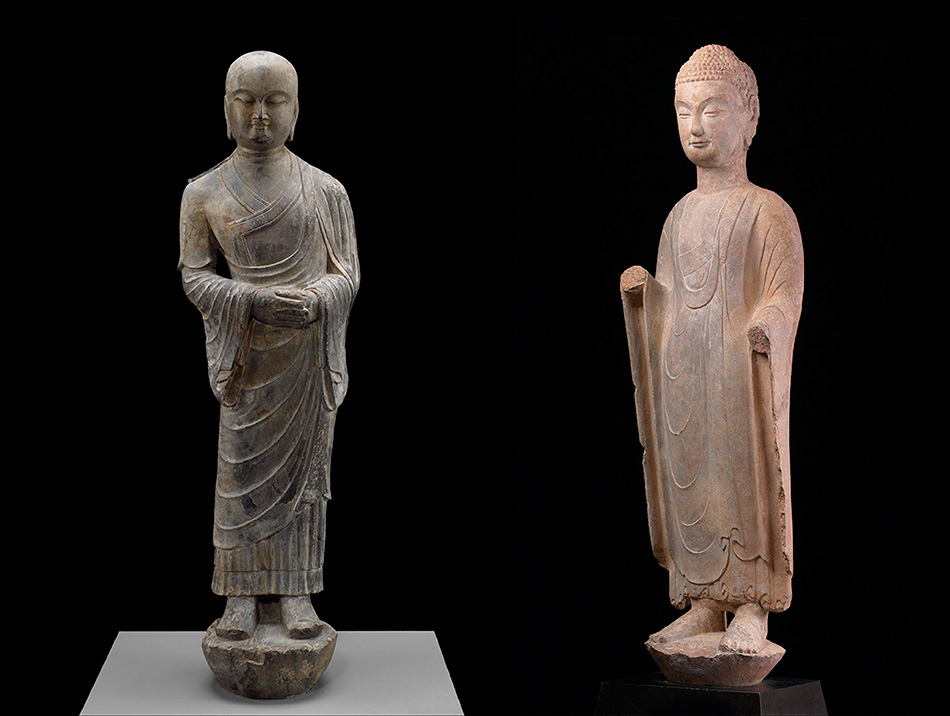 A gallery devoted to Daoist paintings, accompanied by the sounds of Daoist texts being read. During the Qing dynasty (1644–1911), Daoism flourished alongside Buddhism. Its roots can be traced to the sage Laozi (c. 571 BCE–c. 471 BCE), who wrote the classic text Daodejing (The Way and Its Power). Six centuries later, Daoism emerged as an organized religion with a supreme god known as Tianzun (Heavenly Worthy), a canon of scriptures, temples, priests, and a practice modeled on traditional Chinese popular religion. Its influence extended to Chinese art and culture, and, like Buddhist art, was used by rulers to legitimize their rule. The walls and the floor are covered with earthen plaster. 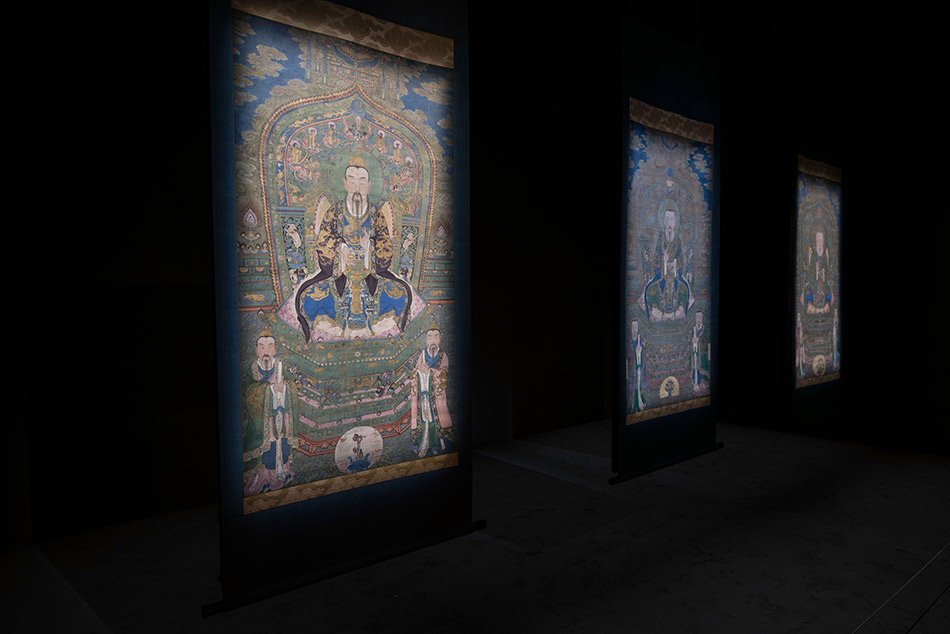 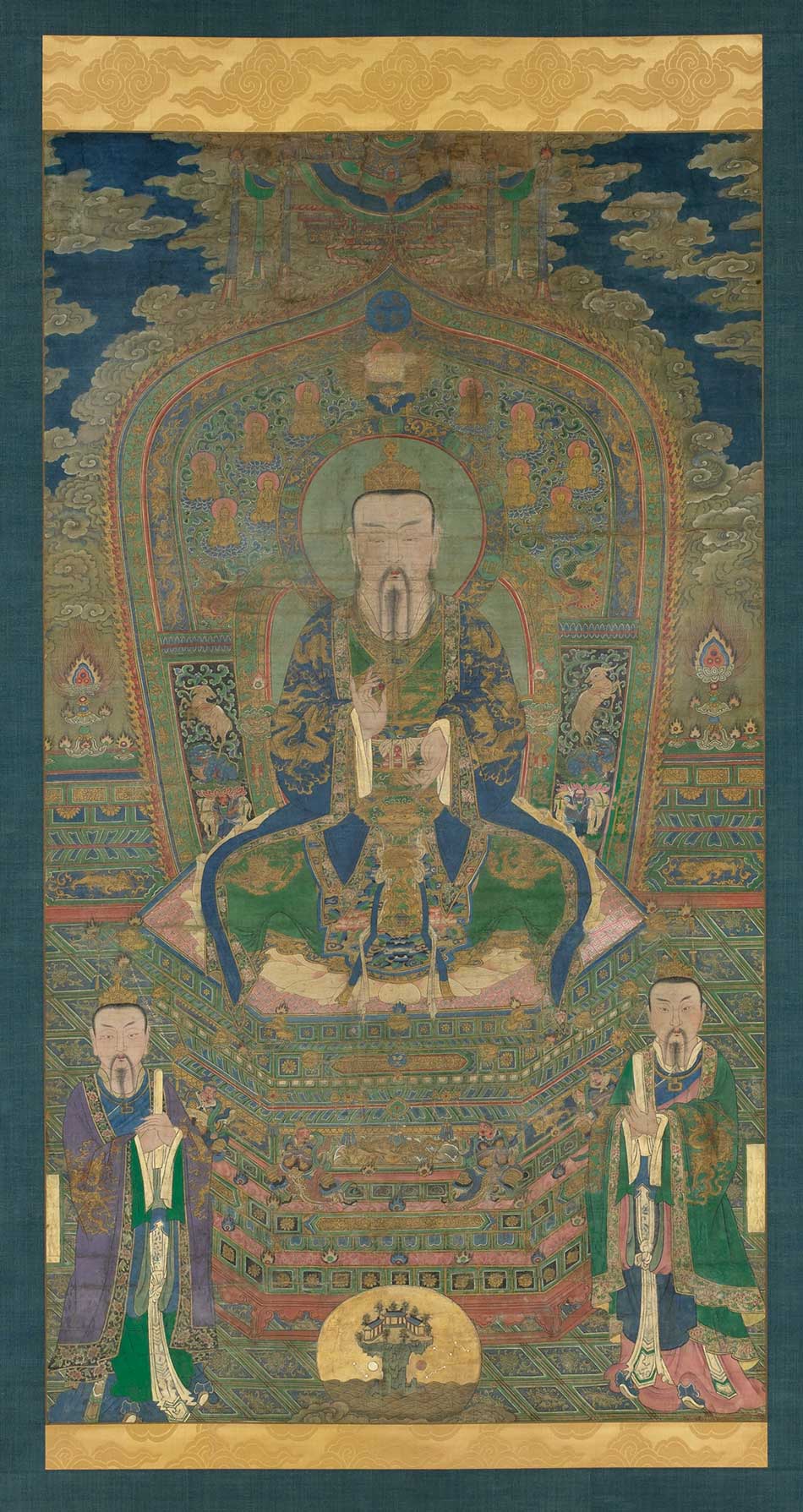 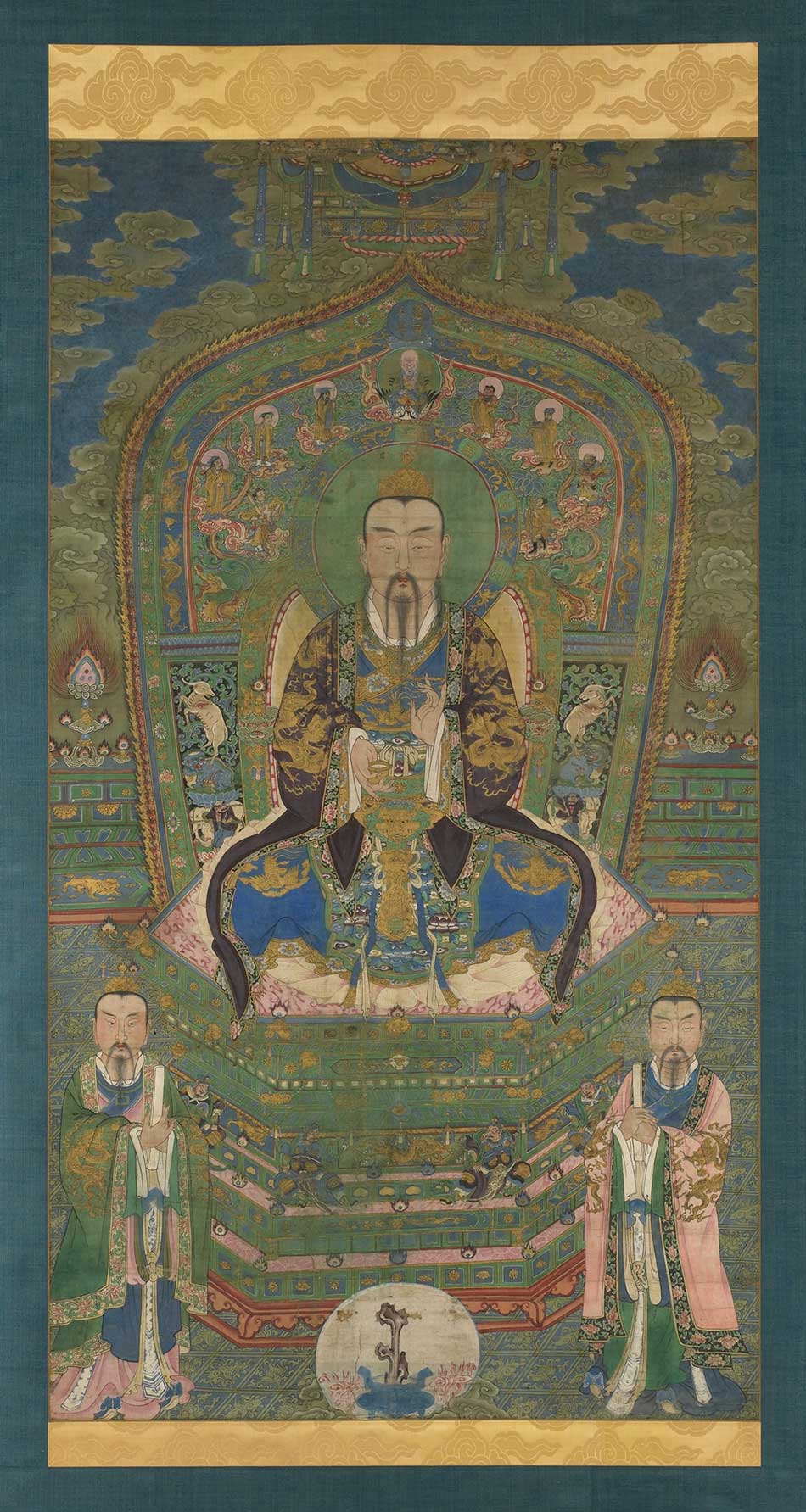 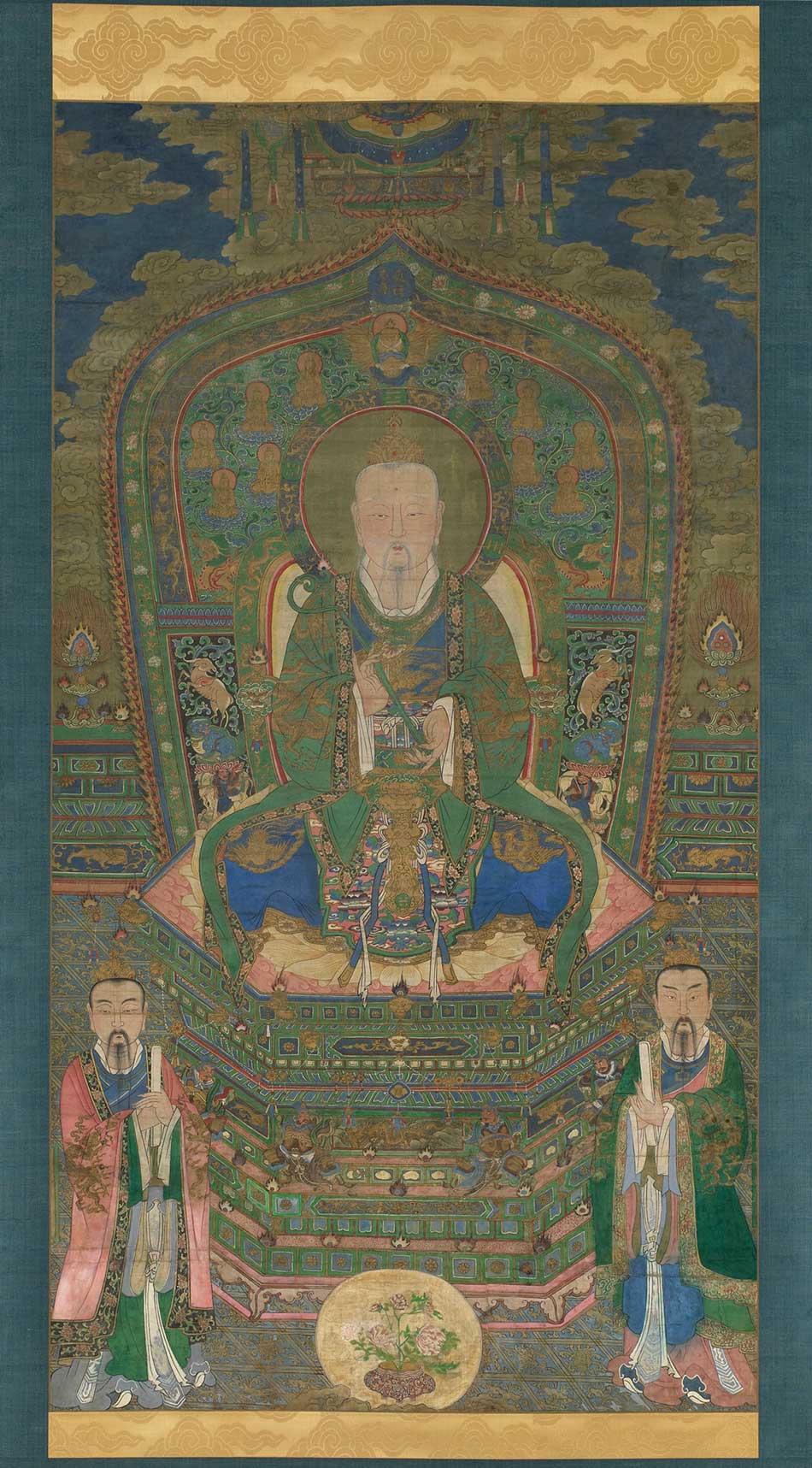 In male-dominated Chinese imperial society, and within the principle of yin and yang, women were considered the counterpoint to men—existing only in relation to them. In this gallery, objects associated with noblewomen suggest the palace’s inner quarters. The Qing period saw unparalleled production of gold and silver jewelry and the development of sophisticated technology for clothing manufacture, creating a remarkable material culture of garments and adornments for noblewomen. Placed irregularly, works in different media with different functions are juxtaposed. The aluminum-foil wallpaper suggests a voluptuous and extravagant lifestyle, but the soundscape, which is a melody with bitter and sad tones performed on an erhu (a two-stringed instrument) counterpointed by a woman giggling intermittently, conveys the life and destiny of Chinese women in the imperial period. 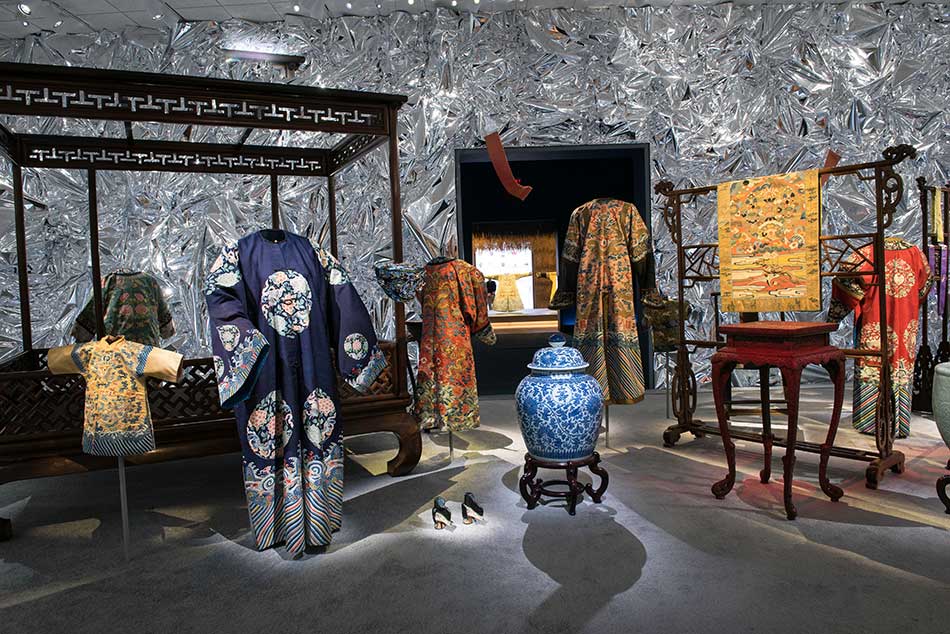 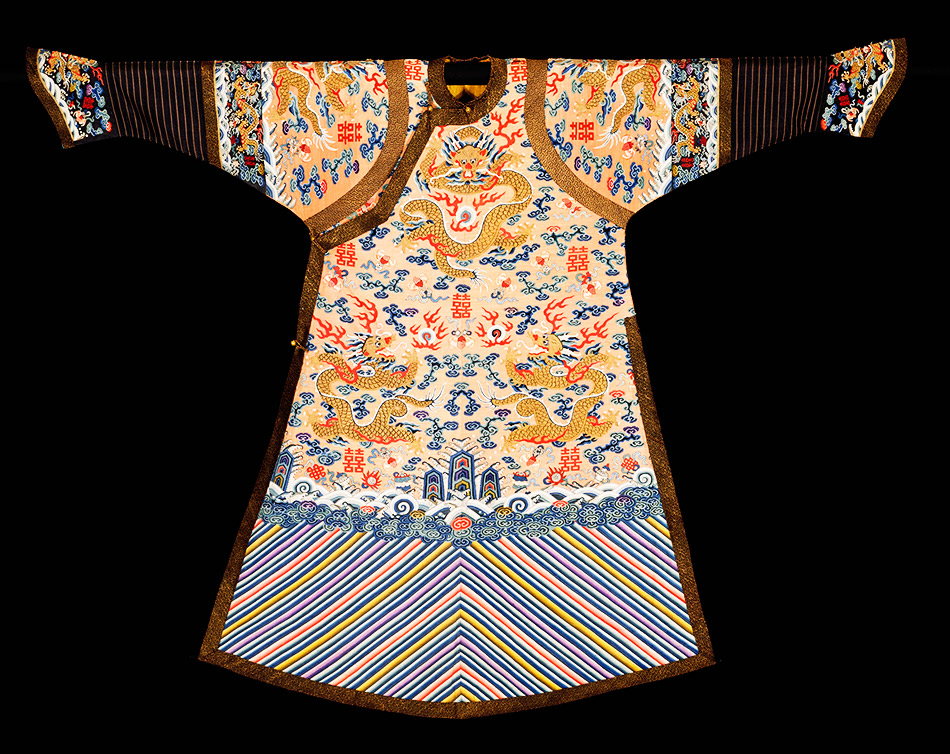 Gallery 9 – Mountains of the Mind

A display of two and three-dimensional depictions of mountain landscapes represents the ruler’s and scholar- officials’ fascination with nature. Steeped in centuries of religion, history, literature and folklore, China’s mountains are seen as divine realms and endowed with myriad sacred associations. Emperors and courtiers alike dreamed of retreating from society into a life of seclusion in the mountains—an escape that remained hypothetical. Instead, they cultivated the concept of chaoyin (“recluse at court”), a belief that one could engage with the world while preserving an internal sense of seclusion, remaining spiritually remote and uncontaminated by public life. 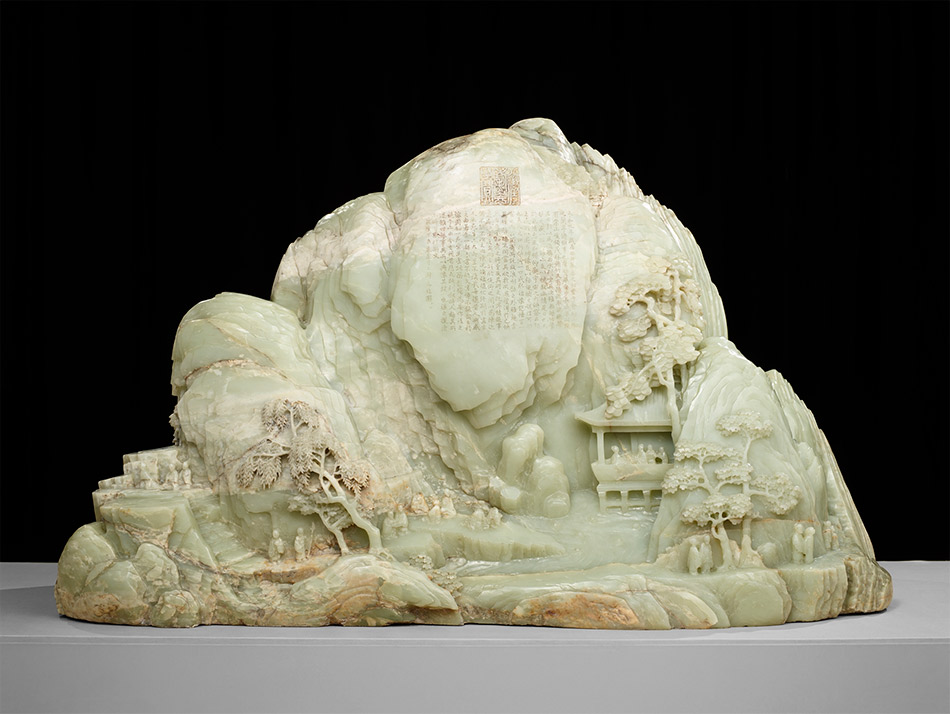 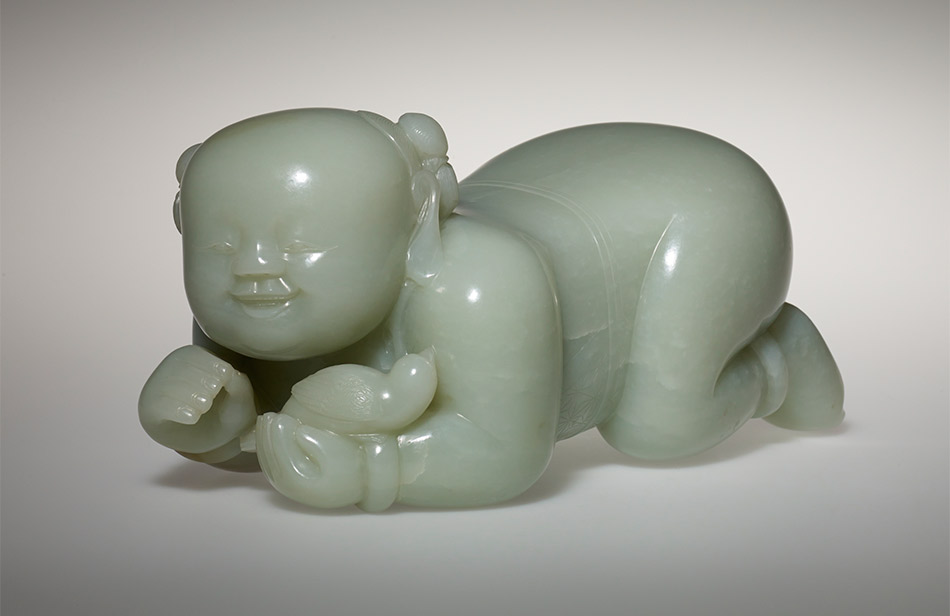 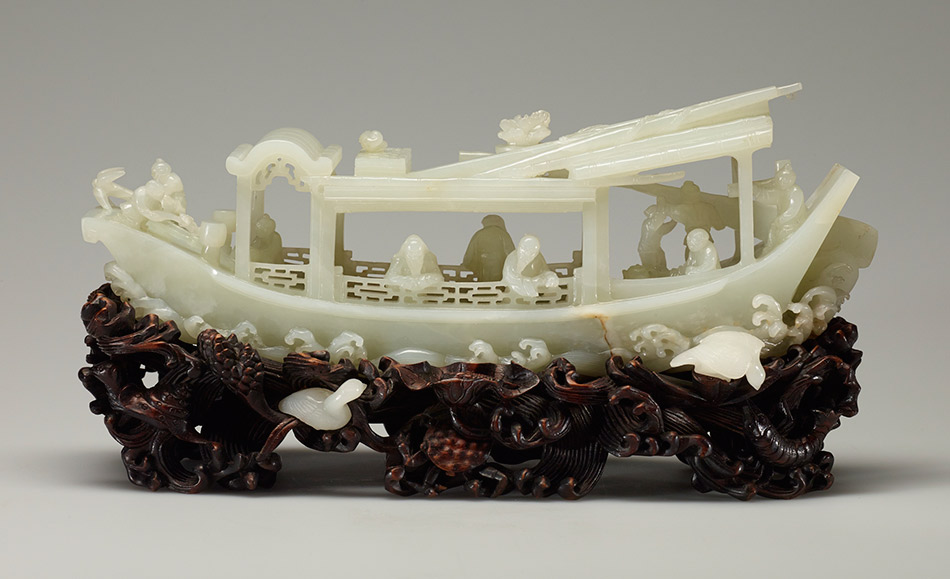 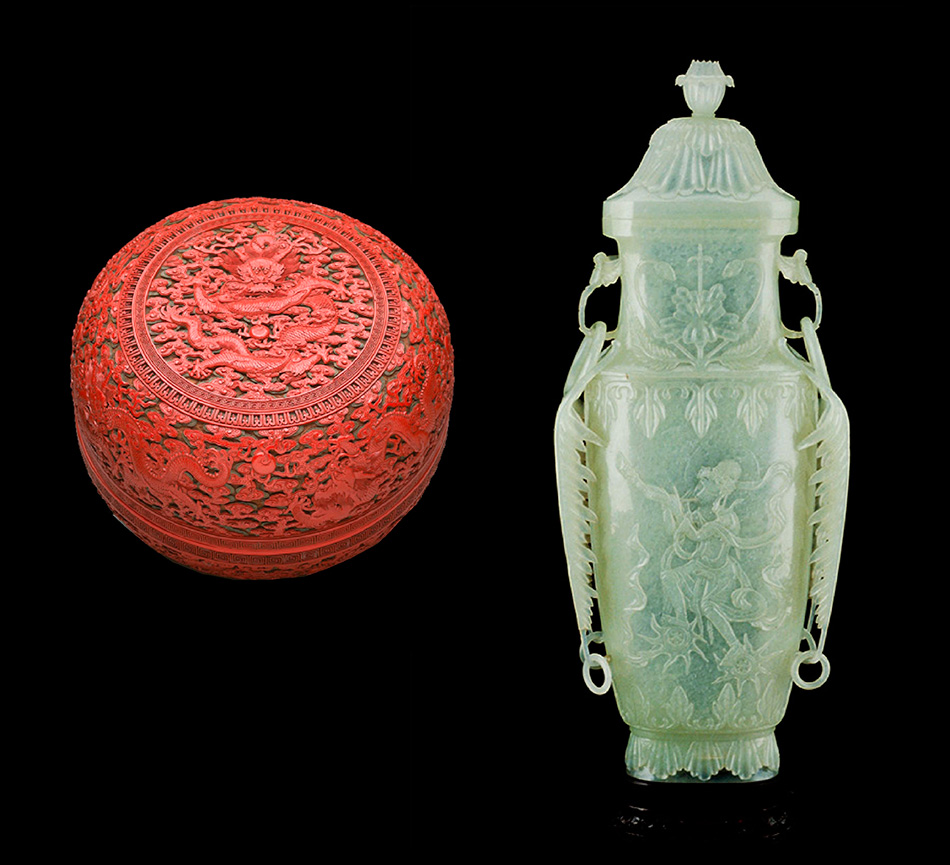 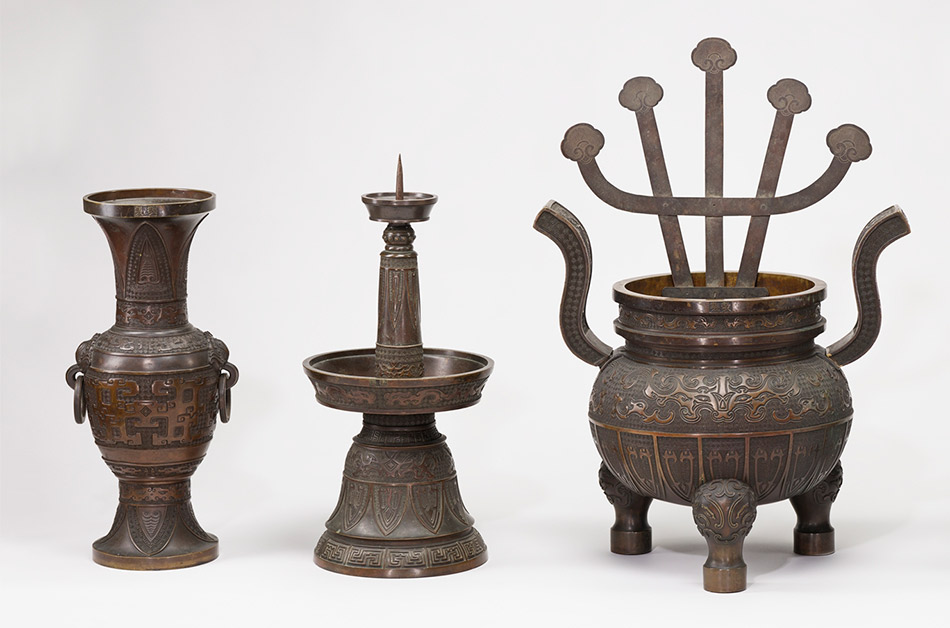 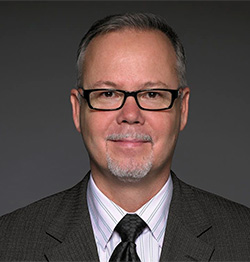 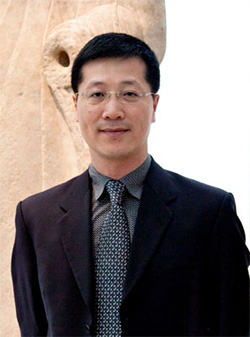 “Mia has one of the world’s great collections of Chinese art outside of China,”
“Our collection of Qing dynasty textiles is one of the most comprehensive in the West, and we have many other important objects associated with the Qing emperors and their courts. It is personally very exciting for me to be able to highlight these objects in an unexpected and fresh manner by working with Robert Wilson.”

About the Asian Art Collection at Mia. Mia’s collection of Asian art comprises some 16,800 objects ranging from ancient pottery and bronzes to works by contemporary artists, with nearly every Asian culture represented. Areas of particular depth include the arts of China, Japan, and Korea.
Specific subsets and highlights of these collections rival the holdings of museums across the globe. The museum’s holdings of ancient textile, lacquer wares and hardwood furniture comprise one of the largest and best collections in the West. For its stylistic diversity and condition, Mia’s collection of ancient Chinese bronze is typically considered one of the nation’s top collections of its kind. Important examples include a famous vessel in the form of an owl, superb silver inlaid works, and many other outstanding vessels from the Shang and Zhou dynasties (c. 17th–3rd century BCE). Mia’s Japanese collection has outstanding concentrations of Buddhist sculpture, woodblock prints, paintings, lacquer, works of bamboo, and ceramics, and is particularly rich in works from the Edo period (1610–1868).

All images courtesy of the Minneapolis Institute of Art