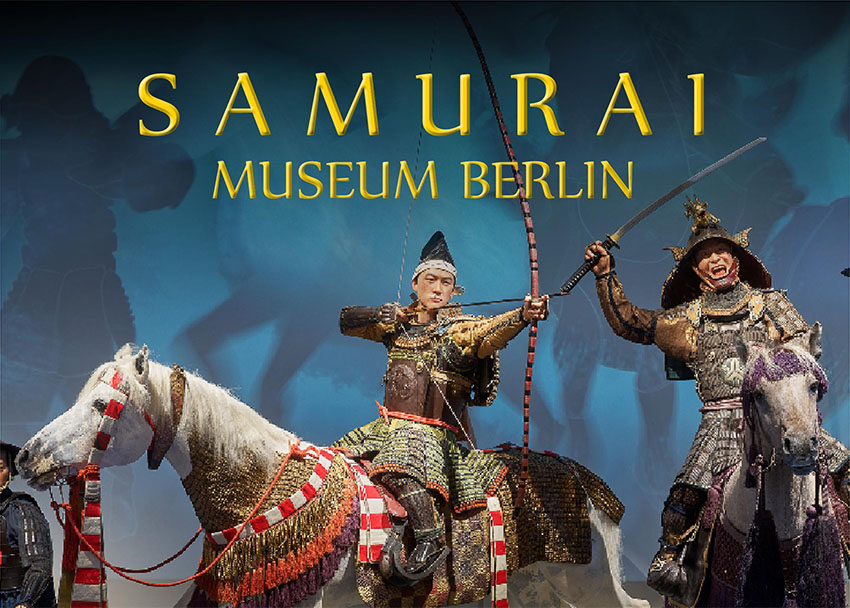 On May 8, 2022, the Samurai Museum Berlin was inaugurated.
The museum displays on 1,500 square meters one of the largest collections of
authentic samurai objects outside Japan and unique in Europe.
Visitors can immerse themselves in the legendary world of Japanese warriors with pieces from the late Kofun period, around the year 500, to the Meiji period in the 19th century.
More than 1,000 extraordinary pieces from the Peter Janssen Collection consisting of
fascinating armor, legendary swords and amazing masks, lead us through a narrative presented in state-of-the-art interactive multimedia installations, which show in an exceptional way the warrior caste of the samurai and its evolution over the centuries. 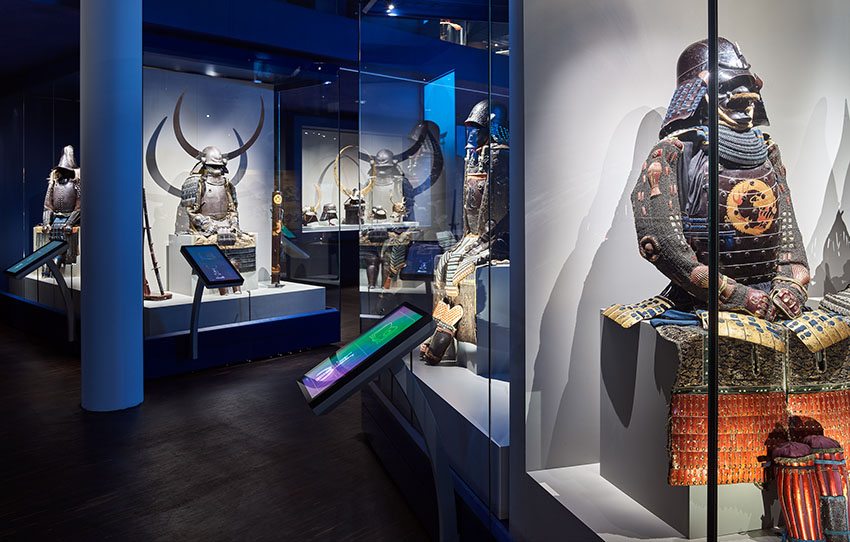 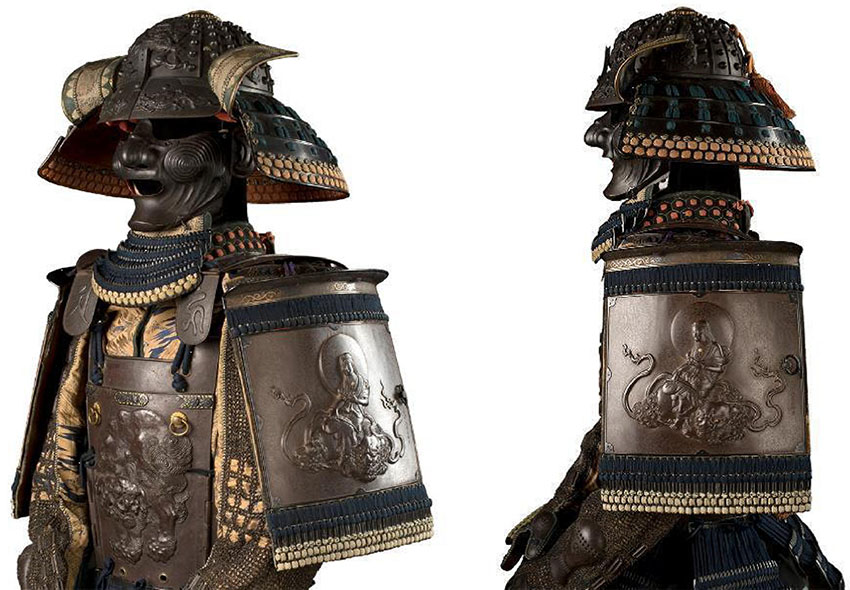 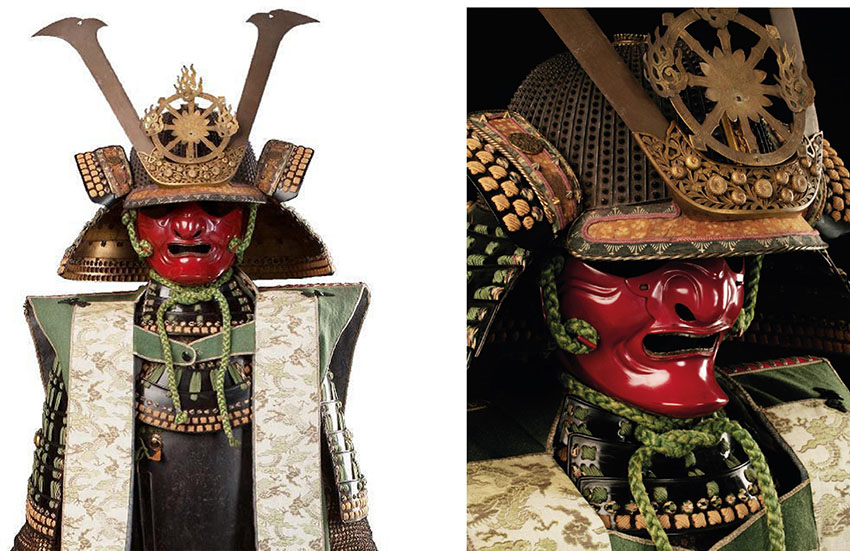 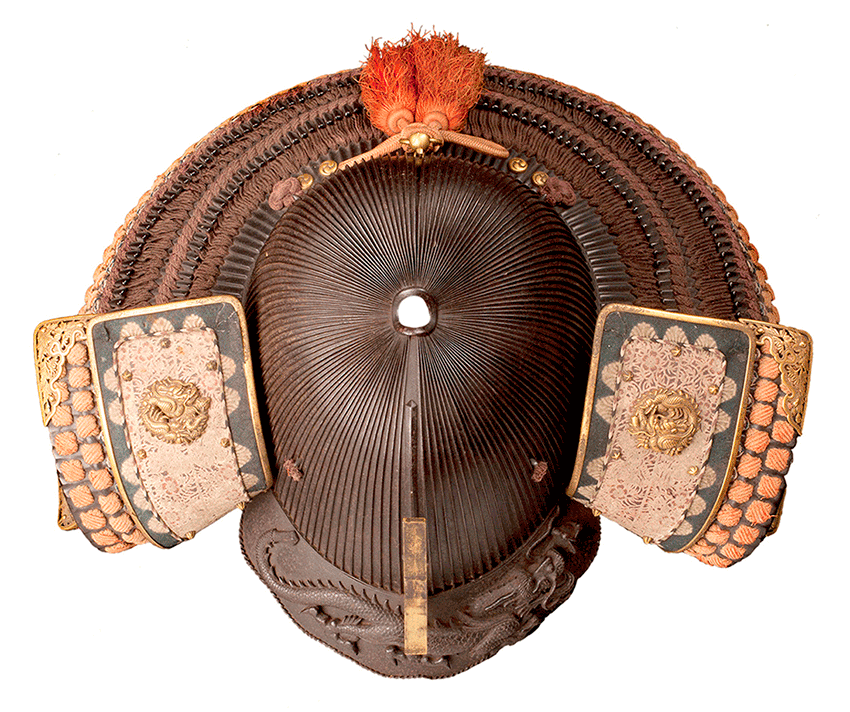 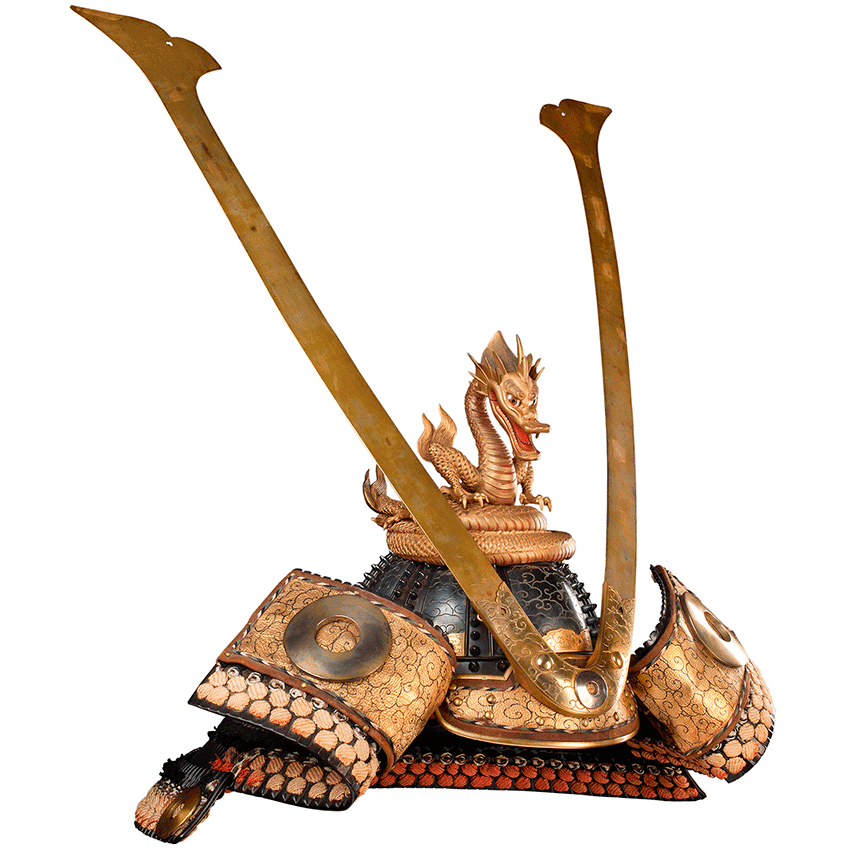 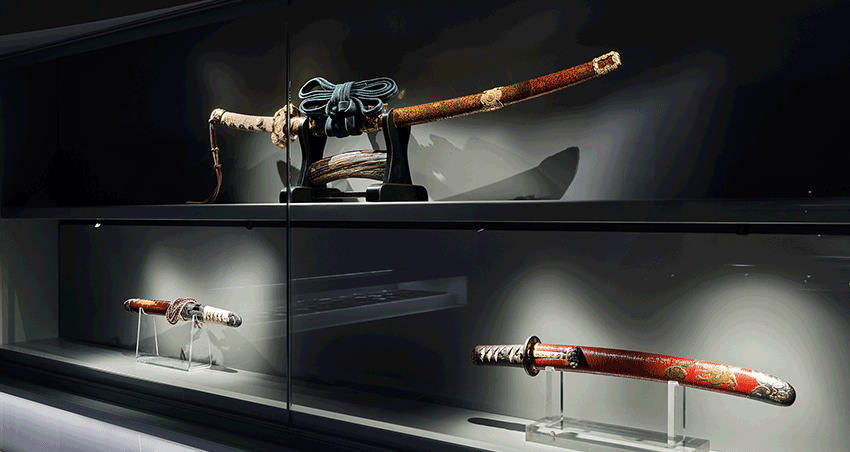 This blade was made by Rai Kunimitsu, who is said to have been the son of Kunitoshi. His dated works range from the late Kamakura period (1185-1333) to the beginning of the Nanbokuchō period (1336-1392). If the various styles of the Rai smiths stemming from Yamashiro Province (present-day Kyoto Prefecture) are compared to each other, Kunimitsu is probably the most skillful, as he worked with a wide range of techniques.

This blade is attributed to Rai Kunitoshi, a smith affiliated with the Rai School of Yamashiro Province (present-day Kyoto Prefecture). All dated works by Kunitoshi were made within a timespan of around forty years (1278—1321). The blade is dated to around 1319—1324.

This blade was forged by Nobukuni of the first generation, who had been a member of the Ryōkai School and was said to be one of the ‘Three Great Students of Sadamune’ (Sadamune santetsu). The Ryōkai School is an offshoot of the Rai School, which has its roots in Yamashiro Province (present-day Kyoto Prefecture). 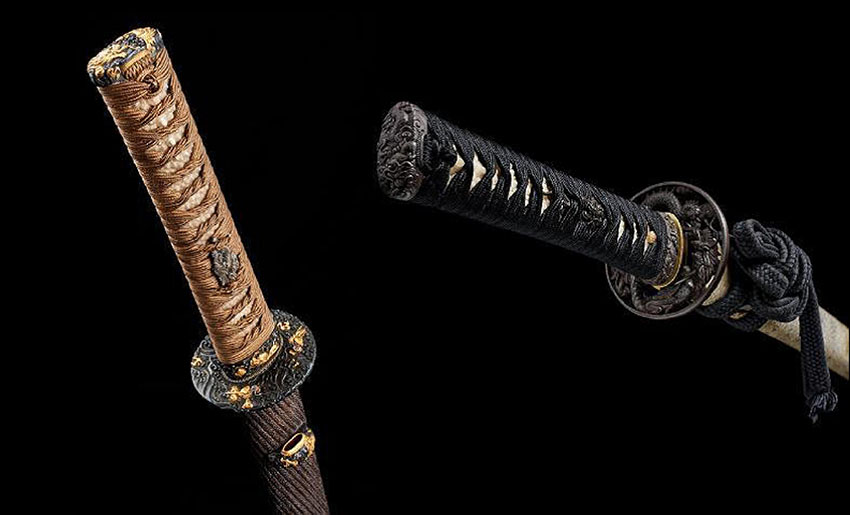 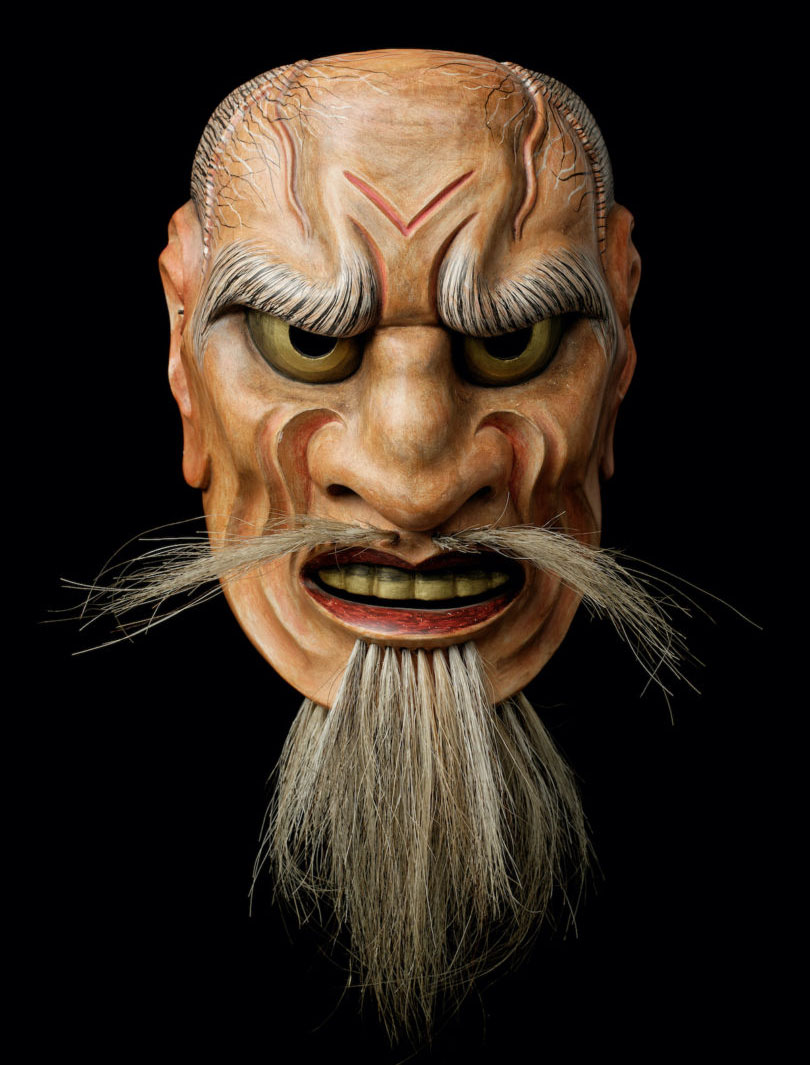 Hannya mask
This object represents a hannya mask of the onryo type, which in Nō theatre means the portrayal of vengeful ghosts and spirits. Hannya were chosen for plays in which women transform into demonic creatures as a result of rejection or betrayal. Nō mask of a 19th – 20th century, cypress wood, minerals, seashell pigment (gofun)
© Samurai Museum Berlin, photo: Norbert Artner 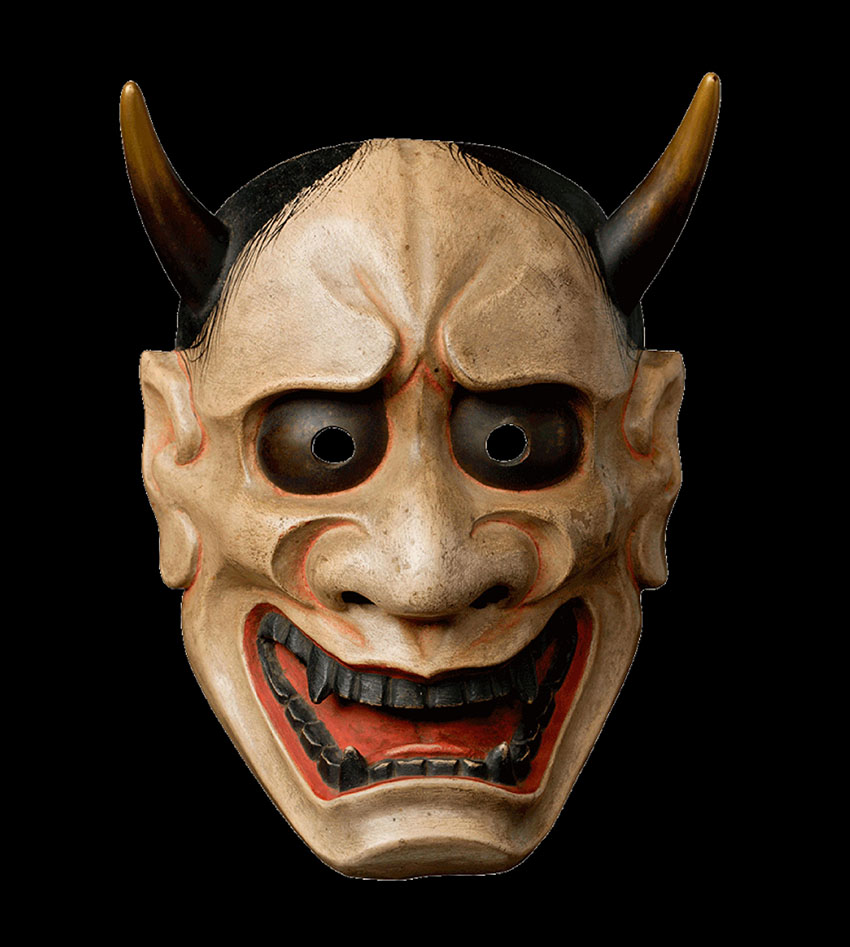 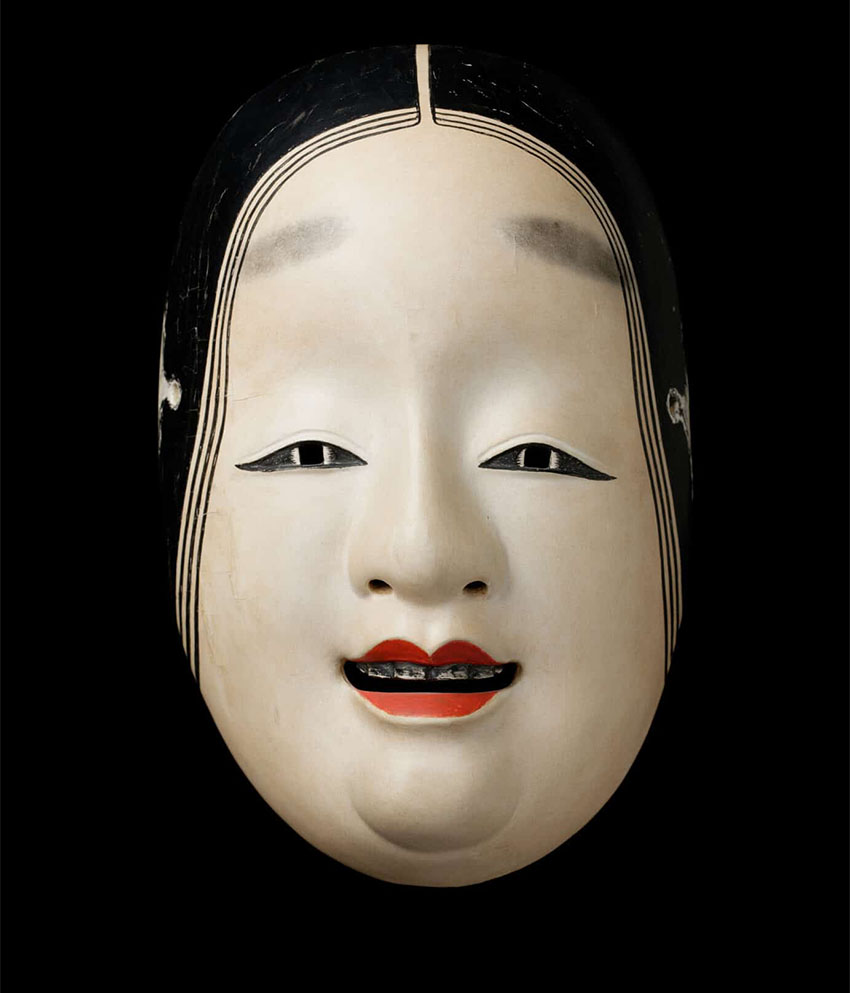 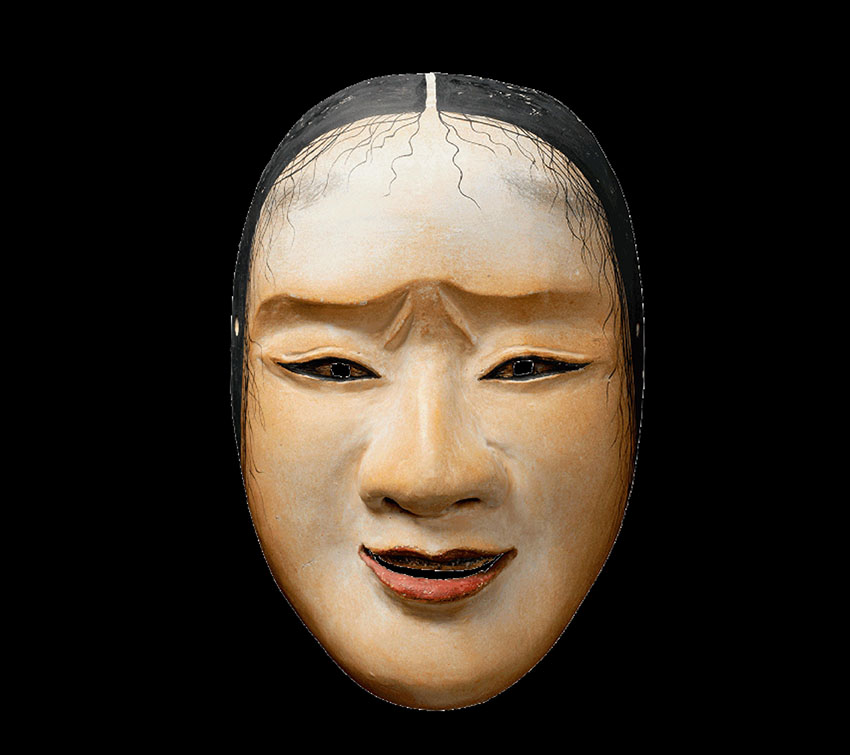 Nō Theatre
The Noh theatre was built in Japan and now brings the traditional Japanese performing arts of chanting, ritualised dance, and music to Berlin through a holographic projection. 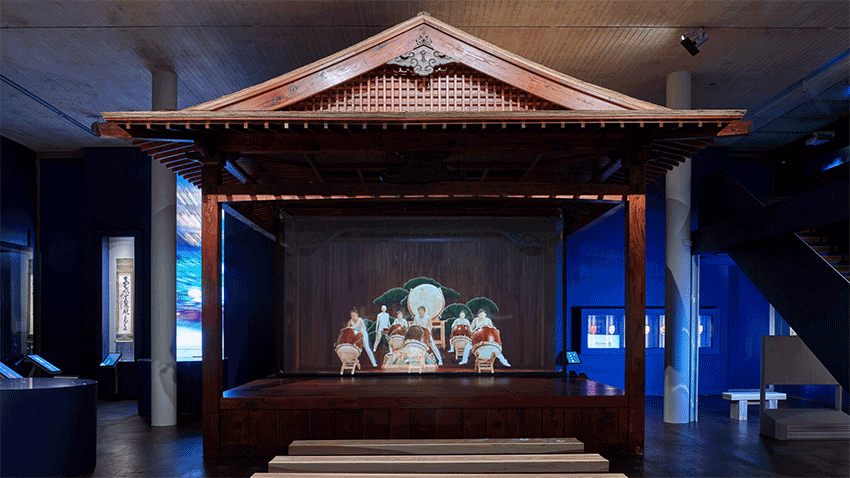 The Tea ceremony
The museum also presents a space dedicated to the traditional and important tea ceremony in the culture of Japan, whose roots go back thousands of years. The entire tea ceremony is visualized through a holographic projection. 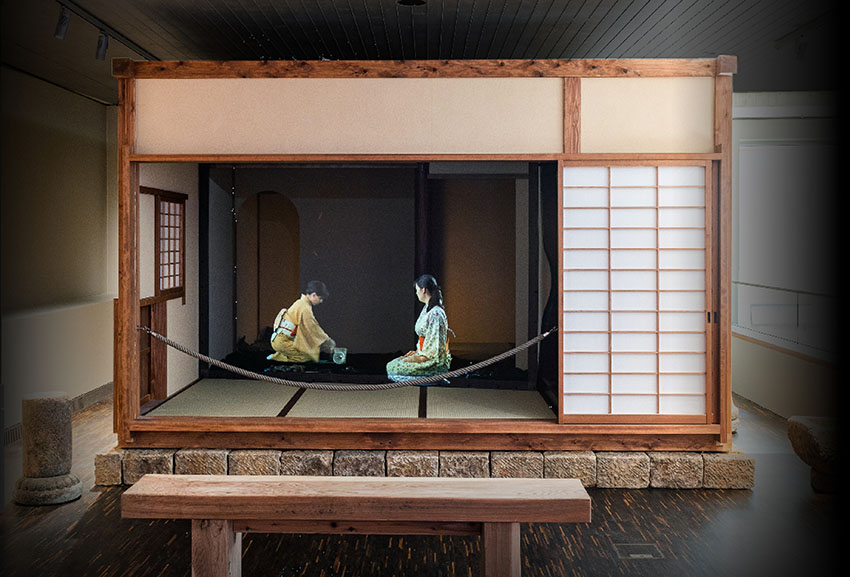 An educational exhibition for all ages
The Museum has developed special programs for children and schoolchildren as well
as for the adult public and Art History specialists. 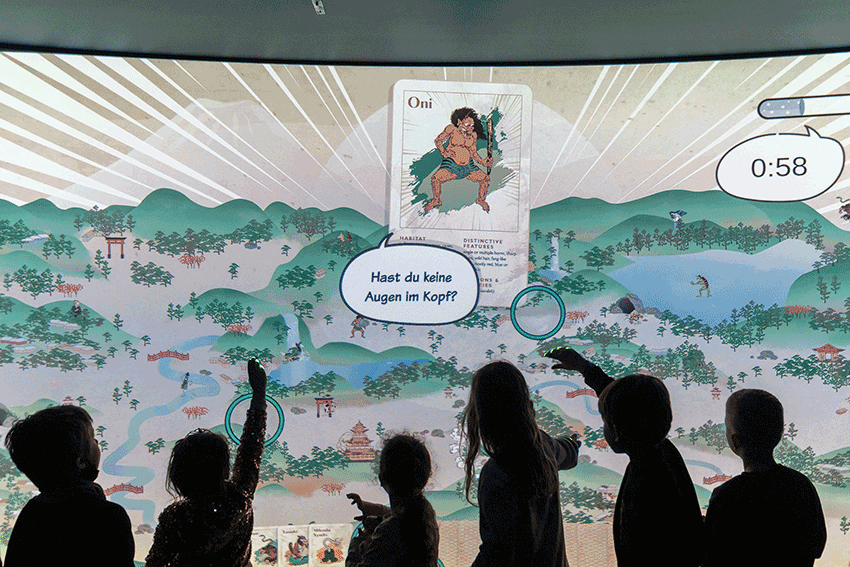 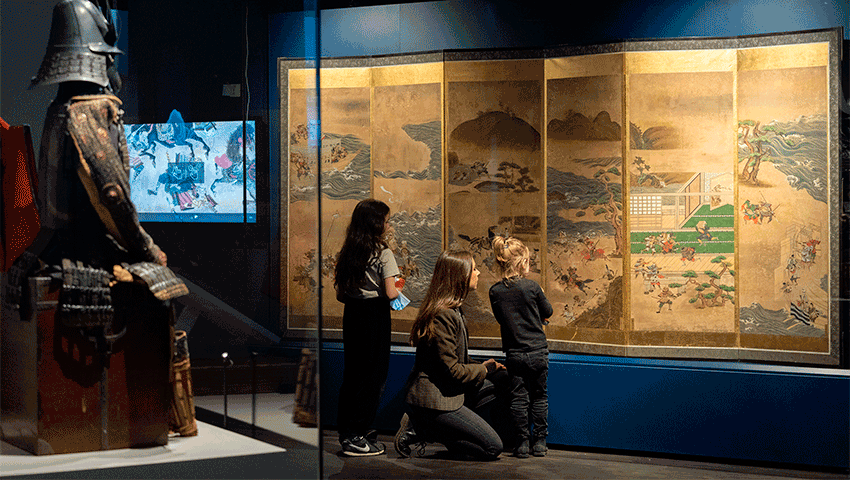 A temporary exhibition by photographer Sylwia Makris presents her interpretation of “The 7 Virtues”, based on the seven virtues of Bushido, the Samurai code of honor and conduct (Bushido means “the way of the warrior”). Makris reimagines in an extraordinary way the male and female warriors and significant everyday moments of Japan’s millenary culture. 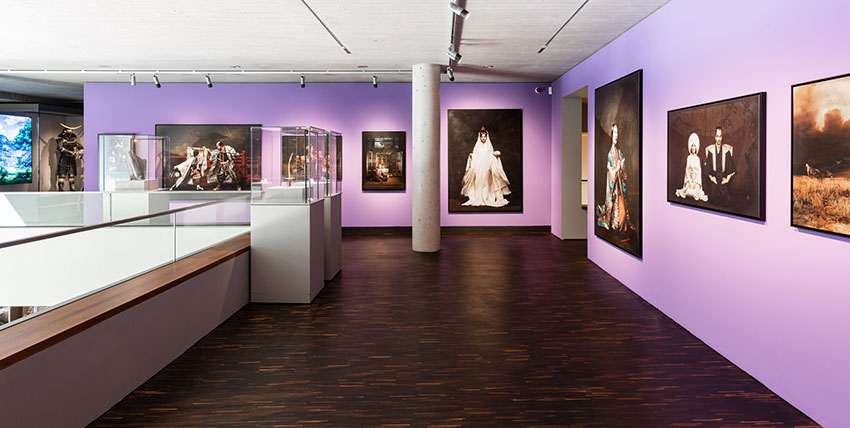 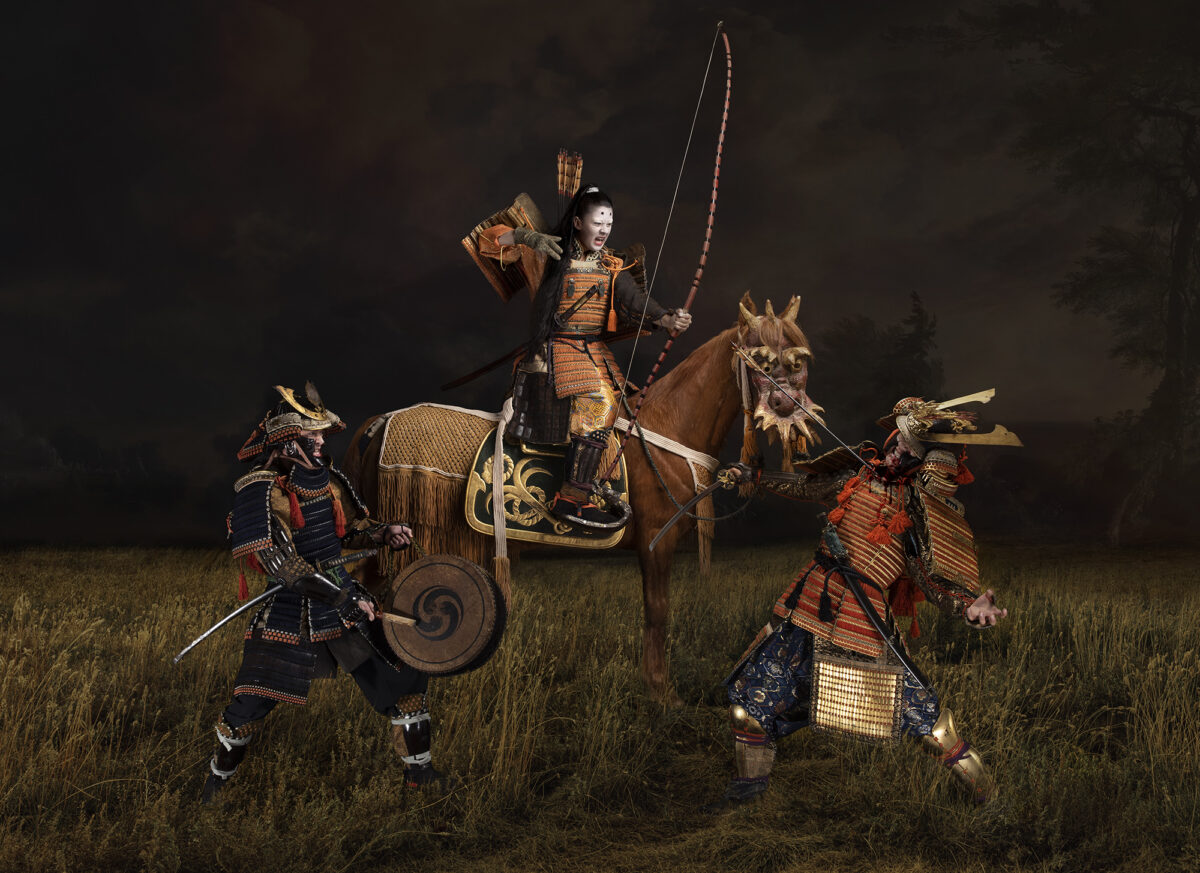 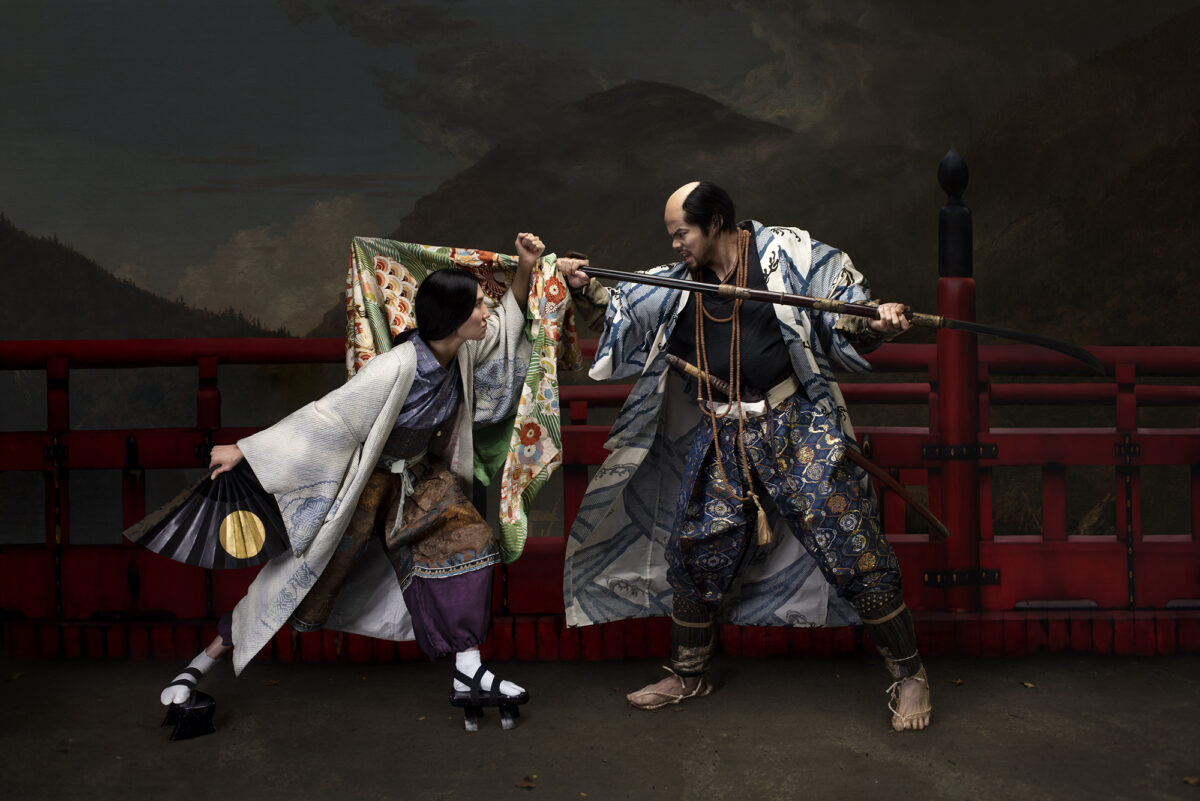 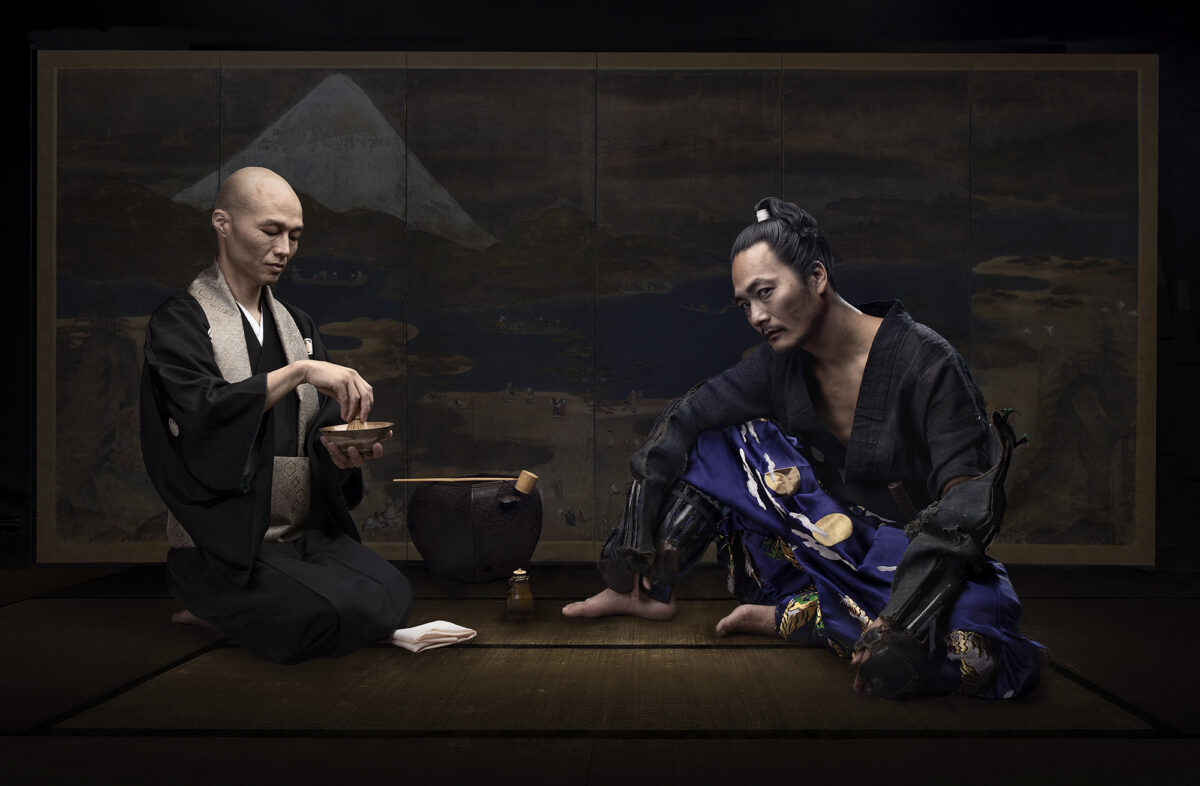 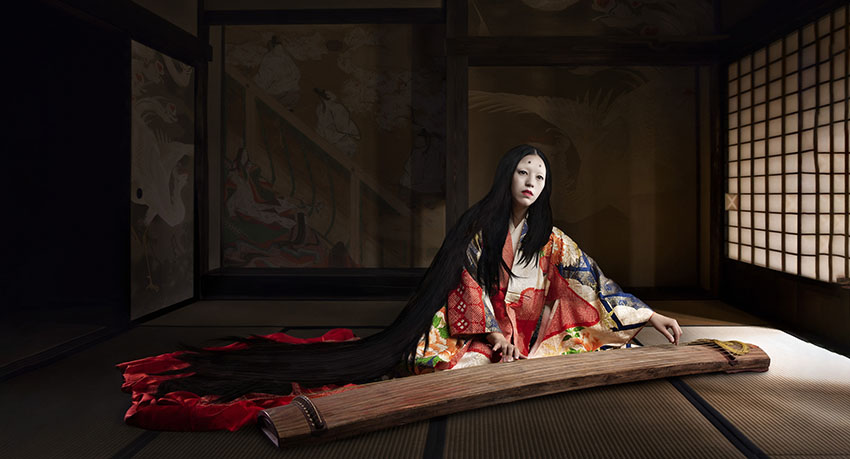 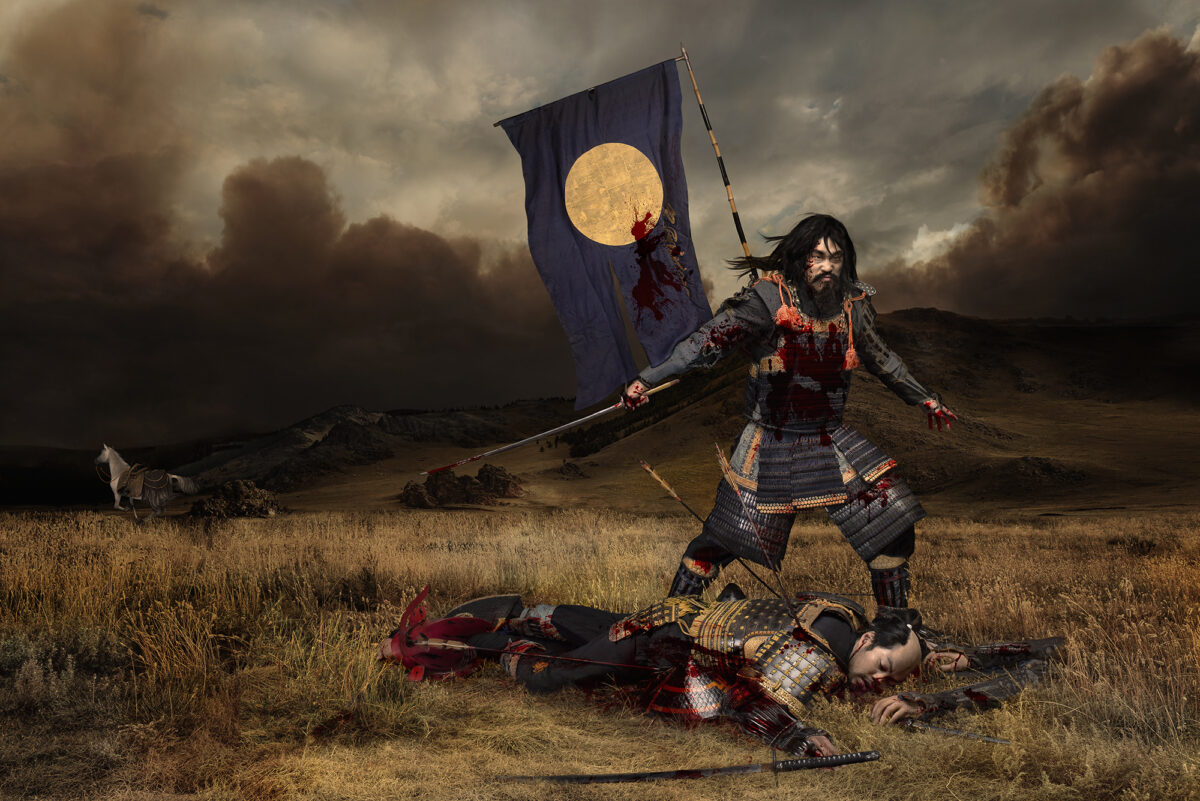 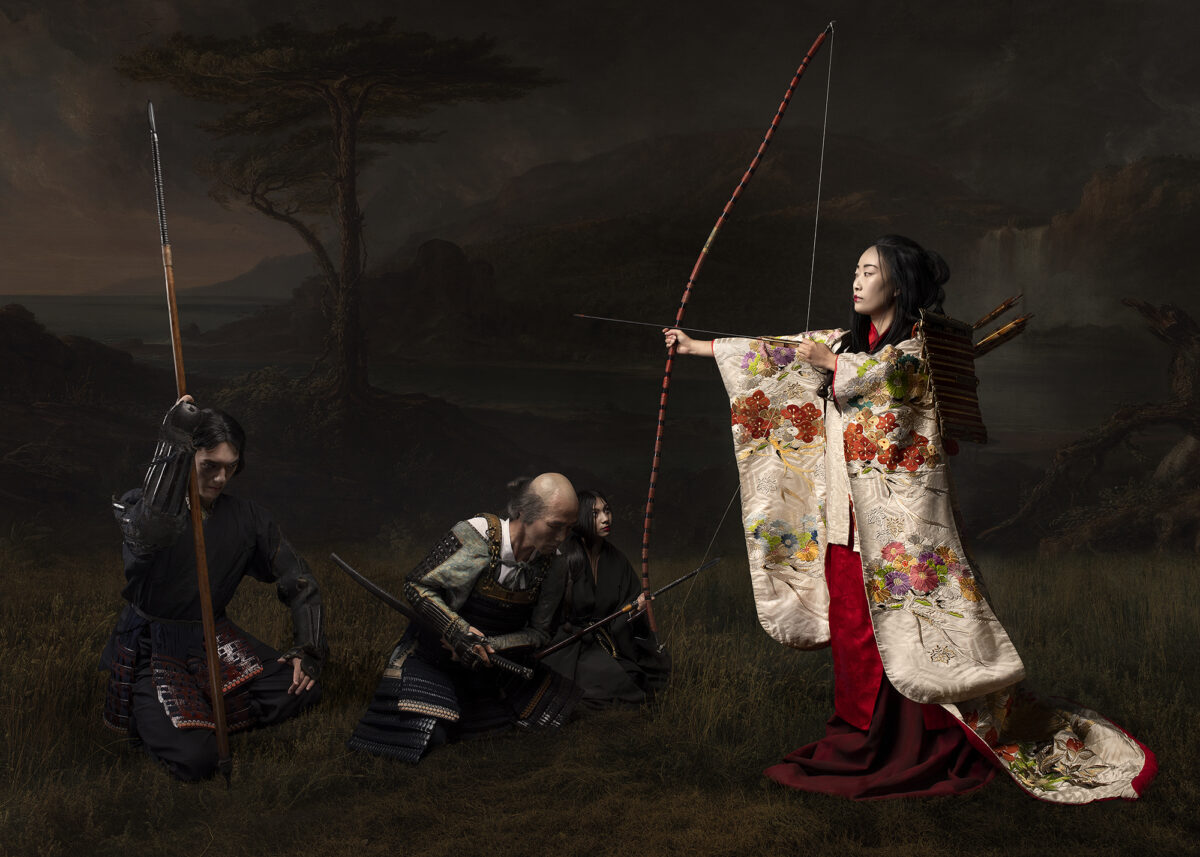 Interview with Peter Janssen
creator of the Museum 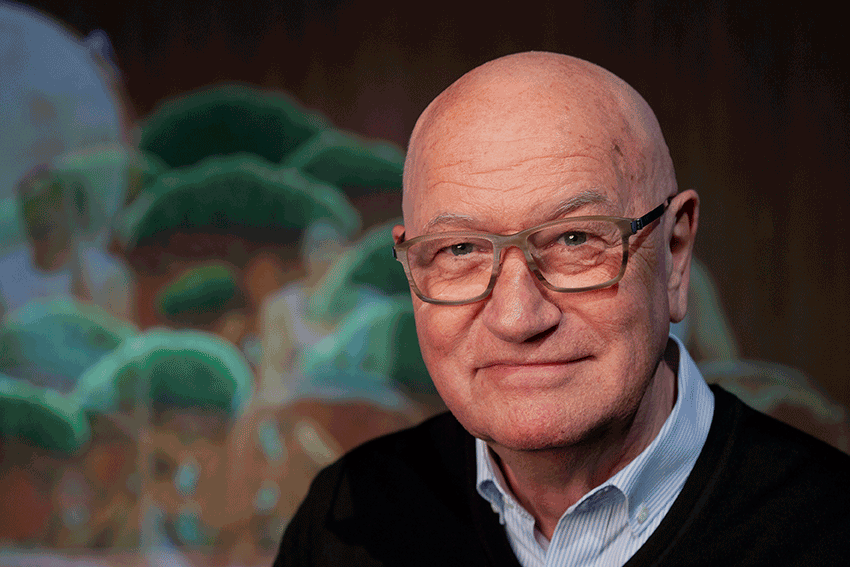 The man who has patiently created for 40 years one of the most important collections in the world, explains his passion for the art and history of samurai culture.

PATRONS: You have been interviewed by the most important press in the world on the occasion of the opening of the Samurai Museum Berlin. What is the important question you would have liked to have been asked and no one has asked you?

Peter Janssen: That’s an interesting question. So far nobody asked me if I try to live by the principles of Bushido myself. The answer would be: Yes. Bushido incorporates moral teachings in general and is the foundation for the development of ethical and moral awareness. This was, and is, important for all human beings in order to live in harmony with others (and the universe). It should be anchored in our subconscious, so that we can live by it intuitively without having to think about it. That’s what it means to live by “The Way of the Warrior”, on the battlefield you have no time, you need to react immediately without having to think about it.

PATRONS: Do you believe that the Bushido ethic can contribute to the education of young people in the West?

Peter Janssen: Since I highly value the principles of Bushido myself, it’s only natural for me to believe that Bushido is relevant to young people now as much as it was hundreds of years ago, no matter where they come from. We all could do with more etical and moral awareness in our lives.

PATRONS: What have been the most exciting moments in the creation of your collection?

Peter Janssen: One of the most exciting moments was when the board members of the Japanese Armour Society visited the old museum when it first opened in 2017. I was curious to know what they thought about my collection. They were impressed by its quality and satisfied with the presentation and conservation of the objects. Hearing all the praise form experts around the world made me very happy.

PATRONS: What were the criteria you used to select the pieces in your collection?

Peter Janssen: I evaluate each piece on its artistic and historical qualities and if it’s something that’s still missing in my collection. State of preservation and originality play also a big role.

PATRONS:  Globally, museums are in a time of great transformation. You have created one of the most advanced museums in the world in terms of immersive and educational technology that effectively contributes to education on a topic.
Do you think this experience can serve as a reference for other museums in the             process of renewing their museography?

Peter Janssen: Yes, I think we can serve as a good example for other museums in this respect, although each collection and exhibition is obviously unique in its focus and scope, so technology would have to be implemented differently. It is not an easy task but we were set on making this an immersive experience from the beginning. Since technology is so important in our daily lives, it was very important to me that the museum be a reflection of our times. I also wanted to highlight the collection as best as possible and this seemed the right way to do it. We’re very satisfied with the results and so are our visitors, which is the best we could hope for.

PATRONS: Have you reserved a place of honor for the first Katana with which you started this collection?

Peter Janssen: Yes, the blade is showcased in a central display in the sword and blade section of the museum. I’m still very fond of it.

PATRONS: Have you thought that with the museum’s huge reserve fund you could design a traveling exhibition that would show the wonders of Samurai culture in other countries?

Peter Janssen: In the future we might show parts of the collection in other venues around the world, ideally in cooperation with museums and institutions. For now, we’re all concentrating on making the museum a success here in Berlin. But it’s never bad to have plans for the future.

ALEXANDER JÖCHL, Director Samurai Museum Berlin
‘We are a museum which is very much alive. The interplay of exceptional historical objects and innovative media technology creates diverse, experimental approaches to the myth of the samurai and Japanese culture. Exploring, experiencing, trying out, and understanding are all aspects that intertwine in the Samurai Museum Berlin. We draw on discourses central to current pop culture, themes such as manga, anime, or gaming present exciting opportunities to engage with the subject matter. We want to offer our visitors an active and immersive art experience, which not only grants insight into Japanese culture and history, but also provides links to the present.’

MARTYNA LESNIEWSKA,  Chief Curator Samurai Museum Berlin
‘The curatorial team of the Samurai Museum Berlin examines each exhibit by taking a variety of historical and scholarly sources into account. This way, we are able to expertly embed the themes and objects of the museum into their contexts and present the visitors with detailed interpretations. As chief curator, it is one of my responsibilities to act in accordance with the standards of academic research and prevent any kind of stereotype and one-sidedness, as well as all forms of a Eurocentric approach. Our content is aimed at a broad audience, ranging from children to families to academics, as we wish to appeal to all visitors.’

MICHAEL MONDRIA, Manging Director Ars Electronica Solutions
The creative use of state-of-the-art media technology in the Samurai Museum Berlin facilitates and increases the sensory perception of the artefacts of a bygone culture and philosophy. The technologies that were used to this end, which include laser, dynamic and holographic projections, special media formats, such as gigapixel images and 3D models, open up new contemporary spaces for interpretation. Surprising opportunities for interaction, such as exploring themes via a Japanese folding fan, are not center stage, but rather create an unusual hybrid experience.’