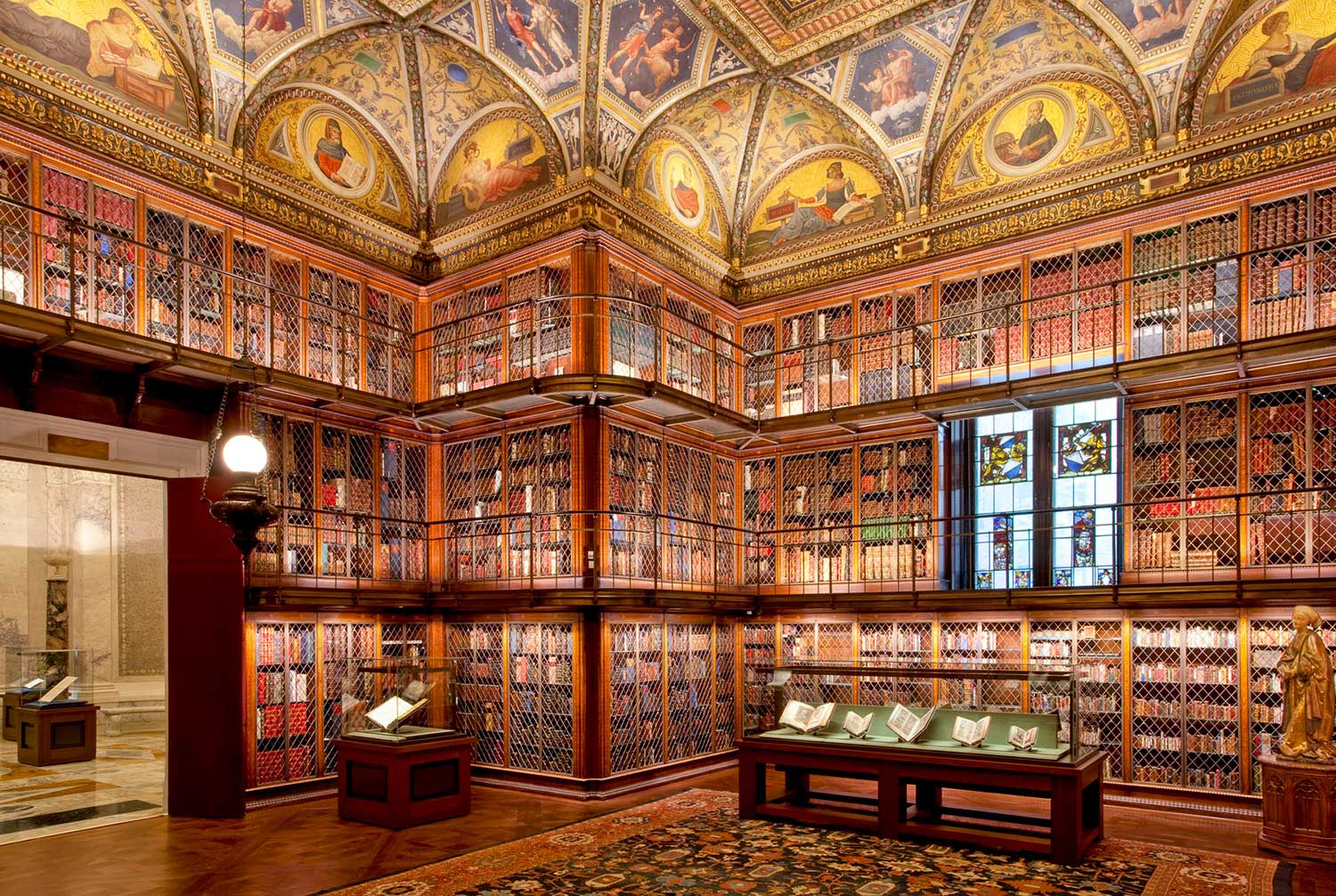 A complex of buildings in the heart of New York City 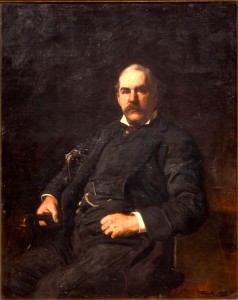 The Morgan Library & Museum began as the private library of financier Pierpont Morgan (1837–1913), one of the preeminent collectors and cultural benefactors in the United States.
As early as 1890 Morgan had begun to assemble a collection of illuminated, literary, and historical manuscripts, early printed books, and old master drawings and prints.

One of the world’s foremost collections

A global institution focused on the European and American traditions, the Morgan houses one of the world’s foremost collections of manuscripts, rare books, music, drawings, and ancient and other works of art. These holdings, which represent the legacy of Pierpont Morgan and numerous later benefactors, comprise a unique and dynamic record of civilization, as well as an incomparable repository of ideas and of the creative process. 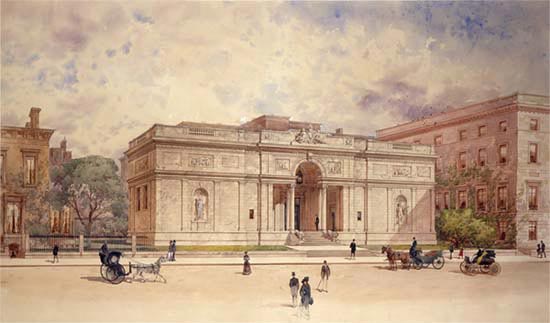 Mr. Morgan’s library, as it was known in his lifetime, was built between 1902 and 1906 adjacent to his New York residence at Madison Avenue and 36th Street. Designed by Charles McKim of the architectural firm McKim, Mead & White, the library was intended as something more than a repository of rare materials.Majestic in appearance yet intimate in scale, the structure was to reflect the nature and stature of its holdings. The result was an Italian Renaissance-style palazzo with three magnificent rooms epitomizing America’s Age of Elegance. Completed three years before McKim’s death, it is considered by many to be his masterpiece.    *Drawing of 1906 wiew of the building

The Library, the East Room 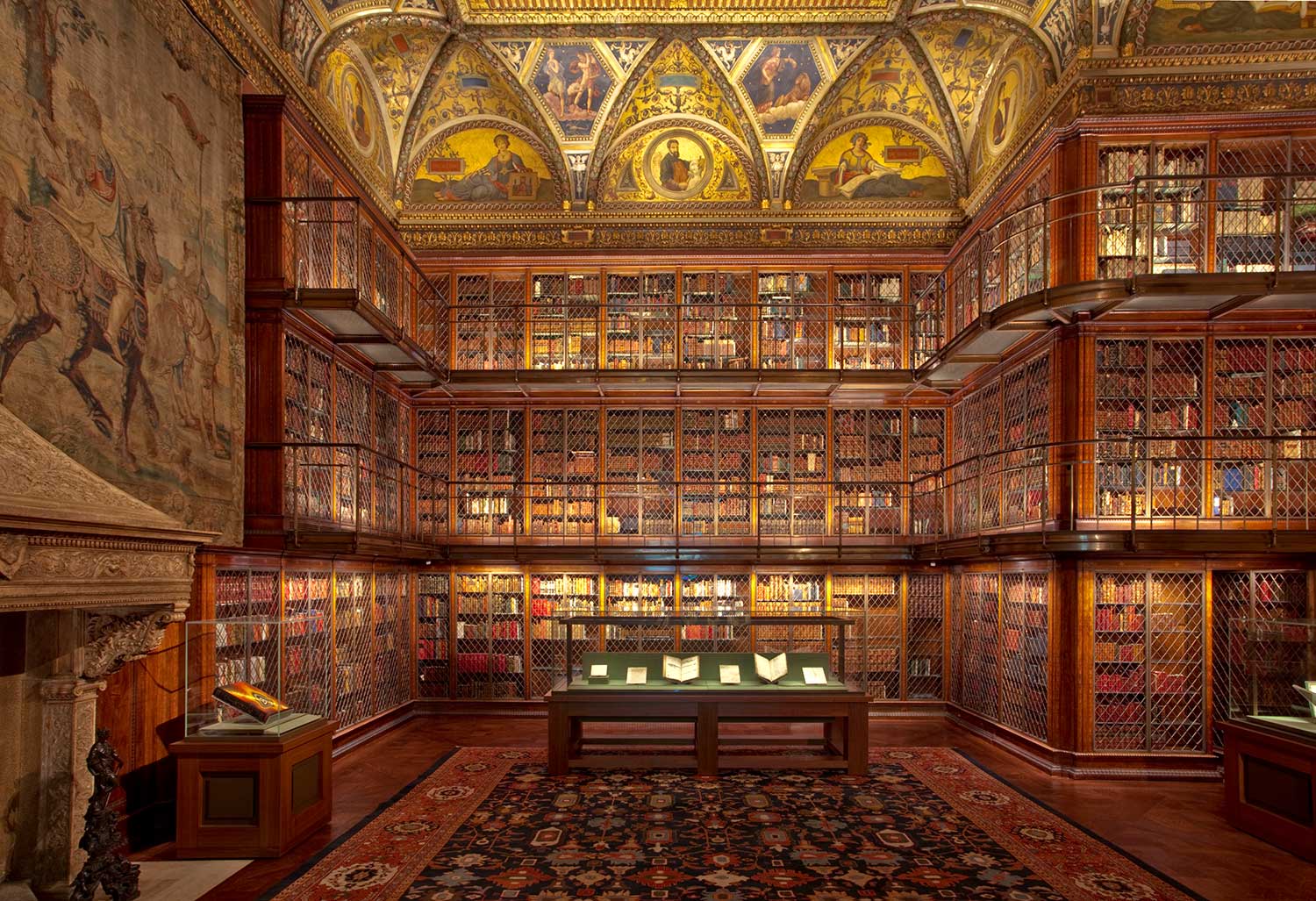 Pierpont Morgan’s stunning library, also known as the East Room, is defined by thirty-foot walls, lined floor to ceiling with triple tiers of bookcases made of inlaid Circassian walnut and featuring volumes of European literature from the sixteenth through twentieth centuries.
Featured on the decorative ceiling by noted muralist Henry Siddons Mowbray (1858–1928) are cultural luminaries of the past, including Socrates, Galileo, Botticelli, and Michelangelo, as well as signs of the zodiac.
Above the room’s grand fireplace is a sixteenth-century tapestry depicting the triumph of Avarice, from a series depicting the Seven Deadly Sins.
Displayed in the library are some of the Morgan’s finest literary and historical manuscripts, medieval and Renaissance illuminated texts, music manuscripts, and printed books and bindings. 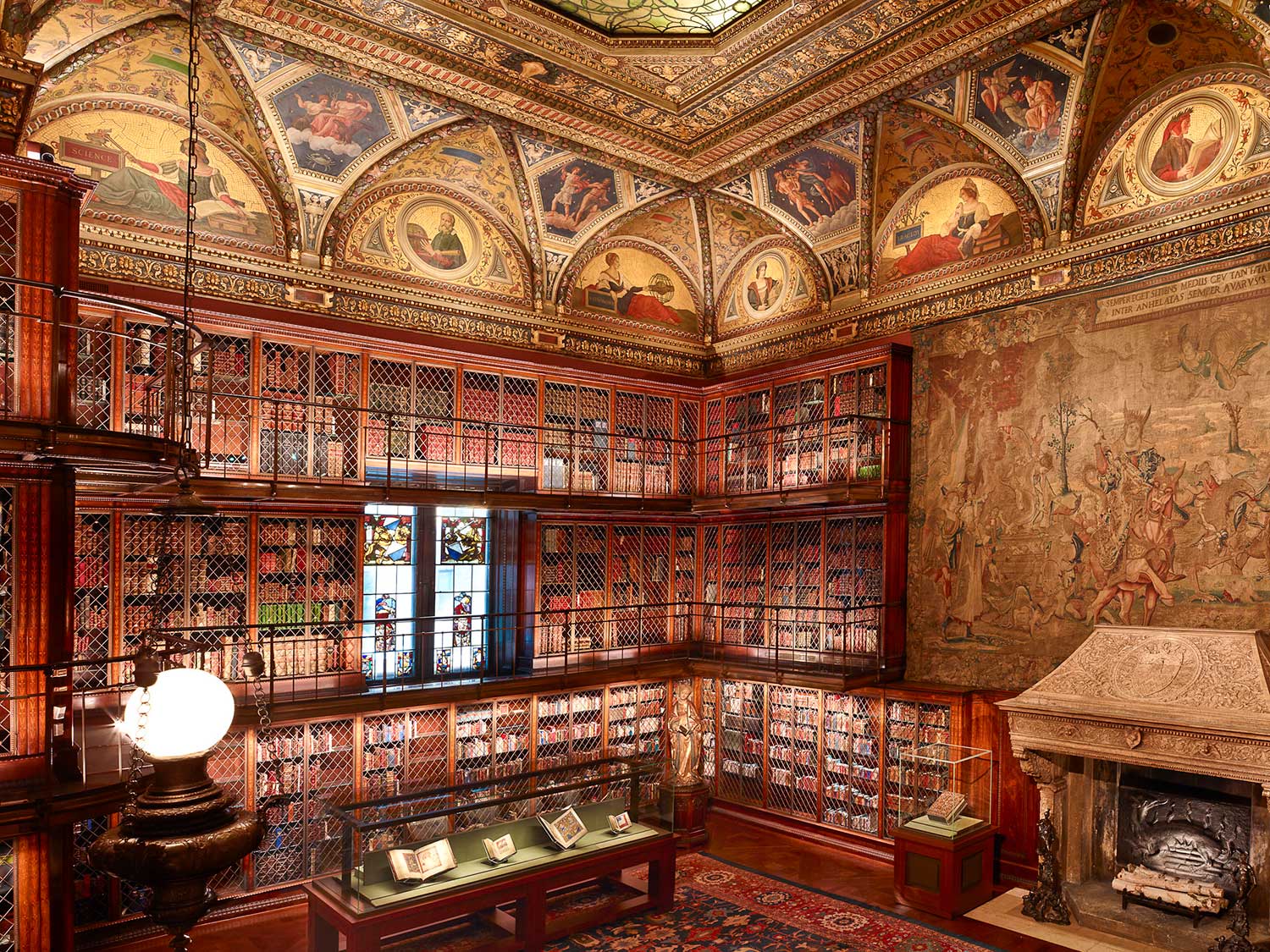 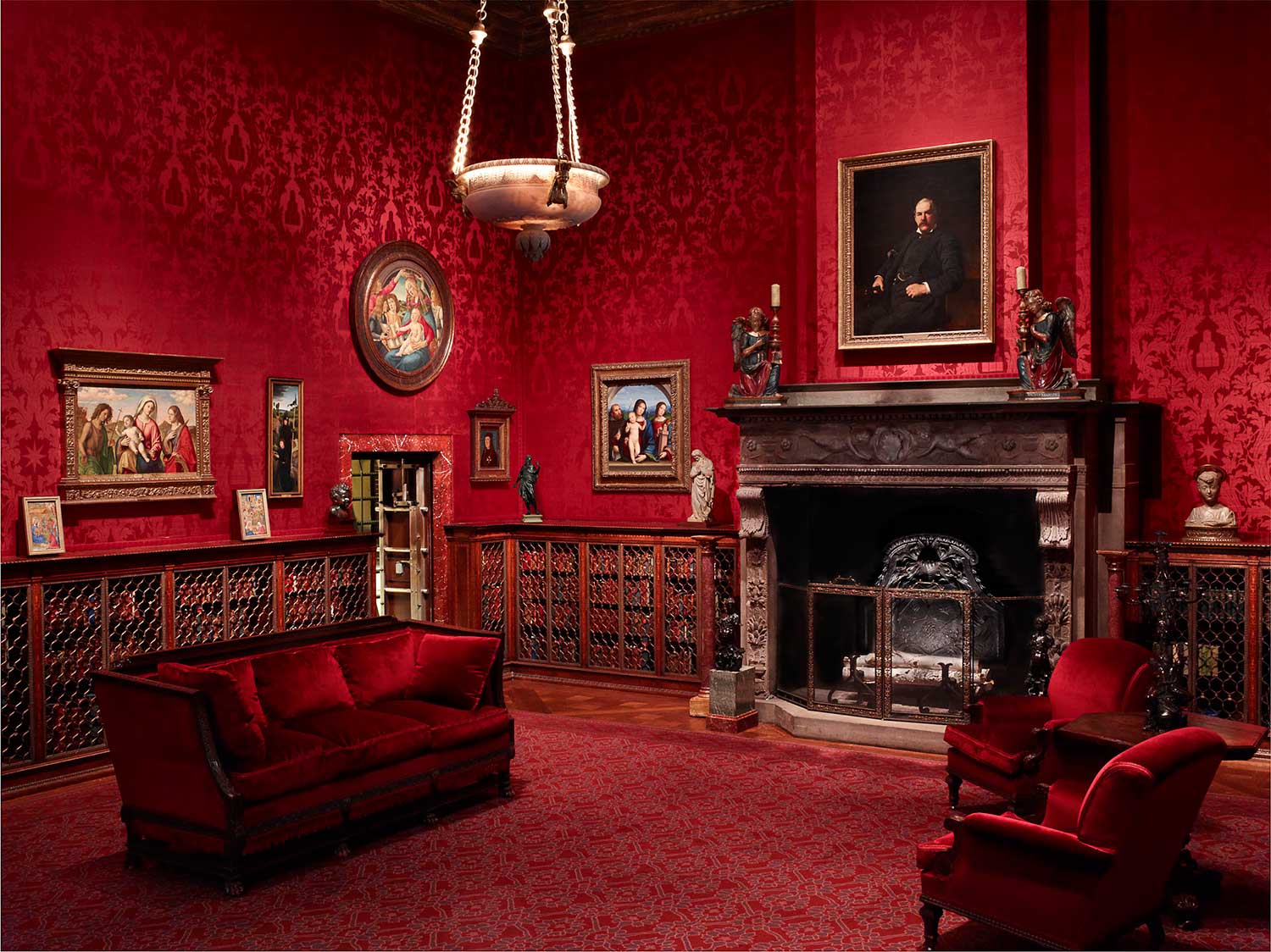 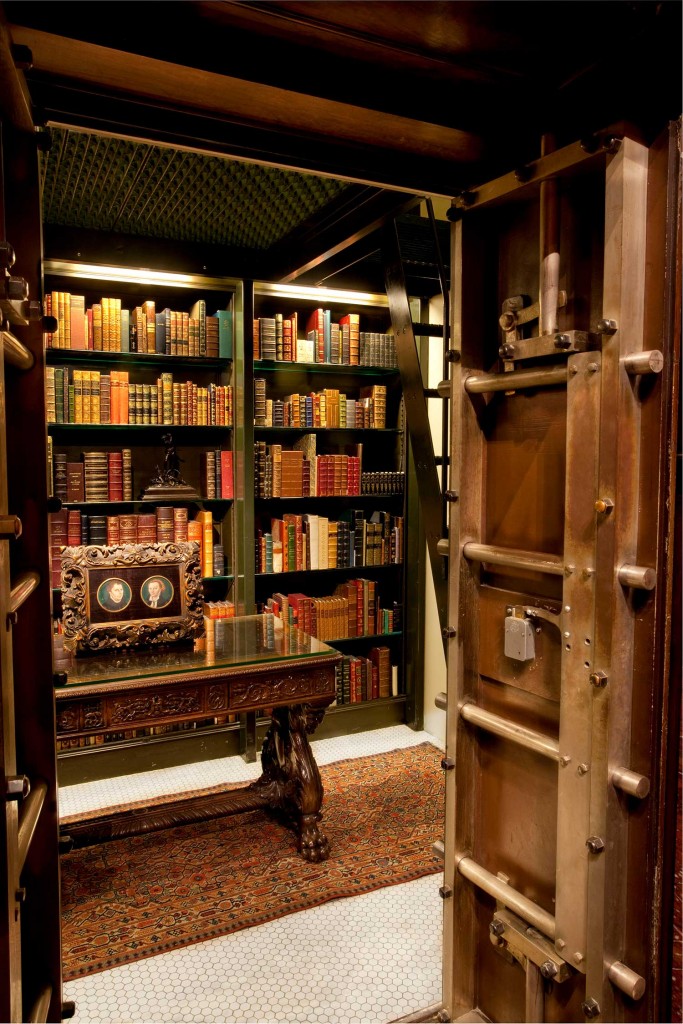 The Renaissance-inspired furnishings of the Study, or West Room, and the pintings, sculpture, and decorative arts displayed reveal the breadth of Pierpont Morgan’s interests and activity as a collector. The room, used by Morgan in the early 1900s for personal business, is defined by its sixteenth-century Florentine coffered wooden ceiling, red silk damask wall coverings patterned after the wall in the Roman palace of famed Renaissance banker Agostino Chigi, and fifteenth- to seventeenth-century stained glass fragments embedded into the windows.

Of especial note in the West Room are paintings by Hans Memling, Francesco Francia, Perugino, and Jacopo
Tintoretto, a bronze St. John the Baptist after Michelozzo, and a 1530 Verrazano globe—one of the earliest known dated globes.

The steel-lined vault in the southeast corner of the room, equipped with a bank vault door and combination lock, is where Pierpont Morgan housed his most valued acquisitions. 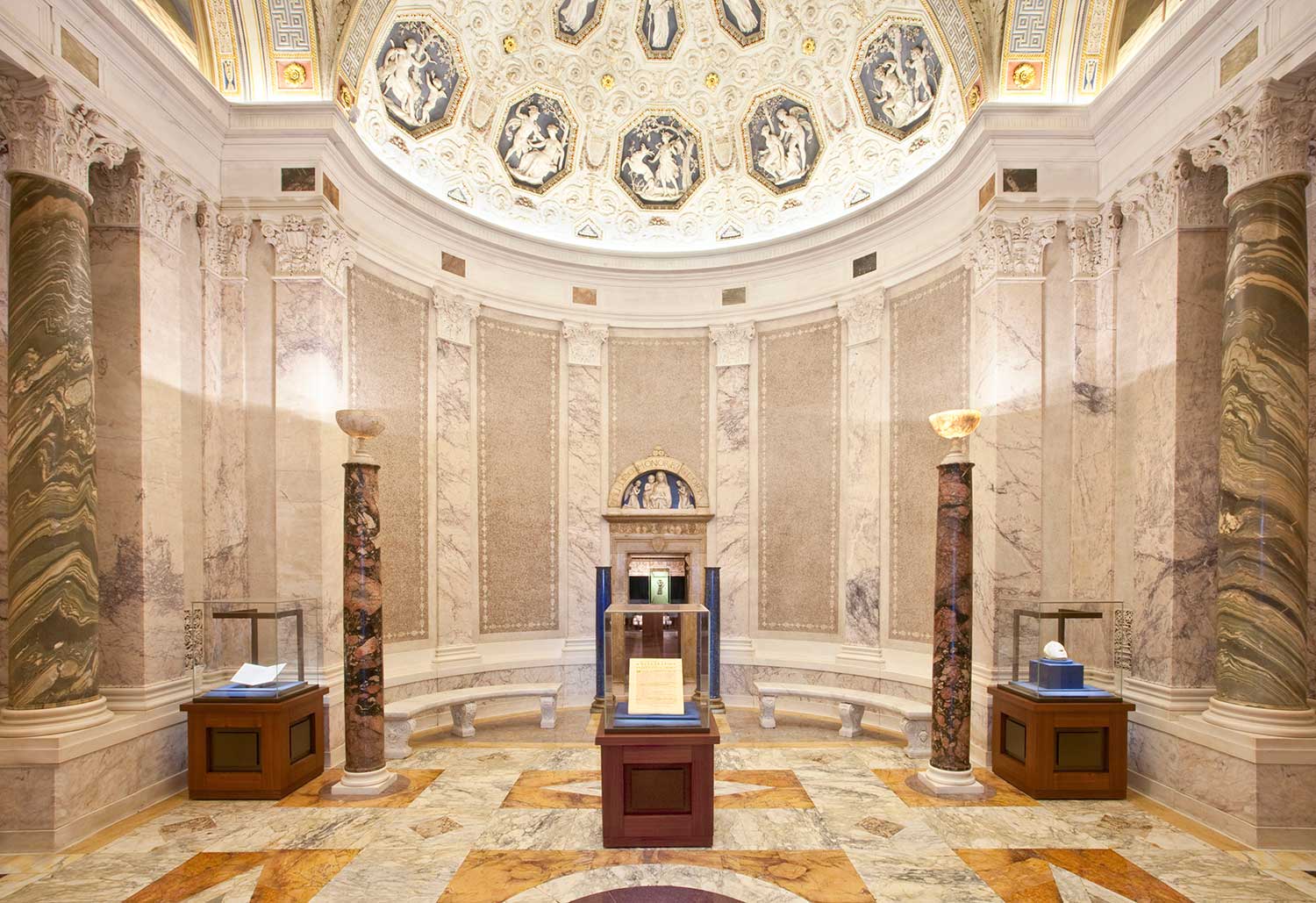 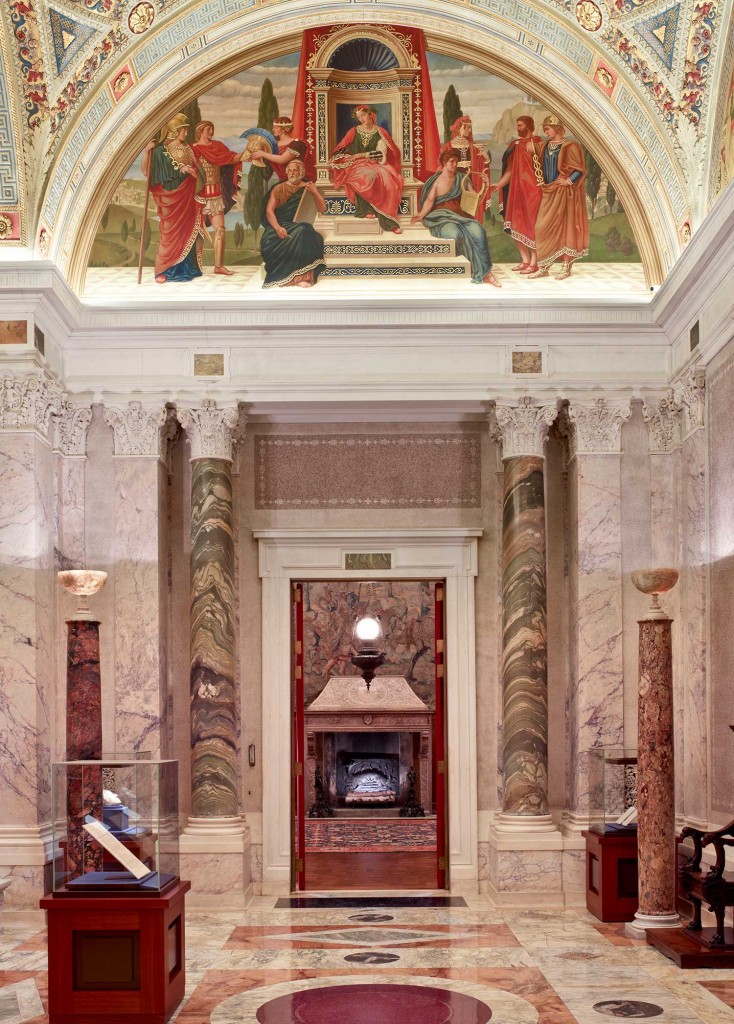 The Rotunda is the dramatic center of the McKim building. Its intricate and elaborately decorated ceiling depicts figures from classical antiquity and the great literary epochs of the past, including Homer, Dante, and Petrarch. The splendor of color and texture is supplied by variegated marble surfaces and columns, mosaic panels and columns of lapis lazuli.

On display in the Rotunda are objects from the Morgan’s outstanding collection of Americana, including such great works as autograph letters by Thomas Jefferson and Abraham Lincoln, a life mask of George Washington, copies of the first Bible printed in America, and the Declaration of Independence. 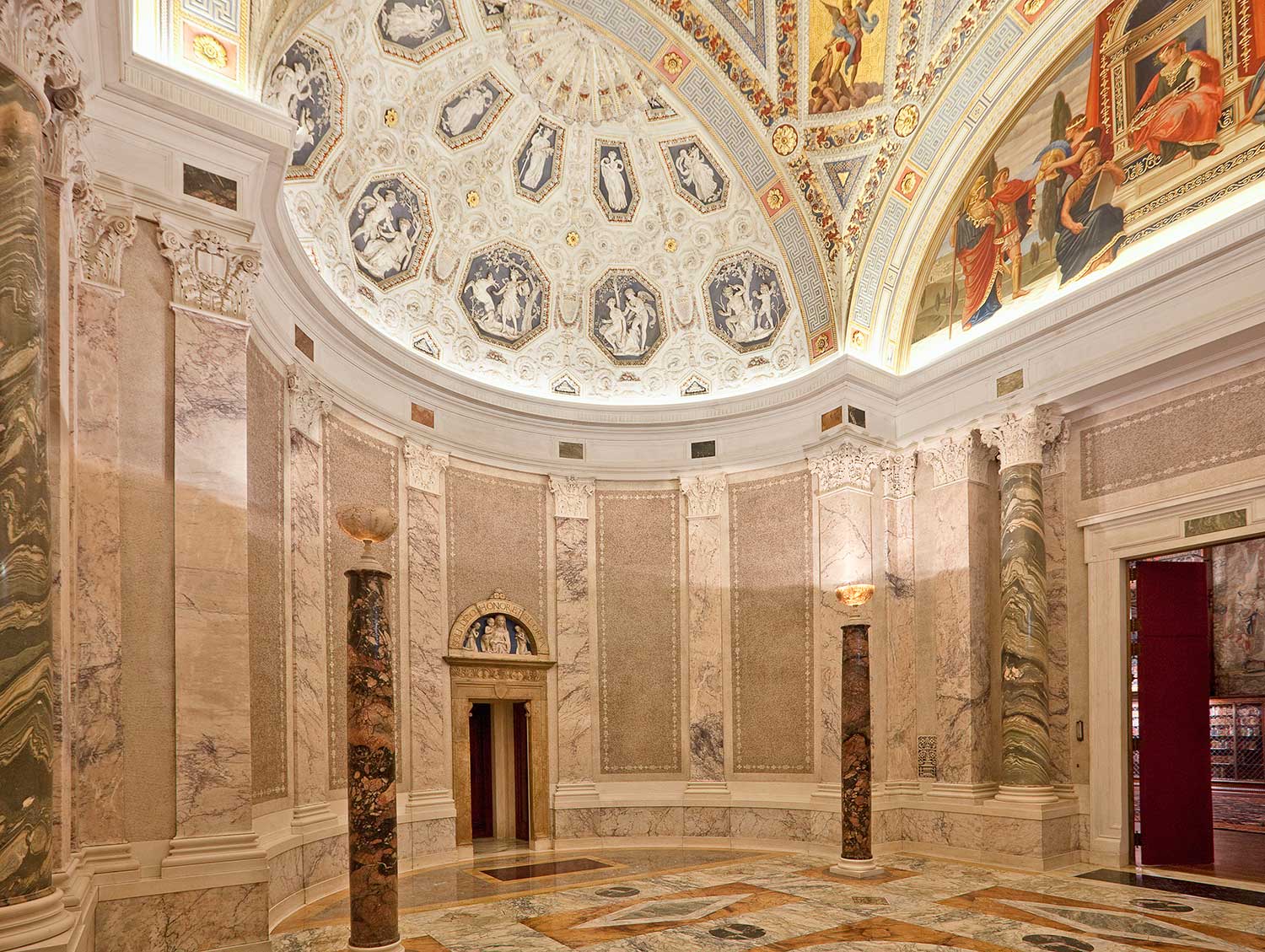 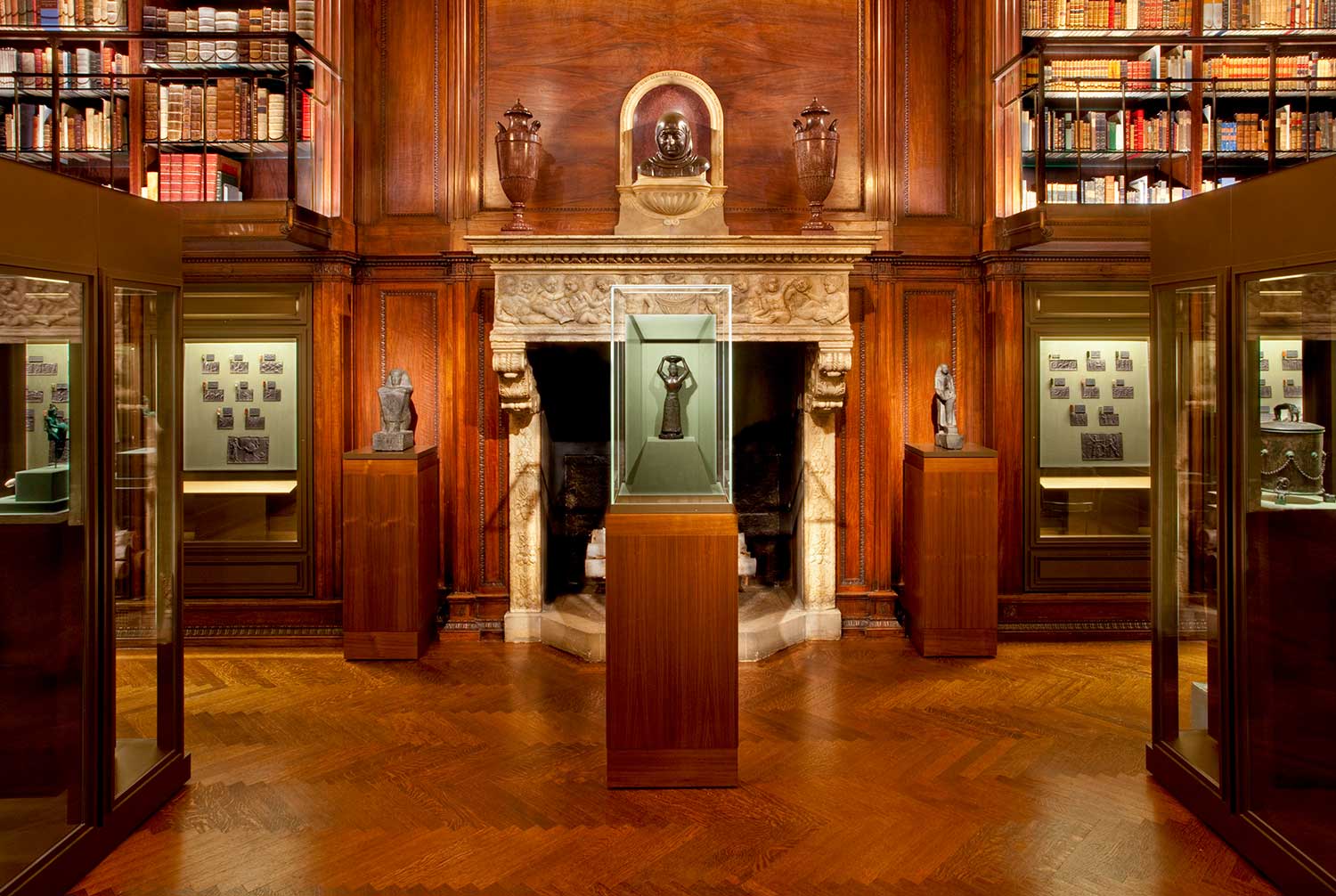 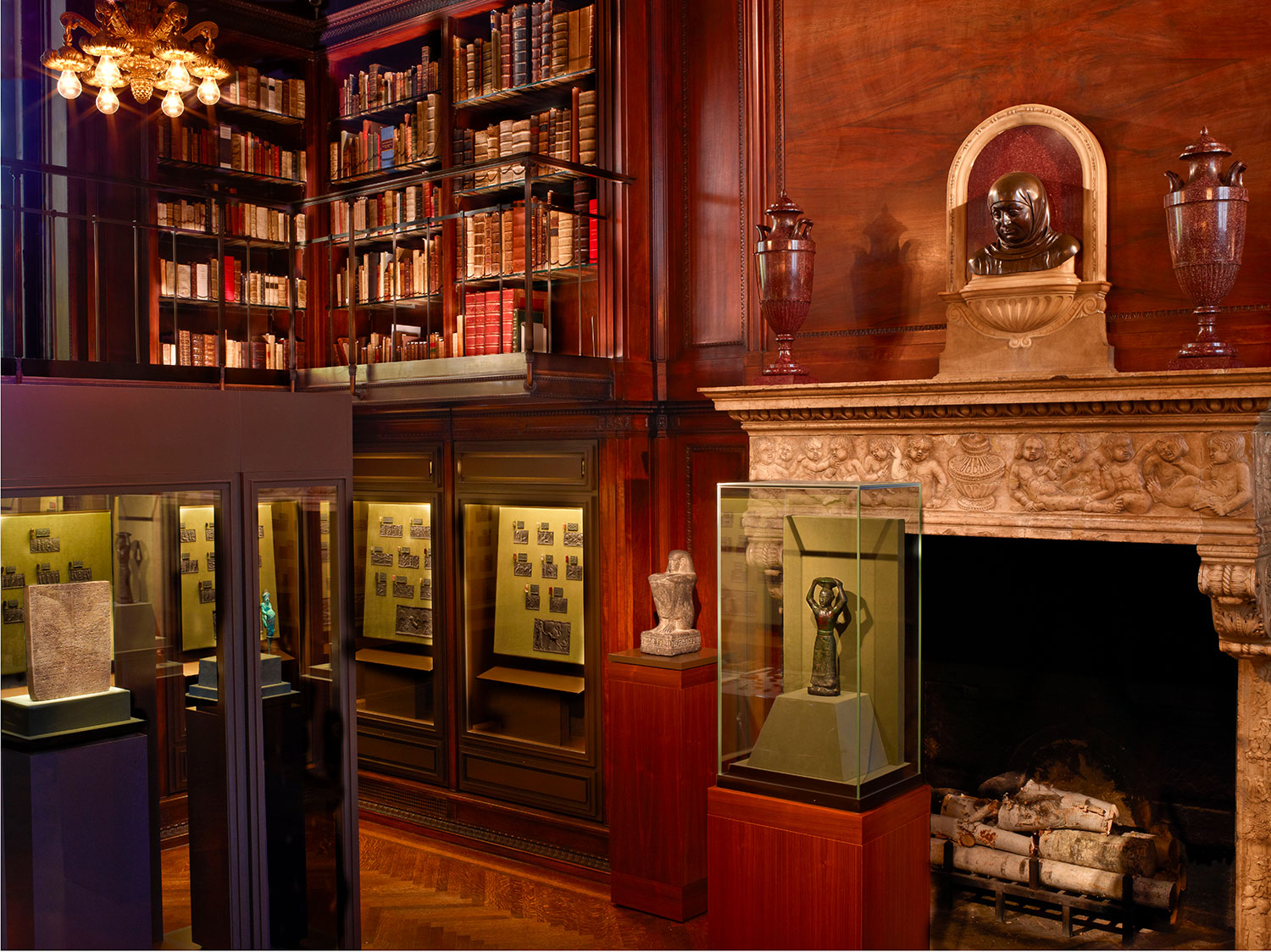 The North Room was once the intimate office of the Morgan’s first director, Belle da Costa Greene. It has been transformed to feature more than 200 of the earliest works in the Morgan’s collection, including objects from the Ancient Near East, Egypt, Greece, and Rome, as well as artifacts from the early medieval period.

The two-tiered room also houses a selection of the Morgan’s notable Ancient Near Eastern cylinder seals, dating from around 3500 BC, the earliest known objects to use pictorial symbols to communicate ideas. 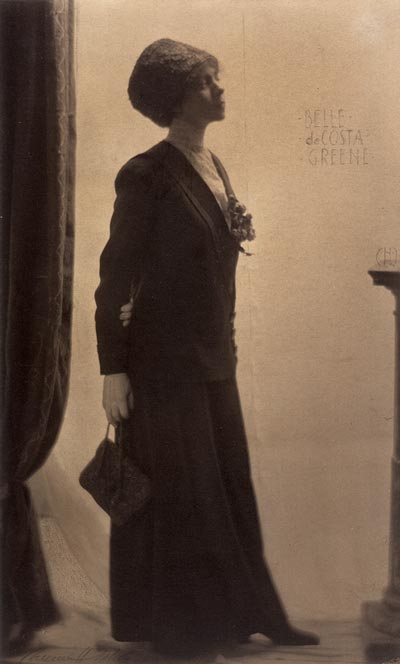 From 1905 Morgan had the able assistance of Belle da Costa Greene, a young librarian from Princeton University. Greene was barely twenty when Morgan hired her, yet her intelligence, passion, and self-confidence eclipsed her relative inexperience. She managed to help build one of America’s greatest private libraries. On a buying trip to London in 1908 she swept up Lord Amherst’s Caxtons in private negotiations the night before they were to be sold at auction, thereby increasing Morgan’s already outstanding Caxton holdings by seventeen.

Greene and Morgan’s nephew, Junius, advised Morgan on his acquisitions of books and illuminated manuscripts. By the time of his death in 1913, he had six hundred volumes—the world’s finest private collection of medieval and Renaissance manuscripts, including the Da Costa Hours (ca. 1515), illuminated by Simon Bening, and the Farnese Hours, illuminated by Giulio Clovio (1546). 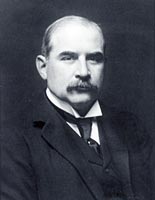 In 1924, eleven years after Pierpont Morgan’s death, his son, J. P. Morgan, Jr. (1867–1943), known as Jack, realized that the library had become too important to remain in private hands. In what constituted one of the most momentous cultural gifts in U.S. history, he fulfilled his father’s dream of making the library and its treasures available to scholars and the public alike by transforming it into a public institution.

In 1928, Pierpont’s son, J.P. Morgan, Jr., built an annex to the McKim with a public gallery devoted to exhibiting highlights from the collections. Over the years, the museum has added the beautiful Morgan brownstone residence to its campus, and in 2006 unveiled an acclaimed expansion by architect Renzo Piano. 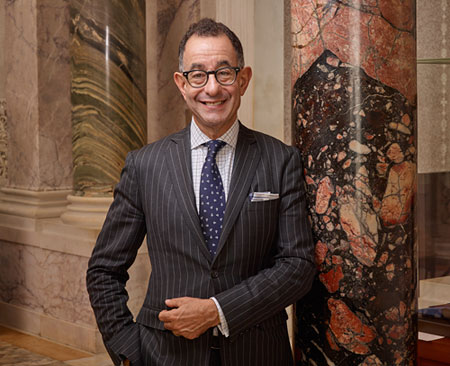 Message from the Director
Colin B. Bailey
Director of The Morgan Library & Museum

To visit the Morgan is to encounter a remarkable range of works that attest to the highest achievement of human creativity—from drawing and literature to music, photography, rare books, and the arts of the ancient and medieval worlds. The collections, some of the greatest of their kind, include superb examples by such masters as Gutenberg, Michelangelo, Mozart, Jane Austen, Mark Twain, Pablo Picasso, Irving Penn, and Georgia O’Keefe. Simply put, there is no other museum like the Morgan in New York.

In addition to serving as a venue for the exhibition of art, literature, and music, the Morgan is an important international research center. The state-of-the-art Reading Room offers direct access to rare source material from the museum’s collections, and the rapidly growing digital archive is used by students and scholars the world over. The Morgan’s Drawing Institute annually hosts visiting fellows and organizes symposia on new scholarship in the drawings field.