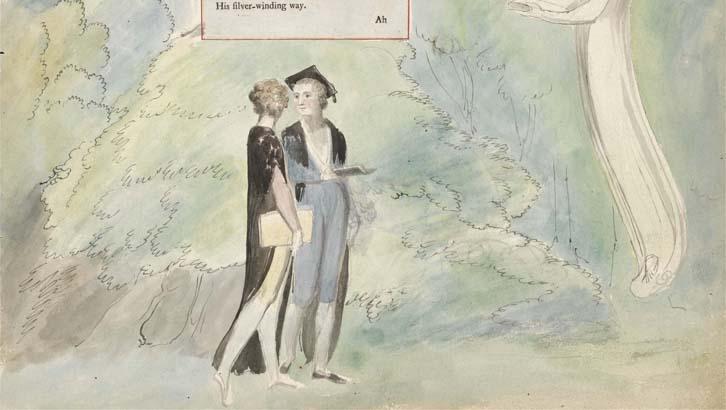 The Yale Center for British Art documents the objects in its collection as part of its mission to make British art accessible to the world, and as a critical service for researchers and scholars. Since the Center opened in 1977, this process has changed dramatically, shifting from film to digital photography. Yet one intriguing challenge remains—capturing an object’s true colors.

“The problem is that these cameras are designed to capture colors the way the brain remembers them, not the way they appear in reality.”
Heumiller, whose expertise ranges from color science to photography, works closely with the Center’s photographers, Richard Caspole and Bernie Staggers, as well as the manufacturers of the Center’s cameras and software. He also shares experiences and techniques with colleagues at the Metropolitan Museum of Art, the Museum of Modern Art, the Getty, and other institutions to ensure that the museum’s digital images reflect the subtleties of the original works.

“The accuracy of reproductions is particularly important when scholars are using them for research.  An artwork reflects a series of decisions made by the artist, and we want to be sure that the digital copy doesn’t misrepresent those decisions,” said Heumiller.

However, even with tried and true methods, high-end equipment, and technical standards, issues can still arise. A few years ago a publisher planned to produce a fine quality copy of William Blake’s watercolor illustrations to The Poems of Thomas Gray. However, some of the test prints appeared to lose their liveliness when compared to the original artwork. Something was wrong with the digital images, but because the difference was so slight it was difficult to say what or why.

As with all works photographed in the Center’s collection, the watercolors had been digitally photographed according to exacting standards, and the digital images had passed quality checks. Upon examination, there didn’t appear to be an obvious problem with any single color in the images—such as one blue appearing different to the camera than to the eye. Nor were there problems like an overall color cast of green or magenta. After further analysis, it was determined that subtle shades present in some of the watercolors, the near-neutrals, colors that are mostly gray or white, with only a hint of hue, such as an off-white or bluish gray, were being desaturated, while the rest of the colors in the images remained unaffected.

This was a problem for William Blake’s illustrations to The Poems of Thomas Gray. For example, a faint blue might be painted next to an aged yellow-gray. When the color was removed from these subtle watercolor washes, they would appear to be nearly the same shade.

To confirm his observations, Heumiller created test targets that illustrated the problem and, working both independently and with the photographers, ruled out potential causes one by one. Ultimately, he provided data and images to the camera manufacturer to demonstrate the issue.

What had caused the problem? Digital cameras (and color film) are typically designed for consumers and professionals to produce visually appealing images. The cameras often make subtle adjustments to color that are invisible to most users. These adjustments are built into the camera software and may be designed to do anything from standardize camera sensors to enhance skin tones in portraiture or to make the colors “pop” in fall foliage landscapes. However, “appealing” is not the same as “accurate,” and this has always been problematic for fine art reproduction.

Art museums try to choose equipment without these features, or systems that permit them to be disabled. However, after conferring with the camera manufacturer, it was determined that even though the Center uses its cameras in a “reproduction mode,” which is supposed to disable these features, the near-neutral color adjustments were still being applied to the digital files. In this instance, the colors in select images had to be readjusted digitally in close consultation with the original Blake watercolors.

The manufacturer asked Heumiller and the Center’s imaging staff, as well as imaging staff from other museums, to evaluate and test an update to the software to prevent this issue moving forward. After over a year of development and testing, the update was recently released. While it was too late to help with this particular project, it is one less issue in color management moving forward, not only for the Center but for any other museum using the same imaging system.

“You never get to the end of color management”

According to Heumiller. “There is no such thing as a perfect reproduction, and we are always trying to get it just a little bit better. It’s like the Greek myth of Sisyphus, who spends an eternity pushing that boulder up a hill. But we enjoy the challenge.”