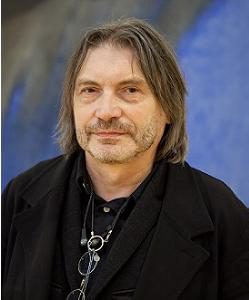 ABOUT KLAUS OTTMANN
Dr. Klaus Ottmann’s career in the visual arts as a curator, critic, academic, and administrator spans more than 30 years. At The Phillips Collection, he oversees the curatorial department and leads the museum’s University of Maryland Center for Art and Knowledge.

He has curated more than 60 exhibitions in Europe and the United States. Recent curatorial projects include:

Karel Appel: A Gesture of Color (The Phillips Collection, June–September 2016)

Dr. Ottmann was curator of the 2006 SITE Santa Fe Biennial and has also curated major exhibitions at other institutions including, among others, the Hirshhorn Museum and Sculpture Garden, Washington, DC; the Los Angeles Museum of Contemporary Art; the Musée d’art moderne et contemporain, Strasbourg, France; and the Schirn Kunsthalle, Frankfurt, Germany.

Previously, Dr. Ottmann held the positions of Robert Lehman Curator at the Parrish Art Museum, Southampton, New York, (2008–2010); Curator of Exhibitions at the American Federation of Arts, New York (1996–1999); and Curator of Exhibitions at the Ezra and Cecile Zilkha Gallery, Wesleyan University, Middletown, Connecticut (1988–1995), where he developed the university’s first course on art theory and curatorial practice.

A recognized scholar on the works of the French artist Yves Klein, Dr. Ottmann translated and published the first volume in English devoted to the artist’s own writings: Overcoming the Problematics of Art: The Writings of Yves Klein (Putnam: Spring Publications, 2007). He is also the author of Yves Klein by Himself: His Life and Thought (Paris: Edition Dilecta, 2010) and Yves Klein: Works, Writings (Barcelona: Ediciones Poligrafa, 2010). He has contributed to numerous other publications on the artist’s work.

Dr. Ottmann’s long list of publications also include books, essays, and articles on a wide range of modern and contemporary artists. He has written extensively for numerous museum publications, including the Tate Liverpool; the Whitney Museum of American Art, New York; the Museu Serralves, Porto; Institut Valencià d’Art Modern, Valencia; and the Kunstmuseum Bonn. He has also contributed to leading periodicals, including Flash Art, Arts, Domus, Art on Paper, Art Press, Sculpture, and ARTnews.

Recognition
In recognition of his significant contributions to furthering the arts, Dr. Klaus Ottmann, has been selected by the French Minister of Culture and Communication to receive the Medal of Chevalier of the Order of Arts and Letters. Created in 1957, the Order of Arts and Letters (_L’Ordre des Arts et des Lettres_) honors notable artists and writers, as well as others who have significantly contributed to furthering the arts in France and around the world.

“I am deeply honored to be named among the distinguished recipients of this award,” SAID DR. OTTMANN. “I am grateful to the French Minister of Culture and Communication Audrey Azoulay and Cultural Counselor Bénédicte de Montlaur for recognizing my contributions to French culture.”

“Throughout his career as a curator, art critic, and scholar, Klaus Ottmann has consistently offered American audiences the opportunity to discover the work of French artists, in particular the work of Yves Klein, of which he is a recognized scholar,” SAID CULTURAL COUNSELOR BÉNÉDICTE DE MONTLAUR. “His work has greatly contributed to the enrichment of French-American cultural exchange.”

The medal ceremony is scheduled to take place on Tuesday, December 20, 2016, at the Cultural Services of the French Embassy in New York.