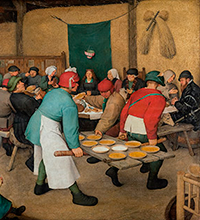 PAINTER. PIETER BRUEGEL the ELDER
KUNST HISTORISCHES MUSEUM WIEN. The first-ever major monograph show dedicated to the greatest Netherlandish painter of the sixteenth century. The exhibition commemorates the 450th anniversary of his death. During his lifetime, Pieter Bruegel the Elder  (c. 1525/30‒1569)  was already among the period’s most sought-after artists. Only about forty paintings and sixty prints by him are all that has come down to us… READ MORE 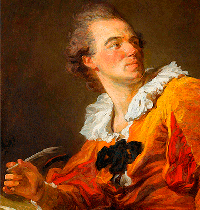 PAINTER. HONORÉ FRAGONARD
“The Fantasy Figures”
NATIONAL GALLERY OF ART. The exhibition presents a series of rapidly masterfully executed, brightly colored paintings of lavishly costumed individuals. For the first time—a newly discovered drawing by Jean Honoré Fragonard (1732–1806) and some 14 of his paintings that have been identified with it including the National Gallery of Art’s Young Girl Reading (c. 1769)… READ MORE 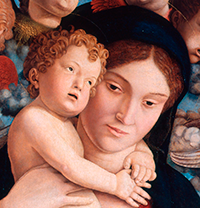 PAINTER. ANDREA MANTEGNA
Mantegna (1431-1506) was one of the most important artists of the Italian Renaissance. He successfully matched his passion for classical antiquity with bold perspective experiments and outstanding realism in his portrayal of the human figure. The exhibition also includes masterpieces by leading Renaissance artists in northern Italy, who were in contact with Mantegna, such as Donatello, Antonello da Messina, Pisanello, Paolo Uccello, Giovanni Bellini, Cosmè Tura, Ercole de ‘Roberti, Pier Jacopo Alari Bonacolsi known as l’Antico, and last but not least, Correggio... READ MORE 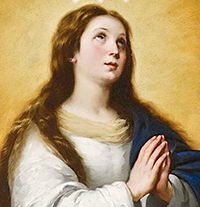 PAINTER. BARTOLOMÉ ESTEBAN MURILLO
MEADOWS MUSEUM. “A 400th Anniversary Celebration”. This exhibition celebrates Murillo by exhibiting the extraordinary holdings at the Meadows together with paintings by his Sevillian contemporaries.
Bartolomé Esteban Murillo was a Spanish painter of the Baroque era. Central personality of the Sevillian school, well known for his religious works, such as those presented in this exhibition at the Meadow Museum… READ MORE 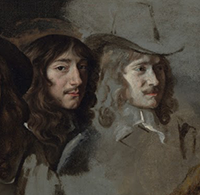 PAINTERS. The Brothers LE NAIN
LEGION DE HONOR. The brothers’ work was rediscovered in the 19th century by such art historians as Champfleury, and influenced many artists including Gustave Courbet and Édouard Manet. The brothers then became famous as “painters of reality,” admired for their deeply sympathetic and affecting portrayals of hard-working men and women. In these paintings, we see smiling field laborers, city beggars with deadpan…  READ MORE 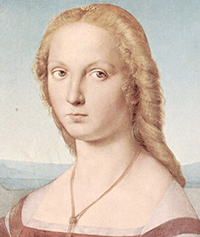 PAINTER. RAPHAEL
CINCINNATI ART MUSEUM. “Lady with a Unicorn” (ca. 1505–1506) features an unidentified blond-haired sitter and epitomizes the beauty of Raphael’s female portraits during his Florentine period. The exhibition will explore the possible identity of this subject, as well as the painting’s distinct iconography, including the unicorn she holds in her lap. Scholars believe that the painting was commissioned to celebrate a wedding, and the unicorn, a conventional symbol of chastity, may offer clues to her familial lineage… READ MORE 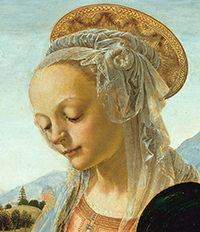 PAINTER. ANDREA DEL VERROCCHIO,
NATIONAL GALLERY OF ART. Verrocchio (c.1435–1488)  as a painter, he formed a direct link in the central chain of Florentine painting between his master, Fra Filippo Lippi, and his own pupil, Leonardo da Vinci. Painting was less his principal focus, and yet he was active and innovative in this field as well. His best-known work is his Baptism of Christ (c. 1472–1474, Gallerie degli Uffizi) made with Leonardo da Vinci, who was still his student and assistant at the time, likely in the early 1470s… READ MORE 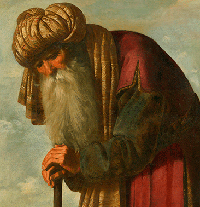 PAINTER. FRANCISCO DE ZURBARÁN
“Jacob and His Twelve Sons, 13 Life-Size paintings from Auckland Castle”
MEADOWS MUSEUM. These life-size portraits, which depict Jacob and his Twelve Sons, are a visual narrative of Jacob’s deathbed act of bestowing a blessing on each son, blessings which foretold their destinies and those of their tribes…  READ MORE 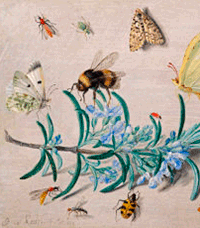 PAINTING. JAN VAN KESSEL,
“Insects and a Sprig of Rosemary”
NATIONAL GALLERY OF ART. Formerly in the collection of Mr. and Mrs. Paul Mellon, the painting is an especially fine example of the artist’s work.The painting depicts a sprig of flowering rosemary surrounded by two butterflies, a bumblebee, a moth, beetles, a cockchafer bug, and several other insects… READ MORE 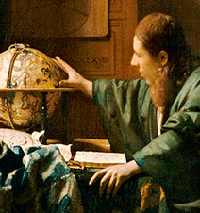 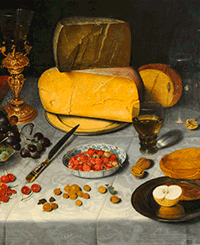 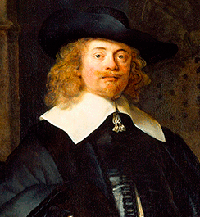 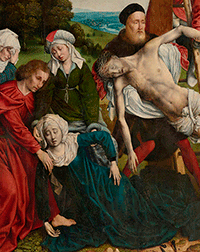 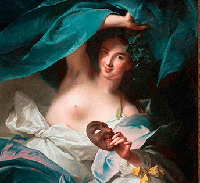 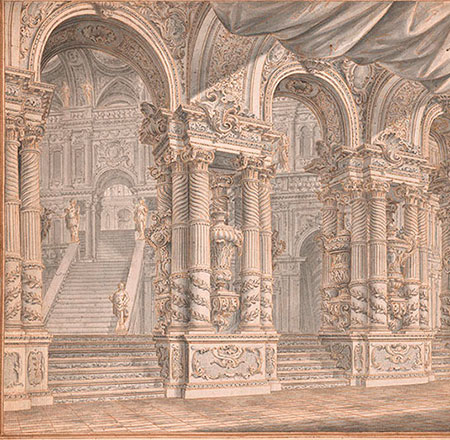 DRAWINGS. BIBIENA Family
Architecture, Theater, and Fantasy
THE MORGAN LIBRARY & MUSEUM. For nearly a century, members of three generations of the Bibiena family were the most highly sought theater designers in Europe. Their revolutionary stage designs were used for operas, festivals, and courtly performances across Europe. From their native Italy to cities as far afield as Vienna, Prague, Stockholm, Saint Petersburg, and Lisbon…READ MORE 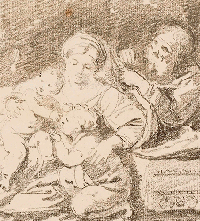 DRAWINGS. JEAN-HONORÉ FRAGONARD
NORTON SIMON MUSEUM. Created by a young Jean-Honoré Fragonard (French, 1732–1806) during his first and most important stay in Italy in the mid-18th century. These exquisite works document Fragonard’s voyage to see the great artistic treasures of Florence, Bologna, and Padua, among other cities… READ MORE 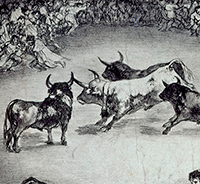 ENGRAVINGS. GOYA
MUSEO LÁZARO GALDIANO. Almost a thousand Goya prints in the Museum.
Throughout his life, José Lázaro Galdiano treasured one of the best and most valuable collections of graphic works by this genius of painting and the most complete ever assembled by a single collector… READ MORE 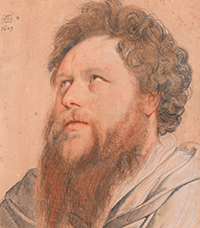 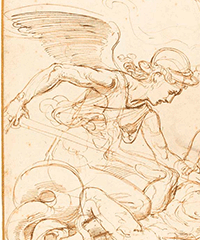 DRAWINGS. RAPHAEL AND HIS CIRCLE
NATIONAL GALLERY OF ART. Raphael and His Circle features 26 prints and drawings by Raphael’s collaborators and followers, and by printmakers who were inspired by him. The exhibition shows from the Gallery’s collection, the complexity, range, and immediate influence of his style as it become the standard for aesthetic excellence in Western art.
ARTISTS: Raphael, Pietro Vannucci, Giulio Romano, Perino del Vaga, Polidoro da Caravaggio, Macantonio Raimondi, Agostino dei Musi, Marco Dente, Ugo da Carpi, Master of the Die… READ MORE 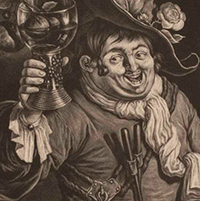 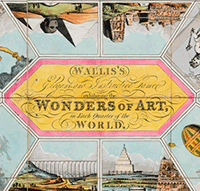 ILLUSTRATIONS. Children’s Games from the Ellen and Arthur Liman Collection, “INSTRUCTION WITH DELIGHT EXHIBITION”
YALE CENTER FOR BRITISH ART. By the turn of the eighteenth century in Britain, parents and teachers had begun to embrace wholeheartedly a suggestion from the philosopher John Locke (1632–1704) that “Learning might be made a Play and Recreation to Children.”  British publishers began offering books and games for “instruction with pleasure” of which 20 are presented in this post… READ MORE 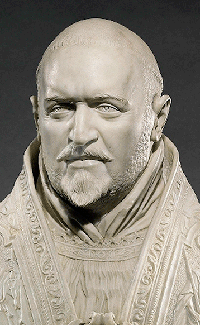 SCULPTOR. GIAN LORENZO BERNINI
Timothy Potts, director of the J. Paul Getty Museum, says: Bernini was the towering genius of his age, acknowledged in his lifetime and ever since as the most versatile, inventive, and talented sculptor since Michelangelo.
Anne-Lise Desmas, head of Sculpture and Decorative Arts at the Getty Museum  said: Bust of Pope Paul V exemplifies Bernini’s precocious mastery in capturing his sitters’ characters and in conveying a powerful liveliness of expression. Beyond its extraordinary naturalism, the sculpture manages to combine a gravitas appropriate to the Pope’s status with an air of kindness and approachability. In addition, the rich embroidery decoration of the cope is technically a tour de force in low-relief carving. Remarkably, the portrait survived through all these centuries in perfect condition… READ MORE 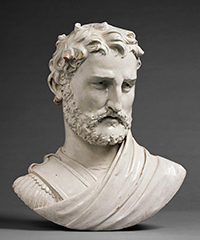 SCULPTORS. DELLA ROBBIA, Family of artists sculpting with Color in Renaissance Florence
NATIONAL GALLERY OF ART. More than 500 years after their creation, Della Robbia terracotta sculptures endure as some of the most innovative and expressive examples of art from the Italian Renaissance.Even today the ceramics retain their signature opaque whites, deep cerulean blues, and lively greens, purples, and yellows, due to the glazing technique invented by sculptor Luca della Robbia (1399/1400–1482)… READ MORE 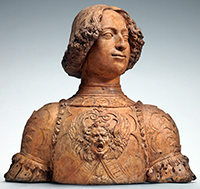 SCULPTOR. ANDREA del VERROCCHIO (c.1435–1488)
NATIONAL GALLERY OF ART. As a sculptor, Verrocchio was the most important figure in Renaissance art between Donatello and Michelangelo, making works of unprecedented technical accomplishment and breathtaking naturalism and beauty. By the time he was about 30 years old, Verrocchio had emerged as a master of the first rank and the Medici began to entrust him to make the most important bronze sculptures in the city: first, around 1465, a statue of David with the Head of Goliath, made as a kind of complement to or rival of Donatello’s earlier bronze of the same subject… READ MORE 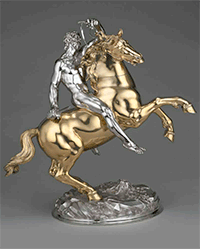 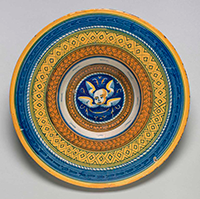 CERAMICS and BRONZE
Renaissance Prints into Maiolica and Bronze
NATIONAL GALLERY OF ART. 90 objects to highlight the impact of Renaissance prints on maiolica and bronze plaquettes. It traces the metamorphosis that designs by Andrea Mantegna, Antonio del Pollaiuolo, Raphael, Michelangelo, Parmigianino, and Albrecht Dürer, among others, underwent across these different media. Arranged chronologically, this exhibition is inspired by the acquisition of the William A. Clark maiolica collection from the Corcoran Gallery of Art and draws largely on the Gallery’s newly expanded holdings of early Italian prints (founded on the Lessing Julius Rosenwald gift and augmented by recent acquisitions), as well as on the world-renowned Samuel Henry Kress collection of plaquettes and medals… READ MORE 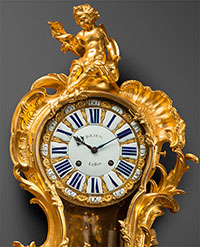 CLOCKS. The Louis XV Clock and the Rococo style
The Rococo style is a purely French style, it takes nothing from ancient art. It is light, lively, seductive, messy, but always graceful.
From the majestic and imposing Baroque, typical of the reign of Louis XIV (1643-1715), created in the service of the absolutist monarchy, one passes abruptly to the delicate and easy rococo of the Louis XV style, a style that is at the service of the aristocracy and the bourgeoisie, where the artist can carry out his works with more freedom… READ MORE 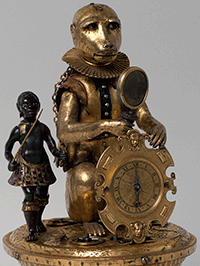 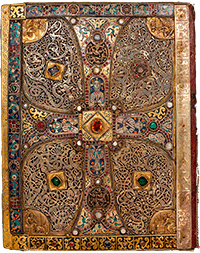 BOOKS. Treasure bindings
THE MORGAN LIBRARY & MUSEUM. Were a luxury in the Middle Ages. Few survive, and some of the finest examples are in the Morgan’s distinguished collection. Among the exhibition highlights will be the ninth-century Lindau Gospels, one of the two finest Carolingian jeweled bindings in the world, and the thirteenth-century Berthold Sacramentary, the most luxurious German manuscript of its time…READ MORE 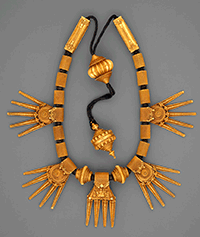