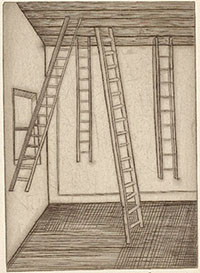 PAINTER. LOUISE BOURGEOIS
NATIONAL GALLERY OF ART. The Exhibition “No Exit” will present key early works, including three pen drawings (1947–1950) that evoke the cascading rivers and mountain peaks of Aubusson, the tapestry-producing region of France and home to Bourgeois’s mother’s family.
Other highlights include the artist’s psychologically charged print project, He Disappeared into Complete Silence (1947)—a work that signals the…READ MORE 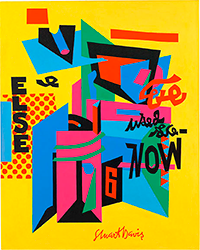 PAINTER. STUART DAVIS
FINE ARTS MUSEUMS OF SAN FRANCISCO. Related works from different periods of the artist’s career will be installed alongside one another, reflecting Davis’s tendency, beginning in the late 1930s, to appropriate and rework his own earlier compositions; this will be the first major exhibition to do so. The presentation also will include Davis’s kinetic compositions, which evoke the excitement, speed, and turbulence of the age, and continue to feel fresh and resonant today… READ MORE 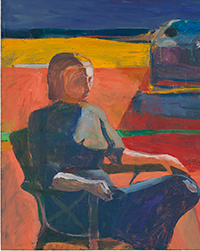 PAINTER. RICHARD DIEBENKORN
SAN FRANCISCO MUSEUM OF MODERN ART. Exceptional paintings and drawings on view from Diebenkorn’s representational period (1955–1967) illustrate the artist’s shift from abstraction towards identifiable subject matter—still lifes, interiors, city scenes and figural works—and will be presented with some of Matisse’s own compositions that were of particular relevance. Pairings that reveal the importance of Matisse’s example throughout this period… READ MORE 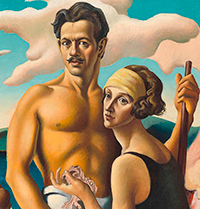 PAINTER. THOMAS HART BENTON
“In Hollywood”
NELSON-ATKINS MUSEUM of ART. The Exhibition Explores Cinematic Themes, includes approximately 100 works by Benton: 50 paintings and murals along with a selection of his drawings, prints and illustrated books. In addition, throughout this exhibition, Benton’s art is paired with historic movie clips. These pairings present opportunities to explore how both Benton and… READ MORE 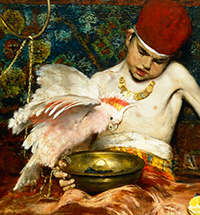 PAINTER. WILLIAM MERRITT CHASE
The PHILLIPS COLLECTION. William Merritt Chase was an innovative painter, and an influential teacher. Marking the centennial of his death, this retrospective—the first in more than three decades—explores the interrelationships in Chase’s work across subject and media… READ MORE 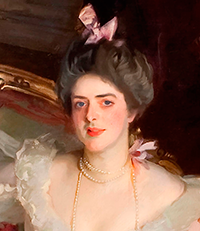 PAINTER. JOHN SINGER SARGENT
“Portrait of Mrs. Carl Meyer and her Children”
THE JEWISH MUSEUM of New York. The portrait is contextualizing it with other family portraits, ephemera, documents, personal correspondence, and caricatures. On loan from the Tate Britain, it has been over ten years since the painting was on view in the United States. The work depicts Adèle Meyer, a wealthy British philanthropist, well-known society hostess, and political activist, with her children… READ MORE 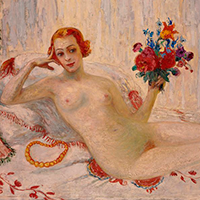 PAINTER. FLORINE STETTHEIMER
JEWISH MUSEUM of New York. The Exhibition “Painting Poetry“ are drawn from all periods of the artist’s life, with Head of a Girl (1887-88), a pencil drawing Stettheimer made when she was just 16 years old, being one of the earliest works on view. Offers a timely reconsideration of this influential American artist with a sharp satirical wit, placing her centrally in the modern dialogue of high and mass culture…  READ MORE 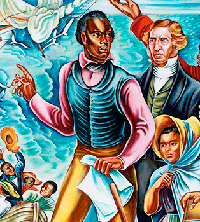 PAINTER. HALE WOODRUFF
“Murals at Talladega College”
NELSON-ATKINS MUSEUM of ART. In 1938, Talladega College President Buell Gallagher commissioned Hale Woodruff the two cycles of murals, The Mutiny on the Amistad and The Founding of Talladega, are vibrant depictions of events symbolizing the centuries-long African American struggle for civil rights. These exceptional paintings have just been restored and are on a one-time national tour before returning to their permanent home in Alabama… READ MORE 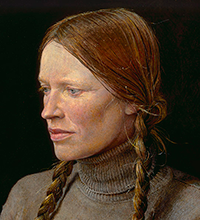 PAINTER. ANDREW WYETH
“In Retrospect”
SEATTLE ART MUSEUM. Major exhibition presents through 110 paintings and drawings, radical reimagining of one of the 20th century’s most complicated artists. “In Retrospect” reflects on Wyeth’s work through the historical lens of a century in which he deviated from the American art mainstream but continued to figure prominently in much… READ MORE 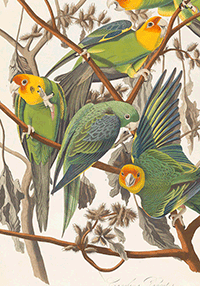 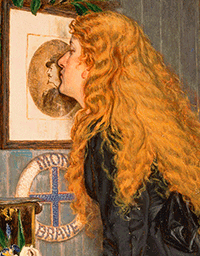 PAINTERS. American Pre-Raphaelite Art influenced by JOHN RUSKIN
NATIONAL GALLERY OF ART. In celebration of the 200th anniversary of the birth of John Ruskin (1819–1900), the most influential art critic of the Victorian era, the National Gallery of Art will present more than 80 paintings, watercolors, drawings, and photographs created by American artists who were profoundly influenced by the renowned critic… READ MORE 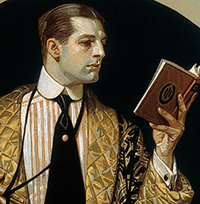 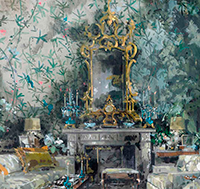 ILLUSTRATOR. JEREMIAH GOODMAN
“Inspired interiors”
THE GALLERY AT 200 LEX, New York. The exhibition chronicles Jeremiah Goodman’s life and work, drawing on paintings and photographs taken from his own extensive archive. More than mere illustrations, his paintings interpret and inspire, conveying how a space is experienced through the eyes of an artist. Simply put, Jeremiah’s work comprises the best record of America’s greatest interiors… READ MORE 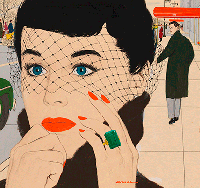 ILLUSTRATOR. MAC CONNER
“The Original Mad Man”
DELAWARE ART MUSEUM. His work is a “time capsule” of an era when commercial artists helped to redefine American style and culture. This comprehensive and lively installation explores the work of one of America’s original “Mad Men.” McCauley (“Mac”) Conner (born 1913) created advertising campaigns for a variety of products during the decade when the advertising industry was at its height and centered on Madison Avenue…  READ MORE 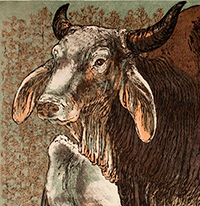 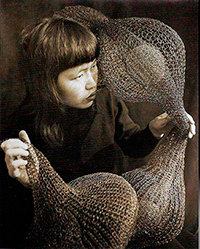 SCULPTOR. RUTH ASAWA
It was at Black Mountain that Asawa began to explore wire as a medium, inspired by a 1947 trip to Mexico during which local craftsmen taught her how to loop baskets out of this material.
Gallery owner David Zwirner said: “Intricate, dynamic, and sinuous, these remarkable works, begun in the late 1940s, continue to challenge conventional notions of sculpture through their emphasis on lightness and transparency. “I think her story, if properly told, should afford her a place amongst the great artists of the twentieth century”… READ MORE 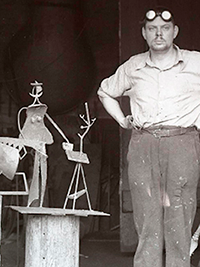 SCULPTOR. DAVID SMITH
Smith’s hands-on approach – he worked directly with his materials, insisting that sculpture should be unique rather than produced by artisans in editions – and his emphasis upon the visual nature of sculpture, helped elevate the medium to a level of authenticity that had largely been the exclusive domain of drawing and painting. Works by David Smith reside in scores of major museum collections worldwide. The Museum of Modern Art and The Whitney Museum of American Art, New York NY; The Tate Gallery, London, England; and the National Gallery of Art, Washington, are a few of the institutions that have comprehensive collections of Smith’s work…READ MORE 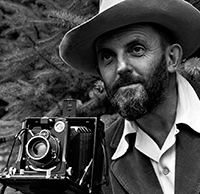 PHOTOGRAPHER. ANSEL ADAMS
Anselm Easton Adams was born in San Francisco (California, USA) on February 20, 1902. Adams became a professional photographer thanks to Yosemite. In the 1930s, Ansel Adams was in great demand and constantly travelled around the country to meet his assignments. He was awarded with the Guggenheim Fellowship (1946), the Presidential Medal of Freedom (1980) from President Carter, and the Hasselblad Award (1981) from the King and Queen of Sweden…READ MORE 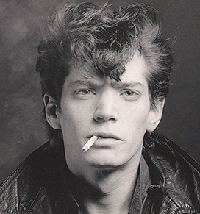 PHOTOGRAPHER. ROBERT MAPPLETHORPE
GETTY CENTER. The exhibition The Perfect Medium is co-organized by LACMA and the J. Paul Getty Museum. In a historic collaboration, the two institutions will trace the artist’s working methods and materials, presenting the improvisational, experimental aspects of his practice alongside the refined perfection of his prints. The works on display provide new context for … READ MORE 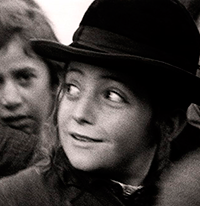 PHOTOGRAPHER. ROMAN VISHNIAC
THE PHOTOGRAPHERS’ GALLERY of New York and JEWISH MUSEUM LONDON. Vishniac has created the most extraordinary graphic document of Jewish life before the Holocaust. He said: “I was living in Germany in the thirties, and I knew that Hitler had made it his mission to exterminate all Jews, especially the children and the women who could bear children in the future. I was unable to save my people, only their memory”… READ MORE 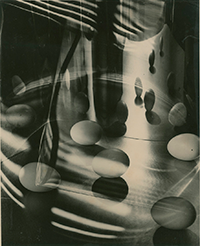 PHOTOGRAPHER. CARLOTTA CORPRON
MEADOWS MUSEUM. Carlotta Corpron (1901-1988) was deeply rooted in Texas but heavily informed by European and other global influences. Corpron taught art at Texas universities and employed highly experimental methods in her photography. Corpron taught at Texas State College for Women (now Texas Woman’s University) from 1935 to 1968, and developed an innovative, abstract style of photography that portrayed everything from eggshells to scraps of paper to the midway rides at the State Fair of Texas. The subject of solo exhibitions at the the Dallas Museum of Fine Arts (now the Dallas Museum of Art), The Art Institute of Chicago, and …. READ MORE 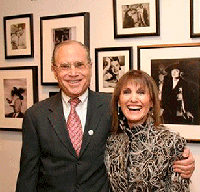 COLLECTORS. RICHARD AND ELLEN SANDOR COLLECTION
For over 30 years Richard and Ellen Sandor have been collecting photographs until gathering one of the best private collections on photographic art in the United States, with more than 2,000 works from the 1840s to the present. In 1988, 2001, and 2002, the Sandors appeared in the “Top 100” list of American Private Collectors…READ MORE 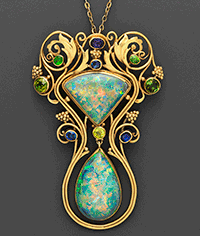 JEWELRY. BOSTON MADE
“Arts and Crafts Jewelry and Metalwork”
MUSEUM OF FINE ARTS, BOSTON. Frank Gardner Hale and His Circle In the early 20th century, Boston boasted one of the most active and influential jewelry-making and metalworking communities in the nation. This is the first exhibition exclusively dedicated to the exemplary works of this vibrant and interwoven group of craftspeople… READ MORE 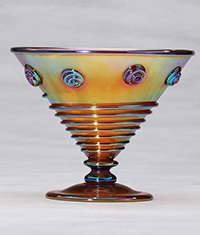 GLASS: “Unexpected Color. A Journey Through Glass”
NEWARK MUSEUM. The exhibitions showcases more than 130 works in glass designed by Frederick Carder for the famed Steuben Glass Works from 1903 to 1933 and used in a variety of settings by the collector Thomas N. Armstrong III. The exhibition presents a jewel box of shimmering glass, organized by Carder’s colors that he created and patented. Carder was fascinated with ancient glass colors and forms… READ MORE 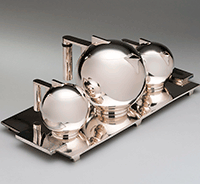 ART DECO. “American Style in the 1920s”
THE CLEVELAND MUSEUM OF ART. The first major museum exhibition to focus on American taste in art and design during the 1920s and early 1930s.  More than 300 works, explore America’s cultural coming of age through an exuberant selection of jewelry, fashion, paintings, decorative arts and motorcars…  READ MORE 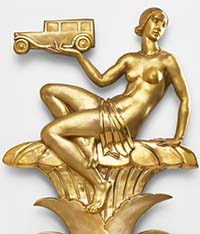 ART DECO. “Luxury to Mass Market”
THE WOLFSONIAN. Instead, it is the result of a search by designers and artists for ornament that was suited to modern times. Inspired by many sources and resulting in different stylistic outcomes, Art Deco flourished in Europe in the 1920s and quickly spread around the world. In the United State…READ MORE