Through January 7, 2018
The MORGAN LIBRARY & MUSEUM 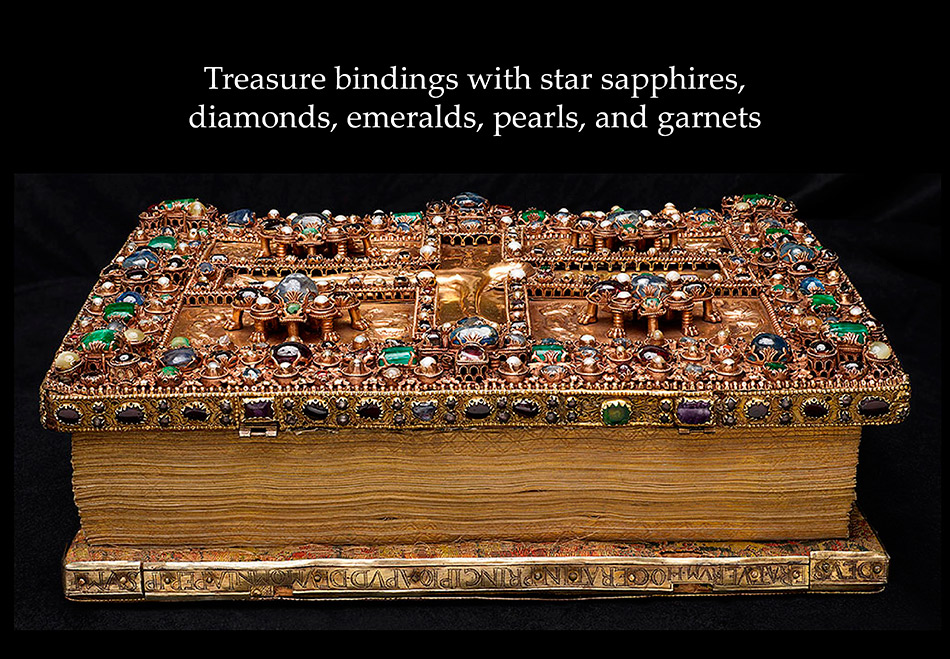 Treasure bindings, were a luxury in the Middle Ages.
Few survive, and some of the finest examples are
in the Morgan’s distinguished collection

Among the exhibition highlights will be the ninth-century Lindau Gospels, one of the two finest Carolingian jeweled bindings in the world, and the thirteenth-century Berthold Sacramentary, the most luxurious German manuscript of its time. In these and other examples, we learn that the application of gemstones and precious metals served to venerate the texts inside and embellish church services, as well as reflect the status and wealth of the patrons who commissioned them.

Images of “imagined” gems are also featured on the pages of manuscripts and printed books presented, including three examples of Venetian books, hand-painted by Girolamo da Cremona.  The artist’s frontispieces to Augustine’s City of God (1475), Plutarch’s Parallel Lives (1478), and Aristotle’s Opera (1483) are masterpieces of trompe-l’oeil. The last has been called the “most magnificent printed book in the world.”

Jeweled Cover of the Lindau Gospels

ca. 875. Gold repoussé Crucifixion and ten mourning figures, including personifications of the sun and moon. Workshop of Charles the Bald, grandson of Charlemagne. In Latin; Switzerland, Abbey of St. Gall, between 880 and 899. Manuscript on vellum. Purchased by J. Pierpont Morgan, 1901. 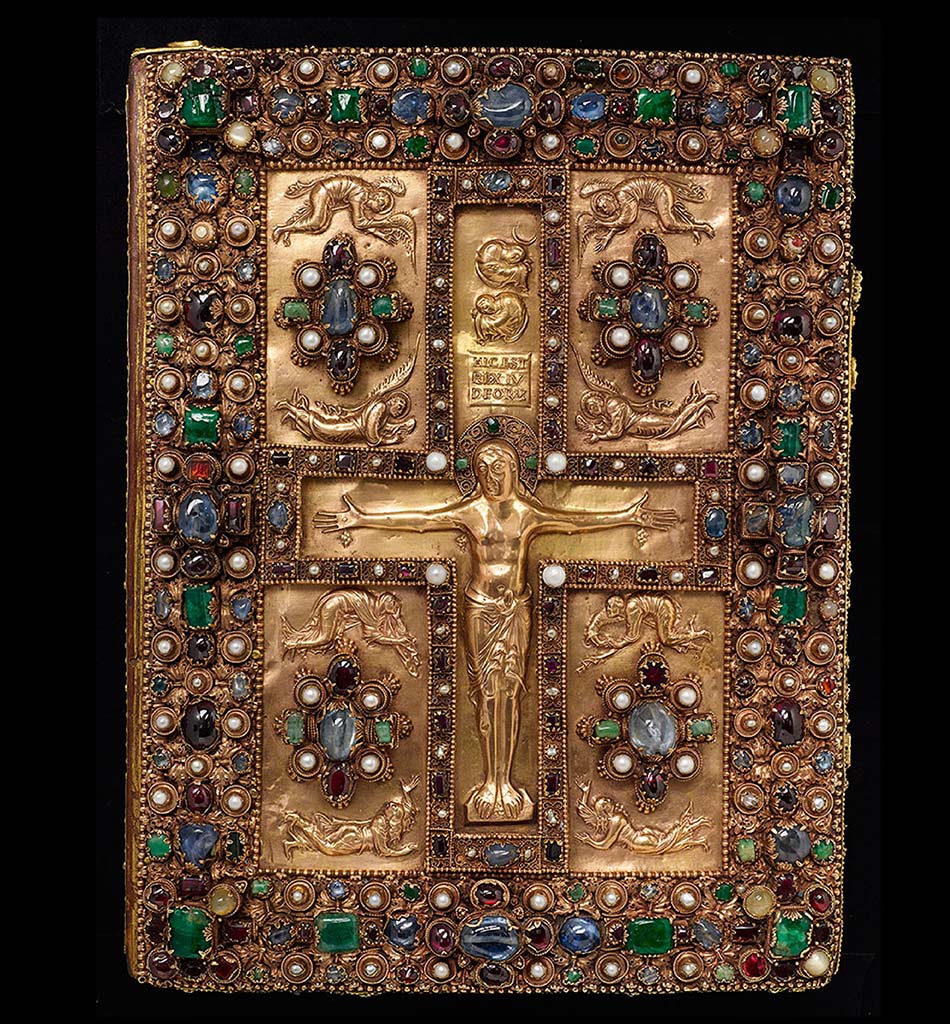 The Lindau Gospels, Back Cover 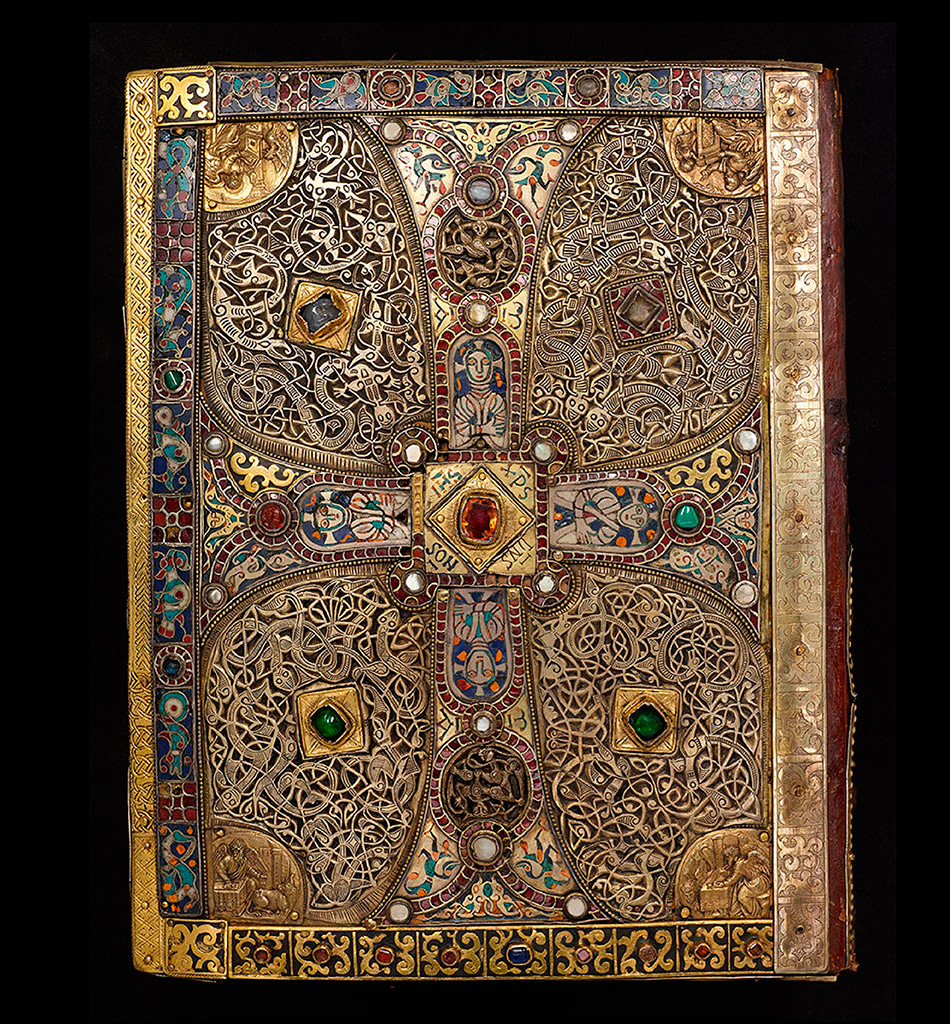 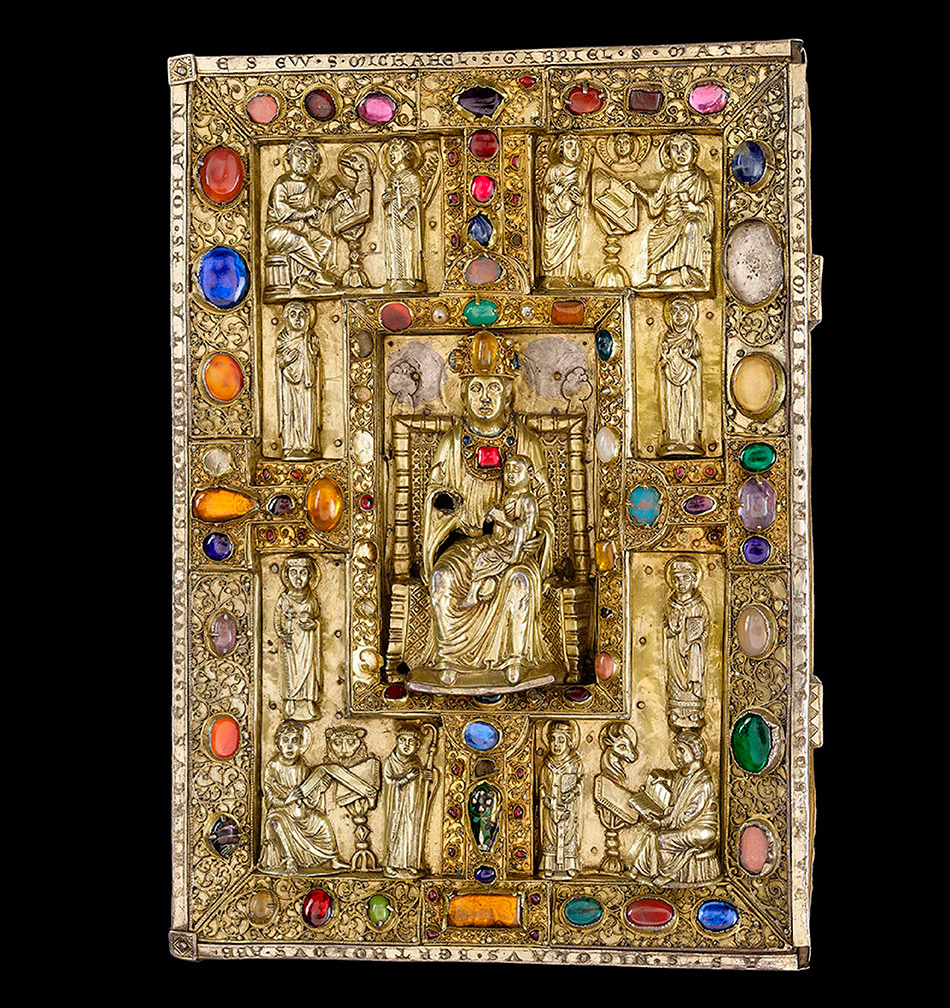 Gospels of Judith of Flanders

ca. 1060. Jeweled cover with silver-gilt repoussé figures of Christ in Majesty and the symbols of the four evangelists, Continental work, last third of the eleventh century. In Latin; Canterbury, England, ca. 1060. Manuscript on vellum. Purchased by J. P. Morgan, 1926. 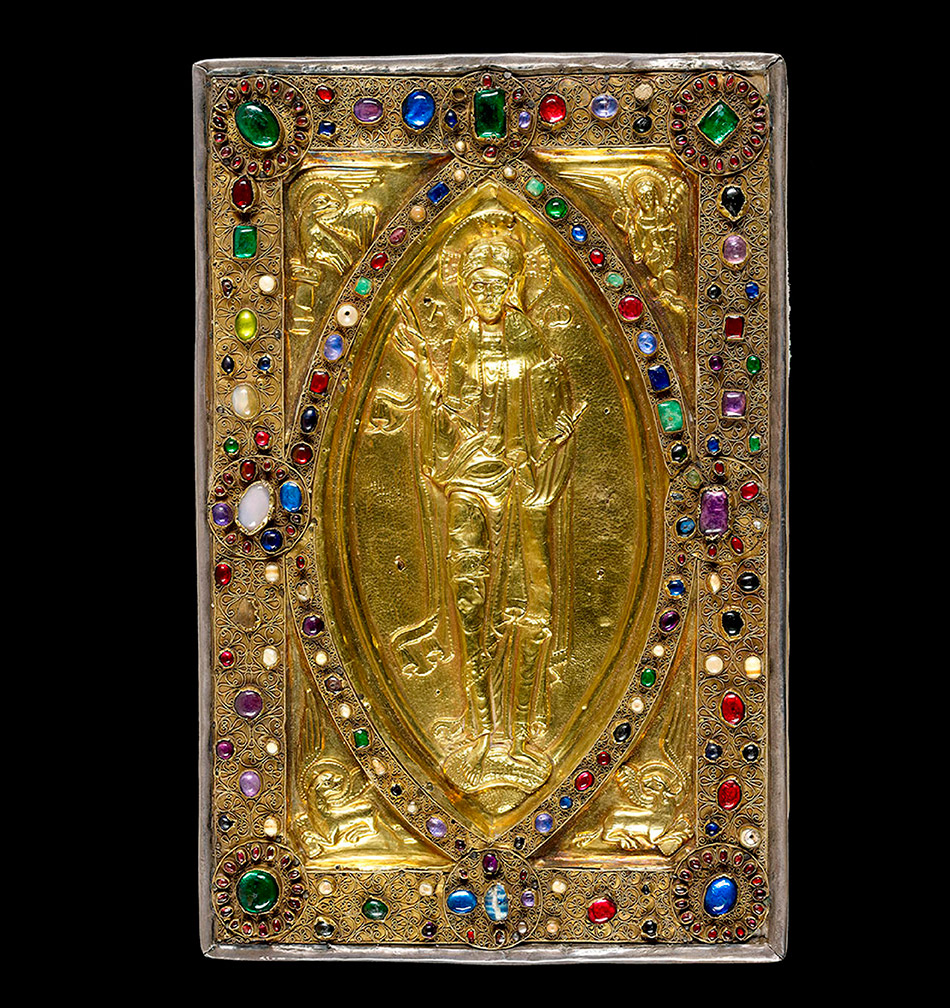 Gospels of Judith of Flanders

Between 1051 and 1064. Jeweled cover with cast figures of Christ in Majesty and the Crucifixion set against a silver-gilt filigree background with gems. Continental, perhaps Germanic, last third of the eleventh century. In Latin, England, for Judith of Flanders (1032–1094). Manuscript on vellum. Purchased by J. P. Morgan, 1926. 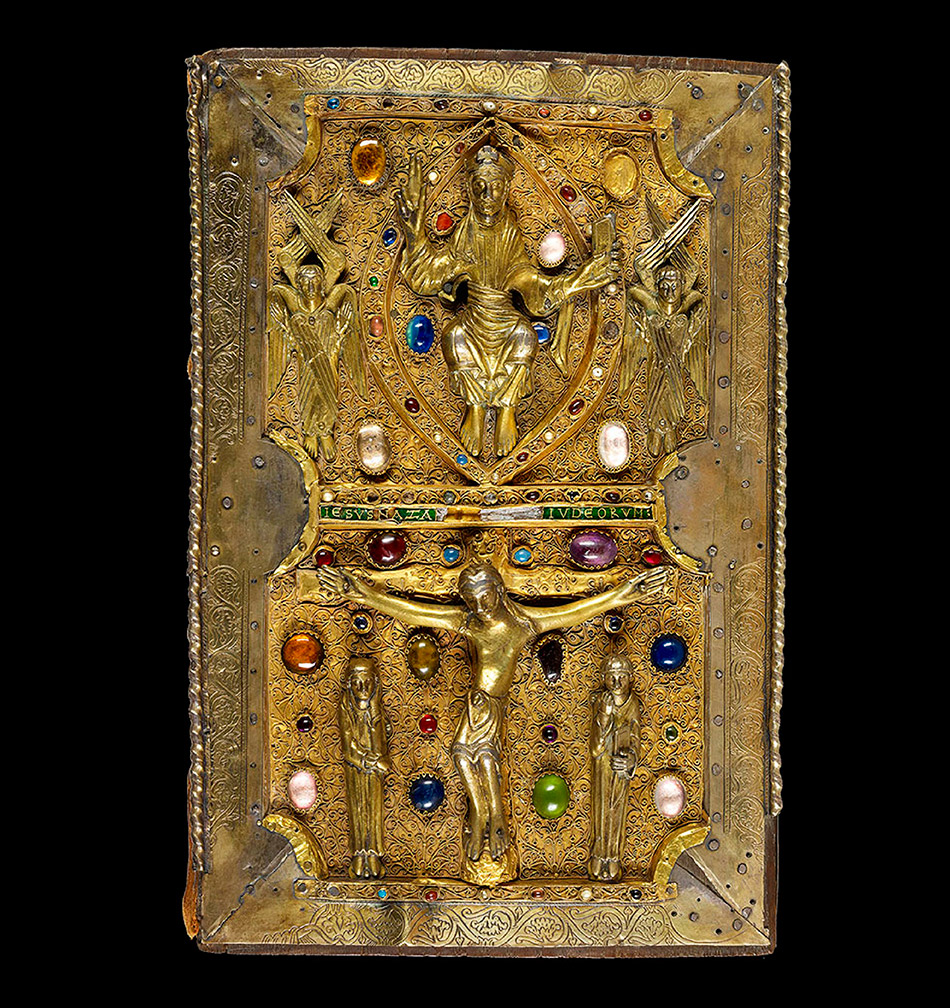 The Sacramentary of Frontale 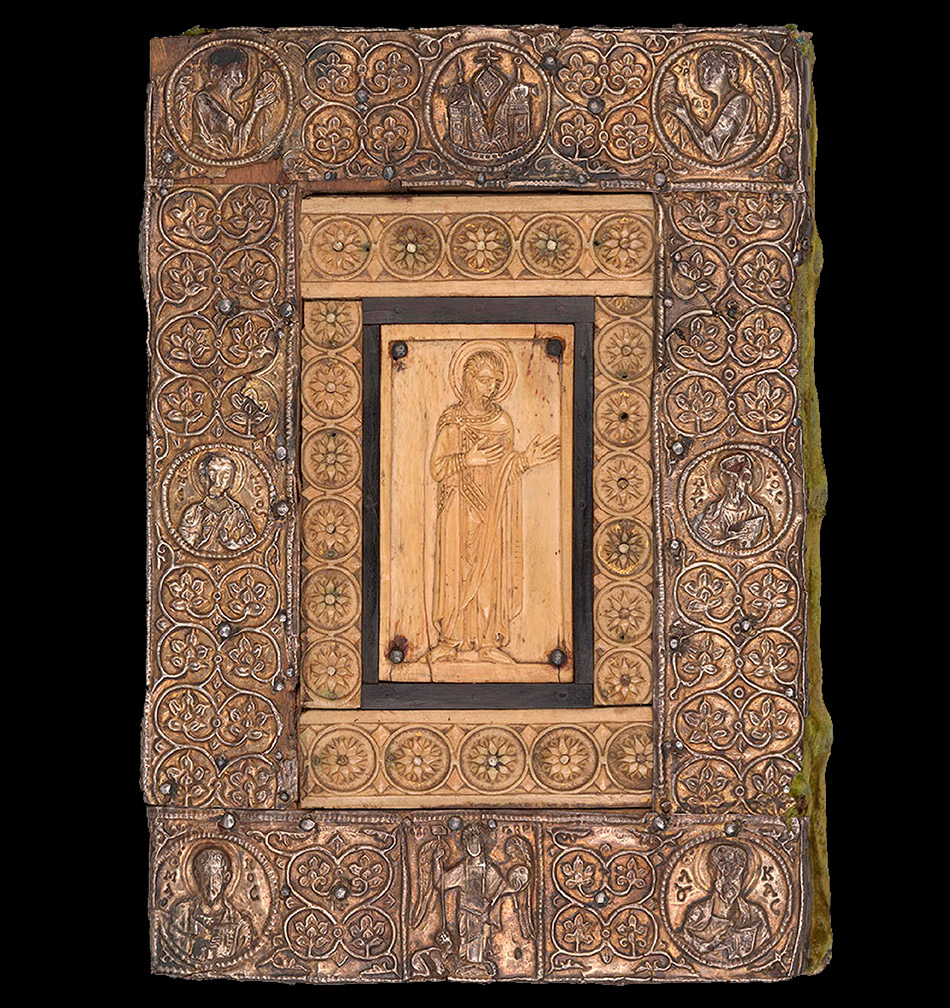 ca. 1700. Silver-repoussé and enamel cover with the Presentation of Jesus in the Temple, a small Annunciation at the bottom, and busts of the 24 prophets in niches, produced in the Kayseri silversmith workshop, ca. 1700. Gospel Book, in Armenian, Tokat, Turkey, 23 March 1700, written by Georg (Mik’ayel’s son) for Hrip ‘sime, who commissioned it in memory of her parents. Manuscript on paper. Purchased on the L. W. Frohlich Charitable Trust, in memory of L. W. Frohlich and Thomas R. Burns, in recognition of their interest and contributions to the art of the written word, 1998. 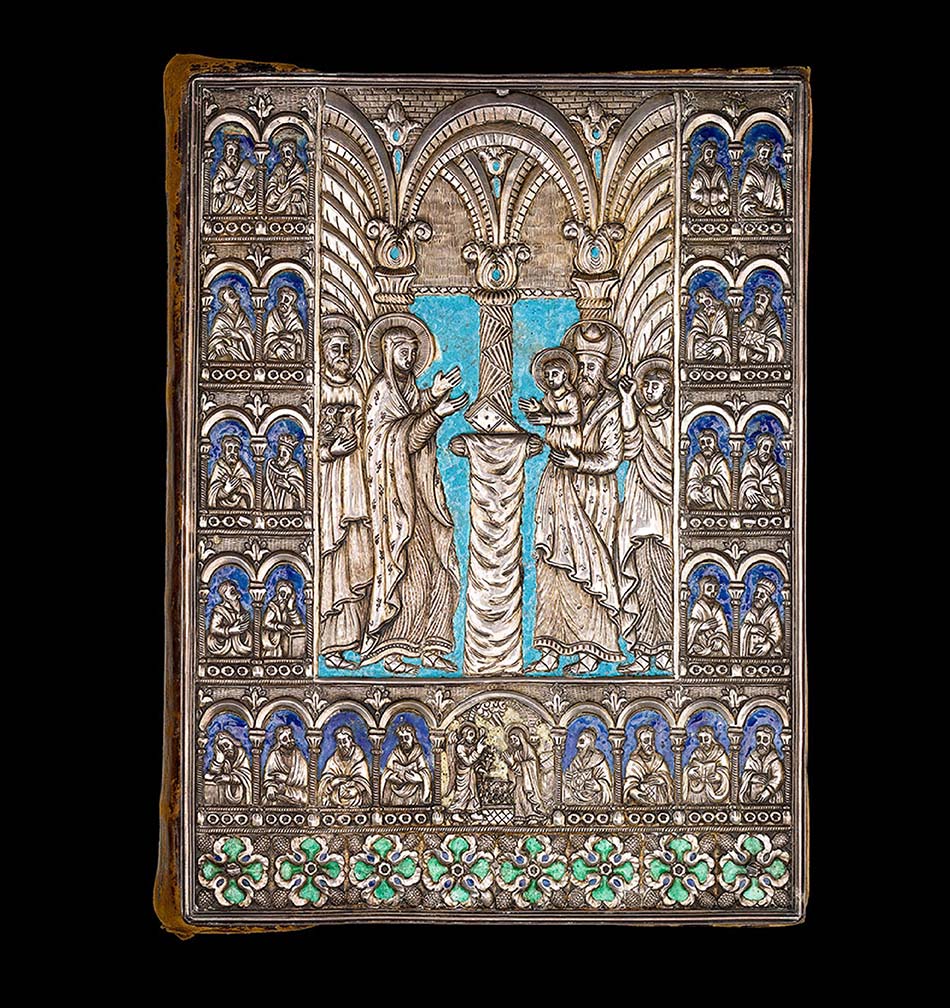 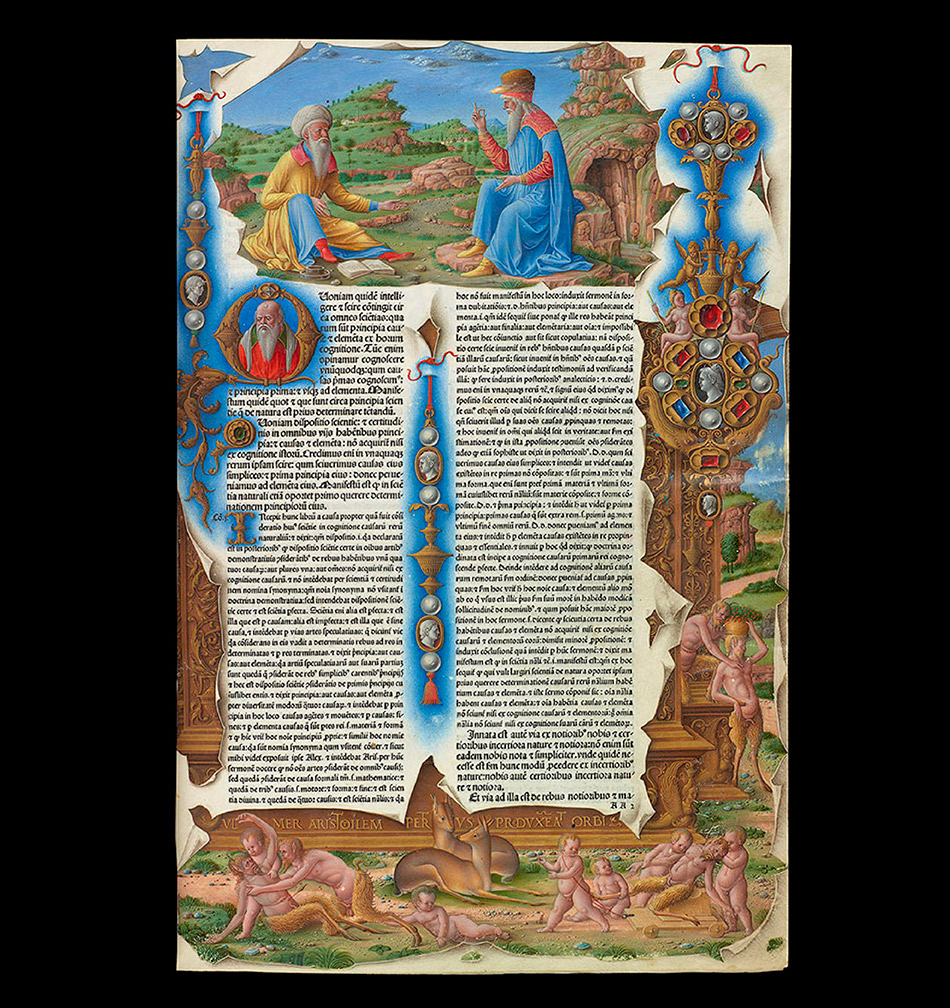 Vision of the Heavenly Jerusalem,  Beatus of Liébana 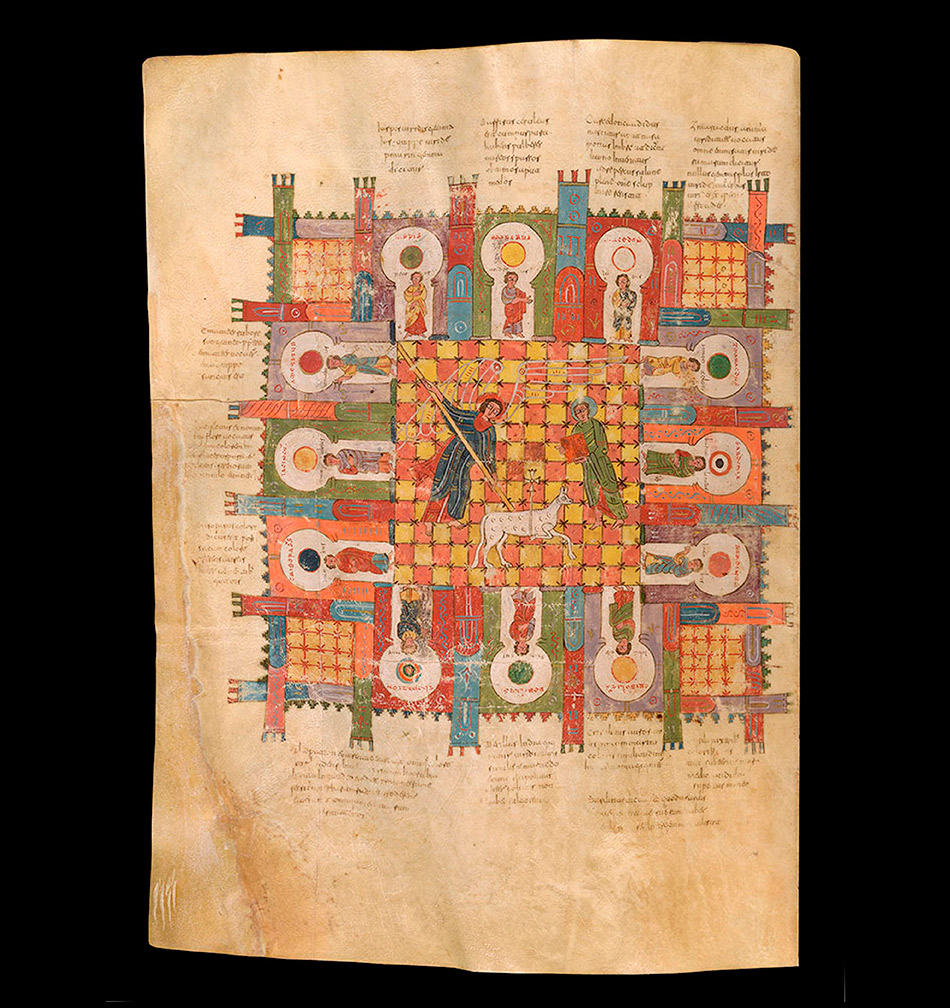 St. Luke Writing his Gospel and Painting the Virgin 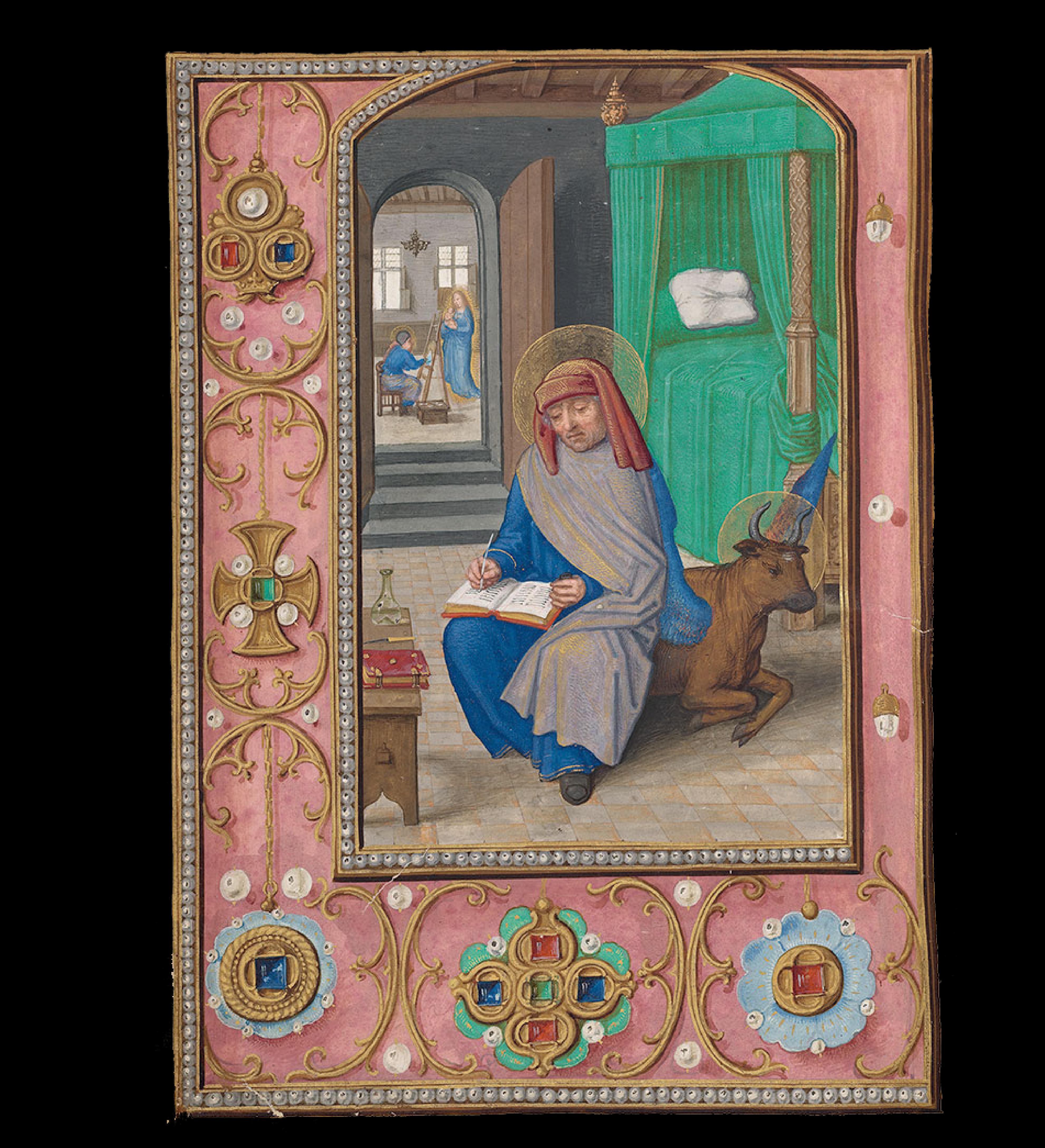 THE LINDAU GOSPELS INSIDE

The interior pages of the Lindau Gospels are also a jewel of calligraphy. With exquisite taste and mastery, calligraphers write one of the most brilliant periods in the history of design. 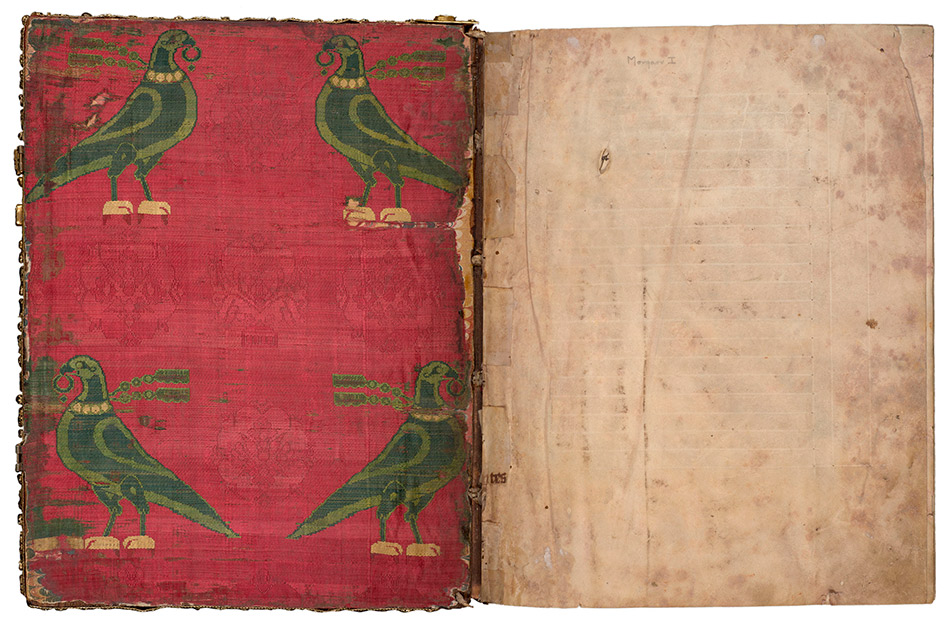 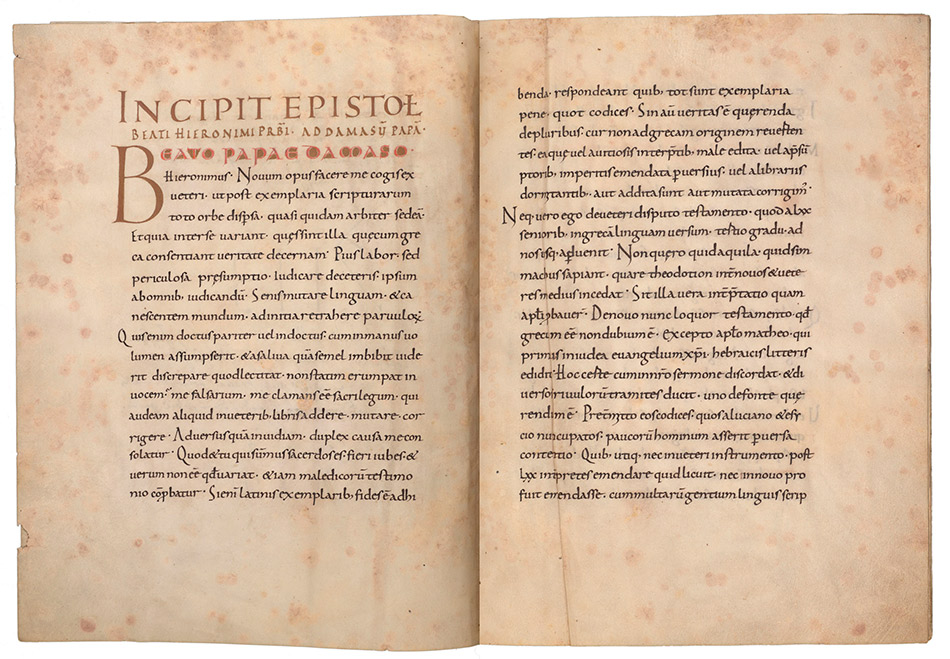 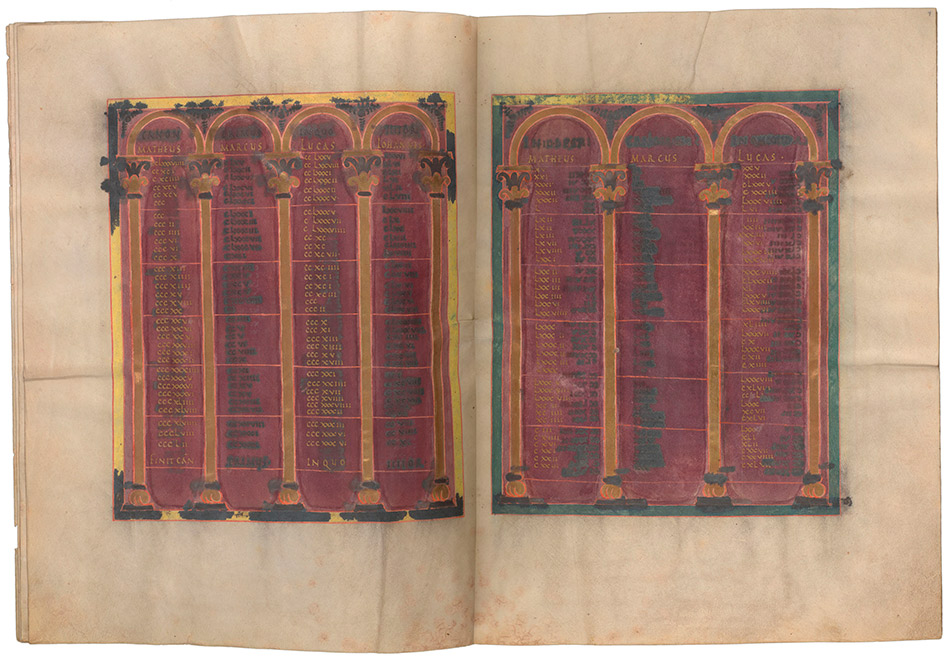 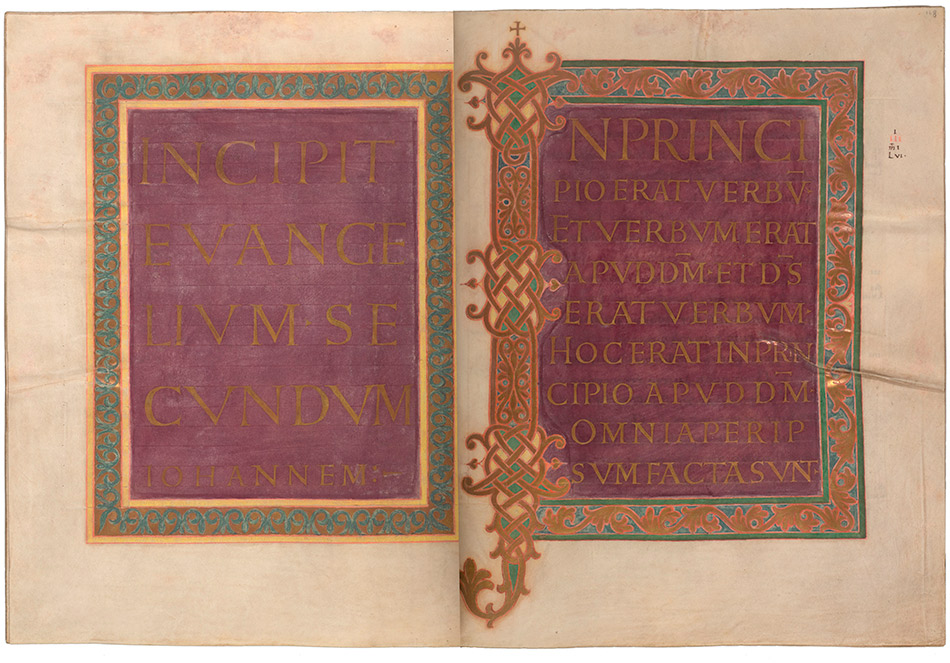 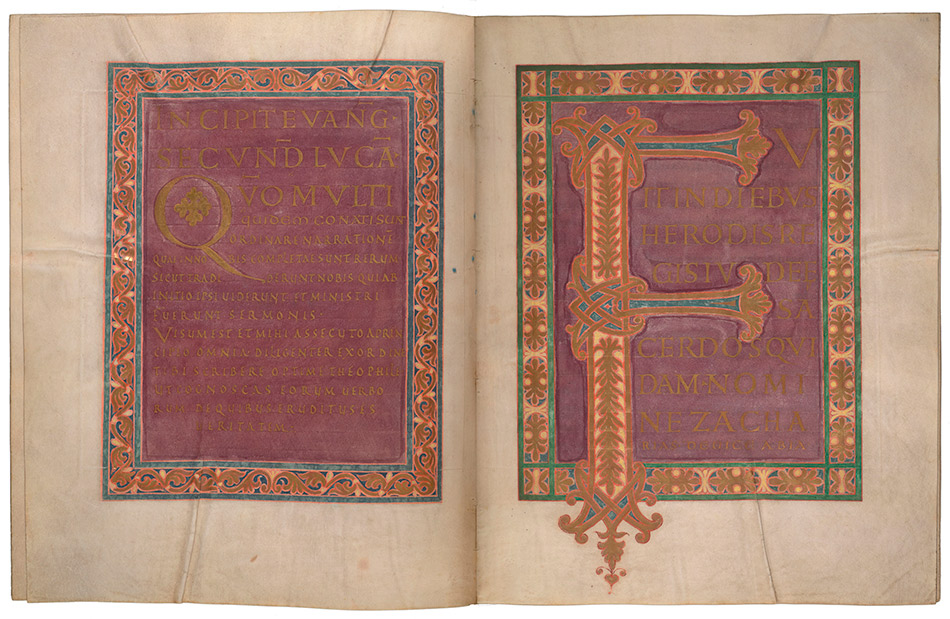 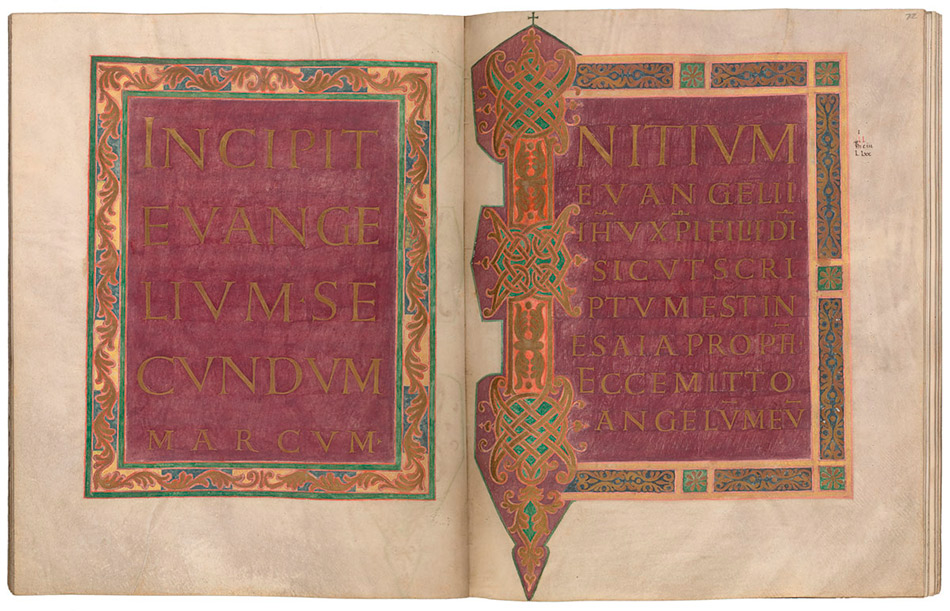 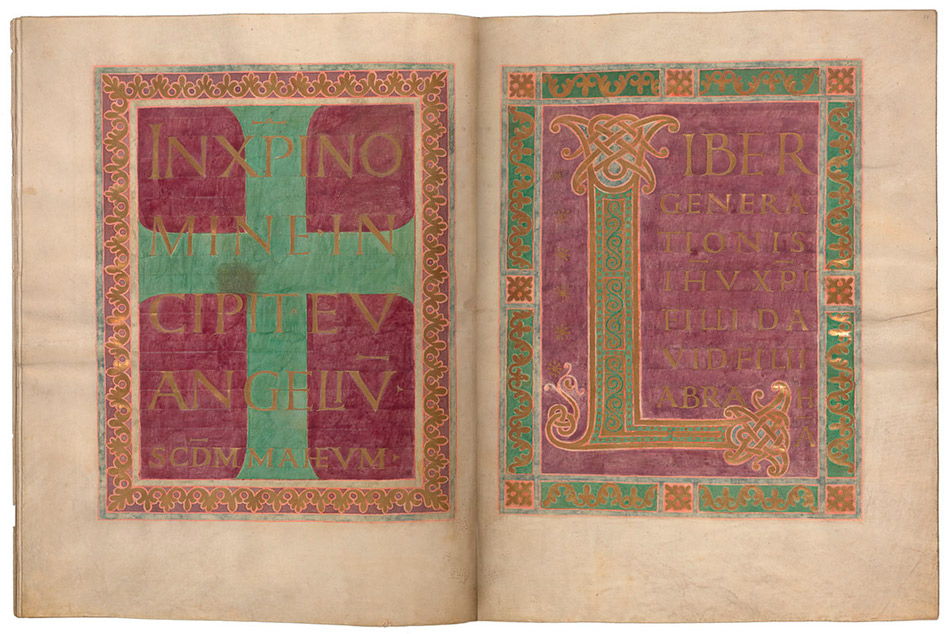 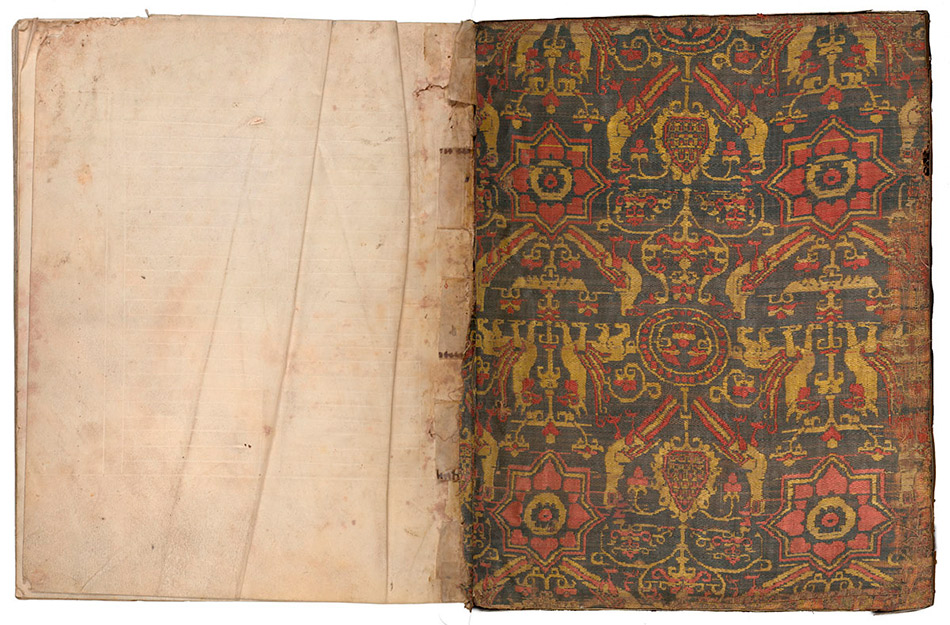 All pages of Lindau Gospels can be viewed at:
http://www.themorgan.org/collection/lindau-gospels/thumbs

THE ORIGING OF THE LINDAU NAME

Named after the Abbey of Lindau on Lake Constance (Germany), where it was once housed, the Lindau Gospels ranks as one of the great masterpieces from the collection of the Morgan Library & Museum. Its jeweled covers constitute one of the most important of all medieval treasure bindings. Quite unusually, the manuscript’s exquisite covers are in fact from entirely different regions and moments in time. Dating to the late eighth century, the back cover is the earliest component of the book and was likely made in the region around Salzburg (Austria).

The front cover, in contrast, dates to nearly a hundred years later (ca. 870–80) and was likely produced in what is today eastern France. The manuscript itself is later still (ca. 880–90), and was certainly written and illuminated in the monastery of St. Gall (Switzerland). At some unknown point in time, precious silks from Byzantium and the Middle East were attached to the inside covers of the manuscript, thus adding yet another layer of complexity to this fascinating object.

The manuscript itself contains the text of the four Gospels along with standard supplementary material, such as the prologues of Jerome, prefaces for each of the Gospels, chapter listings, and twelve richly illuminated canon tables. Clearly inspired by textile designs, the two decorative pages that frame the manuscript’s canon tables, are a particularly unusual feature of the manuscript’s illumination. Nothing quite like them exists in any other manuscript from the period.

Although the Lindau Gospels lacks portraits of the evangelists, as do several other examples of gospel books from St. Gall, the beginnings of the four Gospels are nevertheless distinguished through sumptuous double-page spreads, which feature the opening words of the respective Gospel text. As many as seven different scribes were engaged in the copying of the texts, and it is thought that a monk named Folchart—one of St. Gall’s preeminent artists—was personally responsible for some of the manuscript’s illuminated pages.

THE BERTHOLD SACRAMENTARY INSIDE

Most of the twenty-four full-page miniatures are by an exceptionally forceful and expressive artist who has been named the Master of the Berthold Sacramentary, after this book. The richly applied gold leaf is mirror-like, and the original curtains placed over the miniatures and the initials to protect the gold leaf are still sewn in the manuscript. 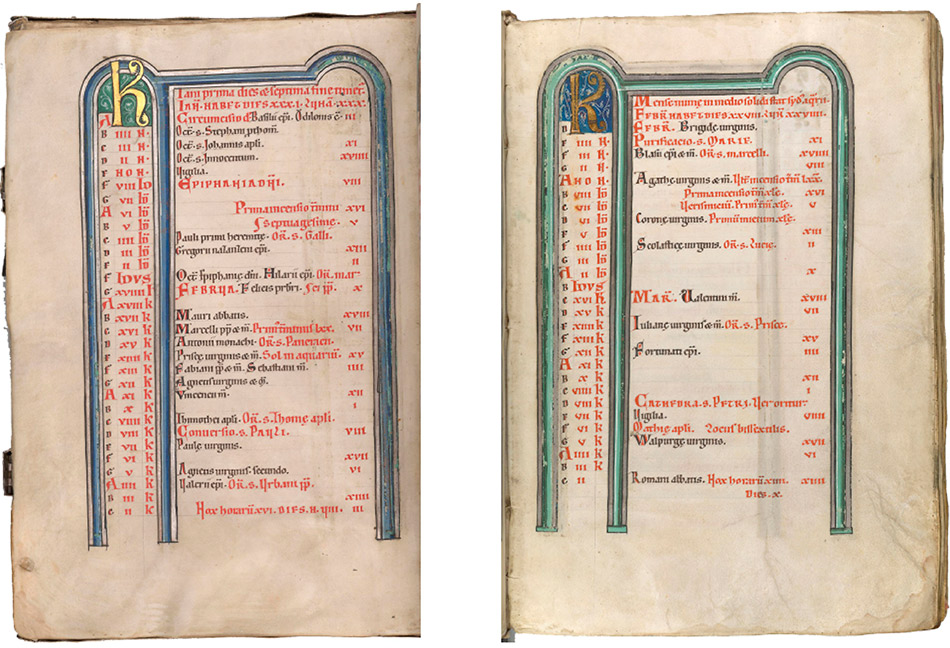 From the Orto Missae
Left page: “The Crusifixion” 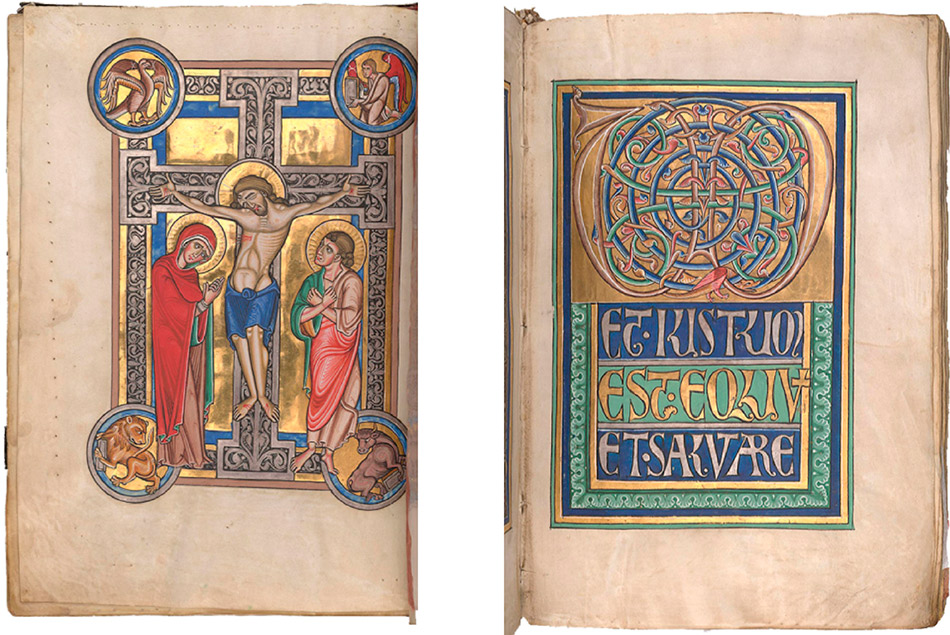 From the Orto Missae 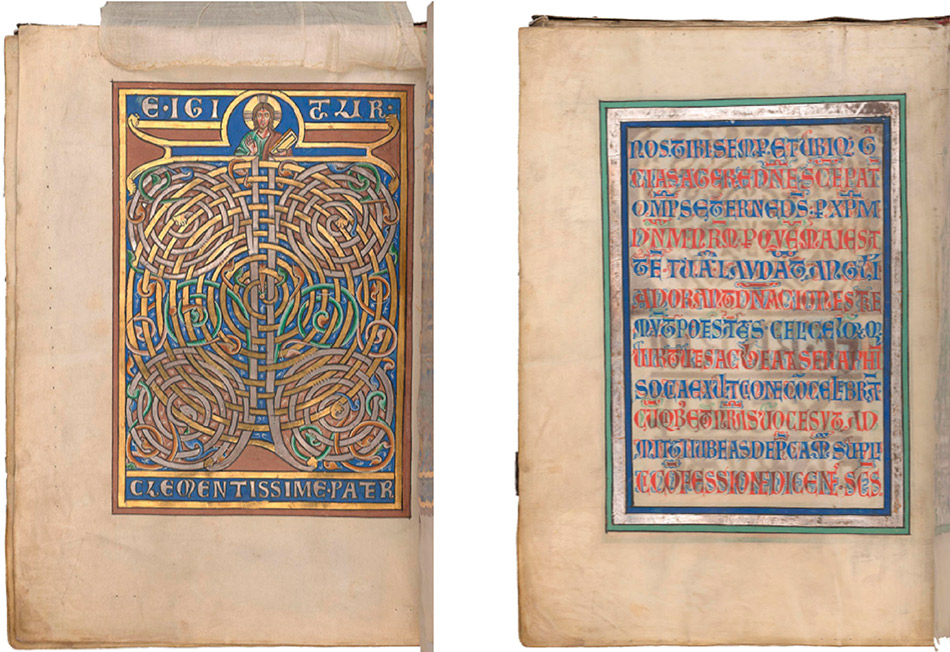 From Temporale
Right page: “The Ascention” 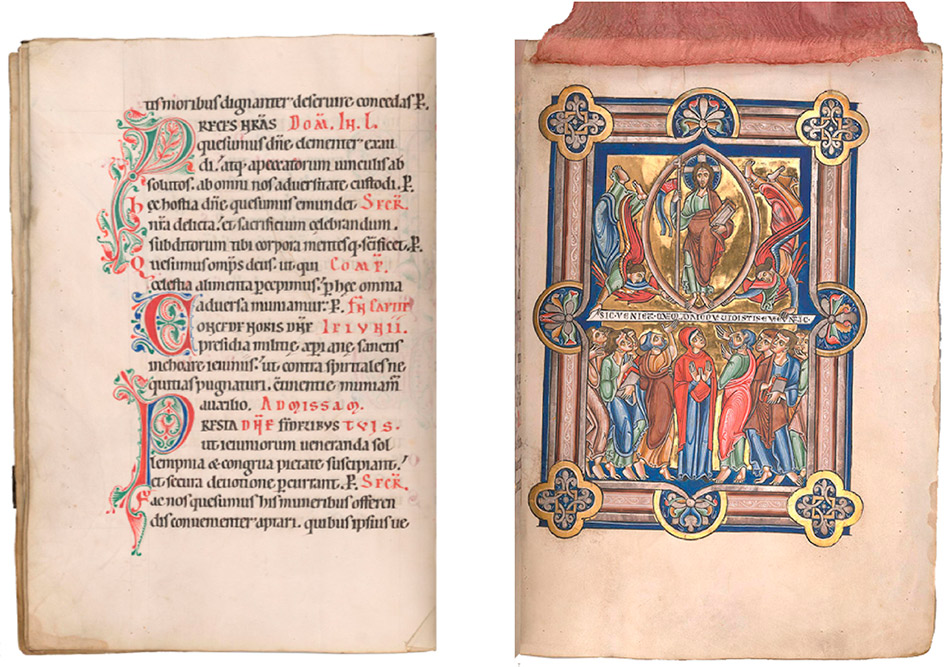 From Temporale
Left page: “The Last Supper”      Right page: “The Nativitiy and the Annunciation to the Shepherds” 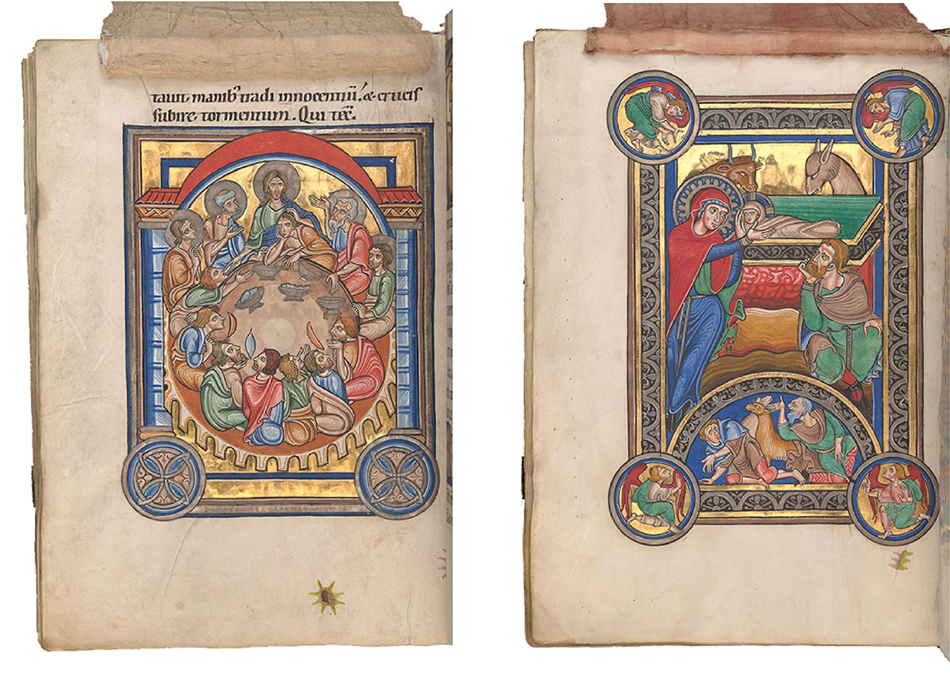 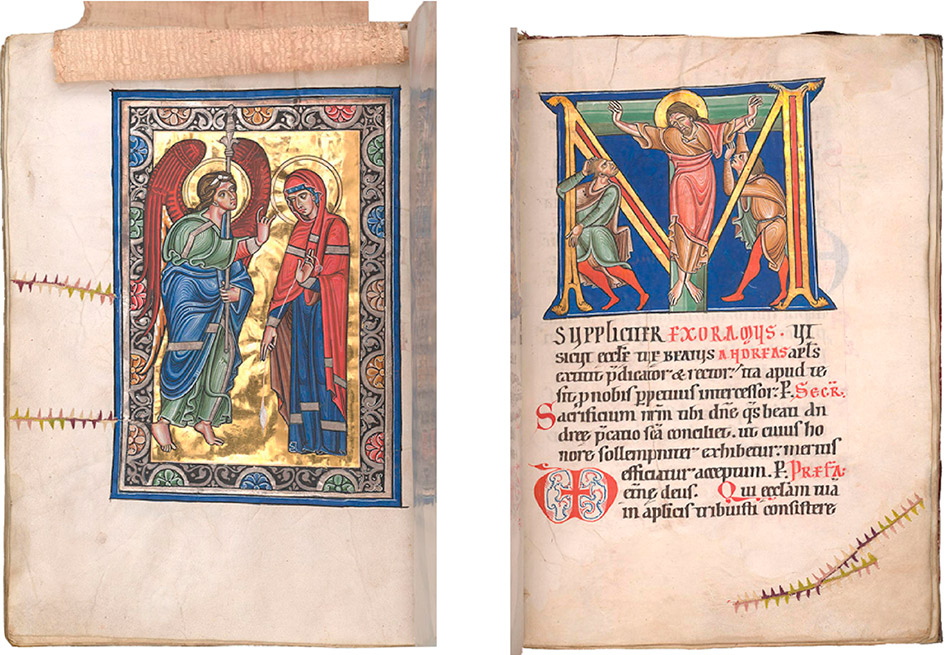 From the Santorale
Left: “Presentation in the Temple”      Right: “The Martyrdom of St. Lawrence, silk lifted” 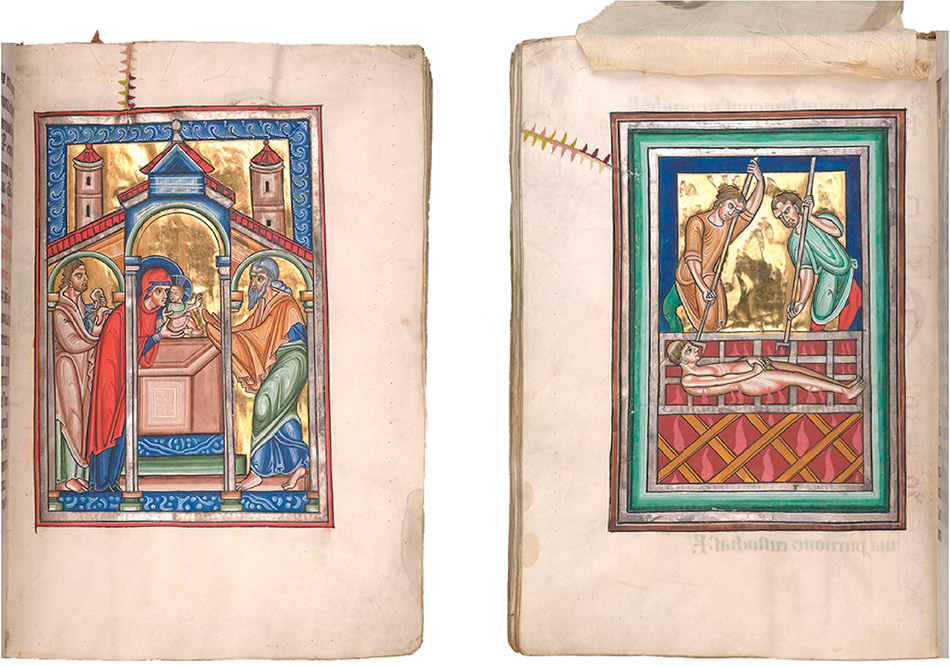 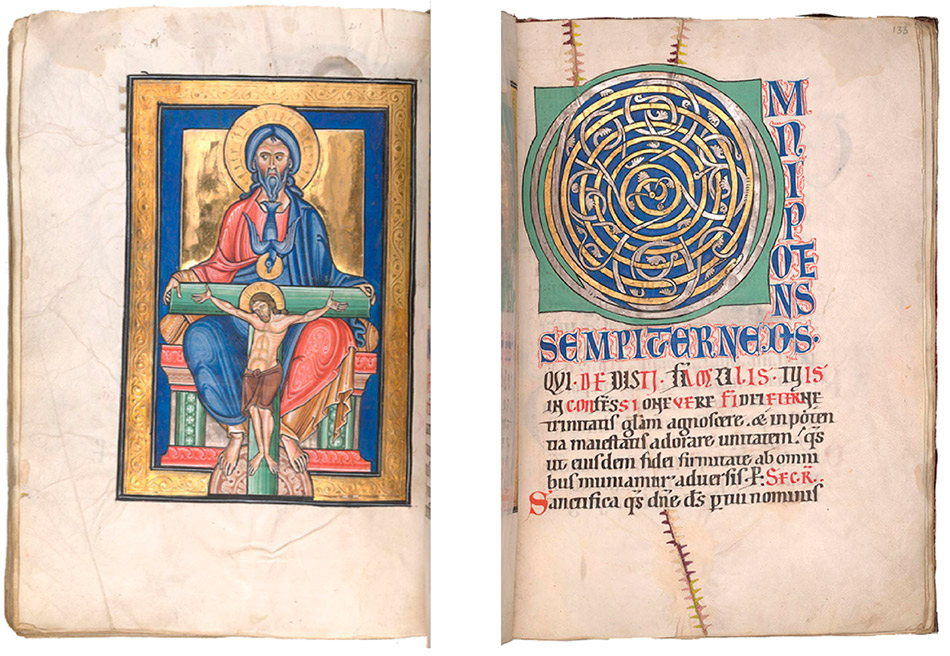 All pages of Berthold Saracramentary can be viewed at:
http://www.themorgan.org/collection/berthold-sacramentary/thumbs

THE ORIGING OF THE BERTHOLD NAME

The Berthold Sacramentary is named after Berthold, the abbot of Weingarten from 1200–1232 who commissioned it.  From every point of view the codex (ca. 1215–17)—whether for its cover, illuminations, or even script—is the masterpiece of Weingarten illumination. It is also the most luxurious German manuscript of the time and a major monument of Romanesque art.  Although the manuscript was formerly known as the Berthold Missal it is, in fact, a Sacramentary. Unlike the Missal (which has all of the texts recited by the priest at Mass), the Sacramentary contains only those for the celebrant of high Mass. The book still retains its original jeweled binding, which includes representations of the abbey’s patron saints (Martin and Oswald) and Abbot Berthold himself.

Magnificent Gems: Medieval Treasure Bindings is made possible by Caroline S. Bacon, Elizabeth A. R. and Ralph S. Brown, Jr., Salle Werner Vaughn, and other members of the Visiting Committee to the Department of Medieval and Renaissance Manuscripts, the B. H. Breslauer Foundation, and Susanna Borghese.